Patrik Schick's four goals in four matches for the Czech Republic have made him an unlikely contender for the Golden Boot at Euro 2020.

In 1976, Czechoslovakia became European Champions after Antonin Panenka unveiled his audacious dinked penalty – imitations of which still bear his name to this day.

Karel Poborsky's sensational scoop sunk Portugal as the Czech Republic charted an unlikely course to the final of Euro 96.

Such heroics secured Poborsky a dream move to Manchester United and a handful of Premier League clubs have reportedly had their attention piqued by Patrik Schick's exploits at Euro 2020.

Schick's sensational goal from halfway, part of a brace in the 2-0 win over Scotland at Hampden Park, will remain one of this tournament's enduring moments, but it was no flash in the pan.

The Bayer Leverkusen striker slotted home to seal an assured last-16 win over the 10-man Netherlands, moving on to four for the competition.

With Cristiano Ronaldo (five), Emil Forsberg, Karim Benzema and Romelu Lukaku (all four) having packed their bags, Schick has a chance to further boost his Golden Boot prospects in Saturday's Baku quarter-final against Denmark.

It would see him emulate another of his country's footballing heroes, the Euro 2004 top scorer Milan Baros, and burnish a reputation that has taken a battering over recent years.

From Samp star to Roman ruin

In 2017, Schick was on the brink of the sort of dream move Poborsky secured two decades earlier.

A stunning breakout season at Sampdoria in 2016-17, where he scored 13 goals in 35 appearances in all competitions – only 15 of which were starts - captured the attention of Juventus.

The clubs agreed a fee in the region of €25million and Schick was even pictured on Juve's website in club training kit for a medical, but that was where the problems started. 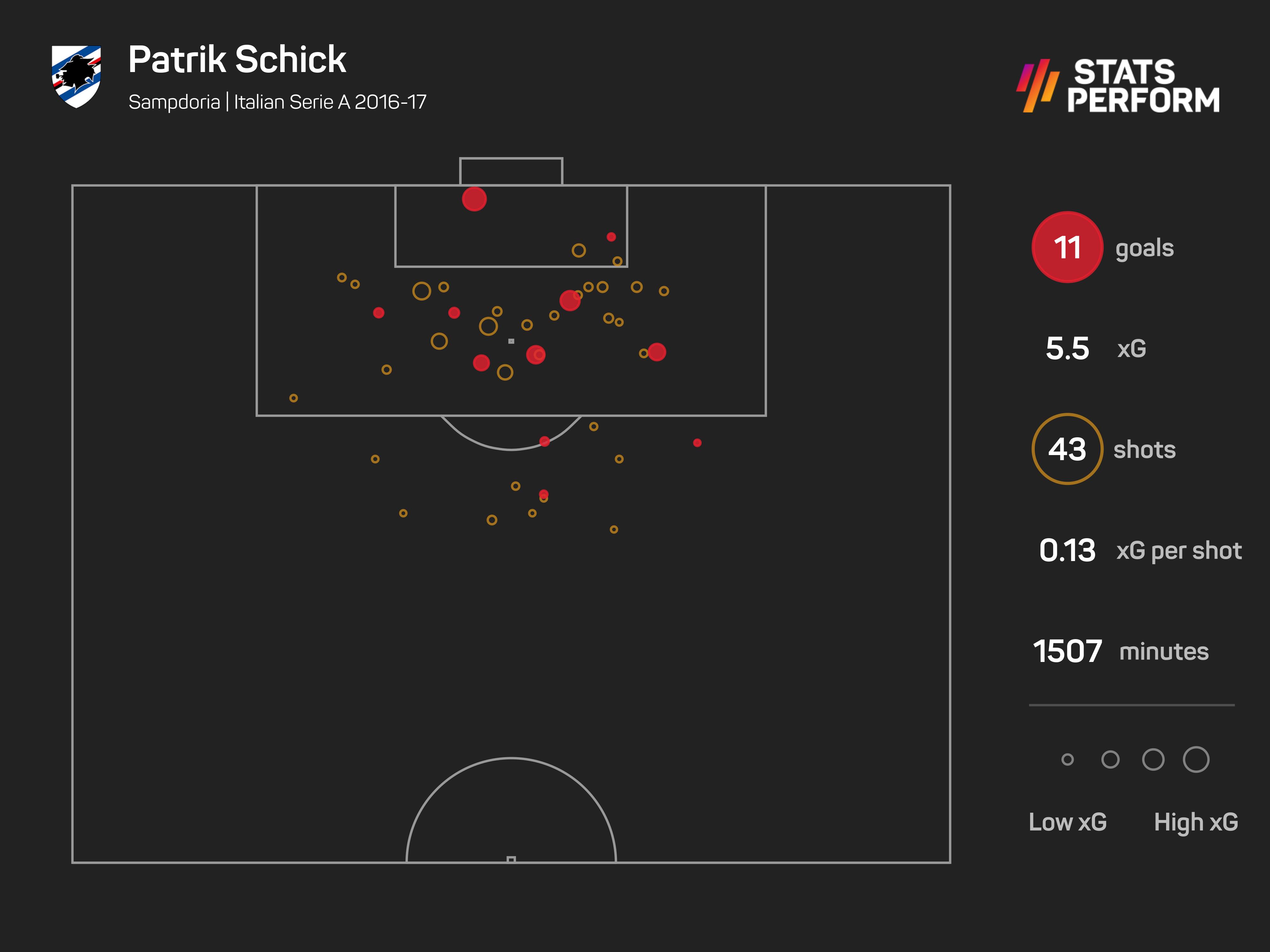 Juventus pulled out of the deal, amid speculation that tests had uncovered cardiac problems. This was dismissed as "a farce" by Sampdoria owner Massimo Ferrero and, after Roma stepped in to take Schick off their hands, further examinations gave the forward the all-clear.

However, Juve's loss did not become Roma's gain as Schick failed to reproduce his Sampdoria form.

"Do I wonder what might have been? No, I've already closed it out," he told Czech newspaper Lidovky in June 2018, but his output on the field in his debut season at the Stadio Olimpico told a different story.

Schick scored just three goals in all competitions as he struggled to dislodge first-choice striker Edin Dzeko and was often shunted out to the right wing. His shot conversion rate plummeted from 28.9 per cent at Samp during the previous campaign to 8.1 in 2017-18.

Rebuilding in the Bundesliga

RB Leipzig took Schick on a season-long loan and across all competitions in 2019-20, as the Bundesliga club reached the semi-finals of the Champions League, he scored 10 times in 28 appearances (18 starts).

It was a solid if unspectacular return, but a huge step in the right direction and one that meant Roma were able to make their money back as Schick joined Bayer Leverkusen on a five-year deal ahead of last season.

His rehabilitation continued impressively at the BayArena, hitting 13 goals for the first time since he came to prominence at Sampdoria four seasons earlier.

According to Opta, Schick's big chance conversion rate was up to 40.9 per cent, having dwindled at 33.3 in his post-Samp years. A total of 32 chances created for team-mates was his best in the top-five leagues. 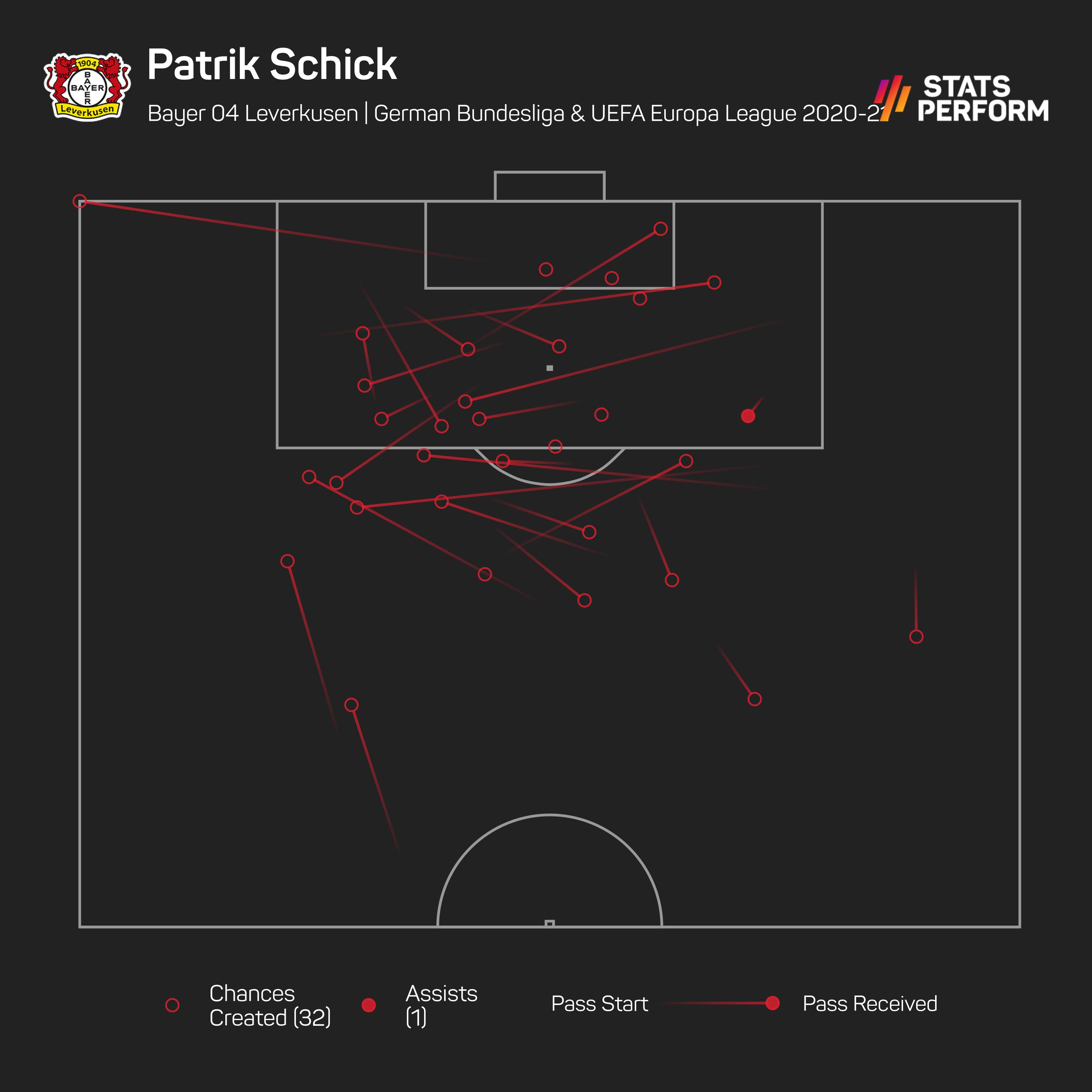 It laid the foundation for a stunning Euro 2020 so far, where the variety of Schick's goals has caught the eye.

His showstopper against Scotland was preceded by a fine, towering header. He kept his nerve from the penalty spot against Croatia before coolly converting after Tomas Holes' run scattered a tiring Netherlands.

This body of work leaves Schick in contention for his own piece of history. He is one shy of Baros' five-goal haul, which included a quarter-final brace against Denmark that he would dearly love to emulate.

Indeed, in Euros 80, 92, and 2012, Schick's haul would already have been enough to take home the Golden Boot, with the joint-top scorers in each of those tournaments scoring three apiece.

He and everyone else at Euro 2020 remains some way short of Michel Platini's nine goals as France tasted glory on home soil in 1984 – a feat made all the more remarkable by the fact the championship was only a five-game tournament back then.

A more realistic target for Schick and this year's frontrunners is Antoine Griezmann, who scored six in seven matches as France plotted a path to the final of Euro 2016, the first time the present 24-team format was used.

Schick averages 1.1 goals per 90 minutes after spending 326 minutes on the field in total. This marks a slightly better frequency than Griezmann (0.97) four years ago. Indeed, only Marco van Basten (1.16 - five goals in 389 minutes at Euro 88), Baros (1.17) and Platini (1.69) have a better scoring rate. If we dismiss Platini as something of a freakish outlier, Schick is on Golden Boot form. 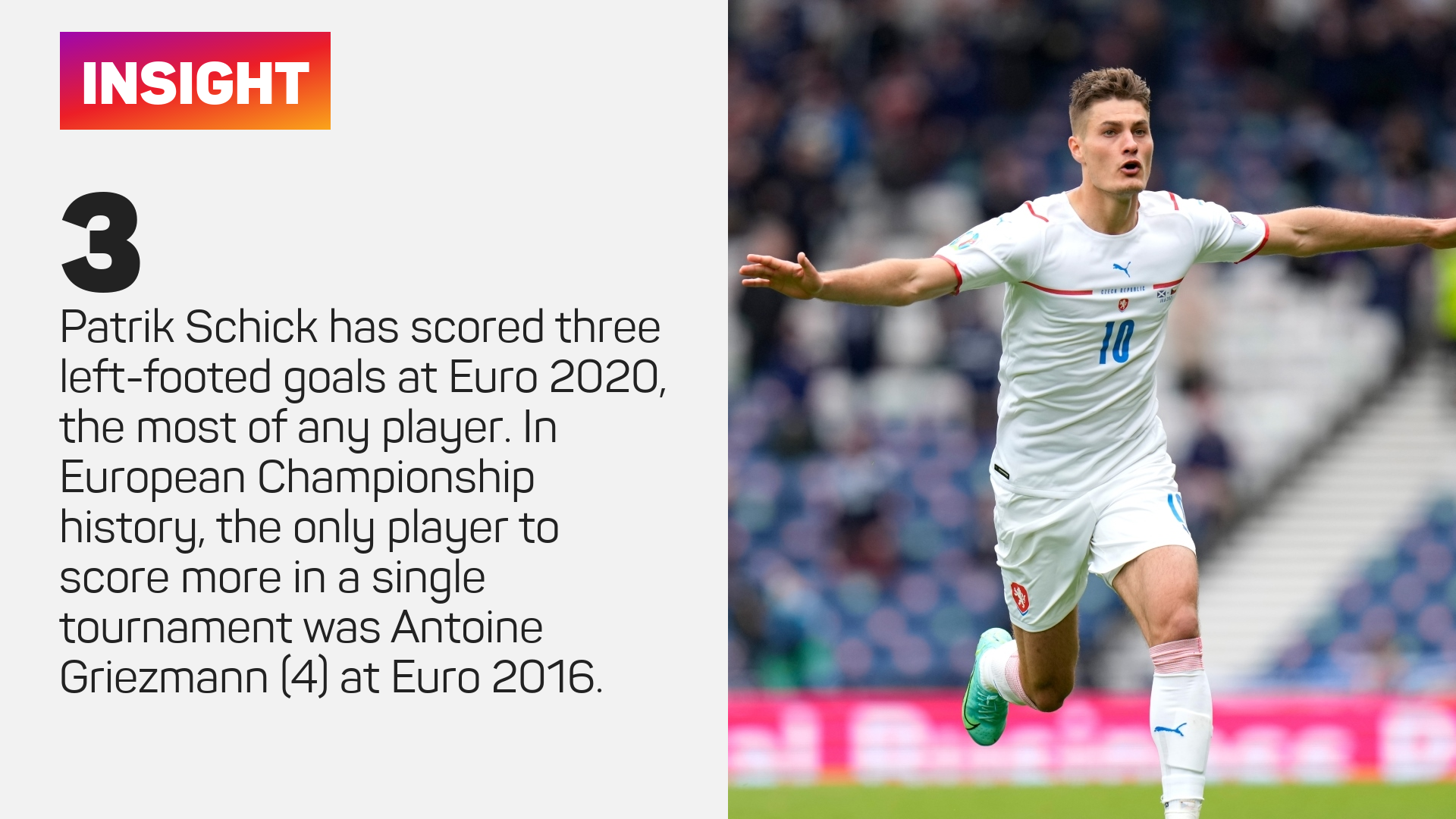 A challenge at this business end of the competition for those not playing in teams likely to dominate the action is how many shots their main goal threats are able to get away.

Ronaldo had 37 shots for three goals (6.94) during Portugal's 2012 campaign, while David Villa – in a Spain team hardly noted for indiscriminately peppering the opposition goal – averaged 4.57 per 90 en route to glory at Euro 2012.

Such a volume of opportunities are unlikely to fall Schick's way on Saturday. But whether they come aerially, in the penalty area or from distance, a player in prime form at the perfect time after a long road back to his best looks ready to capitalise.

Despite continued interest from Arsenal in James Maddison, Brendan Rodgers remains confident he will keep the midfielder in Leicester.