Croatia v Spain: Luis Enrique must look to the attack to avoid another last-16 exit

Spain underperformed in front of goal in the group stage but, after thrashing Slovakia, could another emphatic win over Croatia follow?

Spain will look to end a run of falling at the first hurdle in the knockouts of a major tournament when they face Croatia in the last 16 of Euro 2020.

A 5-0 thrashing of Slovakia sent La Roja through in second place in Group E after draws with Sweden and Poland had left their chances of progressing in doubt.

Croatia, meanwhile, were 3-1 winners over Scotland on matchday three, ensuring they followed England in escaping Group D to secure a spot in the knockout phase for the fourth time in six European Championship appearances.

They have never progressed beyond the first round after the group stage, while Spain's recent form in the latter rounds of tournaments has also been poor: after winning Euro 2008, the 2010 World Cup and Euro 2012, they were eliminated at this stage of both Euro 2016 and the 2018 World Cup.

Their previous meeting with Croatia ended in a 3-2 defeat in November 2018 in the Nations League, but coach Luis Enrique would do well to be inspired by the match two months earlier when Spain romped to a 6-0 victory. So too would his forwards.

Spain had a higher expected goals total than any other side in the group stage (8.8), but scored only six times. In fact, the players to underperformed the most based on xG over the first three matchdays were Gerard Moreno (zero goals from 2.1 xG) and the much-maligned Alvaro Morata (one goal from 2.9 xG).

Scoring goals is certainly not a worry for Marcos Llorente, who told AS: "In the first two games, we got a bit stuck with in front of goal, but we've already seen we're capable of creating many chances, even for opponents who sit back.

"We did so and we lacked effectiveness in the first two games, and in the last one, we had it. It was a good victory." 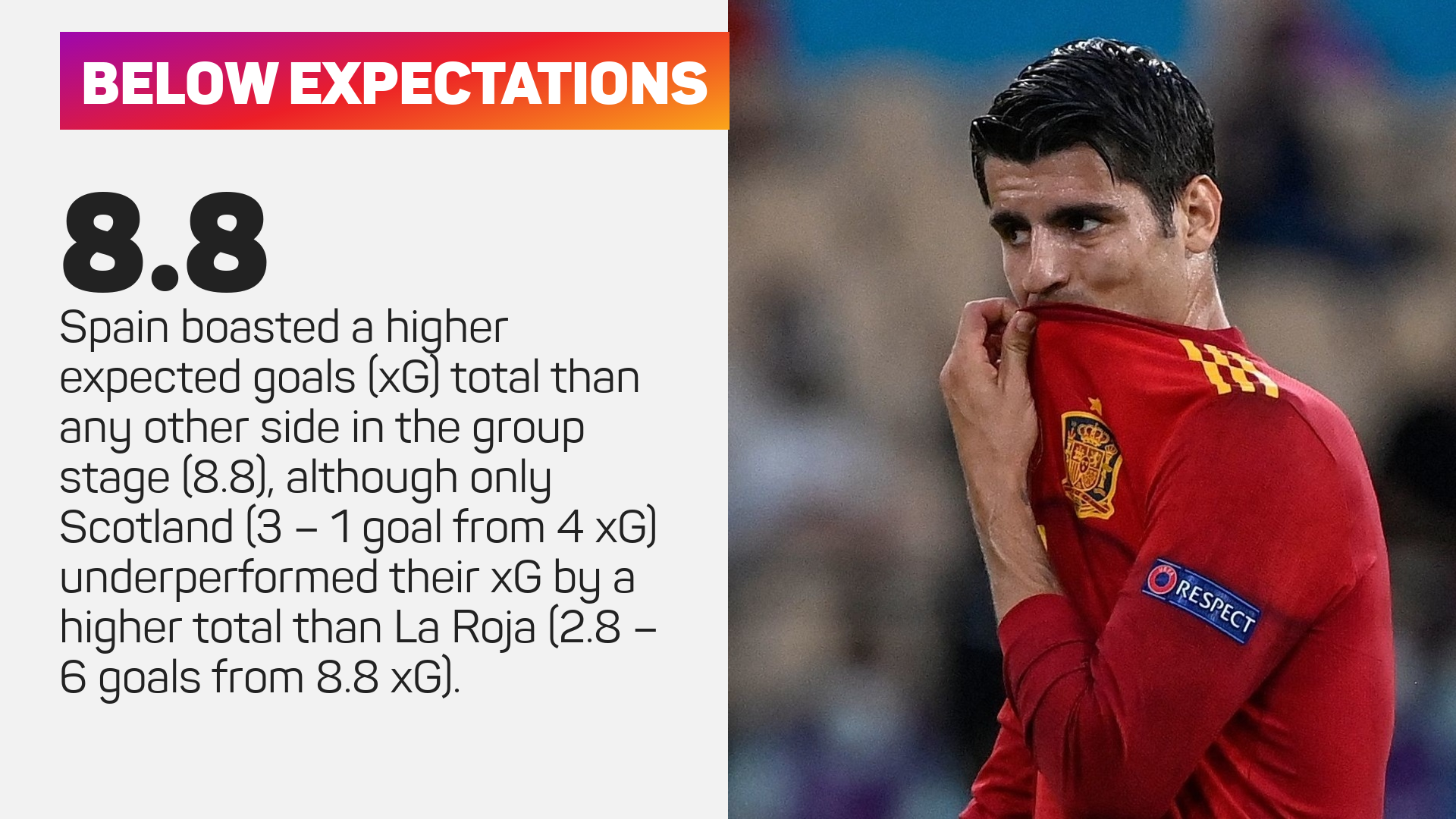 With Ivan Perisic - who scored one and set up another against Scotland - missing after a positive COVID-19 test, there is great pressure on the rest of the Croatia attack to perform.

Rebic is most likely to replace Perisic in the line-up and, while the Milan forward is far from prolific for his country, his work rate at the very least could be key to disrupt Spain's rhythm.

It would be wrong to claim the return of Busquets was the reason Spain suddenly found their goalscoring groove against Slovakia, but it is certainly true that there was more purpose to their possession play with the Barcelona man in the middle.

Against a midfield of the strength and experience of Croatia's, Busquets could be critical to La Roja's plans when it comes to keeping the ball and warding off counter-attacks.

- This will be Croatia and Spain's third major tournament meeting, with both previous such clashes coming in European Championship group stages. Both sides won once each: Spain in 2012 and Croatia in 2016.
- Spain forced more pressed sequences (sequences where the opposition has three or fewer passes and the sequence ends within 40 metres of their own goal) than any other side during the Euro 2020 group stages (60), while their average of eight passes allowed per defensive action was the lowest by any side in the round.
-All six of Spain's goals in the group stage were scored by different players, including two own goals. Indeed, Spain were the highest scoring side in the round not to see a player score more than once.
- Last time out against Scotland, Luka Modric became the oldest player to score for Croatia at the Euros (35 years and 286 days), while he also holds the record as the youngest goalscorer for his nation in the competition (22 years and 73 days versus Austria in 2008). Should he score in this game (aged 35 years and 292 days), he would become the second-oldest player in European Championship history to score in consecutive appearances in the competition, after Cristiano Ronaldo.

Brazil will meet Mexico in the Olympics semi-finals, while Spain's remarkable win over the Ivory Coast set up a clash with Japan.

Luka Doncic excelled again as Slovenia won, setting up a huge showdown with Spain in the battle to top Group C.

Dani Ceballos is looking forward to the Tokyo Olympics with Luis de la Fuente, a coach he enjoyed working with for Spain's Under-19 side.

Damian Lillard and Kevin Durant top scored for the United States who ended their dramatic Tokyo Olympic preparations with a good win.