Harry Kane has not hit his usual heights so far this season and faces Chelsea next on Sunday.

Slow starts are nothing new to Harry Kane. Not until 2018 did the England captain score a Premier League goal in the month of August, by which point he had twice won the Golden Boot.

But there is added focus on Kane this year in the aftermath of his failed move from Tottenham to Manchester City.

And through three appearances – including two starts – in the opening four games of the 2021-22 campaign, the striker has attempted just two shots without scoring.

The last time Kane had two or fewer attempts across a three-match span in the Premier League was back in October 2014, but he did not start any of those outings against Sunderland, Southampton and Newcastle United, which produced a sole effort combined.

Since establishing himself as one of Europe's elite forwards, Kane has not endured such a lean league spell.

Chelsea, against whom Kane has scored just once in his past eight Premier League encounters, are up next, with a more effective display clearly required from Tottenham's talisman. 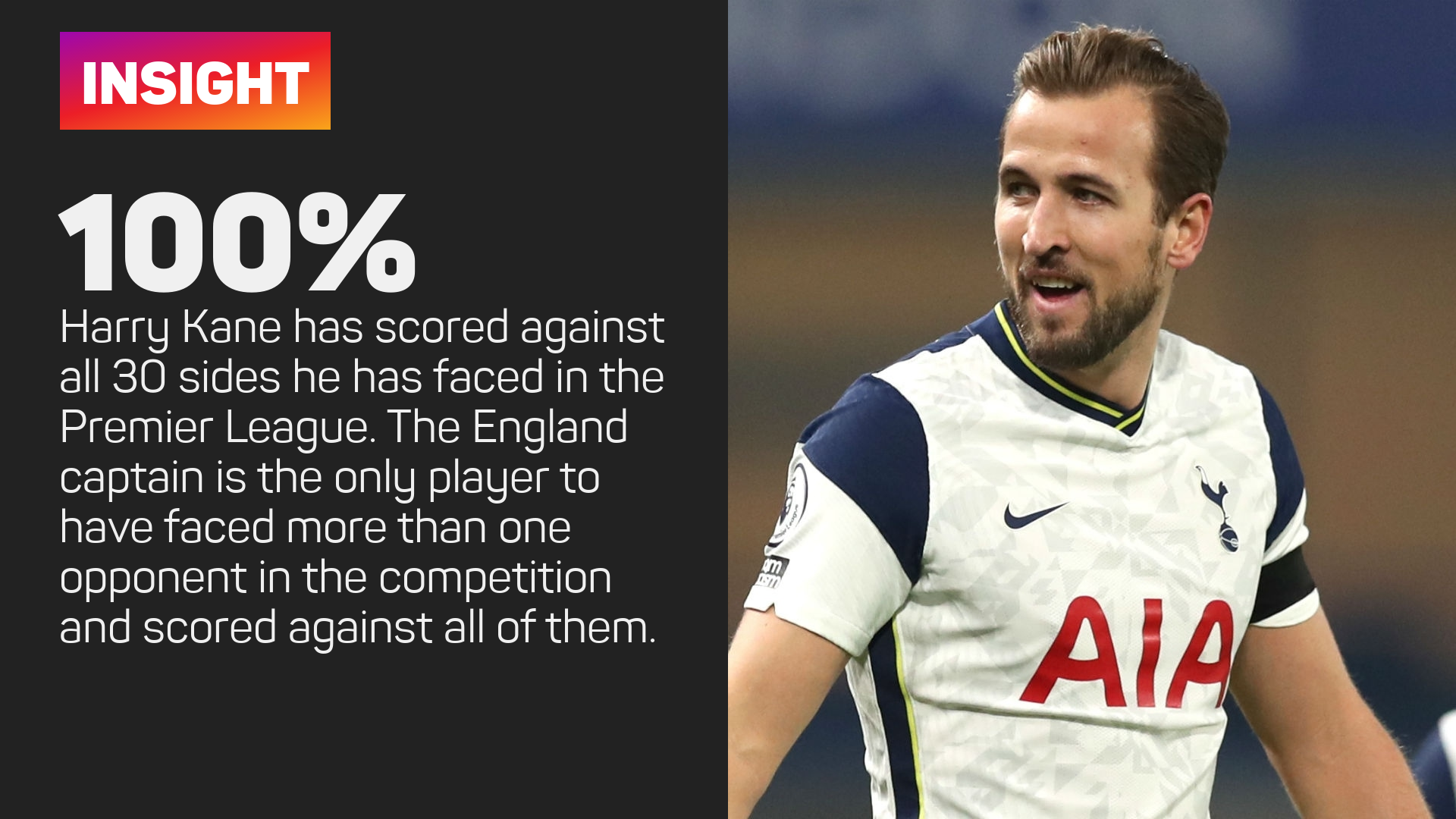 Nuno Espirito Santo oversaw three straight wins to start the league season, but Kane is not alone in suffering from the new coach's safety-first approach.

Tottenham also now have the sixth-lowest average possession in the division at 43.1 per cent.

Although this more conservative set-up has been in place for a little while now – Spurs last season started their sequences 39.7 metres from their own goal and have this term jumped slightly forward to 41.4m – it has only become more entrenched under Nuno.

A far cry from Mauricio Pochettino's pressing team, in which Kane thrived, Tottenham have had just 41 pressed sequences (fourth fewest) and 24 high turnovers (joint-fifth fewest) in 2021-22 so far and prefer instead to play on the counter, moving the ball 1.72 metres upfield per second (joint-third fastest).

This suits speedy fellow forwards Steven Bergwijn, Son Heung-min and Lucas Moura far better than it does Kane, who is neither notably quick nor regularly carrying the ball – 7.3 carries per 90 minutes this season rank him ninth among the 11 Spurs outfielders to feature in 100 or more minutes.

With Tottenham relying on these rapid attacks, rather than patiently playing through the thirds and allowing Kane to get into dangerous positions, the 28-year-old has made only eight touches in the opposition box. 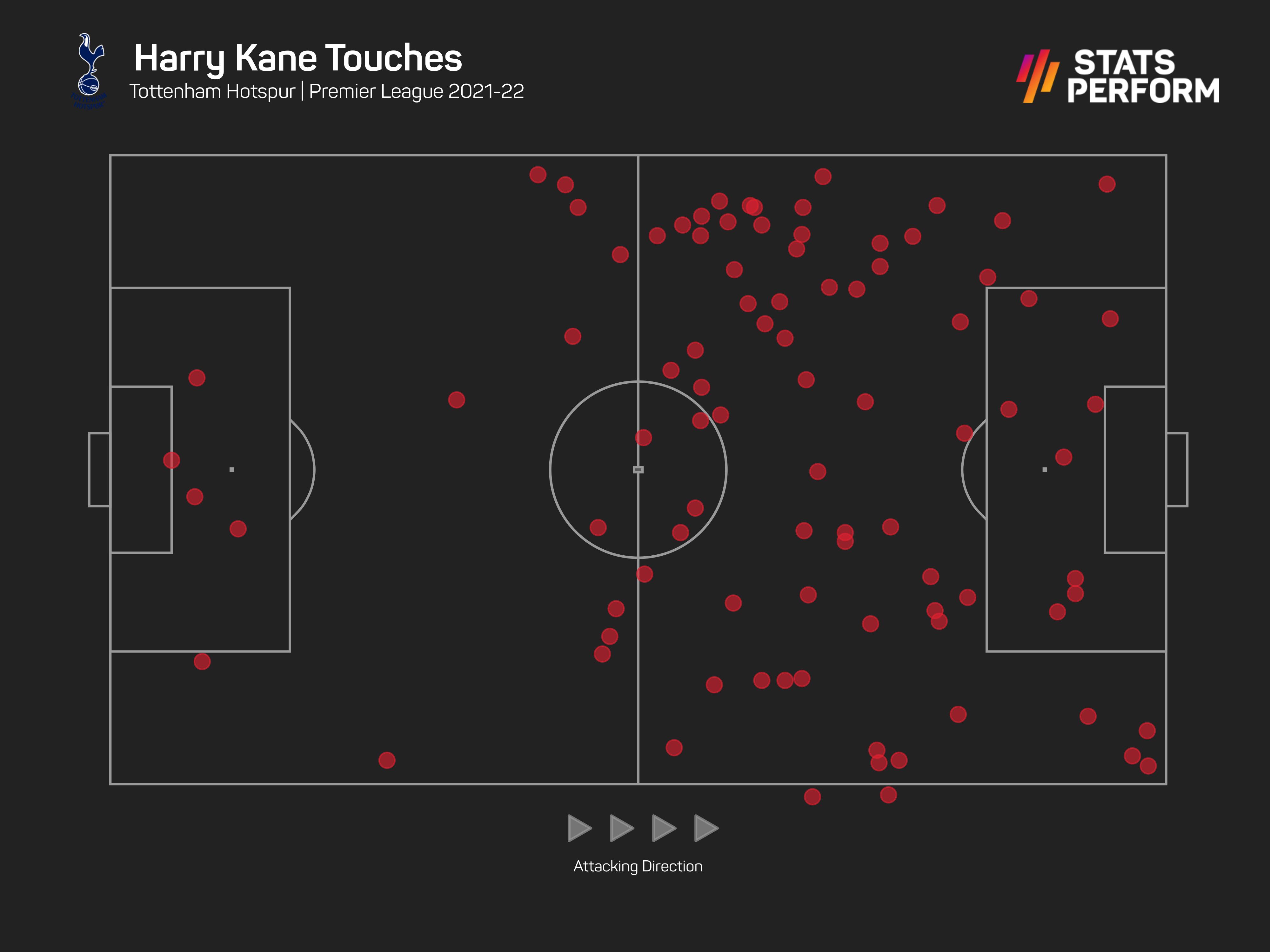 Of course, as shown previously for Spurs and England, Kane can be effective in dropping deeper and picking out the runs of those faster team-mates.

But just 3.2 of these sequences per 90 are ending in a shot, while Kane has not been involved in any open play sequences leading to a goal this term – a metric he unsurprisingly led (36) in 2020-21 when he topped the charts for Premier League goals and assists.

Kane is still creating chances – his four so far this season arriving every 49.5 minutes or every 22.8 touches – but Spurs would surely sooner have their main man on the end of such opportunities.

Given he attempted 61.3 per cent of his shots last season from inside the box, despite renowned ability from long range, this primitive decline should come as no surprise.

Just 8.8 per cent of Kane's touches have been taken in the opposition box. That career-low mark continues a downward trend into a fifth straight season, but it may now have reached a point where it is harmful to his chances of scoring.

Since Yaya Toure's sublime 2013-14 season from midfield, every Premier League player to notch 20 goals in a season has taken at least 10 per cent of their touches in the opposition box.

Few would write off Kane's chances of a sixth career 20-goal campaign at this stage, but he should expect competition for his Golden Boot from Sunday's opponent Romelu Lukaku. 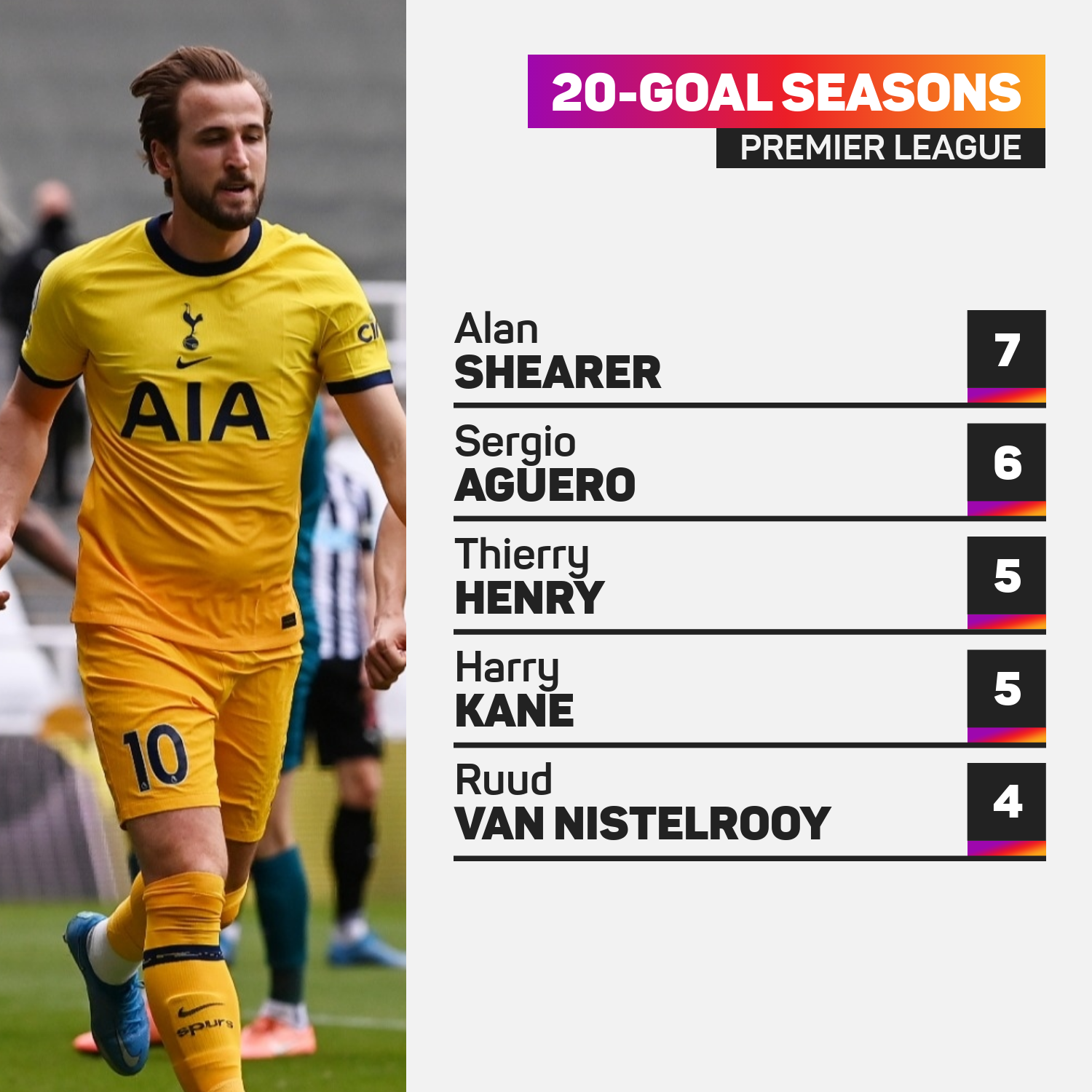 A picture of efficiency, Lukaku has scored three times from 12 shots for Chelsea this term, registering an attempt every 8.5 touches and a goal every 34 touches.

If Tottenham are to be successful this season, they need Kane to be hitting similar marks.

Whether that means a tweak to his role or a change in the entire system, something has to shift, for Lukaku could very easily show Nuno just what he is missing.

Atletico Madrid head coach Diego Simeone suspects it will be the money men who decide whether the World Cup takes place every two years.

Mauricio Pochettino has been boosted by the availability of Mauro Icardi ahead of PSG's 'special' clash against rivals Marseille.

Barcelona are seventh in LaLiga and trail Real Madrid by two points, but Ronald Koeman is buoyant on the back of successive wins.