After the draw for the 2022 World Cup took place on Friday, Stats Perform picks out some of the key facts and figures with help from Opta.

The dust is settling following the 2022 World Cup draw, which has provided a number of subplots and talking points aplenty to discuss between now and the opening set of games on November 21.

France, placed in a group that contains Denmark, Tunisia and one of Peru or Australia, will look to avoid becoming the fifth defending champions in the past six tournaments to exit at the first hurdle.

Spain and Germany, the winners of two of the past three World Cups, face off in arguably the pick of the group games in what will be their fifth meeting in the competition and the first since La Roja's 2010 semi-final triumph.

There are some good omens for England, who are in action on the opening day of the tournament – the last time that was the case they went on to lift the trophy on home soil in 1966.

As the debate rumbles on as to which is the most interesting group this time around, and supporters of participating nations plot out their route to the latter stages, Stats Perform picks out a key stat for each team.

The #FIFAWorldCup groups are set

Qatar are competing in their first World Cup and will aim to avoid becoming only the second host nation to be knocked out in the first round after South Africa in 2010.

They will begin their campaign against Ecuador, who have not faced a nation from outside of the UEFA or CONCACAF regions in their previous 10 World Cup matches.

Senegal are participating in the event for a third time and are the third African Cup of Nations title holders to qualify this century after Cameroon in 2002 and Nigeria in 2014.

However, the heavyweights of the group are the Netherlands, who have won 11 of their last 14 World Cup matches when not factoring in penalty shoot-outs. Three times Oranje have reached the final; three times they have been beaten. They failed to qualify for the 2018 World Cup, of course.

England have progressed past the quarter-finals just once since 1966, although the most recent occasion came four years ago when losing in the semi-finals.

First up for England are Iran, who have scored nine goals in 15 World Cup matches – that goals-per-game average of 0.6 the lowest of any side to have played at least 10 times.

Back involved after missing Russia 2018, the United States will be looking to reach the knockout stages for a fourth time in their past five participations in a World Cup.

Should Wales reach the finals, the gap of 64 years between their only two finals appearances will set a record.

Scotland, who meet Ukraine in a play-off for the right to face Wales, have made more World Cup appearances (eight) without making it past the first round than any other nation. 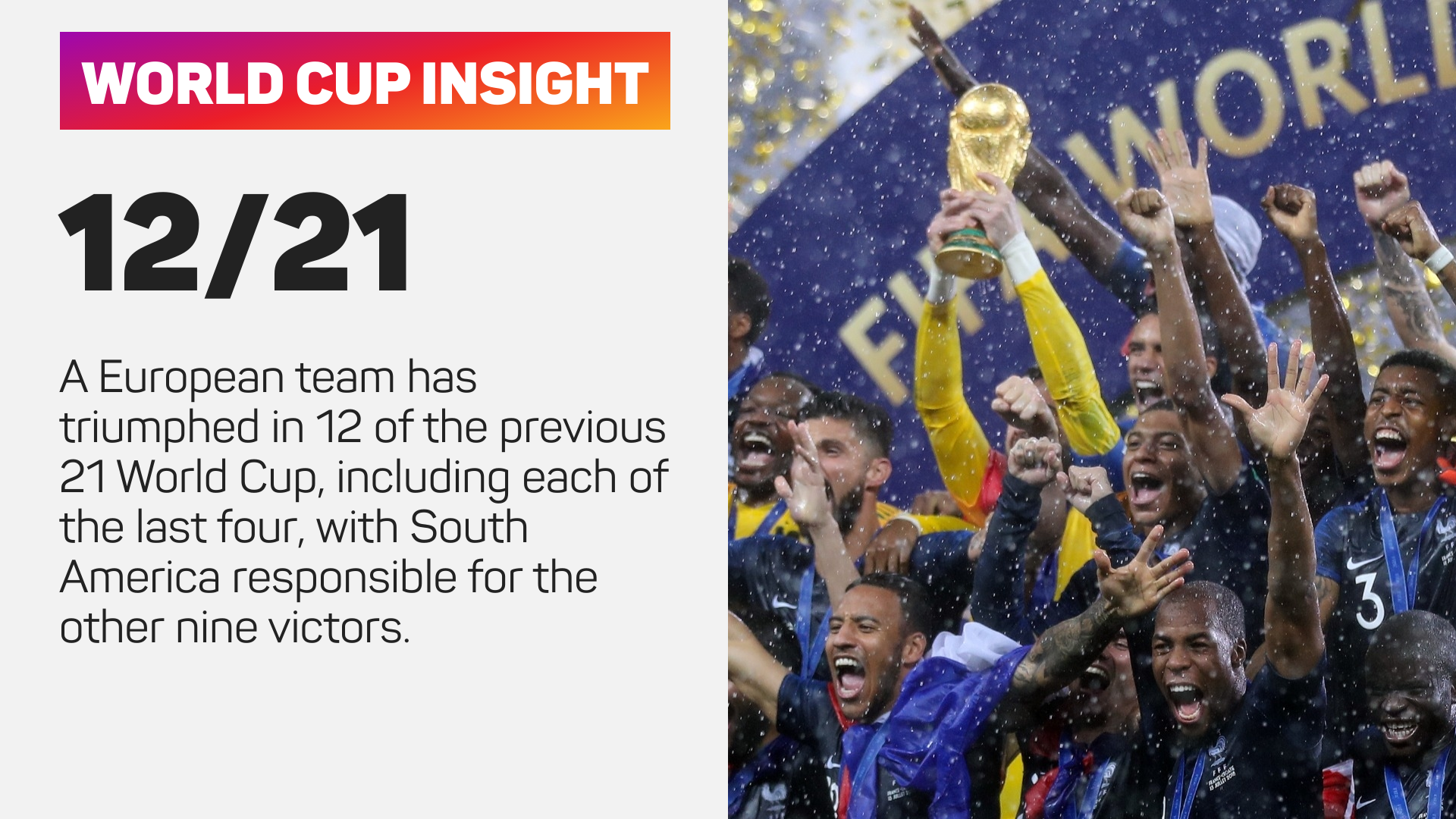 One of three South American teams to have lifted the trophy, Argentina have made it past the first round in 12 of their past 13 appearances, the only exception being in 2002.

It would be an understatement to say that Saudi Arabia have had less success in the finals, having won only three of their previous 16 World Cup matches – albeit one of those coming against Egypt in the 2018 edition.

Mexico have reached every World Cup since missing out in 1990 and tend to do well in the group stage, having advanced to the last 16 in each of their last eight appearances.

Whereas Mexico have won five of their past six opening games, first opponents Poland have won just one of their previous eight curtain-raising fixtures and have lost the last three.

France are out to become the third team, after Italy (in 1938) and Brazil (in 1962) to retain the trophy. However, the last three defending champions have fallen in the group stage.

Denmark boasted the best defensive record of any side in European qualifying and have made it out of the group stage in four of their five World Cup appearances.

That is in contrast to Tunisia, who have not made the knockout rounds in six previous attempts. The Eagles of Carthage have also not beaten a European side in 10 World Cup games (D3 L7).

Tunisia have lost 60 per cent of their World Cup games, the third-highest by a team to have played 15+ games behind Saudi Arabia (69 per cent) and possible Group D opponents Australia (63 per cent). 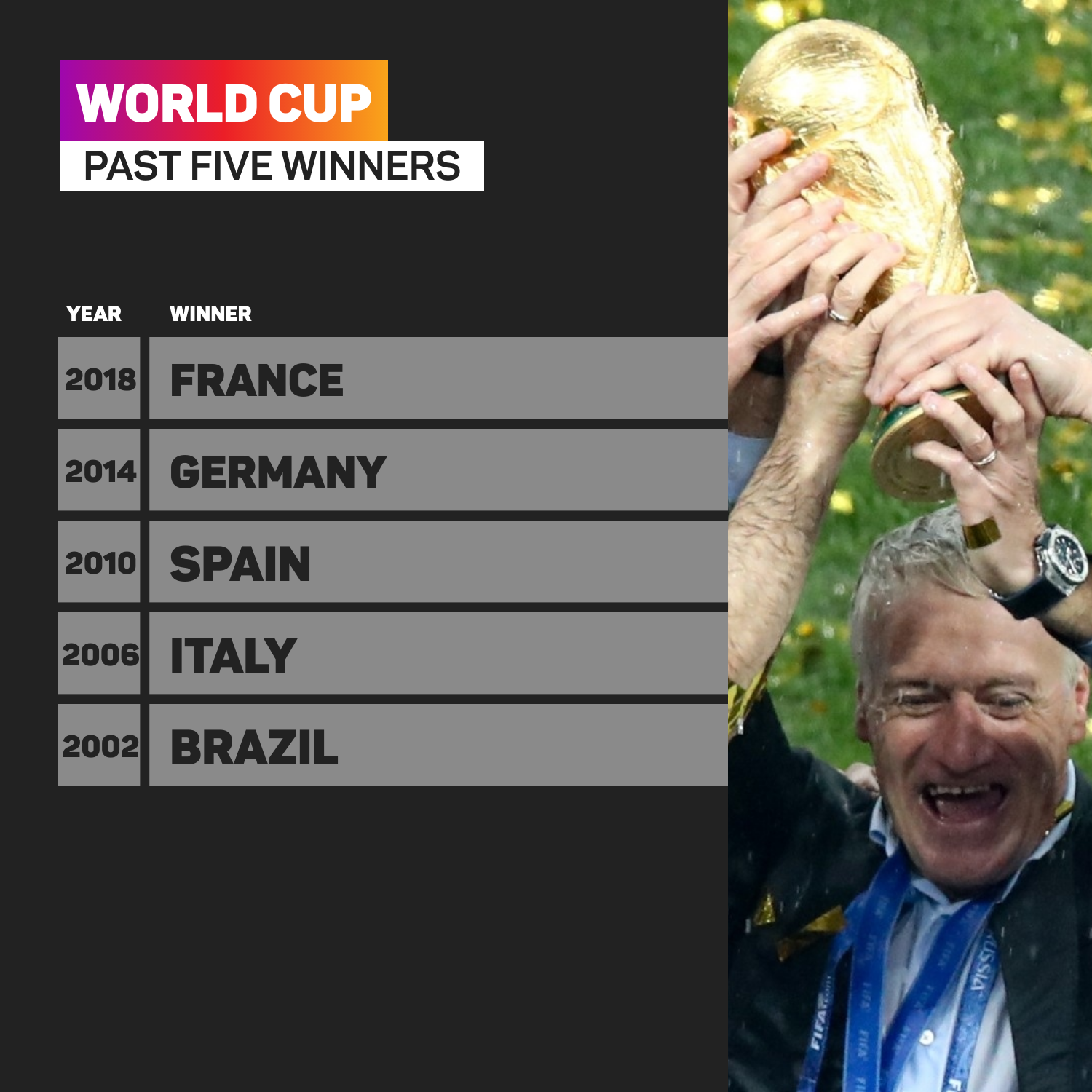 Spain won the World Cup in 2010, but that is the only occasion they have reached the semi-finals in their last 13 participations. However, they have won the group in four of their last five appearances.

Germany, champions in 2014, were the first side to reach Qatar 2022 aside from the hosts, and have made it to the semi-finals in four of the five World Cups this century – the best record of any side.

After reaching the last 16 in 2018, competition regulars Japan will aim to book a place in the knockouts in back-to-back editions for the first time.

Completing arguably the toughest group is either Costa Rica or New Zealand, who meet in a play-off in June. Costa Rica have appeared at five previous World Cups, while the All Whites have made it to the finals twice before.

4 - Germany will face Spain in the World Cup group stage for the fourth time, more often than against any other opponent. The Germans are unbeaten in each of those previous three games. Vamos. #WorldCupDraw #WorldCup2022 pic.twitter.com/CZQYFIpOgY

Belgium have qualified for more World Cups without winning it than any other European team, with this their 14th appearance. With much of their 'golden generation' either 30 or close to it, however, this is realistically the final chance for that batch of players to cement their names in the history books, after a third-place finish in 2018.

Roberto Martinez's team might meet Spain or Germany in the last 16 but should have little trouble in getting out of their group.

Canada are competing in the global showpiece for the first time since 1986, when they lost all three matches and failed to score.

Morocco have won just one of their last 10 World Cup games, with that coming against Scotland in 1998, while their last knockout-round appearance was in 1986.

Beaten finalists in 2018, Croatia have had a mixed time of things in the finals, having been eliminated in the group stage (three times) or reached the semis (twice) in their past five appearances. 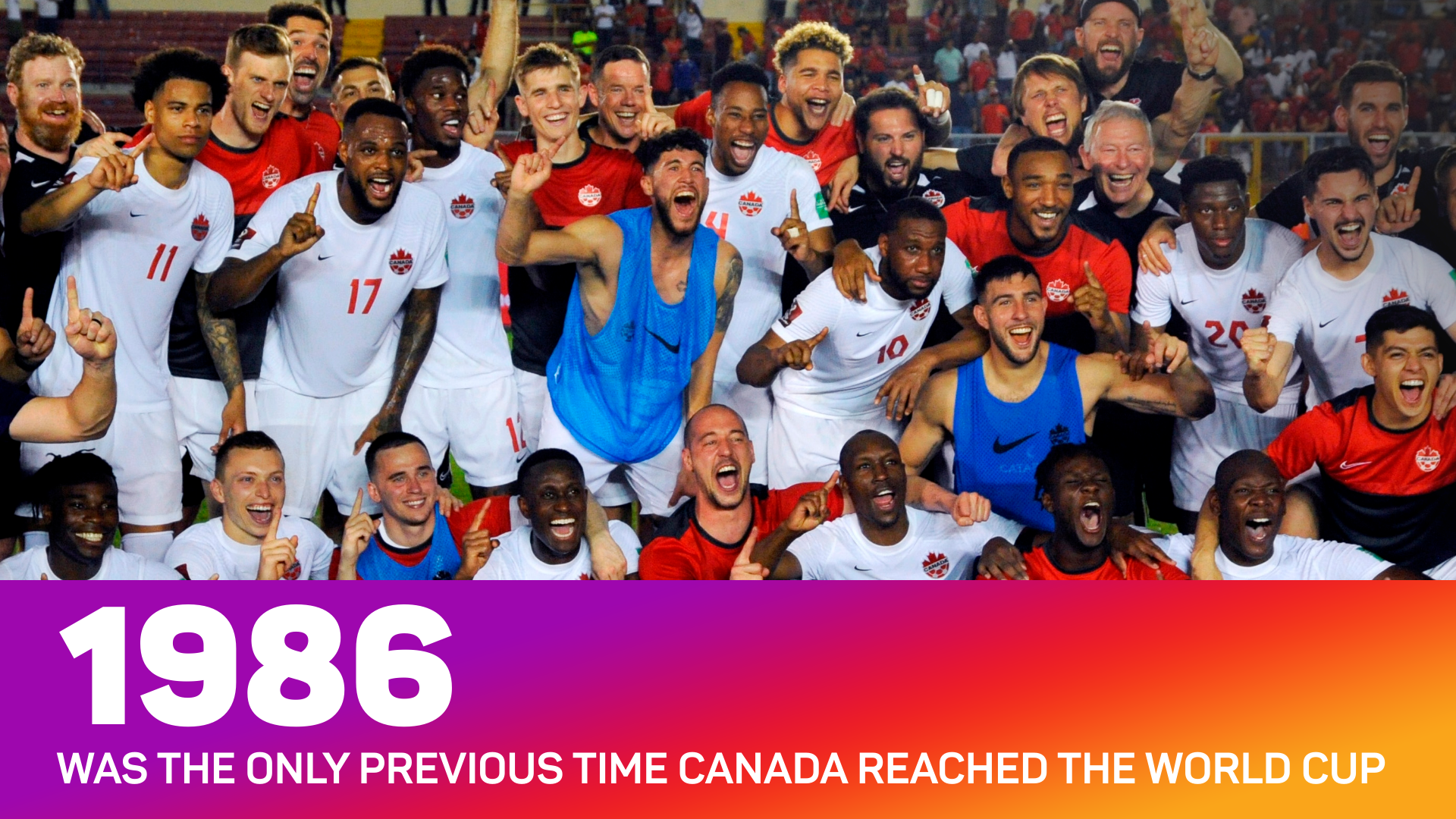 Brazil are the competition's most successful side with five trophies and are unbeaten in their last 15 World Cup group games, winning 12 of those. Their last such defeat was against Norway in 1998.

The next side with a chance to end that long run are Serbia, who have lost seven of their last nine World Cup matches, which is the most of any European nation since 2006. They also met Brazil in the 2018 group stage.

Another team to have been drawn with Brazil and, indeed, Serbia in Russia was Switzerland. History has repeated itself this time around. The Swiss finished above Italy in qualifying to make it to their fifth successive finals. Including the European Championships, they have reached the knockout stages in their last four major tournaments, a record only Belgium and France can match.

Cameroon make up Group G. They have played more matches at the World Cup than any other African nation (23), but they have lost the last seven of those – only Mexico (nine) have ever lost more in a row.

Heavyweights they may be, but Portugal have won only three of their last 14 World Cup matches, each of those in the group stage. Their last knockout-round win was in the last 16 against the Netherlands in 2006.

All being well, Cristiano Ronaldo will be featuring in a record-equalling fifth World Cup. It will almost certainly be his last, though.

Ghana's quarter-final appearance in 2010 remains the joint-best finish for an African side, alongside Senegal in 2002 and Cameroon in 1990, and they have scored in their last five World Cup games.

Uruguay controversially eliminated Ghana in the quarter-finals 12 years ago but the Black Stars have a chance for revenge here in the final round of fixtures.

First up for Uruguay, meanwhile, are South Korea, but the South American side have won their opening match at just one of their last seven World Cups.

That is good news for Son Heung-min and Co. as South Korea look to win successive finals matches for just the second time ever, having knocked out Germany four years ago.

Jordan Pickford has been in excellent form as Everton have steered away from relegation, while Aaron Ramsdale and Arsenal have wobbled.

Cafu: If Brazil don't win the World Cup it will be a failure

Five-time World Cup winners Brazil are tipped by many as favourites in Qatar, and Cafu has called on his country to deliver success.

Liverpool star Trent Alexander-Arnold has come in for significant praise from one of the world's most revered right-backs: Cafu.

Guardiola suits Brazil and would get the best out of Neymar, says Julio Cesar

Brazil reportedly want Pep Guardiola as their next head coach and Julio Cesar thinks his style of play would suit the Selecao squad.

Malik Tillman has represented Germany at various age levels but has now switched allegiance to the United States ahead of the World Cup.

Marseille midfielder Boubacar Kamara is set for a big move this close-season and has received his first senior France call-up.