Germany are into the Women's Euro 2022 quarter-finals with a game to spare, while Spain need to avoid defeat against Denmark next time out.

Germany are through to the knockout phases of the Women's Euro 2022 after beating Spain 2-0 in Group B, a result which also confirmed Finland's elimination following their 1-0 loss to Denmark.

Tuesday's second match was seen as the game that would decide Group B's winners, and that looks set to be Germany.

Spain were not exactly outclassed at the Brentford Community Stadium, as their chances amounted to 1.4 expected goals (xG) compared to Germany's 0.8.

But they shot themselves in the foot by gifting the eight-time European champions a third-minute lead, as Sandra Panos hit her clearance right at Klara Buhl, who cleverly evaded Irene Paredes before applying a clinical finish.

Spain kept the German defence busy and dominated proceedings for significant periods, but life got even tougher for Jorge Vilda's team in the 36th minute when Alexandra Popp beat Patri Guijarro in the air to head Felicitas Rauch's corner home.

Chances were more of a rarity in the second half, and when Merle Frohms pulled off arguably the save of the tournament so far to tip a Mariona Caldentey volley over 19 minutes from time, you got the sense this was not going to be Spain's day.

Germany ultimately cruised to victory and know a point against Finland on Saturday will secure top spot in the group. 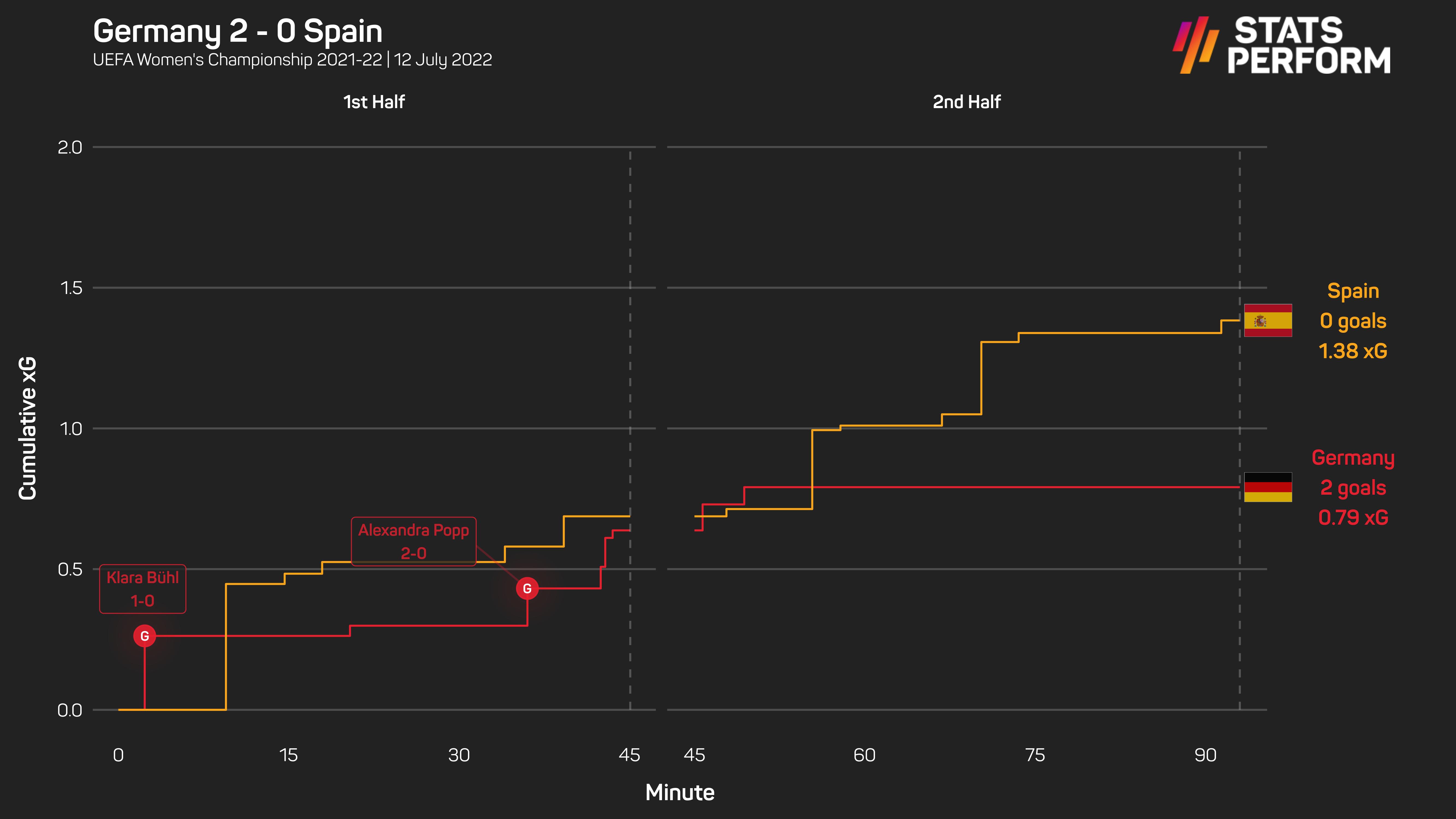 Earlier in Milton Keynes, Denmark and Finland faced off knowing there was a distinct possibility one of them could be out of the tournament by the end of the day.

Both suffered comprehensive defeats on matchday one, meaning another loss on Tuesday would likely be a knockout blow.

It was evident almost right from the start that Finland were going to struggle, with the Danes dominating the ball and looking more cohesive going forward.

But Denmark were frustrated in the first half, with Tinja Riikka Korpela proving a reliable last line of defence in the Finland goal.

Finland did not record a shot on target until the 60th minute, though Ria Oling's long-range effort was comfortably held by Lene Christensen.

Denmark's persistence paid off 18 minutes from time, however, as Pernille Harder nodded over the line from close range after the ball came back off the bar.

Although that proved decisive, Denmark will still need to beat Spain to pip them to the runners-up spot in the group, due to La Roja's significantly better goal difference. 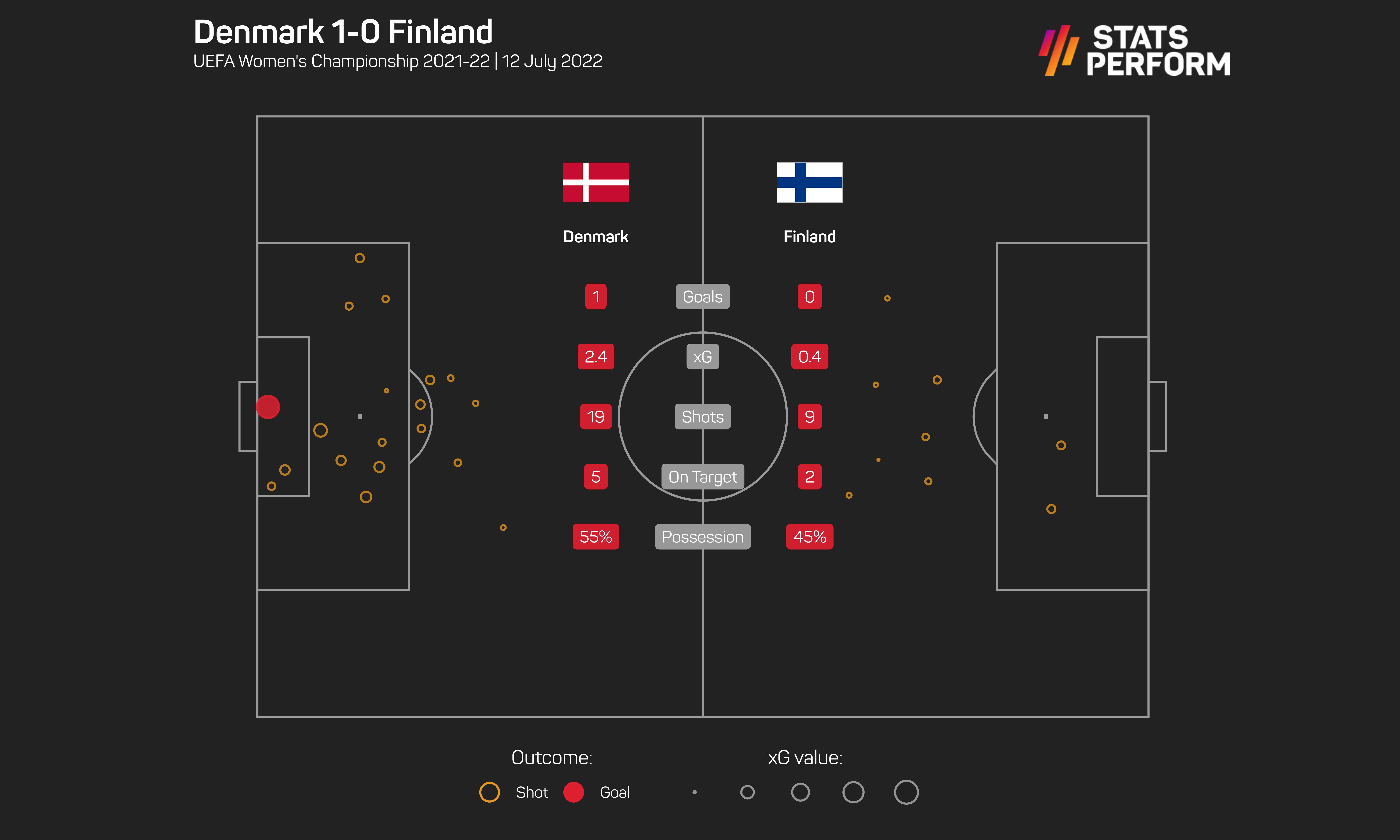 Harry Kane scored a dramatic late equaliser to secure a point at Chelsea, but what happened in the build-up has proved highly controversial.

Rodgers: Fofana not for sale

Chelsea are reportedly keen on bringing Wesley Fofana to Stamford Bridge, but Leicester City have no intention of letting him go.

Mexican winger Jesus Manuel Corona was taken away by ambulance after suffering devastating leg and ankle injuries in training with Sevilla.

Antonio Conte and Thomas Tuchel were both sent off after an altercation following full time in Sunday's draw between Chelsea and Tottenham.

Manchester City's title celebrations were somewhat marred by the actions of some supporters in May and the FA has now charged the club.