Where did it all go wrong for Philippe Coutinho?

Barcelona tackle Bayern Munich on Wednesday in a crucial Champions League game, knowing they probably have to win in the Allianz Arena to qualify for the knockout stages.

The Germans are already safely through as winners of Group E, but Barca will crash out at the group stage if they fail to win and Benfica beat Dynamo Kiev in Portugal.

One player who made a notable cameo when Barca and Bayern played one another in the quarter-finals of the Champions League two seasons ago was Philippe Coutinho, whose star has fallen so far since a record move to the Camp Nou in 2018 that he may not even feature in the vital clash.

Stats Perform has taken a look at what happened to the £142million man.

It was the day before the start of the 2017-18 season, and Liverpool's campaign already felt like it had been thrown into chaos.

Jurgen Klopp was getting ready for a trip to Watford when news broke that his star man Philippe Coutinho had handed in a transfer request, supposedly after the Reds had rejected a £90million bid from Barcelona.

Liverpool ended up drawing 3-3 at Vicarage Road with new man Mohamed Salah scoring his first goal for the club in a game in which Coutinho did not feature, insisting that he had a sore back.

The Brazilian was ultimately forced to stay until the January transfer window when he eventually sealed his dream move to the Camp Nou for a deal that, with add-ons, would amount to around £142million, a record for the Catalan club.

To his credit, Coutinho got his head down after the disappointment of being denied a move in the summer of 2017, playing 20 more games for Liverpool in the first half of the campaign, scoring 12 goals and registering eight assists.

His numbers were up there with the rest of what remains to this day Liverpool's main front three of Salah, Roberto Firmino and Sadio Mane, but back then he was part of what was briefly known as 'The Fab Four'. His minutes-per-goal record (one every 125.67 minutes) was second only to Salah (94.68) among those with one than one appearance, while he created more chances than anyone else (56).

He did miss a few more games closer to the January transfer window through more apparent back issues, but scored one final screamer at Anfield against Swansea City in his last game for the club, coincidentally the same team he had scored his first Reds goal against in February 2013 after arriving from Inter Milan for just £8.5million.

In his five years on Merseyside, Coutinho won the hearts of the Kop with his skill, his effort and increasingly, his end product, bagging 54 goals and 43 assists in 201 games for the club.

However, it seemed his heart lay elsewhere, finally securing a move to Barcelona in January 2018. 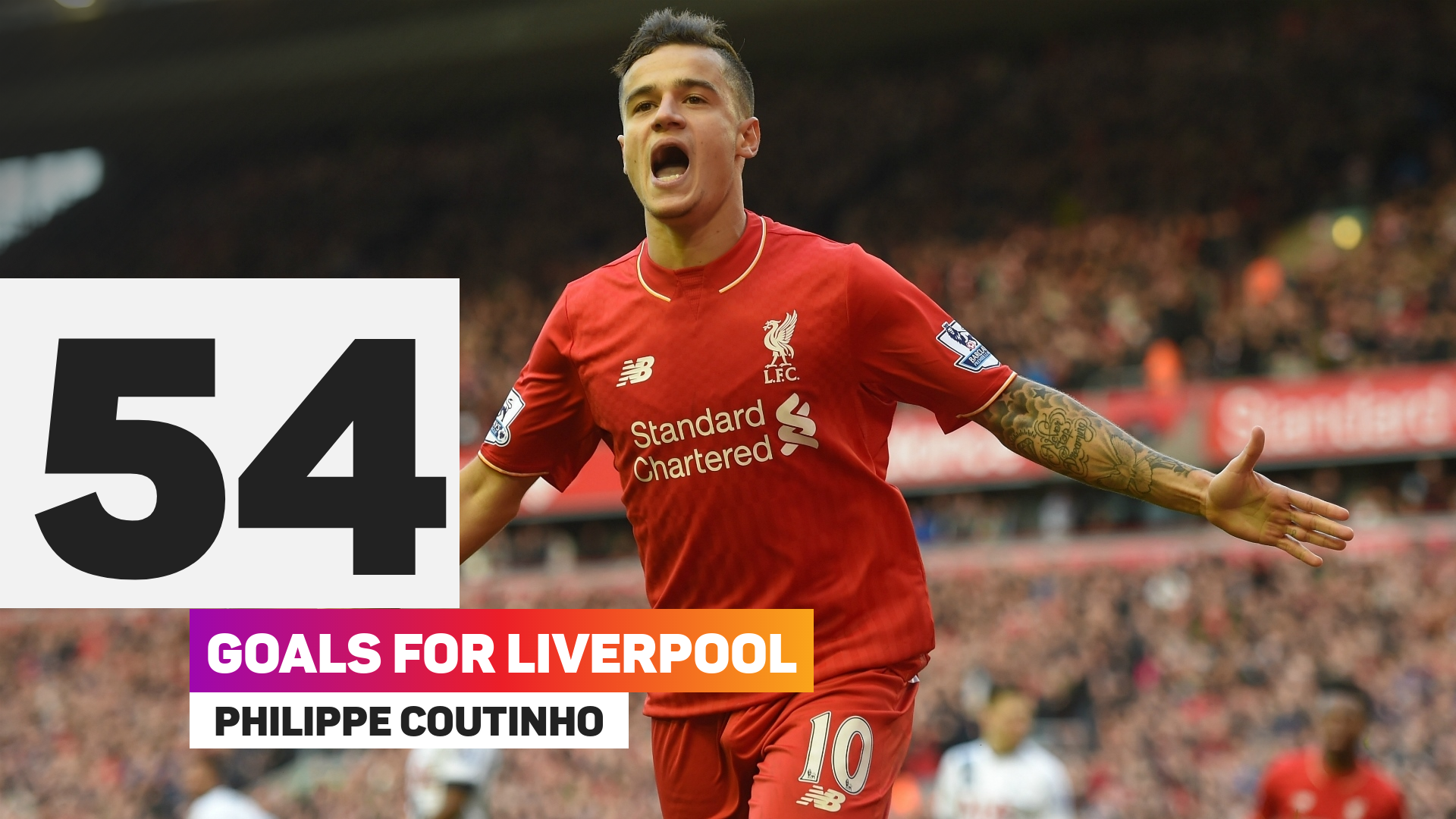 There was pressure on his shoulders immediately, arriving just a few months after the departure of Neymar to Paris Saint-Germain, with much of the money Barca received being spent on prising Coutinho from Anfield.

There was also talk that he was ultimately being tasked with replacing Andres Iniesta, who was to leave Barca at the end of the 2017-18 season, with taking over from such a club legend a formidable task for anyone.

Coutinho did not start too badly in his first five months, scoring 10, assisting six and creating 33 chances in 22 appearances as Barca lifted the Spanish title and Copa del Rey.

However, his first full season did not quite go according to plan, with Coutinho managing 11 goals and five assists in 54 appearances, actually scoring fewer than he had done in his final half-season at Liverpool. He created 59 chances, compared (admittedly cruelly) to the great Lionel Messi's 141 in fewer games across that 2018-19 campaign.

Barca boss Ernesto Valverde did not seem to know what he wanted from Coutinho, sometimes playing him in Iniesta's old position in midfield, sometimes playing him in Neymar's old position out wide on the left. Coutinho was criticised by some for appearing to not be suited to either, despite the fact he fulfilled both well enough in the Premier League.

To rub salt in the wounds, Coutinho would return to Anfield that season as part of a Barca side that capitulated in the Champions League semi-final, throwing away their 3-0 advantage from the first leg to crash out of the competition, with the Brazilian's old Liverpool team-mates going on to lift the trophy in Madrid a few weeks later. 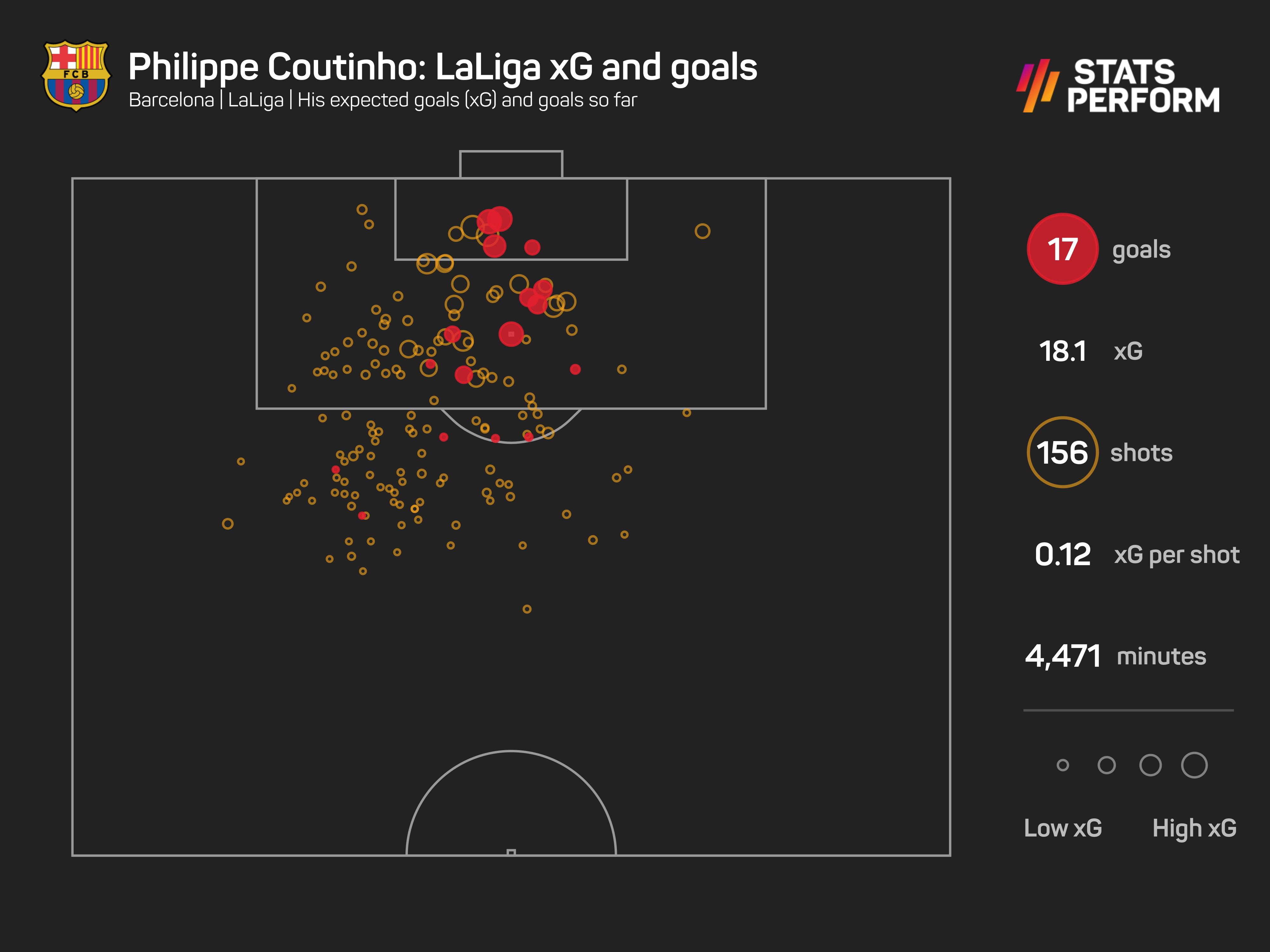 Despite progress not running smoothly for Coutinho, it was still a surprise for many to see Barca agree to loan him to Bayern Munich the following season. Antoine Griezmann had been signed from Atletico Madrid, which would have limited Coutinho's Camp Nou game time, so the hope was either that he would rediscover peak form in Germany, or at least do well enough that Barca could make some of their money back with a future transfer.

He showed marginally more of his former self, scoring 11 and assisting nine in 38 appearances, albeit only 22 games from the start, while creating 50 chances, and 11 big chances. But it was difficult to stand out much in a team that included Thomas Muller and Robert Lewandowski.

Never one to miss out on ironic Champions League moments, Coutinho came off the bench to score the final two goals of an 8-2 thrashing of his parent club in the quarter-finals.

He ended that season with a Champions League winner's medal, as well as winning the Bundesliga title and DFB-Pokal in an impressive treble, but Bayern decided against signing Coutinho permanently.

Under Ronald Koeman, Coutinho was determined to finally make a success of his career back at Barcelona, and showed glimpses in the 14 games he managed in the 2020-21 season before injury struck as he suffered a torn meniscus, ending his campaign before the new year.

It seemed one of the transfer market's worst kept secrets that Barca were open to selling Coutinho at the end of that season, among several other players, as financial woes mounted at the club, but there were understandably no takers given his form and injury issues.

Both parties were left with no choice but to try again this season, and while he has been given chances, they have been sporadic, with just five starts and nine substitute appearances so far, registering two goals. Coutinho has yet to provide an assist, and he has only created two chances.

Xavi is now in the hot seat at the Camp Nou, pledging to return a struggling team to the "Barca way", and he opened the door for Coutinho to perhaps have one last shot of establishing himself.

"Coutinho is someone who can play in various positions, and he can be important for the team," Xavi told reporters ahead of his first match in charge against Espanyol.

"He needs to re-find himself and recover his confidence. If he does, he will help us a lot. He has an innate talent. It depends on him. He will get chances because he's a player I like personally. It's more psychological than anything because he has talent."

Anyone who watched Coutinho regularly at Liverpool will know there is a world-class player in there somewhere. Klopp was able to get a tremendous tune out of him despite not necessarily playing in a style that suits him, and with the player not even wanting to be there in the last few months.

Xavi is right, though. When Coutinho is given opportunities, it will depend on him.

He will just be hoping those opportunities don't come in the Europa League.

Jadon Sancho came off the bench against Nottingham Forest on Wednesday to make his first Manchester United appearance since October.

A new-look Chelsea side were frustrated by Fulham as their hopes off finishing in the Premier League's top four took another blow.

Andreescu backing herself to return to title-winning ways in Thailand

Bianca Andreescu was belatedly tested in her Thailand Open quarter-final, but the Canadian came through and is chasing overdue silverware.

Brighton and Hove Albion refused to accede to Moises Caicedo's demands when he sought a move to Arsenal. Now, relationships need rebuilding.