Adam Peaty is convinced the morning starts for swimming finals are contributing to uncertainty in the pool at Tokyo 2020 and hopes defending his Olympic title sparks a gold rush for TeamGB.

Organisers have scheduled swimming finals to take place earlier in the day in the Japanese capital, with the heats being held in the evening.

There have been some notable shocks already, with home favourite Daiya Seto failing to make it out of the heats in the men's 400 metres individual medley, while Tunisian teenager Ahmed Hafnaoui earned an upset win from lane eight in the final of the 400m freestyle.

Coming into the Games, there was talk of whether Peaty could beat his own astonishing world record of 56.88 seconds in the 100m breaststroke.

While unable to do so, Peaty still dominated the competition, winning Monday's final in a time of 57.13, the fifth fastest of all time.

For 26-year-old Peaty, ensuring he got the job done was the all-encompassing motivator given the way others have struggled.

"To be honest, I've never known swimming like this before," Peaty told a roundtable of journalists after winning gold in Tokyo.

"Normally you've got a solid one-two or maybe three if you can call it. You can't really predict it, in the 400 free there was a Tunisian guy [Hafnaoui] who won it in lane eight.

"You can't predict that, so I think it is something to do with the morning finals and it's how the athletes adapt to that. I think it was the same in Beijing.

"Sport is changing and the way we adapt, we train, and focus on mind and body and how we have to balance those.

"I mean I'm fed up of talking about COVID but it's given us a chance to sort of really think differently about that and there's been a few breakout performances from COVID.

Peaty, who became a father within the last year, was very open about the pressures he has been through in recent times.

Asked about the contributing factors to that pressure, Peaty said: "I mean put it simply we've seen over these two days, maybe three days, which is a lot of unexpected performances.

"A lot of people who should be going in here defending and winning medals are kicked out, especially in swimming we had Daiya Seto who is Japanese in the 400IM, he didn't make the final.

"These Games are very, very different, and that's how we talk about pressure now. Mel [Marshall – Peaty's coach] said last night and a few of the other coaches have too, it's not about the times here, no one cares about the times, it's about the race, who wants it more in that last 20 metres.

"It made me think completely differently, that every single championships I chase times because that's kind of validation for my training, I've trained really well this season.

"But it doesn't matter here, it's about the race, getting on that wall first, but also taking in every single trip and every single moment I can for these Olympics and hopefully inspiring as many people as I can while doing it." 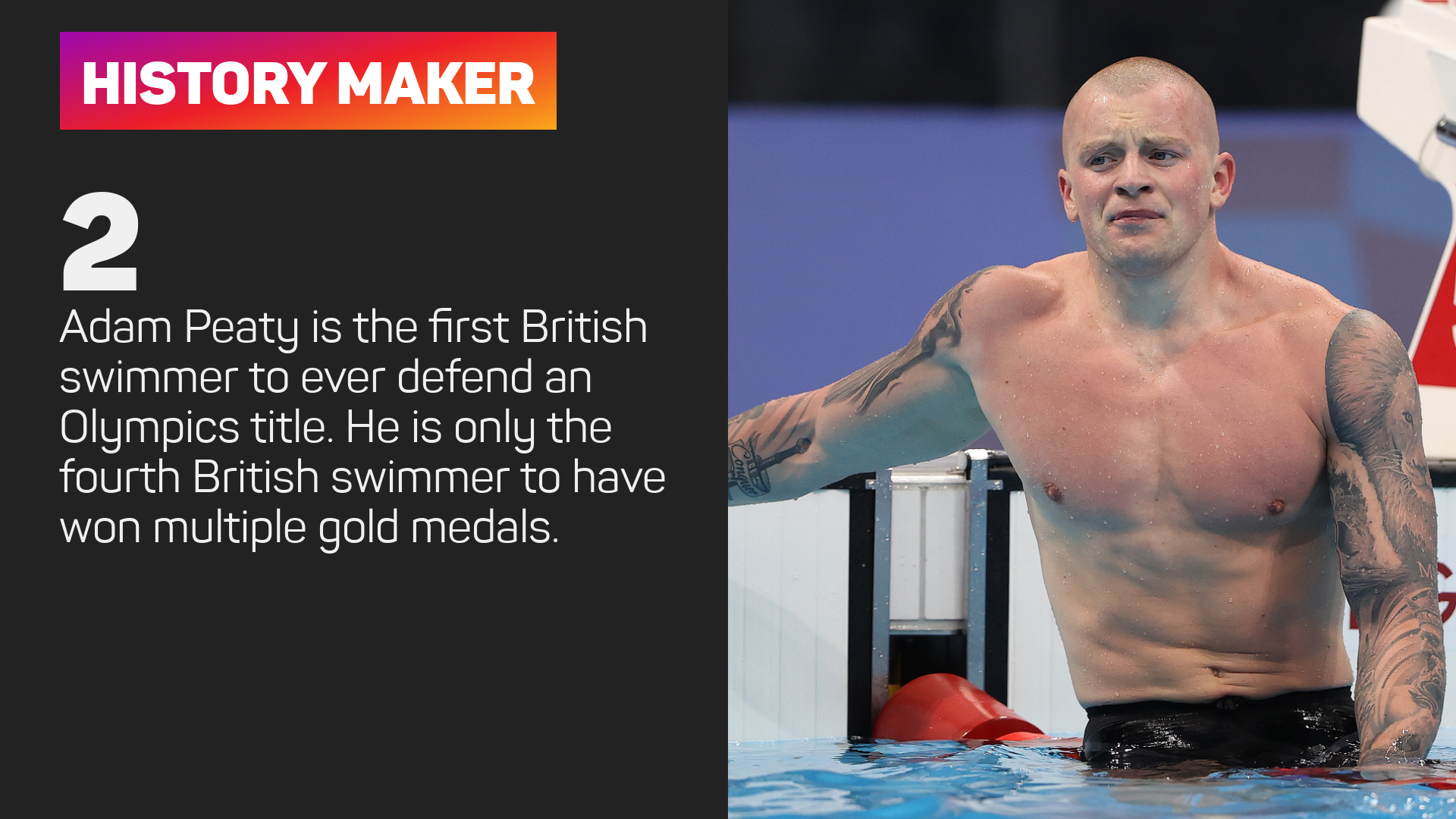 It was five years ago in Rio where Peaty won TeamGB's first gold of the Games, acting as the springboard for a hugely successful Olympics whereby Great Britain won 27 golds and finished second in the medal table.

His success in Tokyo was also TeamGB's first and was quickly followed by triumphs for Tom Daley and Matty Lee in the men's 10m synchronised diving, while Tom Pidcock won the men's cross-country in mountain biking.

"I literally caught it, I caught Tom and Matt on the last dive and it was anti-climactic for me because I don't know how many rounds there are in diving – and I saw them dive, and I saw the Chinese dive because I think they were the last to go and I saw Tom celebrating and I thought 'oh my God they must have won' and yeah that's the beauty," added Peaty, who became the first British swimmer to defend an Olympic title.

"I said that it could be a catalyst, not that it's down to me, those athletes are amazing. But it shows you when we come together as a team and show that kind of community spirit anything is possible.

"I know Duncan Scott is up in the morning on the 200 free and he's a very strong candidate for gold there. Hopefully we've got it rolling now and we'll see the gold rush, eh?"