Hideki Matsuyama and Xander Schauffele battled it out for Masters glory and now they will go head to head in a scramble for Olympic gold on Sunday.

Japanese superstar Matsuyama trails American Schauffele by one shot going into the final round at Kasumigaseki Country Club, and they will join Paul Casey in the final group out.

A home triumph for Matsuyama at the Tokyo Games would be an extremely popular result in Japan, but the top 10 are separated by only four strokes, so medals remain firmly in the sights of a host of players.

AS AUGUST ARRIVES, AN AUGUSTA REPEAT

Almost four months have gone by since Matsuyama became the first Japanese man to win a major, when he edged home at Augusta National on a tense final day.

He partnered Schauffele for the final two rounds at the Georgia course, and the same thing has played out this week, with the August 1 finale to the golf event sure to make for absorbing sporting theatre.

The big-name front-runners also had Mexican Carlos Ortiz for company on Saturday, but it was Schauffele who stayed at the head of the pack after following Friday's 63 with a hard-fought 68 to reach 14 under, with Matsuyama on 13 under after a 67, having completed a second-round of 64 earlier in the day.

Schauffele "hung tough", the American said, relying on solid putting to dig him out of trouble as he struggled with his long game.

It was Matsuyama who led going into the final round at The Masters in April, when he held a four-shot cushion but ended up winning by only one after a 73. Schauffele's hopes disappeared when he found water and made six at the par-three 16th that day.

All eyes on Hideki Matsuyama

1 shot back
Teeing it up in the final group
Playing in his home country
In search of Olympic gold pic.twitter.com/jASOueH3Jo

Despite the gold medal being a tantalising target, Schauffele said Saturday had been a routine day on the course.

"Tomorrow may feel a little different," he said. "There's a little bit more on the line than what we normally play for and you're trying to represent your country to the best of your ability."

He was impressed by Matsuyama, who is playing his first event since testing positive for COVID-19, which forced him to miss the Open Championship.

"He seems to be fine," Schauffele said. "Teeing up, he seems strong, he seems normal and he seems himself. Luckily he wasn't hit too hard by it.

"He was firing on a lot of cylinders when he won the Masters. He's maybe not in his realm of perfection, hitting it as well as he'd want to, but he's one back.

"Hideki's a great player, our current Masters champion. I plan on wearing that [green] jacket some day as well. I assume we'll be playing in more final groups for years to come." 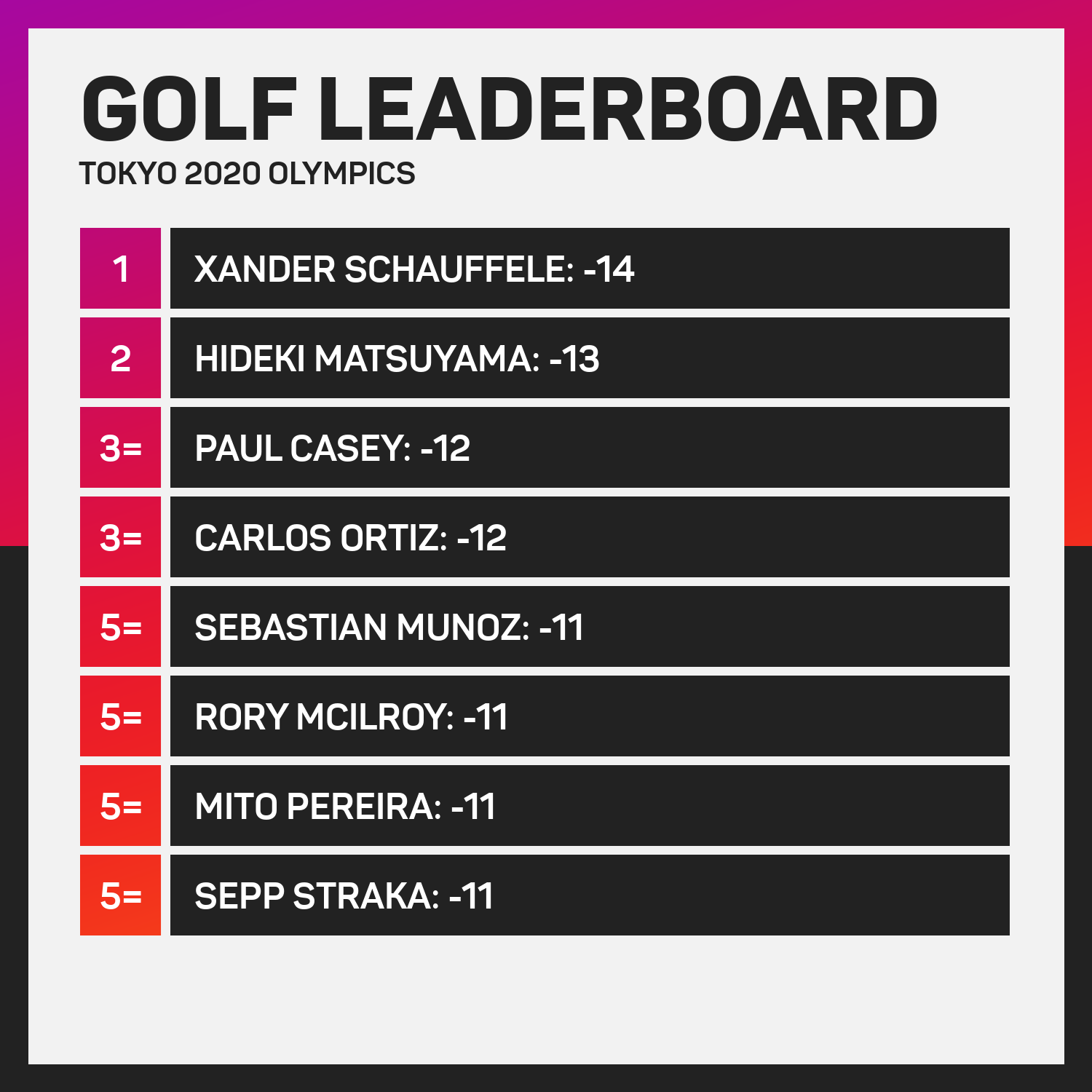 After the blow of Naomi Osaka losing early in the women's tennis, her fellow global superstar is coming good on the golf course.

Matsuyama has been surprised by his recovery from COVID and would love a medal from Tokyo's Games, expressing obvious pleasure at being in the mix so soon after being ill.

"I definitely could not have believed that," he said. "The endurance part of my game has been struggling a little bit, but thankfully it's held up in the last few days. Hopefully it will hold up tomorrow as well."

The host nation awaits a home golfing champion, and Matsuyama is up for the challenge of taking on Schauffele and the chasing pack.

He was asked how the Olympic experience compares to the pursuit of a major.

"There's not much difference to it, but in the Olympics the fact is that third place is still celebrated, as well as second, so there's a nice thing waiting for you even if you get third place," Matsuyama said.

"At a major championship, only the winner will be celebrated. I'm not sure tomorrow what my motivation will be, but I'm going to focus on playing good golf.

"I played with Xander in the third and fourth day together at The Masters. I'm sure Xander will come out determined to win the gold medal, so hopefully on my end too I'm going to come out strong on the mental side."

HOW LOW CAN THEY GO?

If Schauffele and Matsuyama are both to be overtaken on Sunday, it may take a score in the low 60s to snatch away gold.

Tommy Fleetwood showed that is possible with a 64 in the third round, as the Great Britain player climbed to a share of ninth on 10 under, alongside Ireland's Shane Lowry.

McIlroy said:"I've got a great chance going into tomorrow. It's a bit of a packed leaderboard so all to play for.

"It's going to be brilliant. A lot of us are trying to do something that none of us have ever done before.

"There's a lot of us that are going to be going through experiences that we've not experienced."

Padraig Harrington reacted to Europe's start to their Ryder Cup defence at Whistling Straits on Friday.

Europe face a stiff test of their Ryder Cup resolve after a desperate opening day against the United States.