The United States cut China's lead at the top of the medal table to five as they collected four golds on day 13 of the Games.

Coming into Thursday's events, China boasted a seven-gold buffer as leaders but that was reduced by the USA's Katie Nageotte in the women's pole vault and Ryan Crouser in the men's shot put – the latter of which became a back-to-back Olympic champion.

More golds followed for the USA, with Nevin Harrison winning the women's single canoe 200m sprint – her country's first medal in either canoe or kayak sprint since 1992 – and David Taylor succeeding in the men's 86kg freestyle wrestling in the last second.

After shooting a blank the previous day, China ensured a five-gold gap going into Friday as the women's table tennis team continued their dominance, overcoming Japan to secure their fourth gold in four consecutive Games.

The table-toppers have now won all four of the women's diving events in Tokyo, too, as 14-year-old Quan Hongchan set a world record in the 10m platform, making it a China one-two with fellow teenager Chen Yuxi.

Defending Olympic champion Risako Kawai, who is also a three-time world champion, triumphed once more in the women's 57kg wrestling freestyle, meaning early leaders Japan remain in third with a gold count of 22.

Their 17 gold medals at the Games with three days to go equalled Australia's best-ever haul, matching the total they collected at Athens in 2004.

The Russian Olympic Committee leaped up a spot to fifth as Zaur Uguev was crowned champion in the men's 57kg wrestling freestyle and Albert Batyrgaziev fought to gold in the men's featherweight boxing.

Great Britain, who now boast 16 medals after winning just the one event on Thursday, slipped back down to sixth position with Matthew Walls' omnium gold ending Team GB's frustrating unsuccessful spell in the cycling track events. 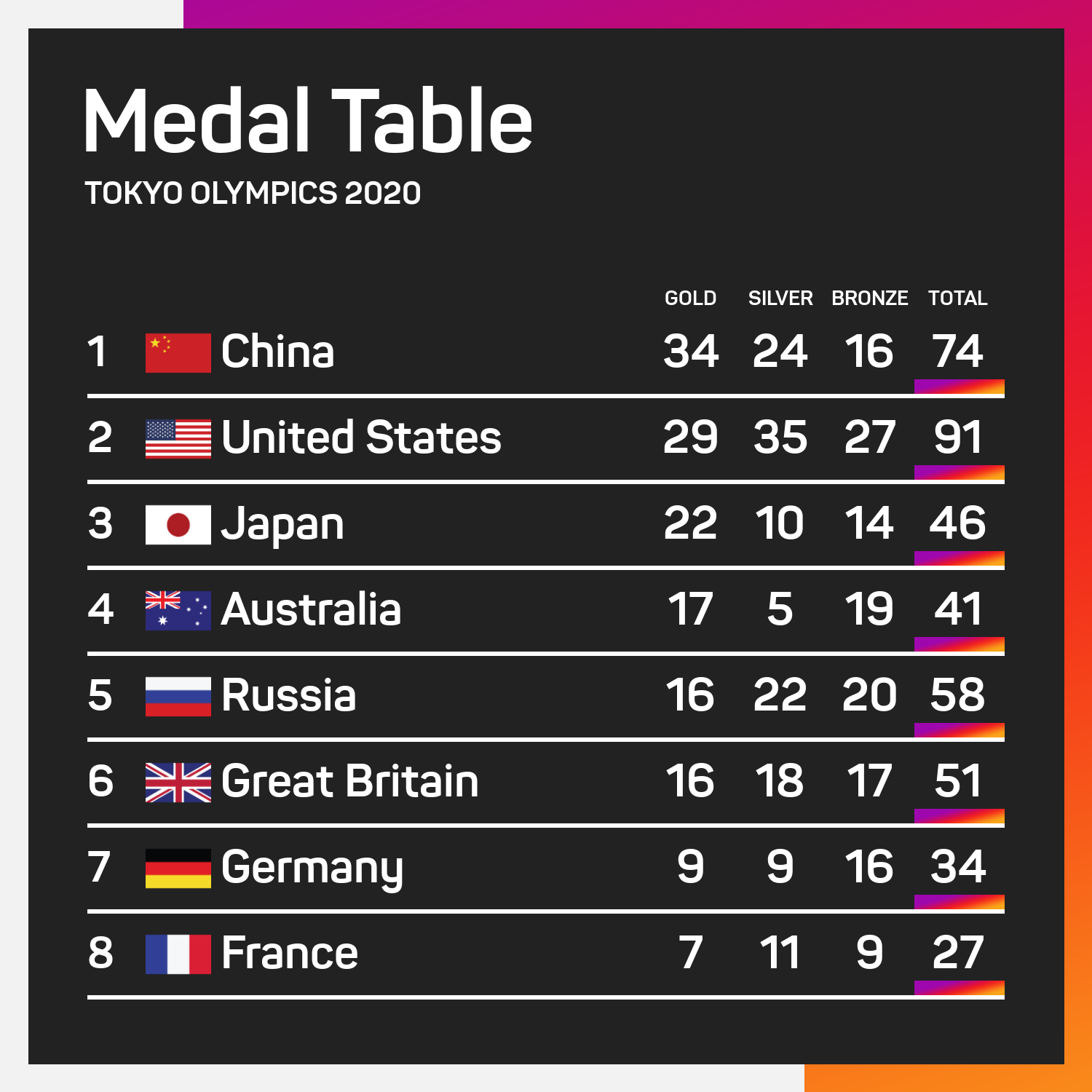 Vuelta a Espana: Roglic unrivalled as he seals hat-trick in style

Vuelta a Espana history was secured by Primoz Roglic as he claimed La Roja for the third straight year.

Vuelta a Espana: Roglic closes in on victory with second-place finish behind Champoussin

Olympic chiefs and NHL officials have agreed terms for the release of elite stars from the North American league for China's 2022 Games.

Primoz Roglic strengthened his lead in the general classification after finishing second to Miguel Angel Lopez on stage 18 of the Vuelta.