England have handed Gareth Southgate a two-year contract extension, with his tenure to date suggesting they are on the right track.

Gareth Southgate has signed a new contract with England until after Euro 2024, at which point he will have been in charge for almost eight years.

While it remains to be seen what state the Three Lions are in at that point, it is fair to say their current trajectory suggests a positive outcome.

Shortly after finding himself moved into the top job back in 2016, Southgate surmised he had inherited "a mess" – yet, in the following five years England have come within touching distance of ending that long wait for silverware.

The drought has not been ended, and so Southgate's job is far from finished, but he has got at least another two opportunities.

And on the evidence of the progress he has made, there is much reason for hope.

We're delighted to confirm that Gareth Southgate has extended his #ThreeLions contract through to 2024. pic.twitter.com/X3SGaU168f

Sam Allardyce's reign as England manager lasted just 67 days, with the Three Lions playing one match in that period before he resigned in disgrace after being covertly filmed by a British newspaper while making a slew of controversial statements, which included talk of breaching FA rules.

Southgate, in charge of the Under-21s at the time, stepped into the breach in late September to assume a temporary role, leading England to a 2-0 win over Malta in his first game.

67 - Sam Allardyce was in charge of England for just 67 days and leaves having won his only game in charge. Exit. pic.twitter.com/uw0ZTJRtKr

England's form during Southgate's 'caretaking' was decent, if not spectacular, but the FA clearly saw enough promise in how he conducted himself and dealt with the players. He was appointed on a full-time basis on November 30.

In a real show of faith, Southgate was handed a four-year contract – and to be fair to all parties, there has arguably been nothing but progress since.

The Three Lions qualified for the 2018 World Cup in convincing fashion, dropping just four points in their 10 matches as they finished eight points clear of second-placed Slovakia.

Southgate then received a massive vote of confidence in December when, shortly after being drawn alongside Belgium, Tunisia and Panama in Russia, then-FA chief executive Martin Glenn insisted the former Middlesbrough man would remain in charge regardless of how England fared at the World Cup.

Although England finished behind Belgium, they cruised through their World Cup group. Colombia pushed them all the way in a gruelling, physical last-16 tie, but the Three Lions progressed via their first ever penalty shoot-out victory at the tournament.

They then saw off Sweden in the quarter-finals as Southgate became the first England manager since Bobby Robson in 1990 to reach a World Cup semi-final.

Hopes of ending a long wait for success that stretched back to 1966 were ended by Croatia, but at least Southgate had England fans dreaming again.

The inaugural Nations League presented another opportunity for England to claim only a second ever international title at senior level – they finished top of their group and qualified for the Finals in Portugal.

A 3-1 defeat to the Netherlands ended their run, though their penalty shoot-out win over Switzerland at least secured them their first third-placed finish in a tournament since Euro 1968.

Euro 2020 qualification was confirmed with an emphatic 7-0 win over Montenegro in England's 1,000th match, and optimism was swirling all around the Three Lions ahead of a tournament that presented the opportunity of potentially playing most of their matches at Wembley.

Well, that did not quite work out... The coronavirus pandemic put Euro 2020 on hold for 12 months, meaning England were not in action again until September in the second edition of the Nations League.

This time, progression to the finals did not materialise as defeats to Denmark and Belgium proved costly.

Euro 2020 finally arrived… in 2021… but it was still called Euro 2020. Semantics aside, there was much to cheer about for England as they reached a first major international final since 1966.

That run was built on the foundation of a solid defence that let in just one goal en route to the final – in fact, Jordan Pickford became the first goalkeeper in European Championship history to keep five clean sheets across the first five matches.

England's home comforts at Wembley almost certainly played a part, though ultimately Italy prevailed in a penalty shoot-out in the final following a 1-1 draw after extra time. Nevertheless, it was another positive step for Southgate's Three Lions.

2 - Gareth Southgate will be just the second manager to take charge of England in the semi-final of both the World Cup and the European Championship, after Alf Ramsey in 1966 and 1968. Lion. #EURO2020 pic.twitter.com/PuVqM6RDir

During the Euros, Southgate received another vote of confidence from FA higher-ups that he was going to have his contract renewed regardless of how well they did after the group stage, so Monday's announcement was hardly a surprise.

But the confirmation was at least held off until England had secured their place at Qatar 2022, with their World Cup qualification campaign culminating in back-to-back thrashings of Albania and San Marino.

50 - Following debuts for Aaron Ramsdale and Conor Gallagher this evening, Gareth Southgate has handed 50 players their senior England debuts - the first manager to do so for the Three Lions since Bobby Robson (64). Newbies.

But having reached the semi-final and final of their past two major tournaments, expectations will be sky-high for England in Qatar – it would be fair to say, anything short of a semi-final spot will be deemed a disappointment.

That in itself is testament to the work Southgate has done during an immensely positive five-year tenure. 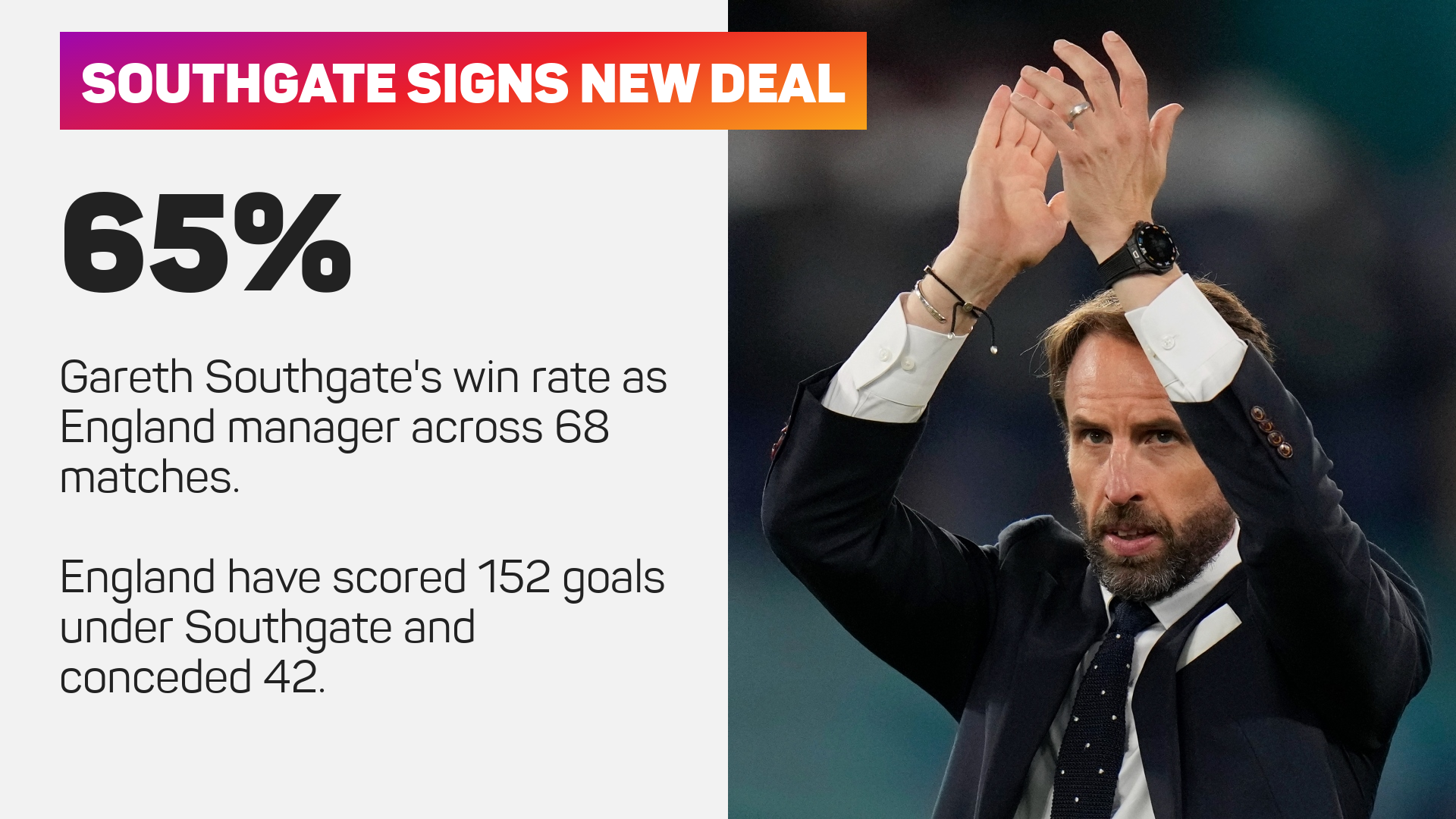 Paris Saint-Germain will once again be without defender Sergio Ramos when they face Lens in Ligue 1 this weekend.

Diogo Jota looks the part for Liverpool this season and has already bagged some priceless goals as he prepares for a return to Wolves.

Thomas Tuchel is not surprised Ralf Rangnick may have taken a call over the Chelsea job, but hopes it didn't come soon after he took charge.

Manchester City are flying high in pursuit of top spot in the Premier League as they prepare to visit Watford on Saturday.

World number seven Bryson DeChambeau moved into the lead at the Hero World Challenge, but Collin Morikawa is in hot pursuit.

Lee Zii Jia should fancy his chances to reach the men's singles final of the BWF World Tour Finals after being drawn against Thailand’s Kunvalut Vitidsarn for Saturday's semi-finals.