Liverpool's confusing season continues. Beating Napoli 2-0 looks a dazzling result when set in a certain context, yet utterly meaningless in another.

Two tap-ins ended Napoli's unbeaten run that stretched back to April, but Liverpool needed to win by four goals to pip their visitors to top spot in Champions League Group A after a shocking September night in Naples.

So Napoli advance to the last 16 as group winners, Liverpool joining them as runners-up, and that was more or less what everyone expected from the first minute of this tussle.

But just for a moment, Mohamed Salah's match-winning strike meant the world, and Darwin Nunez's last-gasp second goal of the game put a red cherry on the cake.

Liverpool were not English football's down-and-outs before this game, but some would have had them heading that way after those rotten league defeats plunged them firmly into the mid-table mud.

And this was most certainly not the old Liverpool. That team has gone for now, but Klopp commanded his charges to never "lose sight of our own qualities and our own potential", insisting they "can turn things around" and describing it as their "responsibility" to do so.

He urged the players to "change the perception that exists" of them, to summon their "bravest face" for the rest of Europe to witness, and on this night they just about obliged. 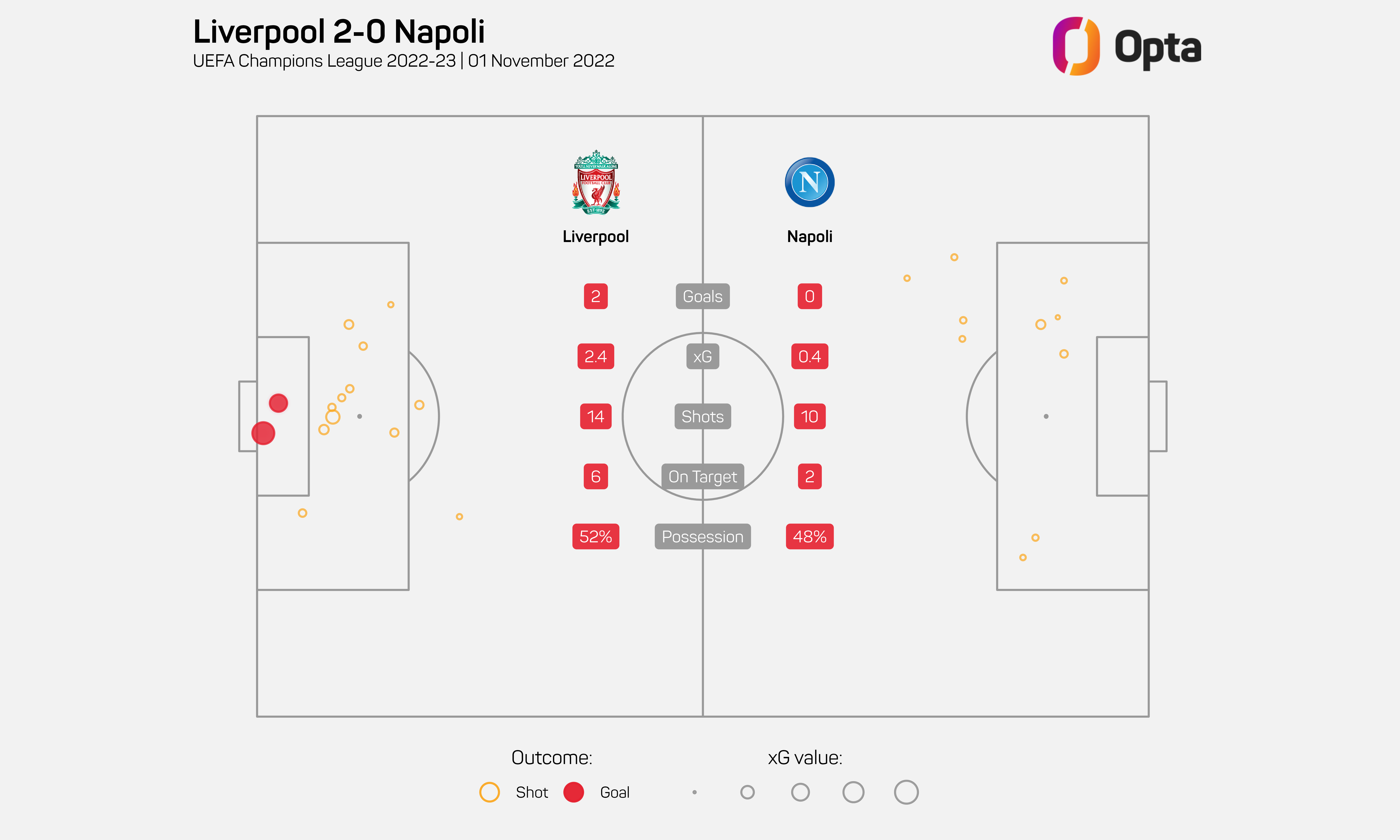 The last time Napoli visited Anfield, on November 27, 2019, it was a meeting of soaraway league leaders and a team in crisis. Liverpool led the Premier League by eight points from their nearest rivals, who at that point in the season were Leicester City.

Napoli, meanwhile, were in disarray after first-team players rebelled en masse and quit a training retreat just days before the Anfield visit. That getaway was ordered by club president Aurelio De Laurentiis and there were reports of heavy fines for those that fled.

On the pitch back on that occasion, Napoli were without a win in six matches in all competitions as they arrived in Liverpool. Carlo Ancelotti was a fortnight away from the sack, while in the present day it is Klopp's position that appears at its most endangered in years.

The game finished 1-1 three years ago, Liverpool coming from behind in what one press box colleague that night described to me as the Reds' "worst performance of the season".

Liverpool went on to win the Premier League, their first domestic league title triumph since 1989-90.

Napoli are presently chasing their first Serie A crown since... 1989-90. A day after Halloween, such parallels were almost spooky, these teams seemingly heading in opposite directions.

So what did Tuesday's rematch bring? Well, firstly, a meeting of soaraway league leaders and a team in crisis.

As Liverpool's form goes from bad to worse in the Premier League, Napoli are racing away in Serie A, five points clear of second-placed Atalanta, whom they face on Saturday. They were on a 13-game winning streak ahead of this tussle, including a 4-1 mauling of Klopp's men back at the Stadio Diego Armando Maradona.

Ahead of kick-off, Klopp's agent dismissed a theory the German manager could resign, pointing to a contract that has almost four years to run. This was Klopp's 100th Champions League game, across his time with Borussia Dortmund and Liverpool, making him the first German boss to reach that landmark, but it arrived at a dark hour in his Reds reign.

58 - Liverpool boss Jürgen Klopp became the seventh manager to take charge of 100+ UEFA Champions League games, while only Pep Guardiola (61) has more wins from his first 100 games in charge in the competition than Klopp (58). Elite. pic.twitter.com/kg2TzqRmqL

What could he, and what could we, hope to learn? What was needed from Liverpool was a performance, something to carry into the Premier League games against Tottenham and Southampton that come before the World Cup break.

Liverpool right-back Trent Alexander-Arnold, at 24 years and 25 days, became the youngest player in the club's history to tot up 50 Champions League appearances.

In his landmark outing, Alexander-Arnold was confronted by a defender's worst nightmare in Khvicha Kvaratskhelia, the young Georgian winger who is taking Europe by storm this season and shone in the first half here before fading.

Leo Ostigard thought he had headed Napoli ahead when he powered in a free-kick from Kvaratskhelia in the 53rd minute. In the 57th minute, the goal was disallowed for offside, with VAR seemingly operating at traction engine pace.

Napoli had never won away from home against an English side in European competition, drawing three times and losing on eight of their previous visits. It was looking like this might be the night they ended their wait.

And then, with five minutes plus VAR timing remaining, Salah prodded in from a foot out after Nunez's header from a corner was saved on the line.

Anfield roared, Luciano Spalletti frowned, and Jurgen Klopp allowed himself a smile before hugging the substituted Curtis Jones. Nunez tucked in from even closer range deep into stoppage time, and suddenly it was songs and good times again at the famous old ground.

Napoli should be fine and keep winning in Serie A. They impressed again, but perhaps slackened off once it became clear Liverpool would not be hitting four past them.

1 - For the second time in their history #Napoli finished at 1st place in their group stage in a single Champions League season, after 2016/17. Peak.#LiverpoolNapoli #UCL pic.twitter.com/XaBa1KACNo

Quite what happens next for Liverpool is anybody's guess. They could yet head into the World Cup break in the Premier League's bottom half, or this might be a turning point.

This result and performance was "a really good reaction", according to Klopp. "I'm really happy," he told BT Sport.

His team have won five Champions League games in a row, so why wouldn't he be happy? Ah yes, the Premier League.

With Cristiano Ronaldo off the books, his absence should not deter potential new owners for Manchester United, believes a financial expert.

With a goal in each of the Netherlands' opening two World Cup fixtures, Cody Gakpo is said to have caught the eye of the world's top clubs.

Both owners of Manchester United and Liverpool are open to selling up, and Kieran Maguire thinks interest could come from many areas.

Milan and Portgual winger Rafael Leao must become "ruthless" and "forge his character" according to ex-Rossoneri defender Marcel Desailly.

With his career at the Red Devils over, Cristiano Ronaldo is on the hunt for a new club – and could make a switch to Saudi Arabia.

With Manchester United and Liverpool attracting interest, the private sector in Saudi Arabia would have government backing for any bids.

Two significant departures from Liverpool's hierarchy have been reported, with Jamie Carragher concerned on the impact it could have.

Rumour Has It: Man Utd to make January move for Barcelona's Depay as Ronaldo replacement

Memphis Depay could return to Old Trafford, with the Red Devils ready to move for a Cristiano Ronaldo replacement in January.

David Johnson, the former Liverpool and England forward, has passed away at the age of 71, with Kenny Dalglish among those paying tribute.

Spain 1-1 Germany: All to play for in Group E after Fullkrug salvages a point

The battle to qualify from World Cup Group E will go down to the wire after Germany and Spain played out a draw in Doha.