Liverpool fans have another three years of Mohamed Salah to look forward to. Stats Perform looks at the numbers behind his Anfield career.

Mohamed Salah committed his long-term future to Liverpool on Friday by signing a new three-year deal.

The Egypt international was due to be out of contract at the end of the upcoming season, leading to strong links with a move away from Anfield.

However, out of the blue, Salah has penned an extension to – temporarily, at least – bring an end to speculation over his future.

After losing Sadio Mane to Bayern Munich, albeit with Darwin Nunez signed as a replacement of sorts, tying down Salah is a major boost for Liverpool ahead of the new season.

Here, Stats Perform looks at just how important Salah has been for Liverpool over the past five years, and how his record compares to Europe's other elite attackers.

It is difficult to remember now, but Salah's arrival from Roma in a deal rising to £43million raised more than a few eyebrows due to his disappointing earlier spell with Chelsea.

Six major honours later, including one as a key part in the club's first Premier League title triumph, and Salah will go down as one of Liverpool's all-time greats.

The 30-year-old has made 254 appearances for the Reds in total, 235 of those being starts, and has scored 156 goals while assisting 58 more.

Those 156 goals rank him ninth on the list of Liverpool's record scorers, with considerable ground to make up on Ian Rush at the top of that list with 346 goals. 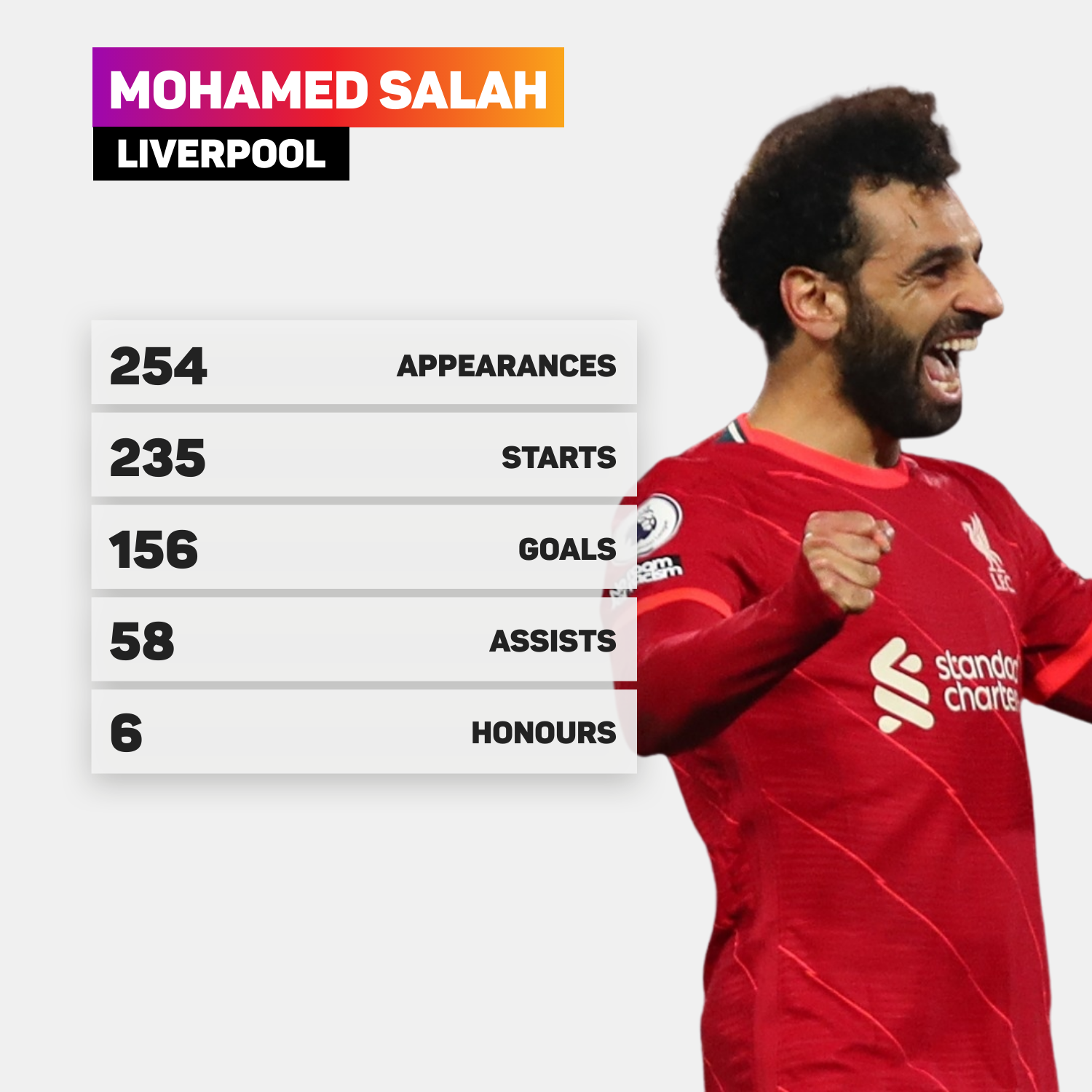 CLOSING IN ON GERRARD RECORD

Salah might struggle to overhaul Rush, but he will also have another record in his sights when the 2022-23 campaign gets up and running next month.

With 164 direct goal involvements in the Premier League, Salah trails only Steven Gerrard (212) among Reds players in the competition in that regard.

Kylian Mbappe, seen by many as the most desirable player in world football, is fourth on that list on 163 goal involvements, while Ciro Immobile is fifth with 159.

Salah has scored 118 goals for Liverpool in the Premier League alone, which is 13 more than next-best Harry Kane among all clubs since the start of the 2017-18 season.

The former Basel forward also ranks top for minutes per goal among those to have played at least 100 times (126 minutes per goal), shots (678) and touches in the opposition box (1,575).

However, one metric he does not lead is assists, with Manchester City's Kevin De Bruyne boasting 58 to Salah's 46. 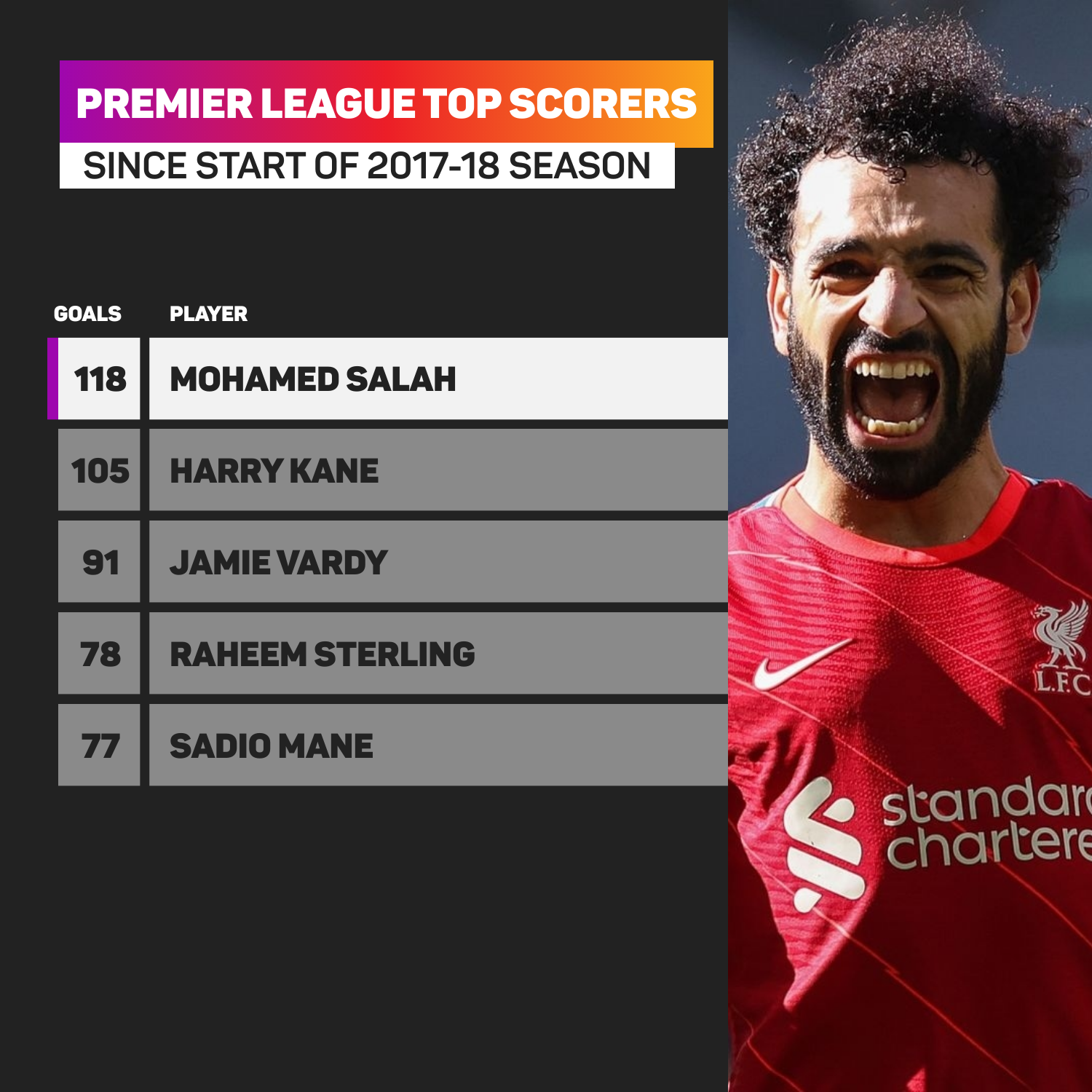 MORE TO COME FROM MO

Salah's output has been consistent across his five years at Anfield, starting between 45 and 49 games a season and registering double figures for assists in all but one of those campaigns.

He has remained a prolific scorer throughout, with a high of 44 goals in the 2017-18 season and a low – but still respectable – 23 in the 2019-20 campaign. The latter was the season when Liverpool won the Premier League.

The Al Mokawloon youth product has managed 31 goals in each of the past two seasons, while the 15 assists registered last season was a career-high.

All that suggests Salah is far from finished on Merseyside, and with a new three-year deal signed, Liverpool fans have plenty more to look forward to from their 'Egyptian king'. 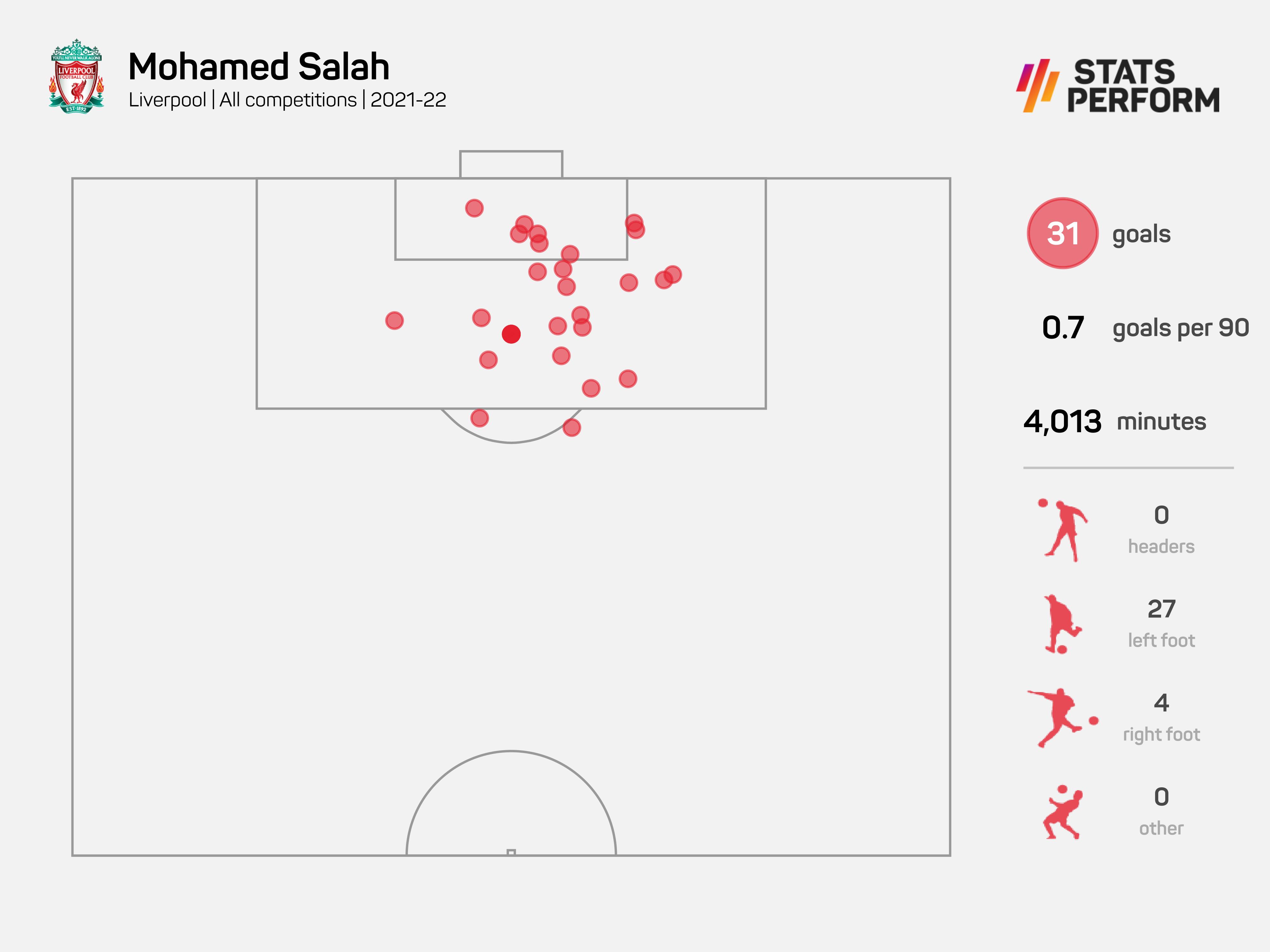 Domenico Berardi has drawn interest from both Juventus and Milan, but he has committed his long-term future to Sassuolo.

Cucurella vows to never cut his hair despite Romero incident

New Chelsea signing Marc Cucurella has no intention of cutting his hair, despite it playing a role in Tottenham's equaliser on Sunday.

Merseyside Police interviewed and cautioned Cristiano Ronaldo in relation to an allegation of assault and criminal damage.

Young defender Tanguy Nianzou has swapped the Bundesliga for LaLiga as he heads to Sevilla in a reported €20million deal.

Werner 'lost a bit of the fun' under Tuchel at Chelsea

Timo Werner did not take long to make an impact on his return to RB Leipzig, where he hopes to play more regularly than he did with Chelsea.

Mead, Oberdorf and Putellas in running for UEFA Women's Player of the Year award

The final three nominees for the 2022 UEFA Women's Player of the Year award have been announced.

Germany regular Thilo Kehrer has brought an end to a four-year spell with Paris Saint-Germain after joining Premier League side West Ham.

Emery braced for 'unwanted' exits amid Foyth to Barca talk

Unai Emery has no idea if Barcelona will pursue their reported interest in right-back Juan Foyth.

Emma Raducanu backed up her strong victory over Serena Williams with a lopsided display against two-time major winner Victoria Azarenka.

Nadal beaten by Coric in first match back since Wimbledon withdrawal, Kyrgios and Ruud knocked out

Rafael Nadal's return from a six-week layoff was spoiled by Borna Coric in Cincinnati with a three-set upset victory.

Debate rages over whether Novak Djokovic should be allowed to play in the US Open, with Taylor Fritz admitting he is conflicted.

World number six Simona Halep did not play her second-round match against Veronika Kudermetova after sustaining a thigh injury.

After missing the entire 2022 season, Kawhi Leonard is closing in on his long-awaited return from injury for the LA Clippers.

'Bombzquad is back!' – Wilder returns to the ring against Helenius in October

He has not fought since losing to Tyson Fury in October, but Deontay Wilder will take on Robert Helenius later in the year.

NBA legend LeBron James will continue at the Los Angeles Lakers for at least two more years after agreeing a lucrative new deal.

Rory McIlroy and Justin Thomas have praised Tiger Woods after several players met amid the ongoing battle between the PGA Tour and LIV Golf.