Portugal forward Cristiano Ronaldo broke yet more records on Tuesday and is now looking ahead to his side's clash with Germany.

Cristiano Ronaldo thanked his Portugal team-mates for helping him to surpass Michel Platini as the European Championship's outright all-time record goalscorer with his double against Hungary.

The 36-year-old scored a penalty late on in Tuesday's Group F clash to move one in front of Platini – who netted all nine of his goals in the 1984 edition – at the top of the competition's scoring charts.

He added to his tally in added time as Portugal, who opened the scoring through Raphael Guerreiro's 84th-minute strike in Budapest, became the first team in the history of the Euros to score three goals in the final 10 minutes of a game.

Ronaldo is also the first man to play and score in five separate European Championships and now has an even greater record in sight, the Juventus forward just three shy of Ali Daei's world record of 109 international goals.

The five-time Ballon d'Or winner will have an opportunity to close in on Daei's impressive tally when Portugal take on Germany in Munich in their next group outing on Saturday.

Speaking after Portugal's late win against Hungary in front of around 61,000 spectators – the most at any game at this year's tournament – Ronaldo said: "It was important to win. It was a difficult game.

"Hungary defended very well for 90 minutes. We managed to score three goals and I am very grateful to the team for helping me to score twice and collect the man of the match award.

"It was essential to go in with the right foot to give confidence. Now we have to just keep going, keep going. We will look to win the next game." 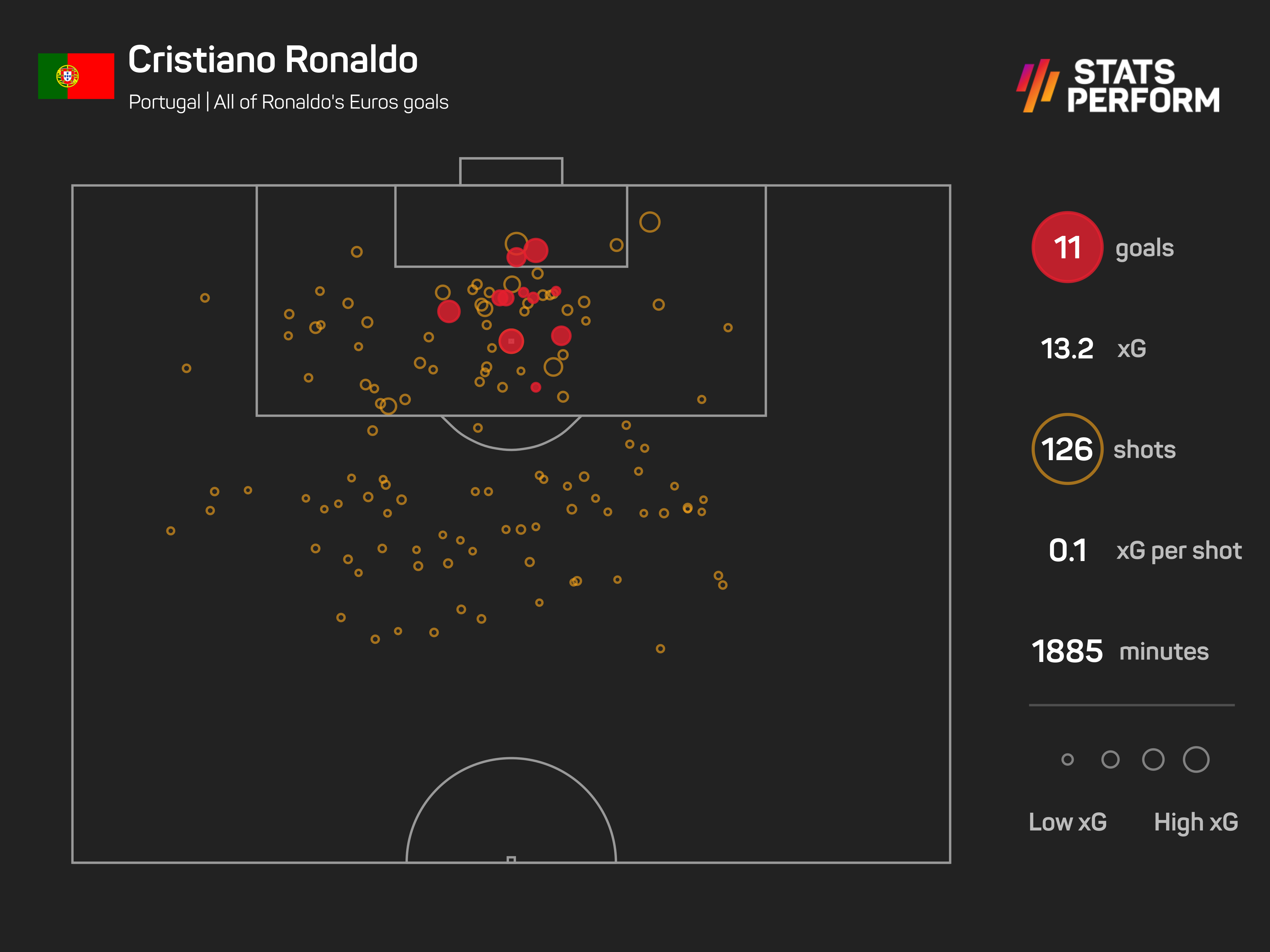 It looked like being a day of frustration for reigning European champions Portugal before a late flurry of goals gave them their joint-record margin of victory at the Euros, alongside 3-0 wins against Croatia in 1996 and Germany in 2000.

Head coach Fernando Santos was pleased with the way his side adapted to overcome their stubborn opponents as Portugal won their first game at a major tournament for the first time in six attempts.

"They kept putting two or three players on top of Cristiano," he told SIC Noticias. "Our strategy was not to cross, cross, cross. We had to look for different paths and we scored a goal, then Hungary started opening up some space.

"If we had scored earlier it might have been easier for us. We had chances to score but didn't, which caused a small period of anxiety, though we recovered well in the end by scoring the goals.

"It was a case of making Ronaldo more open because Guerreiro was getting stuck. Now we have two important games to come and we will try our best to get through this stage."

Hungary came within six minutes of taking a point off Portugal, but they are now winless in their past four games at the European Championship and have matches against France and Germany to come in an extremely tough group.

"I'm disappointed with the result," Hungary coach Marco Rossi said at his post-match news conference. "There wasn't much difference between the two teams. We didn't have luck today.

"But we have to show that we're men. We are representing Hungary and we have two more equally difficult games ahead of us.

"We were happy with the game until the 83rd minute, but then the three goals came. Maybe it was my fault for taking too much risk. I'm not sad about the performance, but disappointed with the result."

Ronaldo has ‘more responsibility’ at Juventus this season - Allegri

Massimiliano Allegri is expecting a lot from Cristiano Ronaldo in the head coach's first season back at Juventus.

Granit Xhaka has been linked with a move to Jose Mourinho's Roma, but Arsenal do not appear prepared to sell.

Lewis Hamilton had to recover from 14th to finish third at the Hungarian Grand Prix, as his bid to make Formula One history rolls on.

Abraham strikes to give Chelsea friendly win over Arsenal

It was a busy day in Tokyo for Stats Perform's Peter Hanson, who had a couple of lucky escapes on Sunday...

Italy claimed gold in the men's 100 metres final and high jump on a night when a long-standing triple jump world record finally fell.