Remembering the greatness of Arsene Wenger's Arsenal on the anniversary of his nightmare 1,000th game

The anniversary of his 1,000th Arsenal game is not one Arsene Wenger will remember too fondly, but his reign remains one to celebrate.

From "Arsene Who" to "The Invincibles", via all those things he did not see, Arsene Wenger brought a whole new lexicon to English football.

He also changed the way the game is viewed in England, completely altering the horizons of a largely closed-off football culture to turbo-charge its transformation into the home of the most diverse, globally respected and richest domestic league on the planet.

Wenger's legacy in the Premier League is beyond question and compare, and will continue to be celebrated on happier occasions than Monday's anniversary of his 1,000th game at the helm (eek! More on that below, if you can bear it).

Across more than two decades, Wenger's Arsenal broke records, moved homes and changed their image forever. Here we look back at some memorable moments and the numbers behind a towering sporting era.

Wenger's initial years in north London saw him skilfully combine the rugged English core of a team that previously enjoyed trophy success under George Graham with his more pioneering ideas – a blend that found full realisation with the 1997-98 double success.

"One of my jobs was to keep faithful to the qualities I had found here. I tried always to maintain the tradition and values of this club," Wenger said on the eve of his final game at Huddersfield Town in May 2018.

That was game 1,235 and game one took place on the other side of the Pennines against Blackburn Rovers on October 12, 1996.

Foremost among the qualities Wenger found at Arsenal were those of the man who would become the club's record goalscorer on his watch.

Ian Wright scored both goals to get the brave new era up and running with a 2-0 win over a club who had been champions of England a little over a year earlier.

Wright was 33 when Wenger arrived and injury curtailed his involvement in the glorious 1997-98 run-in. However, earlier in that season he broke Cliff Bastin's long-standing Arsenal club record and concluded his Gunners' career with 185 goals in 288 appearances.

179 - In a 4-1 Premier League win over Bolton in September 1997, Ian Wright’s hat-trick saw him overtake Cliff Bastin’s record number of goals for @Arsenal to become the top scorer in the club's history. He has since been overtaken himself by Thierry Henry. Legend. #OptaPLSeasons pic.twitter.com/HwzJX6UANV

The England striker's best mark would, of course, be surpassed by the great Thierry Henry, whose phenomenal haul of 228 all came on Wenger's watch.

Overall, there were five goalscoring centurions during the Wenger era, with Robin van Persie next on the list with 132 before his acrimonious departure to Manchester United in 2012.

That first taste of victory was one of 10 wins in 17 visits to Ewood Park, a win percentage of 58.8 per cent. Of the away or neutral venues Wenger's Arsenal played at in Britain, that ratio was only bettered by seven wins from 11 at Fulham's Craven Cottage (63.6 per cent).

Of course, there are other grounds far more synonymous with his reign, not least the home of Manchester United and his great rival Alex Ferguson.

Other than Highbury and the Emirates, Wenger managed his biggest number of Arsenal games at Old Trafford – 31 in total.

It was often an unhappy hunting ground, the scene of an 8-2 defeat in August 2011 that was his worst in terms of goals conceded and joint-heaviest by margin.

In March 1998, Marc Overmars nodded Nicolas Anelka's flick-on into his own path and steered beyond Peter Schmeichel for a 1-0 victory that proved pivotal in that season's title race.

Another iconic Arsenal moment came in May 2002, when Sylvain Wiltord pounced to beat compatriot Fabian Barthez and the Gunners secured Premier League glory on United's own patch.

There were more recriminations than celebrations in September 2003 after an ill-tempered 0-0 draw between the sides. However, had Ruud van Nistelrooy not crashed a penalty against the crossbar – much to Martin Keown's contorted, vein-popping satisfaction – Arsenal would not have been Invincibles.

7-up and springing Prague

An away ground not quite as synonymous with Wenger is the Madejski Stadium.

Nevertheless, Reading are the opponent Arsenal played most often while maintaining a 100 per cent record under the Frenchman, winning 10 out of 10.

The most famous of these wins was a 7-5 triumph in Berkshire in October 2012, where Arsenal averted EFL Cup embarrassment in utterly berserk fashion.

After 35 minutes, Reading were 4-0 up thanks to Jason Roberts, a Laurent Koscielny own goal, Mikele Leigertwood and Noel Hunt. Afterwards, their manager Brian McDermott, a former Arsenal player, would reflect upon the "worst" defeat of his career.

Walcott reduced the arrears before the interval and the England winger's second of the match deep into injury time, after a goal from Giroud and one at the right end from Koscielny, forced an additional half hour.

Marouane Chamakh put Arsenal ahead for the first time in the tie and, although Pavel Pogrebnyak made it 5-5, the Moroccan forward scored his second after Walcott completed his hat-trick to crown what Wenger dubbed "maybe my greatest comeback", with a touch of understatement.

It was not the only time Arsenal scored seven under Wenger and the biggest wins of his tenure came when they kept the back door shut, with Everton, Middlesbrough and Slavia Prague all beaten 7-0 in a spell spanning May 2005 to October 2007.

Coincidentally, Slavia's neighbours Sparta are next on Wenger's perfect record list after Reading, losing six out of six against Arsenal in the Champions League.

Over time, an underlying warmth revealed itself in the Wenger-Ferguson rivalry. It was hard to say the same when it came to his jousts with Jose Mourinho.

Wenger was a "voyeur" and a "specialist in failure" according to Mourinho's acidic tongue and the older man could be similarly biting.

"When you give success to stupid people, it makes them more stupid sometimes and not more intelligent," he witheringly observed after Mourinho announced himself in English football with his 2004-05 Chelsea sweeping all before them.

It will therefore have stung deeply when Wenger's 1,000th game in charge of Arsenal saw them ransacked in a 6-0 demolition at Stamford Bridge on March 22, 2014.

If the manner of the loss was humiliating, the defeat itself was one to be expected. In 19 encounters with Mourinho, Wenger won two – a 10.5 per cent win ratio that is by far his worst against another manager, with 30.6 percent thanks to 15 victories from 49 attempts versus Ferguson next on the list. 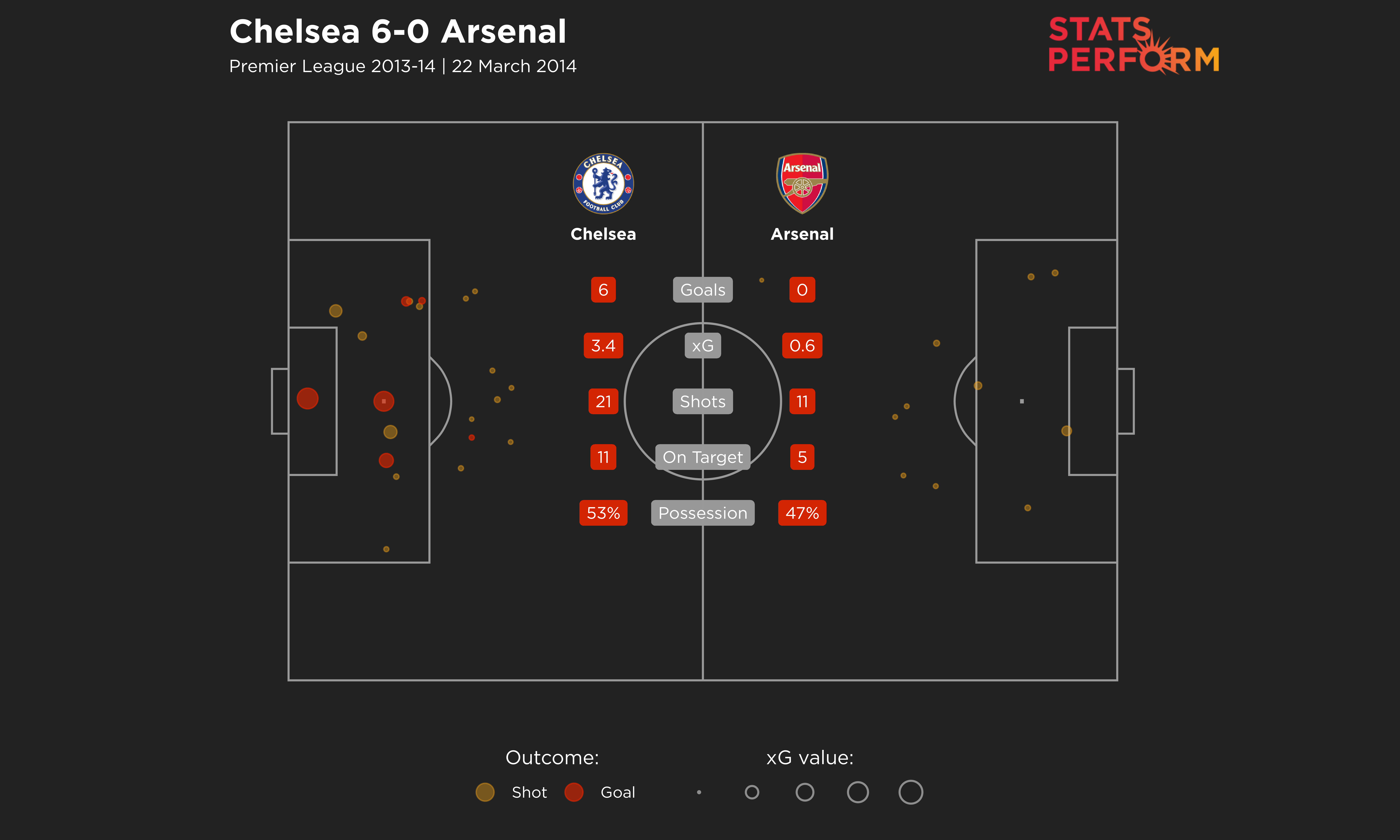 Those paltry returns against the self-styled 'Special One' mostly come within a wider context of decline.

Wenger's first decade at Arsenal – spanning 1996-97 to 2005-06, their last at Highbury – yielded 11 trophies out of the 17 he won overall in north London, including all three Premier League titles.

However, Arsenal's win percentage held up after the move to Emirates Stadium, dipping fractionally to 57 from 57.6 per cent. They also scored slightly more often, with their goals-per-game figure up from 1.8 to 1.9 in the latter period.

By this point, Wenger was joined in the Premier League by the finest coaching talents from across Europe. It was a far cry from his own appointment, when he became only the fourth manager in England's top flight to hail from outside the British Isles.

Mourinho, Pep Guardiola, Jurgen Klopp and others had all come along to raise the bar Wenger set to even greater heights, although he would enjoy one last defining triumph at the expense of one of their contemporaries.

Chelsea entered the 2017 FA Cup final as hot favourites to complete the double after romping to Premier League glory in Antonio Conte's first season in charge.

A 3-0 defeat to Arsenal the previous September inspired Conte to revert to his favoured 3-4-2-1 system and was the catalyst for a dominant revival.

This turn of events seemed to encapsulate the futility of the late Wenger years, when every small success appeared only to serve as a precursor for a greater disappointment.

You could even say the same for his last final in the competition he dominated, give it preceded his lowest ever Premier League finish of sixth in his farewell campaign.

But Arsenal were stirringly brilliant that day at Wembley. Per Mertesacker was wheeled out of cold storage to put in a colossal display at centre-back as Alexis Sanchez and Aaron Ramsey sealed a deserved 2-1 win.

Ramsey ranks 10th among Arsenal's top scorers of the Wenger era with 58 and two of those were FA Cup final winners, the Wales midfielder also netting decisively against Hull City in 2014.

Those were Wenger's fifth and seventh successes in a competition he has won more than any other manager in history, where his incredible Arsenal tenure means his position is ensured for posterity.

Nuno backs Kane, insists goalless league start about the team not one player

Defenders Marcos Alonso and Joel Matip have had more touches inside the box this season than Harry Kane leading to criticism.

Chances were few and far between in the first leg of the all-Brazilian Copa Libertadores semi-final with only one shot on target.

As Mitch Langerak continues to flourish in Japan, Stats Perform looks at the numbers behind the Nagoya Grampus star using Opta data.