Real Madrid have not, yet, rounded off their pre-season. Carlo Ancelotti's team do not start their LaLiga campaign until Sunday, when they take on Almeria.

Yet at the Helsinki Olympic Stadium, the Champions League holders picked up where they left off just over two months ago – with European glory.

A 14th European crown came their way in Paris back in May, when Vinicius Junior's goal – combined with Thibaut Courtois' heroics – saw off Liverpool.

And on a comfortable summer's night in Finland on Wednesday, Madrid's assortment of superstars claimed the club's fifth Super Cup with a 2-0 win over Eintracht Frankfurt, as Ancelotti's decision to stick with the team that won at the Stade de France was repaid in full.

2-0 Madrid. Eintracht huffed and puffed, but Madrid had just too much. A Modric, Casemiro and Kroos masterclass. pic.twitter.com/FRoqos3ZKC

Eintracht, who defeated Rangers to win the Europa League last term, performed admirably, but shorn of Juventus-bound talisman Filip Kostic, the Bundesliga side could not cope with the power and quality at Madrid's disposal.

Not that it would have definitely been any different with Kostic in the team, as this was a game won mostly in midfield, that is where Madrid exerted their dominance. Though on the occasions when Eintracht did threaten, particularly in the opening 30 minutes when Courtois made two impressive stops, it would be easy to imagine Kostic, who crafted 420 chances, provided 56 assists and scored 30 goals across 167 appearances for the club after joining from Hamburg in 2018, would have helped their cause.

In a pre-match news conference on Tuesday, Luka Modric – 37 next month – was asked if he planned on asking Ancelotti to manage his minutes with the mid-season World Cup in mind.

"I speak to the coach every day, but not about that. The coach knows I like playing and I feel better when I play," Modric replied. "I'm feeling good, available to the team to give my all to help the team in every way. The World Cup doesn't change anything for me."

Benzema's statement rang true. Madrid's starting midfield three of Modric, Toni Kroos and Casemiro had a combined age of 98, yet surely covered every blade of grass between them, both on and off the ball.

Having spent much of the opening stages looking to drop into space and ping searching diagonals out to Vinicius Junior, who along with Federico Valverde and Eder Militao adds the effervescence of youth to the starting XI, Modric grew into the game as it wore on, finding the pockets of space only he can. 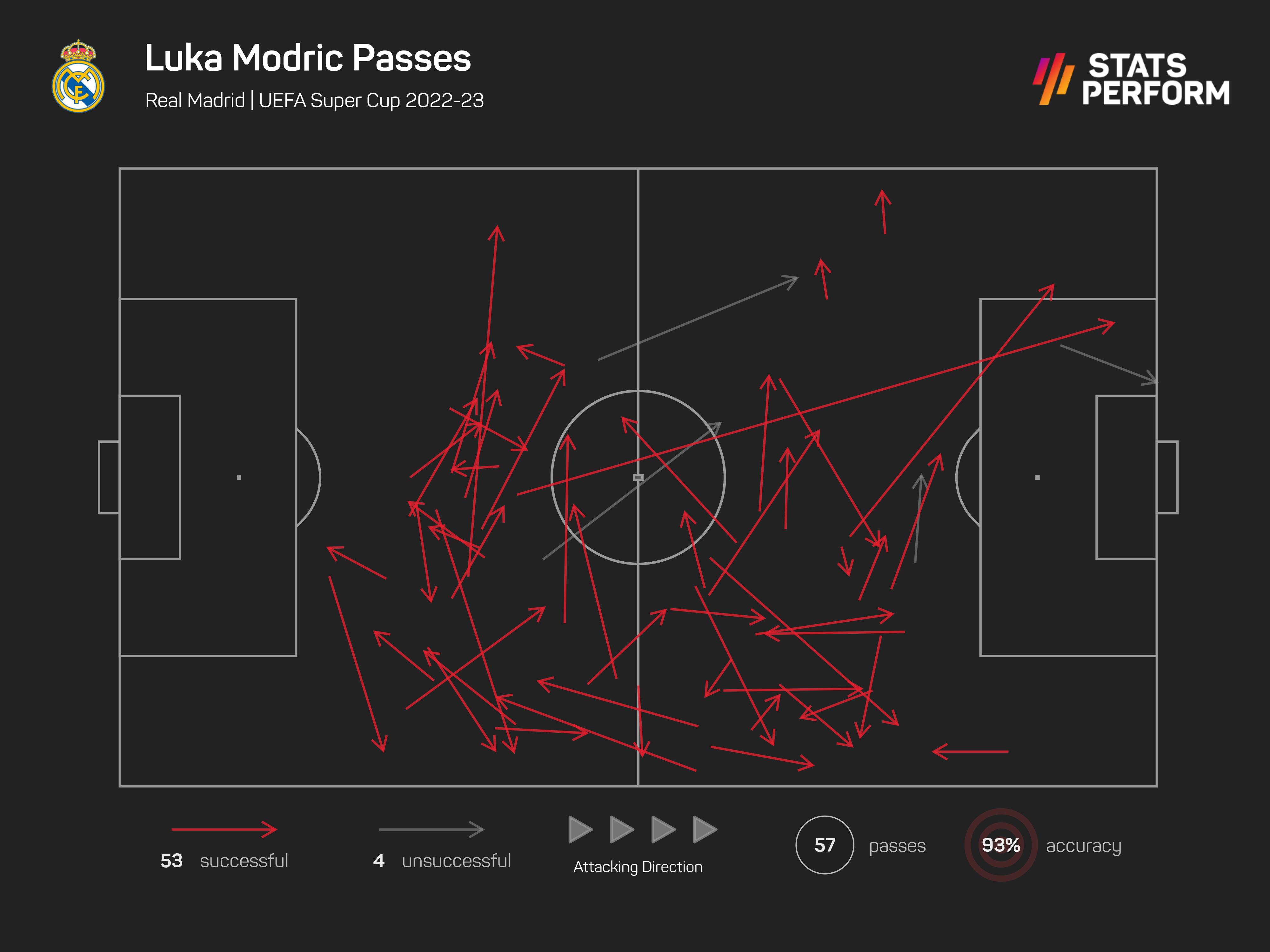 The Croatian's mercurial talents were on full show early in the second half, after David Alaba had put Madrid ahead – his tap-in having been teed up by a combination of Benzema and Casemiro.

In the space of five minutes, Modric linked up exquisitely with Benzema to find Ferland Mendy and create a chance for Vinicius Junior to test Kevin Trapp, who was well beaten from the next opportunity Modric teed up – Casemiro rattling the crossbar from the edge of the box.

Modric's race was run after Benzema made it 2-0 with his 324th Madrid goal (only Cristiano Ronaldo has scored more), and the playmaker headed for the bench having completed 53 of 57 passes (93 per cent), with two of those leading directly to opportunities, though those statistics do not tell the whole story. He was simply spellbinding at times, deft flicks and quick feet toying with Frankfurt's hopes and dreams.

And what of Casemiro? His tally of nine tackles led the game, with a sliding challenge on Jesper Lindstrom in the 51st minute a highlight.

Kroos, as Kroos does, went about his business efficiently, without breaking stride. He strolled off with five minutes remaining, making way for big-money signing Aurelien Tchouameni having had 120 touches, completed 97 passes and gained possession nine times, second only to UEFA's man of the match Casemiro (10). 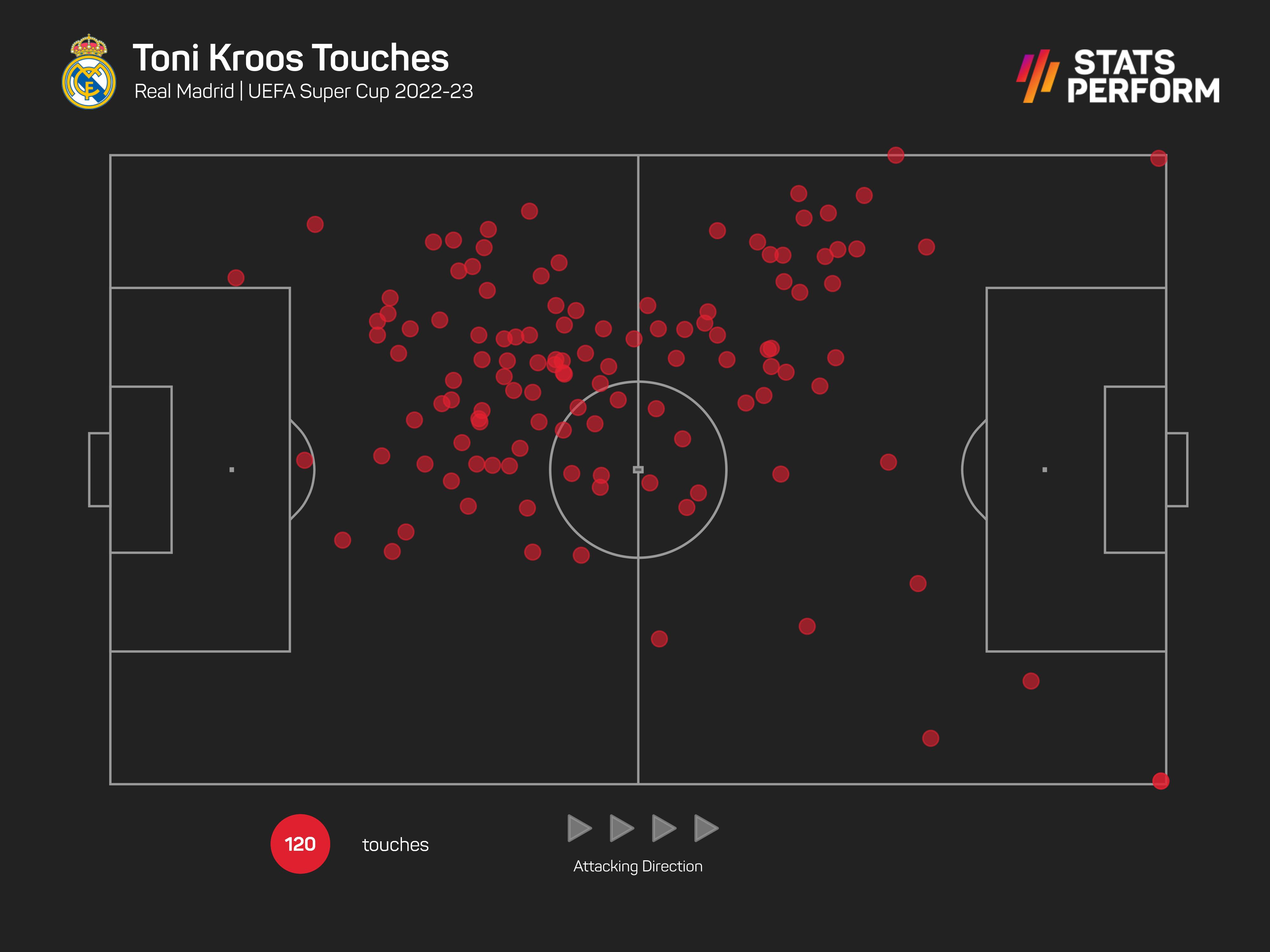 Ancelotti, who has now won the Super Cup a record four times after previous success with Madrid (2014) and Milan (2003, 2007), was able to change things up late on, with Antonio Rudiger joining Tchouameni for a competitive debut, but 34-year-old Benzema who lasted the duration.

Benzema's goal came from a familiar source. Vinicius found space down the left channel, drilled in a cross and his partner in crime was there to finish it off. The Brazil forward has now assisted Madrid's number nine 16 times.

It was he, as Madrid's new club captain following Marcelo's departure, who lifted the trophy. If this evidence, with a team still rounding off their preparations, is anything to go by, it will not be the last piece of silverware he lifts this season.

16 - Most assists by Vinícius Júnior with @realmadriden in all competitions to:

Rodrygo's goal delivered a fourth LaLiga win out of four for Real Madrid and earned him praise from head coach Carlo Ancelotti.

Joaquin is a club legend at Real Betis, and with his appearance against Real Madrid on Saturday, the 41-year-old matched a LaLiga record.

Rodrygo scored Real Madrid's winner as Carlo Ancelotti's team made it four wins from four to start their season.

Marcelo parted company with Real Madrid at the end of last season, and the veteran Brazilian defender is staying in Europe.

Real Madrid won LaLiga and the Champions League last season, yet Carlo Ancelotti feels they are better prepared for this campaign.

Rumour Has It: PSG to resume failed chase for Inter's Skriniar in January

Christophe Galtier missed out on Milan Skriniar but PSG have not given up on him with less than 12 months left on his contract.

Casemiro's departure from Real Madrid to Manchester United had not been anticipated by former midfield team-mate Toni Kroos.