The World Cup is just 100 days away, so Stats Perform has crunched the numbers to quantify each team's chances of success.

Fans' wait for the World Cup has, of course, been a little longer than normal this time around – ordinarily the tournament would've already been completed.

Nevertheless, the big kick-off is closing in with Qatar 2022 now just 100 days away – we're into the final straight!

As with any major tournament, predicting a winner in the build-up is just a natural part of being a football fan, even if it can often be a fool's errand.

But considering how integral statistics are to football these days, using data might just give you the edge, and that's where Stats Perform come in.

Our Artificial Intelligence team have used Opta's extensive data reserves to quantify each team's chances of winning the entire tournament.

Every match has been run through the Stats Perform World Cup prediction model to calculate the estimated probability of the outcome (win, draw or loss). This uses odds from betting markets and Stats Perform team rankings, which are based on historical and recent performances.

It takes into consideration the strength of each team's opponents as well as the difficulty of their respective paths to the final, plus the make-up of the groups and any relevant seedings heading into the knockouts.

Then, the rest of the tournament is simulated 40,000 times and analysed, providing the AI team with a percentage for each nation, showing the probability of them ultimately lifting the trophy at the Lusail Stadium on December 18.

Let's check out the results…

Suspend your disbelief! Yes, reigning champions France have the greatest probability of winning the World Cup this year, with our model giving them an almost 18-per cent chance of clinching a third title.

But let's not overlook how remarkable an achievement that would be. No team has retained the World Cup since Brazil in 1962, and the only other occasion of that happening was in the 1930s when Italy won it back-to-back.

France were the favourites heading into Euro 2020 but were ultimately disappointing – they'll need to do significantly better here otherwise their fate could be sealed by the dreaded winners' curse.

Each of the past four European winners of the World Cup have been eliminated in the group stages, a trend that began with Les Bleus in 2002. 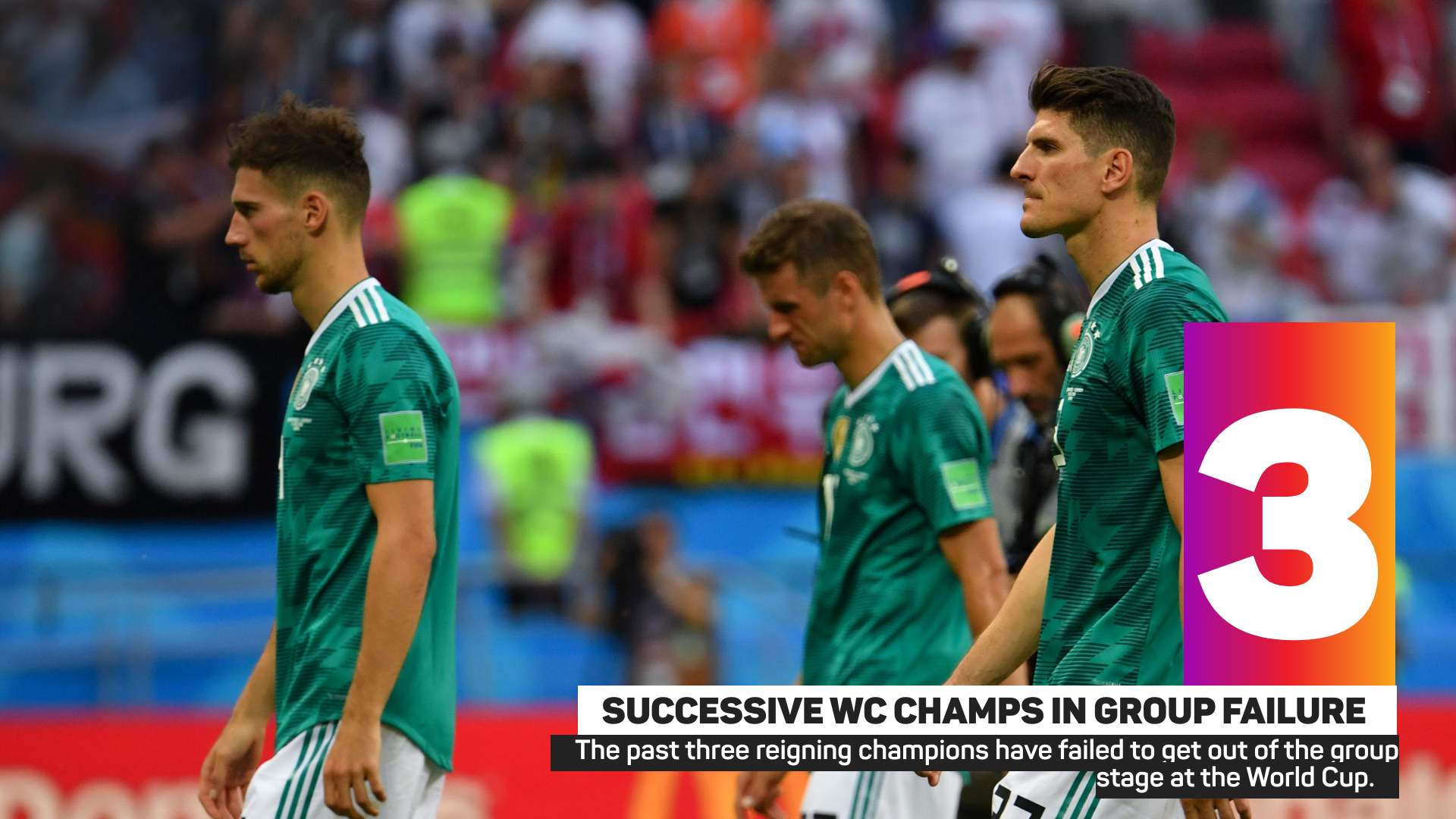 Another unsurprising entry. That's right, record winners Brazil come in at second in terms of likelihood of winning the World Cup.

Tite's side qualified with ease and clearly have an extremely talented group of players available to them – the problem is getting them all on the pitch at one time while retaining a cohesive and balanced shape.

If Tite can find the magic formula at the World Cup this time, at the very least you'd expect them to get beyond the quarter-finals, the stage they crashed out to Belgium four years ago in Kazan.

Failure, however, will mean Brazil's World Cup drought will stretch to 24 years by the time the 2026 edition comes around, and that would make it their joint-longest barren run in the competition since claiming their first title in 1958.

La Roja aren't the force they were as recently as 10 years ago, when they won a third successive major international tournament with victory at Euro 2012.

However, Luis Enrique has turned them into a side that is easy on the eye and capable of carving open the best teams – their main issue in recent years has been finding a reliable striker, and that'll likely be what determines how far they get in Qatar.

Either way, we can surely expect a better showing than they managed in Russia, where they were hindered by the sacking of coach Julen Lopetegui on the eve of the World Cup as a result of accepting a post-tournament role at Real Madrid.

The Three Lions almost won their first major international trophy since 1966 last year at Euro 2020, only to fall at the final hurdle against Italy.

Either way, few can deny it was a sign of progress: they reached the Russia 2018 semi-finals, the final at Euro 2020, so surely Qatar 2022 is theirs already?

Gareth Southgate has made England an effective tournament side, even if doubts remain over his ability to impose a style of play that sees the Three Lions take the initiative against the biggest teams.

Similarly, their performances in the first round of Nations League fixtures in June left a lot to be desired, but that won't stop expectations from soaring in Qatar.

Squeezing into the top five ahead of the Netherlands (7.7 per cent) are Belgium, who reached the semi-finals four years ago before being eliminated by eventual winners France.

It's fair to say this is likely to be the last opportunity for the Red Devils' so-called 'golden generation' to truly leave its mark on a major tournament – in fact, many original members of that Belgium generation have already retired.

While success for Roberto Martinez's side looks unlikely, they are a match for any team on their day, and our probability score recognises they are by no means out of contention.

THE REST OF THE FIELD

Netherlands and Germany (7.2) are hard on Belgium's heels in our predictor table, though in both cases fans might feel their squads have more to offer than their neighbours.

Both teams have solid blends of experience and youthful exuberance, while the two coaches have vast experience – Louis van Gaal needs no introduction, while Hansi Flick has been involved in the Germany setup for much of his coaching career.

But the teams many will be looking out for because of certain individuals are Argentina (6.5 per cent) and Portugal (5.1 per cent). 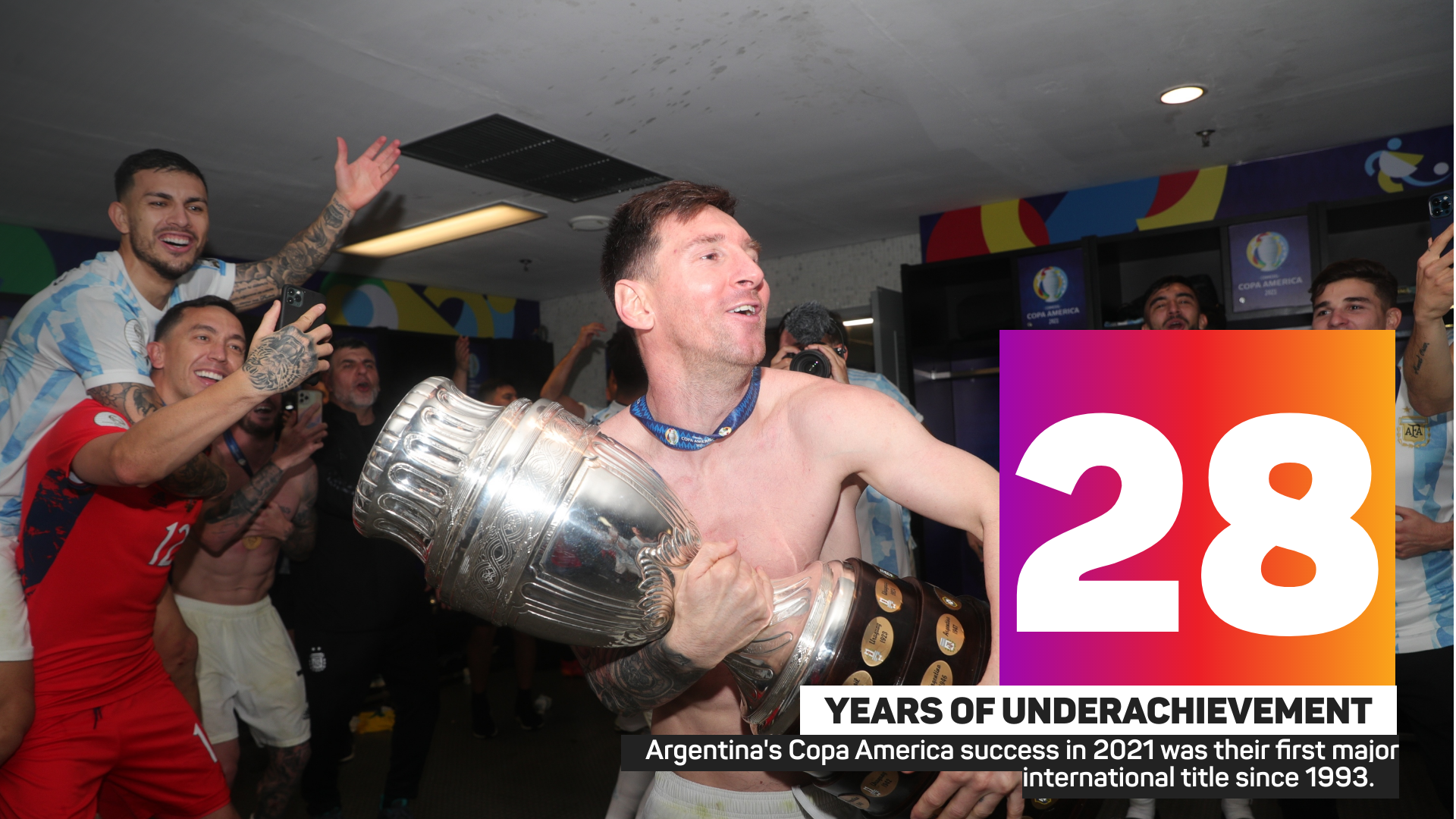 They are the only other two to be given more than a 2.3 per cent chance of World Cup success, and given the presence of Lionel Messi and Cristiano Ronaldo, they cannot be discounted.

Argentina have rebuilt since a somewhat shambolic campaign in Russia, with Lionel Scaloni inspiring La Albiceleste to their first Copa America in 28 years in 2021.

Messi was central to their triumph in that tournament, and now he's got the proverbial monkey off his back, there's hope Argentina could produce a respectable showing.

With Ronaldo 37 and Messi 35, it's unlikely either will play another World Cup. Given the tournament is synonymous with those generally regarded as the best ever – Pele and Diego Maradona – they will be desperate to crown their respective careers. 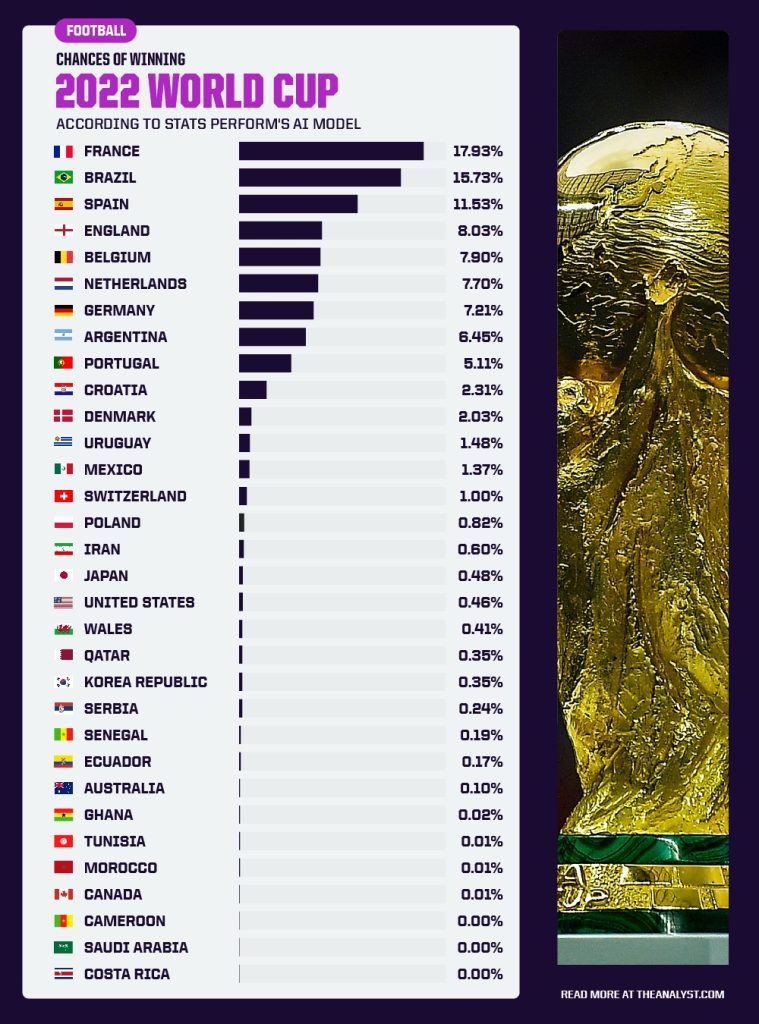 After impressing for Milan, Olivier Giroud wants to add to his 112 France caps at the upcoming World Cup in Qatar.

Cristiano Ronaldo will be treated the same as any Manchester United star by Erik ten Hag this season.

Rumour Has It: Cristiano Ronaldo agrees in principle to join Fenerbahce

With the transfer window shut in most of Europe's top leagues, Cristiano Ronaldo is now turning to Turkey as a potential landing spot.

Jonny Bairstow has enjoyed a wonderful 2022, but his season has been cut short by an injury that will see him miss the Twenty20 World Cup.

England hope to have a number of injury doubts fit in time for the T20 World Cup, with Chris Woakes and Mark Wood already touring.

Erik ten Hag said Cristiano Ronaldo will come into starting line-up calculations soon, after being used mainly off the bench this season.