Premier League Fantasy Picks: Son could be the man to bring Solskjaer's reign to an end

Son Heung-min has a decent recent record against Manchester United, while Callum Wilson is also worth considering for your team.

This weekend could perhaps spell the end of Ole Gunnar Solskjaer's Manchester United tenure, and opponents Tottenham have a player capable of causing real damage.

Elsewhere, the form of Manchester City's sort-of-striker Gabriel Jesus and Newcastle United's possibly-only-striker Callum Wilson make them worthy considerations for your fantasy teams for this weekend.

There is also a more surprising pick from Southampton who could offer some real value.

It was a signing that did more to raise supporter eyebrows than excitement levels, but Aaron Ramsdale is beginning to prove his worth for Arsenal.

Having grasped the number-one spot with two gloved hands, the former Sheffield United man boasts a save percentage of 80, having kept out 16 of 20 shots on target faced.

Given only Edouard Mendy can do better among goalkeepers to play more than 90 minutes this season, Ramsdale has surely earned a shot in your side.

Trent Alexander-Arnold is the only defender to create more chances in the Premier League this season (12) than Southampton's Tino Livramento (10).

Something of a revelation on the south coast, he could become just the third 18-year-old this century to start the first 10 games of a Premier League season after Micah Richards (2006-07) and Phil Jones (2010-11).

Since Watford have won just one of their past 13 league games with Southampton, Livramento seems worth a punt.

If you don't know by now that Trent Alexander-Arnold tends to get quite a lot of points for a defender, you've probably not been paying attention.

This season, the Liverpool star is ranked eighth in the Premier League for expected goal involvements (excluding penalties), while only Bruno Fernandes (34) has created more chances (25). And he's a right-back.

Alexander-Arnold might just be prime captain material for this weekend, particularly if you think the Reds can keep a clean sheet at home to Brighton and Hove Albion. 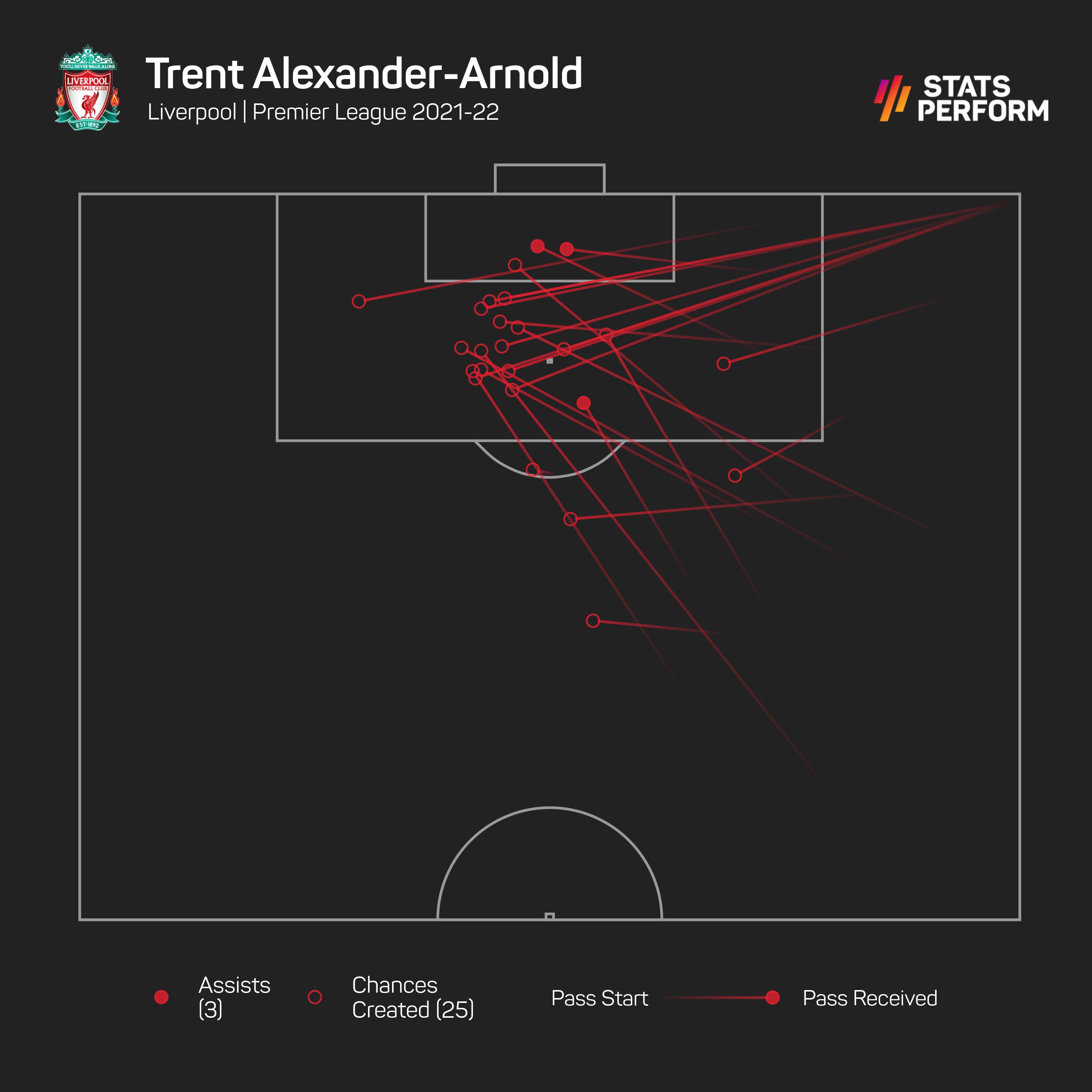 It's not all going swimmingly for Rafael Benitez at Everton, but Demarai Gray is looking like a real bargain, having joined for around £1.7million from Bayer Leverkusen.

With three goals and two assists in nine games this season, he has already matched his best tally for direct goal involvements in a single Premier League campaign.

He also happened to score the last time he played against Wolves, for Leicester City in January 2019.

Of Son Heung-min's 17 Premier League goal involvements in 2021, 13 of them have come at home, a tally bettered only by Bruno Fernandes (15).

The Tottenham star has developed a knack for playing against Manchester United, too. After going eight games without a goal against the Red Devils, he scored three and set up another in their two meetings in 2020-21.

Could he be the man to spell the end for Ole Gunnar Solskjaer?

Gabriel Jesus has scored three and assisted six goals in his most recent nine league starts for Manchester City. His five assists in 2021-22 means he is already just two shy of the most he has ever managed in a single season.

Saturday's game with Crystal Palace will be a special occasion for City, as it will be Pep Guardiola's 200th Premier League game in charge (naturally, his 146 wins in his first 199 matches is a record).

It's hard to look beyond a comfortable City win: they have lost only once to Palace in 12 league meetings, while that 3-2 defeat in December 2018 was the only one of their past 50 matches to kick off at 15:00 local time on a Saturday that has ended in defeat. 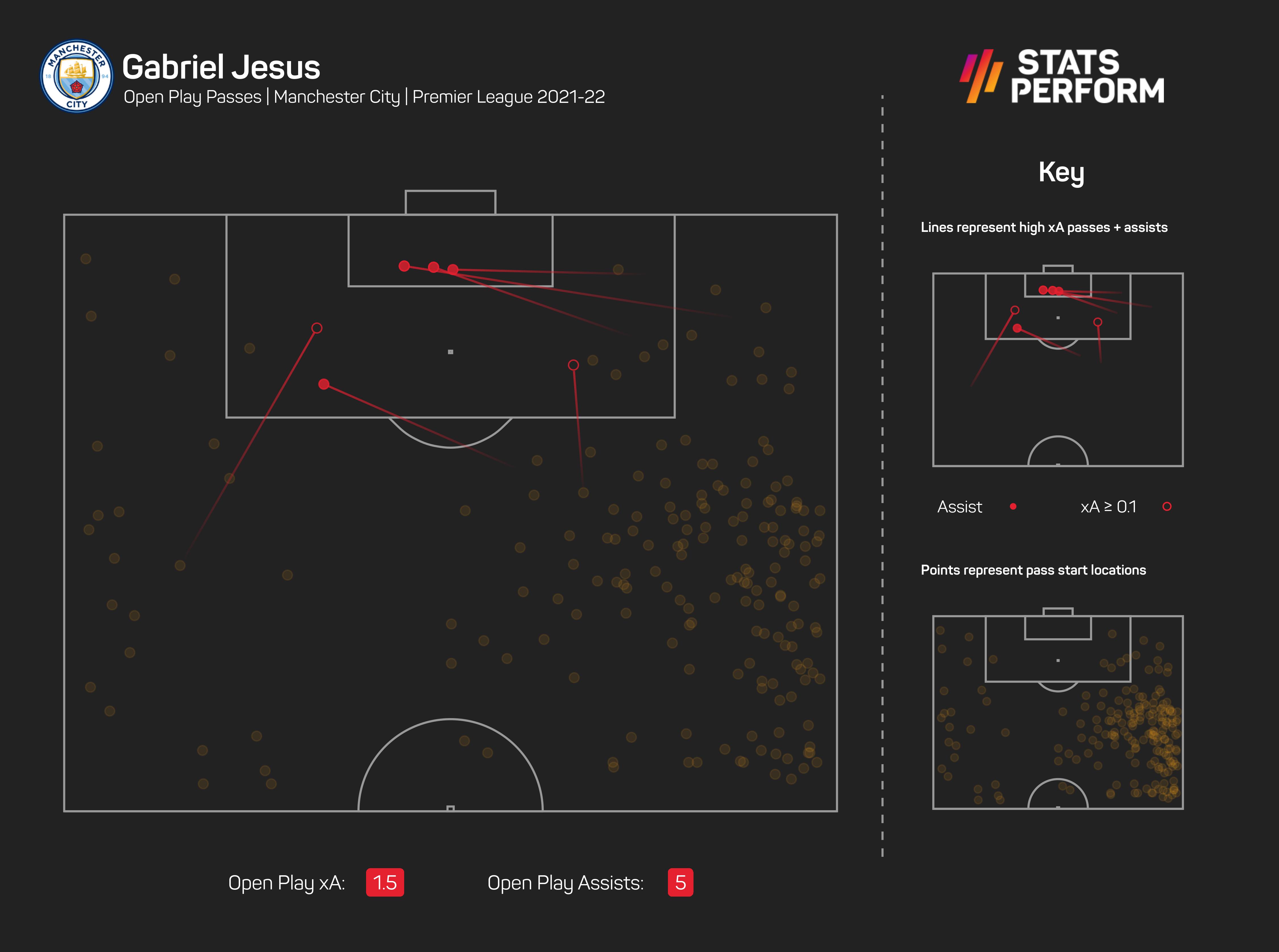 Plenty of star names could be on the horizon for Newcastle United, but Callum Wilson has looked determined to prove he has a place in the new era at the club.

The striker has six goals in his past six league games, as many as he managed in his previous 21, and is hoping to score for the fourth match in a row for only the second time in the Premier League.

Newcastle might be up against it to beat Chelsea, but the Blues have so far conceded just three times which is almost eight fewer than their expected goals-against total of 10.7. At some stage, that will have to give...

A quiet match for the Norway international is no cause for alarm, says Kevin De Bruyne after Erling Haaland's latest Manchester City turn.

Arsenal striker Gabriel Jesus was involved in all four of the Gunners' goals in a 4-2 victory over Leicester City on Saturday.

A fine performance from Kevin De Bruyne helped guide Manchester City to an easy victory over Bournemouth in the Premier League.

Yaya Toure has been handed a job in Tottenham's academy, while Simon Davies is back at Spurs.

Arsenal and Liverpool target Yeremi Pino could be sold by Villarreal, Emery admits

Arsenal have been touted as a potential destination for Yeremi Pino, and Unai Emery is unsure whether Villarreal can keep the winger.

Australia wilted against Argentina in San Juan and head coach Dave Rennie laid into his side after their Rugby Championship collapse.