Martin Odegaard joined Real Madrid soon after hitting a double as a 15-year-old in Norway's top league, and now he has struck twice again.

Arsenal went top of the Premier League with a 3-0 win at Bournemouth – and for the first time since 1972 they lead the way concurrently with Manchester United sitting bottom of the pile.

Gunners captain Martin Odegaard scored his first double in a top-flight league game since he was 15 years old and playing in his native Norway, while Arsenal's north London rivals stayed in close touch with the leaders after Harry Kane reached a Premier League goals record in a win over Wolves.

Aston Villa boss Steven Gerrard watched his side slide to a 3-1 defeat at Crystal Palace – a sixth loss in seven games in London for Villa since the start of last season – while Fulham were 3-2 winners in their derby against Brentford. That was a first home victory for the Cottagers in a Premier League London derby since January 2014, ending a 12-game wait.

Elsewhere, Southampton came from behind to take a 2-1 victory at struggling Leicester City, and Everton and Nottingham Forest duked out a 1-1 draw.

185 - @HKane has now netted 185 Premier League goals for Spurs, overtaking Sergio Agüero with Man City (184) for the most goals scored by a player for a single club in the competition. Legendary. pic.twitter.com/IzqGldA3Lu

It was up there with the easiest of finishes, but they all count and Harry Kane's close-range header was his 185th Premier League goal for Tottenham – thereby making him the highest scorer for a single club in the competition's history.

What's more, it was Kane's 250th goal in all games for the club, and Tottenham's 1,000th at home in the Premier League. Only Manchester United, Liverpool, Arsenal and Chelsea had previously totted up 1,000 goals at home since the league's 1992-93 launch.

Even if the performance left room for improvement, Tottenham are unbeaten in their opening three games. The same applied last season when they won three out of three under Nuno Espirito Santo. Five defeats in the next seven cost Nuno his job, and Spurs will hope to avoid any such slide now.

With Antonio Conte in charge, a Spurs collapse seems unlikely. This was head coach Conte's 70th win in the Premier League from 107 games, the bulk of which came across his two seasons at Chelsea. Among managers or head coaches with at least 70 Premier League wins, only Manchester City's Pep Guardiola (74 per cent) has a better win percentage than Conte's 65 per cent.

Bruno Lage's Wolves are without a win in their last 10 league games, spread across this season and last. They have only had one previous double-digit streak of winless Premier League games in their history – a 17-game sequence that spanned a relegation campaign in 2011-12 and the start of the 2018-19 season on their return to the top flight. 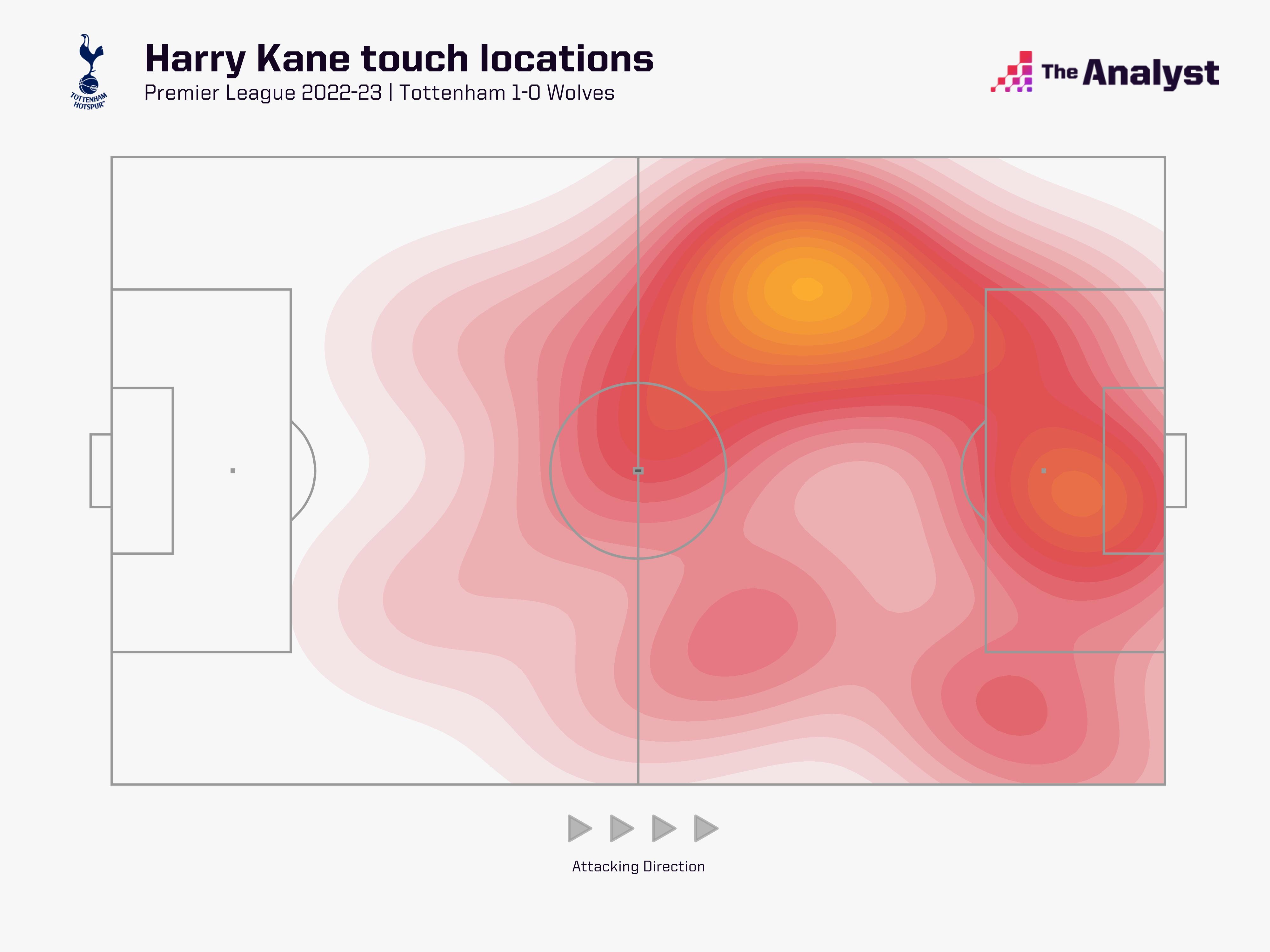 Bournemouth 0-3 Arsenal: From teenage kicks to picking off Cherries, Odegaard doubles up again

Odegaard was already grabbing the attention of Europe's elite clubs when he scored twice for Stromsgodset against Lillestrom in October 2014. Three months later, he would sign for Real Madrid.

Almost eight years down the line, he has finally netted another double in a league game, leading by example and helping Arsenal hit top spot for now.

It was August 22 in 1972 when Arsenal last sat top and great foes Manchester United were propping up the rest in the English top flight, but that is once again the scenario. In this third round of the 2022-23 season's fixtures, United play Liverpool on Monday.

Arsenal have won their opening three league games for the first time since 2004-05, the season that followed their 'Invincibles' campaign. Boss Mikel Arteta has named the same starting XI for their first three games, and that last happened with Arsenal in the famous 2003-04 campaign that saw them complete a league programme undefeated.

William Saliba became the 21st Frenchman to score a Premier League goal for Arsenal – only Newcastle United (also 21) have had as many different French goalscorers – while Bukayo Saka played his 100th Premier League game. At 16 days short of his 21st birthday, it made Saka the youngest player to do so since Raheem Sterling in September 2015. 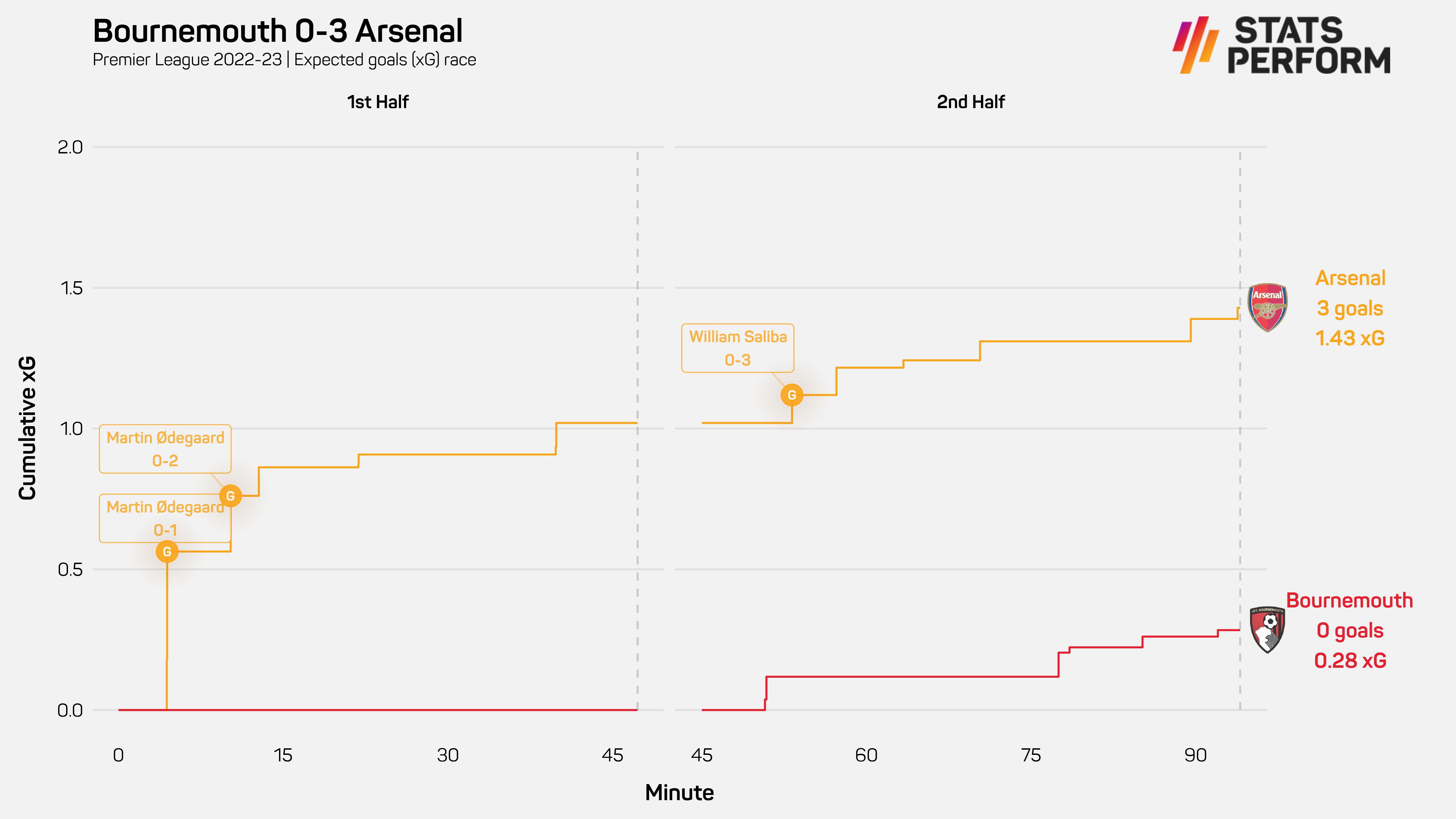 After defeats to Chelsea and Aston Villa, coming from behind to draw against promoted Forest represents some sort of progress for Frank Lampard and Everton.

Yet their one point from three games is the fewest Everton have achieved at this stage of a season since 2010-11 (also one point), and the Toffees have stumbled on an obvious early-season problem against newcomers. They have won none of their last eight matches against promoted clubs in August (D5 L3) so might be glad they have Brentford and Leeds United in their remaining league games this month.

Jordan Pickford became the first Everton goalkeeper to assist a Premier League goal since Joel Robles in December 2016 against Leicester City, with a long kick creating the opening for Demarai Gray to snatch the 88th-minute equaliser. The goal ended a barren run of 21 league games for Gray, who had last netted against Arsenal in December.

Brennan Johnson's opener seven minutes earlier took him to 20 goals since the beginning of last season, the most by any Forest player. He thought it was a winner, but the ending of Gray's drought brought a little cheer for the struggling hosts.

Arsenal created enough chances to beat Manchester United at Old Trafford, according to boss Mikel Arteta, who saw his side lose 3-1.