Chelsea maintained their position at the Premier League summit as they thumped sorry Norwich City 7-0 at Stamford Bridge on Saturday.

Manchester City remain two points behind after cruising past Brighton and Hove Albion 4-1 at the Amex Stadium.

Watford produced a stunning comeback to thump Everton at Goodison Park, while Leeds United left it late to snatch a point against Wolves.

Using Opta data, Stats Perform takes a look at the pick of the fixtures from the day.

Phil Foden was at the heart of City's big win at the Amex Stadium as Pep Guardiola's side sealed an eighth win in nine Premier League games against the Seagulls.

Ilkay Gundogan put the visitors ahead before Foden scored just his second brace in the Premier League, previously doing so against Burnley in June 2020.

Alexis Mac Allister pulled one back for Graham Potter's side to became the first player to score a Premier League penalty as a substitute for Brighton.

Riyad Mahrez added gloss to the scoreline in stoppage time, though, after being teed up by Foden. The Algerian has scored more goals in all competitions (16) than any other City player so far in 2021.

The result meant Brighton conceded four goals for the first time in 43 Premier League games, since a 4-2 loss against Everton in October 2020. Indeed, the Seagulls conceded as many goals as they had in their previous seven league games combined.

3 - Phil Foden has been directly involved in three goals (two goals, one assist) in a single @PremierLeague game for @ManCity for the very first time. Produce. pic.twitter.com/8gz87Ydul5

Chelsea made light work of Romelu Lukaku and Timo Werner's absences, winning a Premier League game by seven or more goals for the fourth time and the first time since an 8-0 win over Aston Villa in December 2012.

Mason Mount was the star man, the England international becoming the 20th different player to score a Premier League hat-trick for Chelsea. Only Arsenal (21) have had more hat-trick scorers in the competition.

Ben Chilwell was on the scoresheet as well, the former Leicester City left-back becoming the first Englishman to score in four consecutive Premier League appearances for Chelsea since Frank Lampard in February 2013.

The defeat was Norwich's joint-heaviest in Premier League history, the Canaries also losing 7-0 to Manchester City in November 2013.

Their haul of just two goals after nine league games this season is the joint-lowest tally ever at this stage of an English league campaign, and just the third time a team has registered such a low return at this stage in the Premier League (Crystal Palace in 2017-18 and Everton in 2005-06). 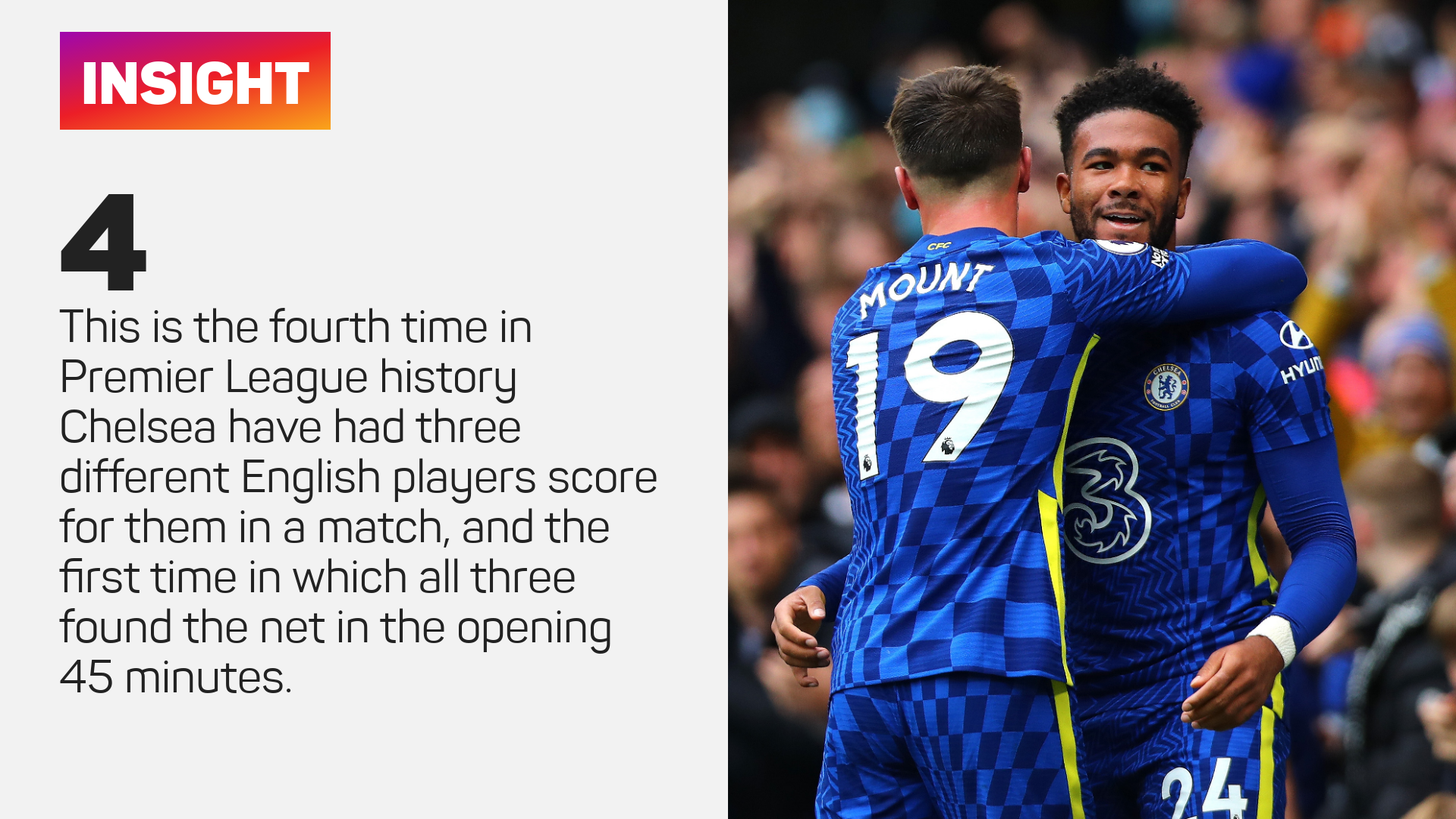 Watford scored four times in the final 12 minutes to complete a remarkable fightback at Goodison Park.

They were indebted to a superb hat-trick from former Toffees striker Josh King, who became just the third player to score a Premier League hat-trick against a side he has previously played for in the competition, after Andy Cole (for Manchester United vs Newcastle) and Marcus Bent (for Wigan vs Blackburn).

The result also marked the first time the Hornets had come from behind to win an away Premier League game since January 2019 vs Crystal Palace, having lost each of their previous 21 such matches in the competition.

Despite earning a late point thanks to Rodrigo's stoppage-time penalty, seven points from nine games marks Leeds' worst start to a top-flight campaign since 1981-82 (six points), a season in which they were relegated to the second tier.

Wolves had looked destined for all three points thanks to another goal from Hwang Hee-chan. The South Korean has scored four goals from just four shots on target in the Premier League this season, the best such 100 per cent conversion rate in the competition so far this term.

Rodrigo stepped up late on to salvage a point, though. His equaliser from the spot was just Leeds' third penalty goal scored in the final minute of a Premier League match, after Gary McAllister against Coventry City (October 1995) and Ian Harte against Derby County (December 1999).

Chelsea are set to be without some key figures for the visit of Manchester United in Sunday's Premier League clash.

Guardiola took Sterling 'back to basics' to rediscover his form

Raheem Sterling has scored three goals in as many games for Manchester City and Pep Guardiola says there is more to come.

Carrick retains focus on Chelsea amid talk of Rangnick arrival

Ralf Rangnick is said to be set to take over on an interim basis at Old Trafford, but that speculation is of no interest to Michael Carrick.

Ralf Rangnick appears set to be named Manchester United head coach and Thomas Tuchel has praised one of his largest influences in coaching.

Reece James takes inspired form for Chelsea into Sunday's clash with Manchester United - could more goals and assists be on the way?

With the Ballon d'Or ceremony coming up on Monday, Stats Perform assesses how the favourites stack up against each other.

Liverpool 4-0 Southampton: Jota at the double as rampant Reds sweep Saints aside

Liverpool cruised to a commanding 4-0 win over Southampton at Anfield with goals from Diogo Jota, Thiago Alcantara and Virgil van Dijk.

Real Madrid boss Carlo Ancelotti insisted any future signings such as Kylian Mbappe will have no impact on Vinicius Junior's playing time.