Premier League leaders Manchester City collected a routine victory over Brentford to further their advantage at the top.

That victory saw Pep Guardiola's side extend their lead at the summit to 12 points, with second-placed Liverpool due to host Leicester City on Thursday.

Tottenham fell to a late defeat against Southampton as Antonio Conte suffered his first home league loss as Spurs boss, while Aston Villa shared the spoils in a six-goal thriller with Leeds United.

And strugglers Norwich City picked up a valuable draw at home to Crystal Palace, with Dean Smith's side now a point behind 17th-placed Newcastle United as the relegation battle continues.

Here, Stats Perform unpacks the pick of the Opta data from the day's top-flight action.

3-3 on goals, 1.9-1.9 on xG.
An absolute classic Premier League match & the second PL game this season to see five first half goals.

The other? Burnley vs Palace. Ended 3-3 as well. Textbook. pic.twitter.com/bH2E0xxjRD

Strikes either side of the interval from Kevin De Bruyne and Riyad Mahrez helped City to a 2-0 win over Brentford as the Citizens completed the league double over the Bees for the first time since 1936-37.

Mahrez opened the scoring as he netted in his seventh consecutive game across all competitions for City – only Lionel Messi (twice) and Sergio Aguero have previously achieved that feat under Pep Guardiola.

De Bruyne doubled the hosts' lead in the second half, the midfielder recording his 85th goal involvement (35G 50A) in his 96th top-flight appearance at the Etihad Stadium, where he has found the net five times in his last four games.

Brentford rarely troubled Ederson's goal and were caught offside 10 times in the match, the most by a Premier League team since January 2018 as City recorded their 100th clean sheet under Guardiola in the competition. 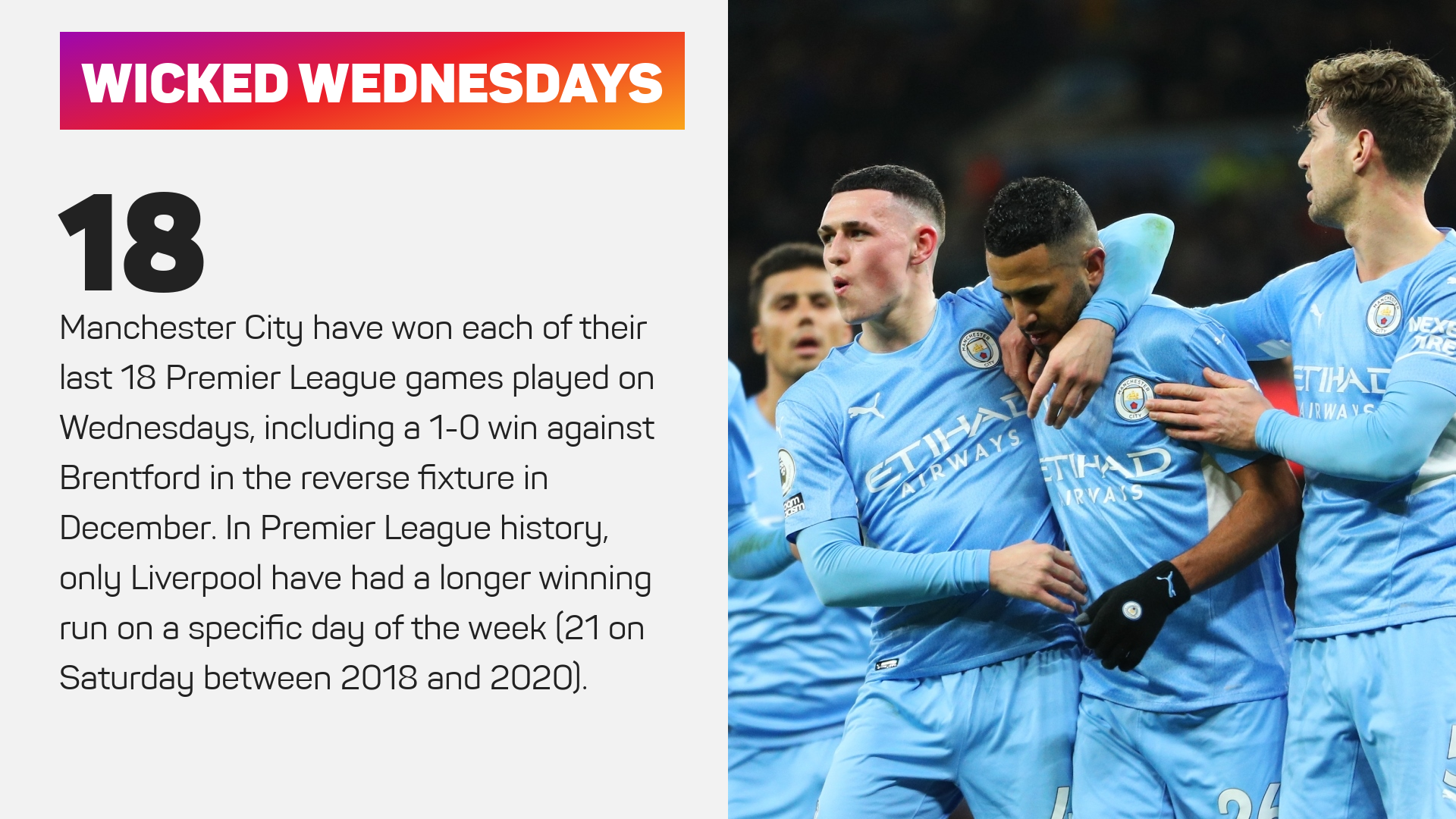 Southampton twice rallied from behind to earn a late 3-2 victory at Tottenham to end Conte's unbeaten start at home in the league as Spurs boss.

Jan Bednarek poked into his own net to give Spurs the lead, the centre-back now on a Premier League-high three own goals since the start of 2019-20. Similarly, Tottenham have benefited from the most own goals in the competition this season (three).

But Armando Broja soon levelled up. That was the Albania striker's sixth top-flight goal this term – only Kevin Davies (nine in 1997-98) managed more in the Premier League for Southampton while aged 20 or under.

Son Heung-min restored his side's advantage with his 12th strike against Southampton across all competitions, five more than he has registered against any other team for Spurs.

Saints fought back again, Mohamed Elyounoussi equalising before Che Adams sealed victory. Both finishes were set up by James Ward-Prowse, who assisted two goals in a single Premier League match for only the second time in 290 appearances.

Having equalised in the 79th minute, Southampton's victory was the latest they had been behind in a Premier League match that they would go on to win since March 2016 against Liverpool (equalised in 83rd minute). 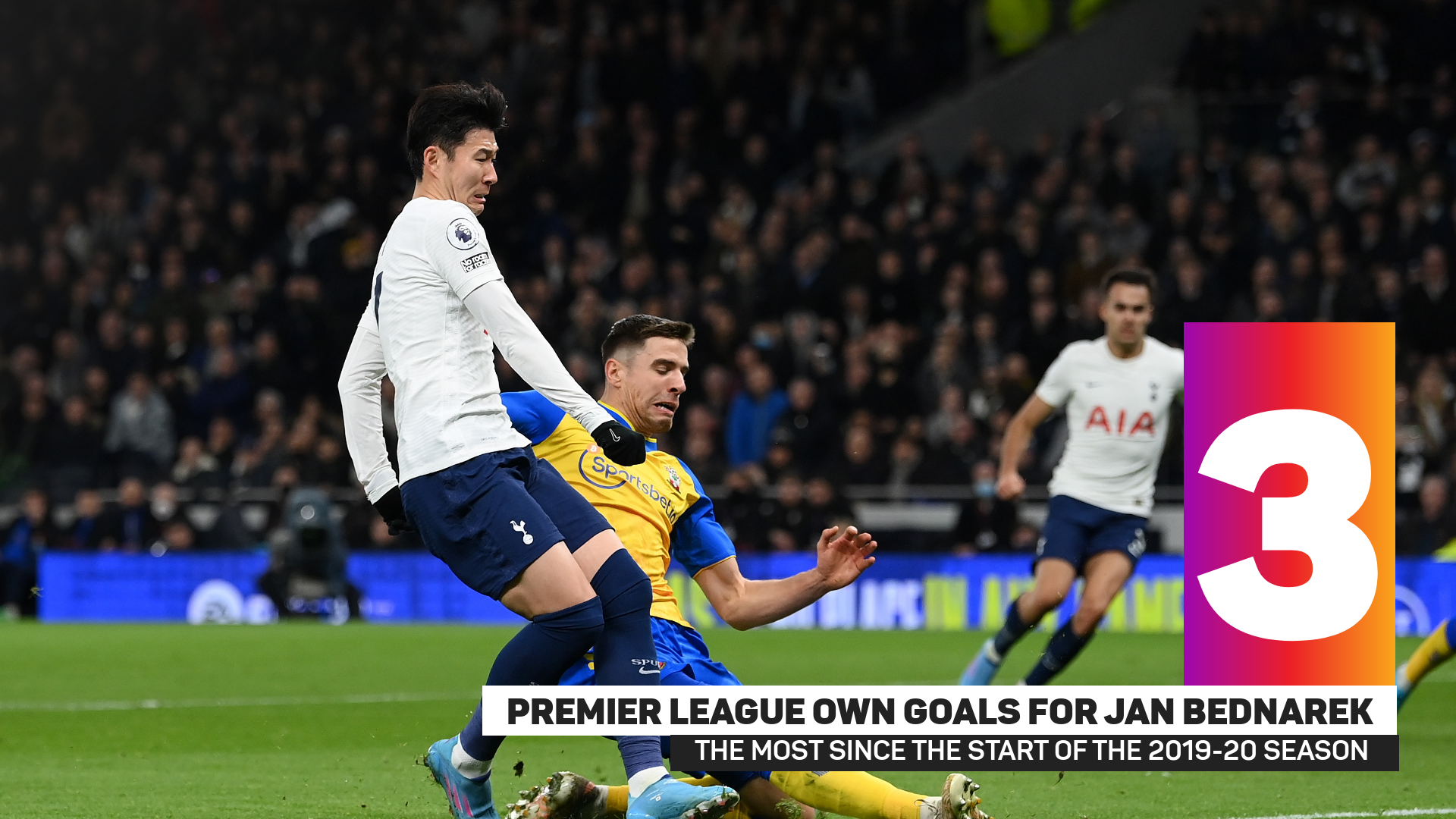 Aston Villa, who had Ezri Konsa dismissed late on, shared the points with Leeds in a 3-3 thriller as Dan James, Jacob Ramsey and Philippe Coutinho dominated proceedings.

James scored his third and fourth Premier League goals this term, his best-ever tally in a season, though Marcelo Bielsa found his side 3-2 down at half-time.

Coutinho initially cancelled out James' opener as he became the sixth Villa player to score in each of his first two Premier League appearances at Villa Park, and the first since Carlton Cole in August 2004.

The Brazil international then teed up a Ramsey double as the midfielder became the youngest player to score more than one goal in a Premier League game for Villa (20y 257d) since Luka Moore got a hat-trick in February 2006 (19y 356d).

Diego Llorente restored parity in the second half as Leeds recorded three goals in consecutive Premier League away games for just the second time, and for the first time since March 1995, to earn a valuable point. 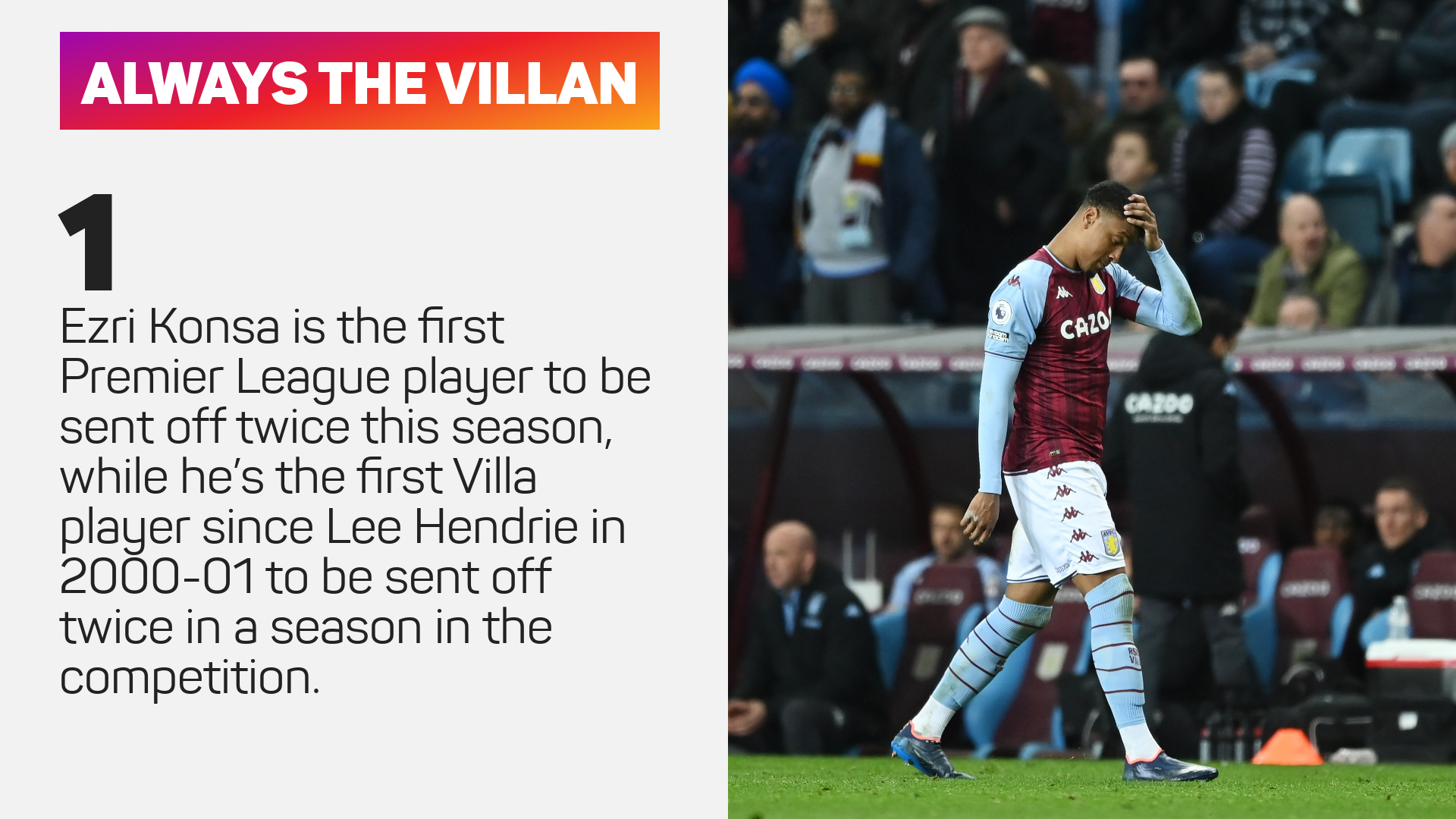 Norwich City raced out the blocks at Carrow Road but ultimately had to settle for a point after a 1-1 draw with Crystal Palace.

Teemu Pukki – who has scored 43 per cent of Norwich's top-flight this season (6/14), the highest such share of any player in the competition – netted the fastest goal in the Premier League this season as he finished after just 38 seconds.

Wilfried Zaha pegged Smith's team back with his 80th goal involvement in England's top division (53G 27A), 79 of which have been for the Eagles.

Michael Olise teed up the Ivory Coast international's second-half equaliser, his seventh goal involvement (3G 4A) across all competitions in 2022 – the most by any Premier League player.

Palace should have secured all three points but Zaha failed from the penalty spot for the first time, on his fifth attempt, meaning the Eagles have won just one of their last 13 away games in the league.

New Tottenham forward Richarlison banned for one game by FA

After his actions during May's win over Chelsea while playing for Everton, Richarlison will start his Tottenham career with a one-game ban.

Arsenal completed the signing of Gabriel Jesus on a long-term deal on Monday and the Brazil international is excited to get going.

Arsenal have made their fourth signing this transfer window after adding Brazil striker Gabriel Jesus to their ranks.