Liverpool had to work hard for a draw at Fulham, while there were opening day wins for Tottenham, Bournemouth, Newcastle, Leeds and Chelsea.

The Premier League kicked off on Friday as Arsenal beat Crystal Palace at Selhurst Park, but the first Saturday of the season always feels like the real curtain raiser.

An unusually early August Saturday saw some surprise results, with Liverpool forced to come from behind twice to rescue a draw at Fulham, while another promoted team secured all three points as Bournemouth beat Aston Villa 2-0 at the Vitality Stadium.

The third new arrival in the top flight, Nottingham Forest, were beaten 2-0 at Newcastle United, while Tottenham had to respond to an early setback before eventually running out 4-1 winners against Southampton.

Leeds United also recovered to snatch a 2-1 victory over Wolves despite going 1-0 down inside six minutes, and the late kick-off saw Chelsea edge a 1-0 win at Everton to ruin Blues legend Frank Lampard's opening day.

Here, Stats Perform uses Opta stats to bring you some of the more interesting numbers from the day's action.

@ChelseaFC have won their opening match of a #PL season for the 20th time - no club have won more #EVECHE pic.twitter.com/zHHFaw46sk

It can go either way when you are scheduled to face a promoted team. You either get nervous opponents, or confident ones.

Liverpool got the latter on Saturday as an excellent Fulham performance could easily have led to Marco Silva's men beating last year's Premier League and Champions League runners-up.

Two goals from Aleksandar Mitrovic gave the Cottagers hope of an upset, though substitute Darwin Nunez equalised the first on his debut, before Mohamed Salah cancelled out the Serbian's second, a cool penalty.

Mitrovic became the first player to score two goals for a promoted side on the opening day of a Premier League season since Steve Mounie for Huddersfield Town against Crystal Palace in August 2017.

Salah usually finds the net on the opening day and now has eight goals on matchday one of an English campaign, the joint-most with Alan Shearer, Lampard and Wayne Rooney.

Nunez and Salah provided assists for one another in a promising start to their life together in Jurgen Klopp's forward line, and the Uruguayan became just the third player in Premier League history to both score and assist off the bench on his debut after Sergio Aguero (Man City v Swansea, August 2011) and Alvaro Morata (Chelsea v Burnley, August 2017).

3 - Darwin Núñez is only the third player to score and assist from the bench on his Premier League debut after Sergio Agüero (2011-12) and Álvaro Morata (2017-18). Bulldozer. pic.twitter.com/PFFnCw7b61

In the battle of former England midfielders in the dugout on the south coast, it was Scott Parker who came out on top against Steven Gerrard.

Jefferson Lerma was the surprise scorer of an early opener, with his goal after one minute and 56 seconds the earliest scored on the opening day by a promoted team in Premier League history.

Kieffer Moore rose to head in the second late on to seal the win, and the Wales international has now scored in each of his past four league games for Bournemouth (five goals in total), as many as he managed in his previous 25 (one appearance for Bournemouth, 24 for previous club Cardiff City).

It was a far from ideal start to the campaign for Gerrard's Villa, who have now lost three of their four opening-day Premier League matches since returning to the top-flight in 2019 (W1), having won three in a row between 2013-14 and 2015-16.

After ending last season poorly, Villa have won just two of their past 12 Premier League games (D3 L7), despite winning three in a row prior to that. 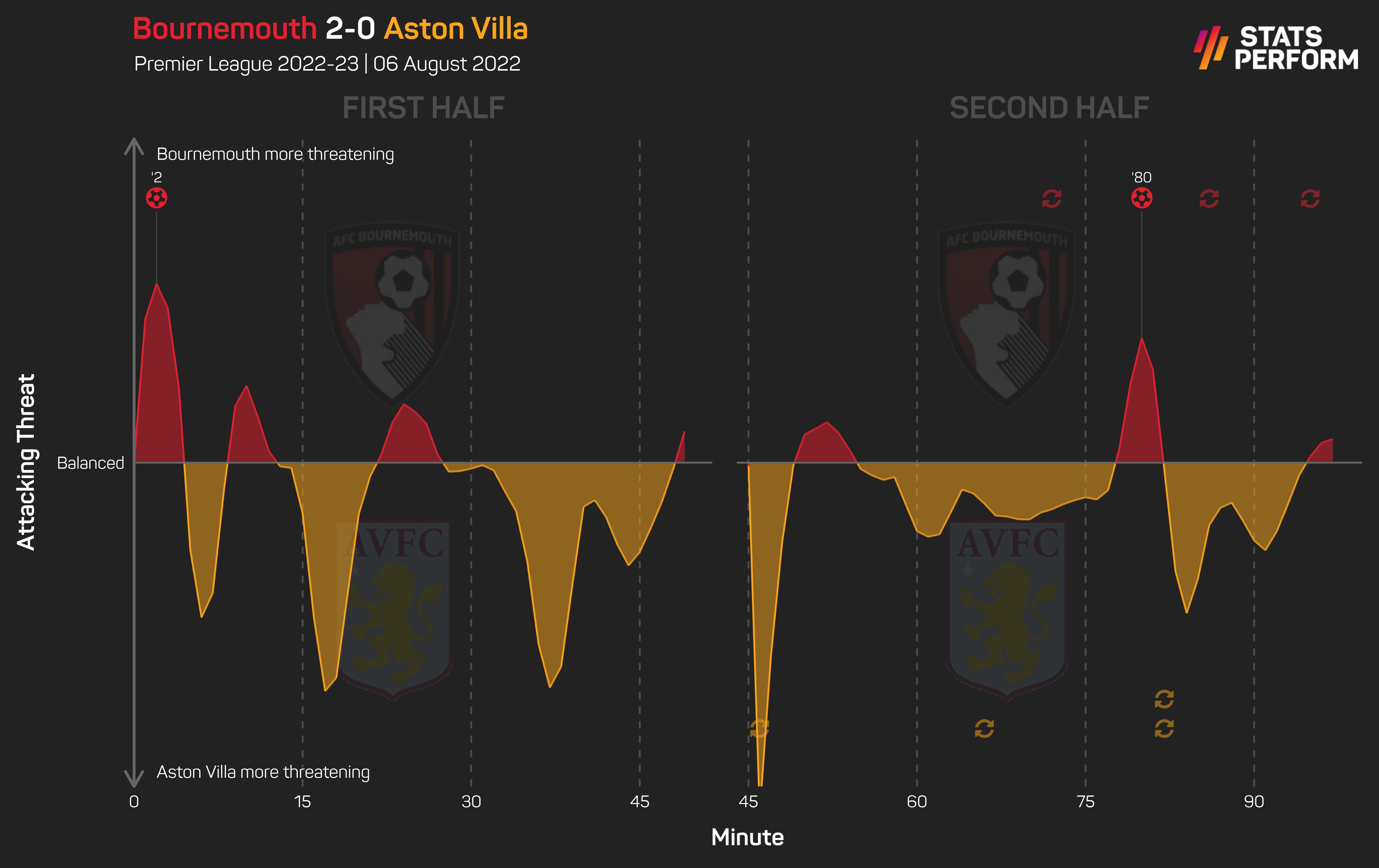 Tottenham 4-1 Southampton: Kulusevski dazzles as Conte's side come back in style

With Antonio Conte in charge and some interesting signings through the door, it is difficult to recall a season where there has been more optimism at Spurs.

That may have been dampened briefly when James Ward-Prowse volleyed Southampton in front, but it did not take long for the hosts to fire back, with goals from Ryan Sessegnon, Eric Dier, a Mohammed Salisu own goal and the impressive Dejan Kulusevski sealing a big opening-day win.

It was Spurs' biggest win on matchday one of a league season since August 1986, when they beat Aston Villa 3-0.

Kulusevski both scored and assisted in a Premier League game for the third time since signing for the north London club in January, with the Swede having been directly involved in 15 goals (six goals, nine assists) in his past 17 league matches.

It was a landmark day for Sessegnon, who scored his first Premier League goal for Spurs (22nd appearance), 1,319 days after his last goal in the competition, which came for Fulham against Wolves in December 2018.

For the Saints, they have lost all four of their opening games of a Premier League season under Ralph Hasenhuttl – the worst 100 per cent losing record for a manager in the competition. 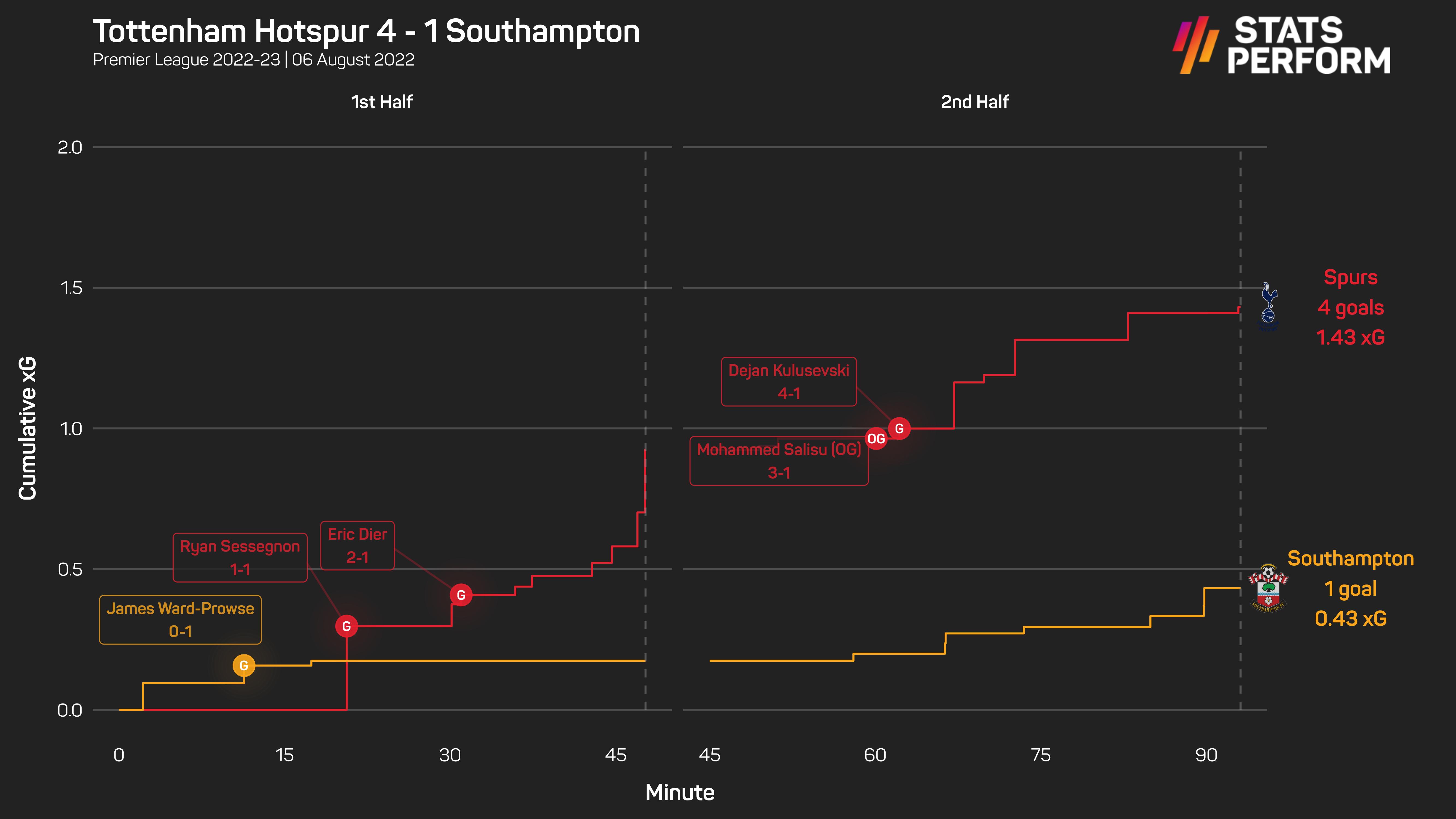 'The Narrative' will always be a threat whenever Lampard comes up against Chelsea, where he made such a name for himself as a player.

But a tight game at Goodison Park was ultimately settled in the visitors' favour by a penalty at the end of the first half, when Ben Chilwell was fouled in the box by Abdoulaye Doucoure, and Jorginho calmly slotted his spot-kick into the corner of the net.

Both teams went into the game with impressive opening-day records, and Chelsea have now won their first match of a Premier League season for the 20th time, with no side winning more such games in the competition (Manchester United also 20).

Everton came into the match with the longest unbeaten run on matchday one, having previously not lost since a 1-0 defeat to Queens Park Rangers in 2011.

Jorginho's effort was the 139th penalty scored in Premier League history for Chelsea, now the outright most of any team (above Liverpool on 138).

Chelsea goalkeeper Edouard Mendy more than played his part in keeping Everton out, and he has now kept a clean sheet in 47 per cent of his Premier League starts (31/66) – only Manchester City's Ederson (50 per cent) has a higher clean sheet ratio among goalkeepers to have started at least 50 games. 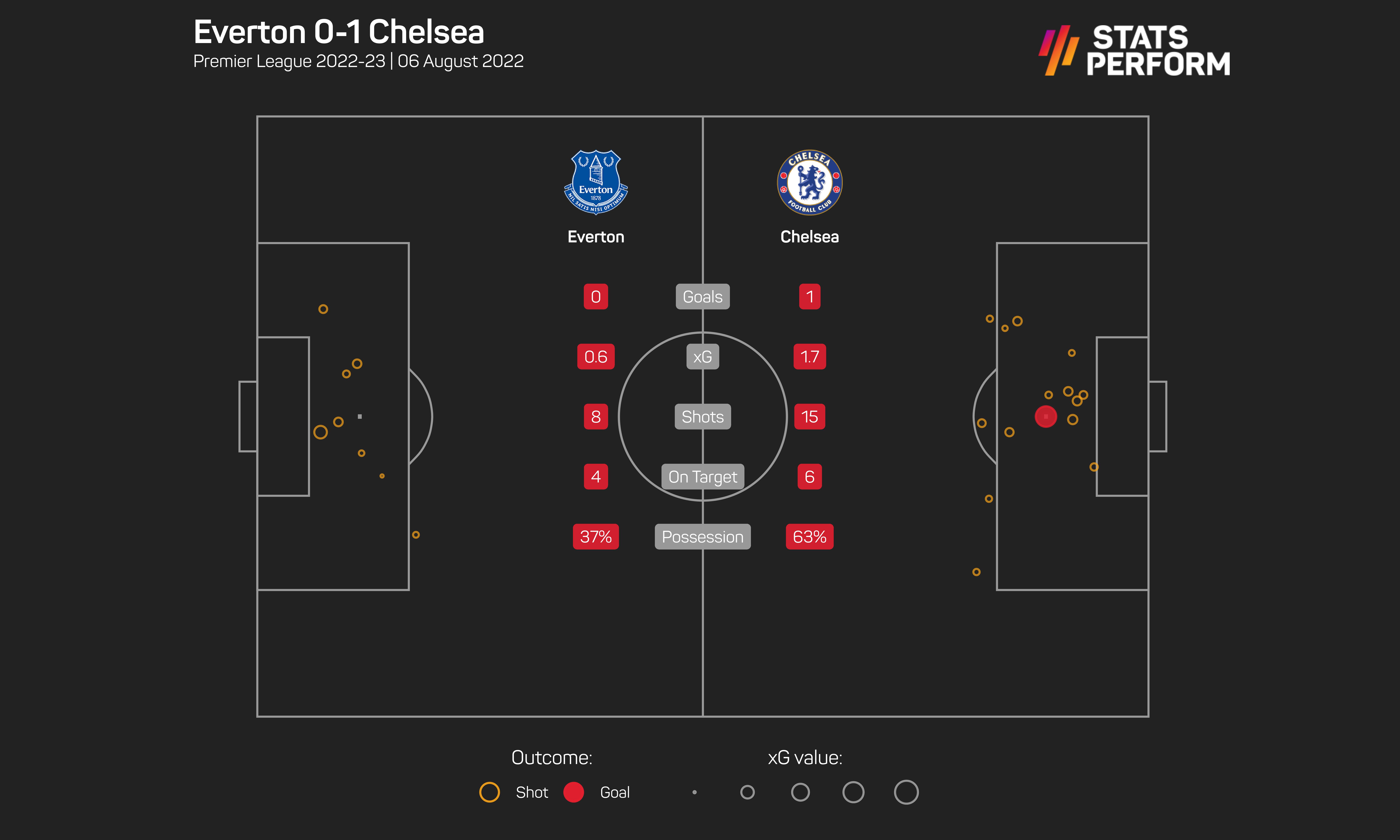 The Stamford Bridge outfit have moved to bring one promising youngster on board, as they size up a fresh offer for another.

Luis Suarez has given fellow Uruguayan Darwin Nunez advice on how to deal with English football after the latter was sent off on Monday.