Manchester City and Liverpool are set for another title tussle, as Stats Perform AI predicts the 2022-23 Premier League season.

The Premier League is back, with another fascinating season in store.

The 2021-22 title race went right to the wire, with Manchester City pipping Liverpool at the last, while the picture at the bottom was similarly dramatic as Leeds United survived.

The dominant top two have strengthened – including City pinching Leeds talisman Kalvin Phillips – and the league again looks so tough to call at both ends of the table.

Thankfully, Stats Perform AI is able to do that. It has predicted the outcome of the coming campaign, estimating the likelihood of teams finishing in each position informed by their expected results in each match.

These are calculated using betting odds and Stats Perform's team rankings – based on historical and recent team performances – and it has thrown up some interesting results, with some surprises at the summit.

There was only a point between champions City and runners-up Liverpool last season, and Stats Perform AI expects the coming campaign to be similarly close.

But the Reds are the favourites for the title, with a 49.72 per cent chance of being crowned champions to City's 47.03 per cent.

Such is the gulf between the top two and the rest that Tottenham, backed as their nearest challengers, have only a 1.81 per shot at ending their 62-year wait under former Premier League winner Antonio Conte.

Chelsea, the club with whom Conte claimed the title, are given a 1.1 per cent hope.

Only seven teams are given any chance at all of celebrating come May – the fewest across all of Europe's top five leagues – with Manchester United (0.18 per cent) and Arsenal (0.13 per cent) joined by a resurgent Newcastle United (0.03 per cent).

Last champions in 1927, Newcastle are closing on a century-long drought, so even with their big spending, a one in 3,000 shot sounds about right. 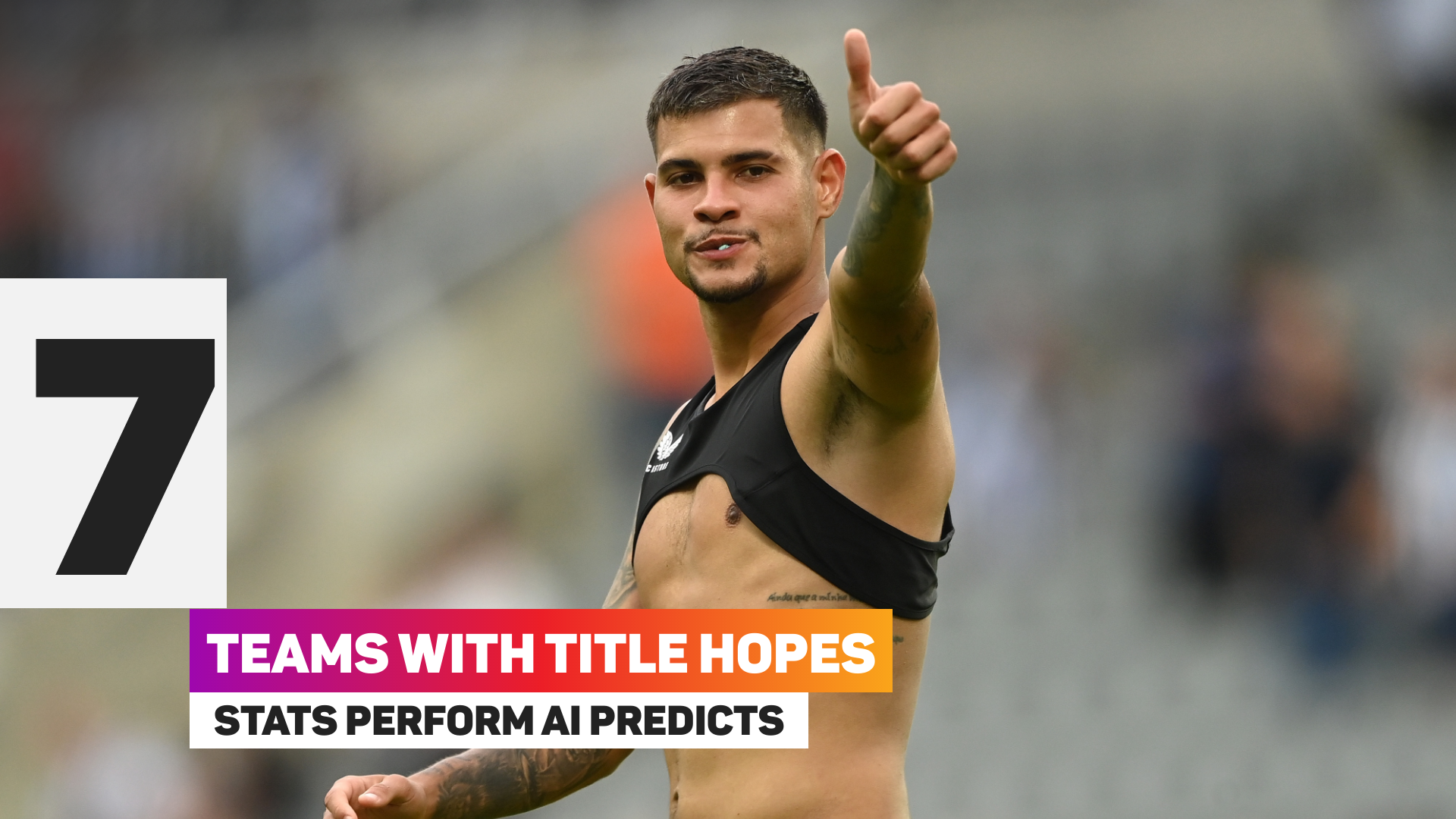 Stats Perform AI does not only fancy Spurs and Chelsea as the top two's nearest contenders but also as their fellow Champions League qualifiers.

However, despite West Ham being given no hope of a title tilt and longer odds of Champions League qualification, they are ranked to repeat their seventh-placed finish ahead of Newcastle.

Every team in the division at least has the opportunity to dream of a top-four finish, even if Bournemouth (0.07 per cent) might instead be better off preparing for the reality of a relegation scrap. 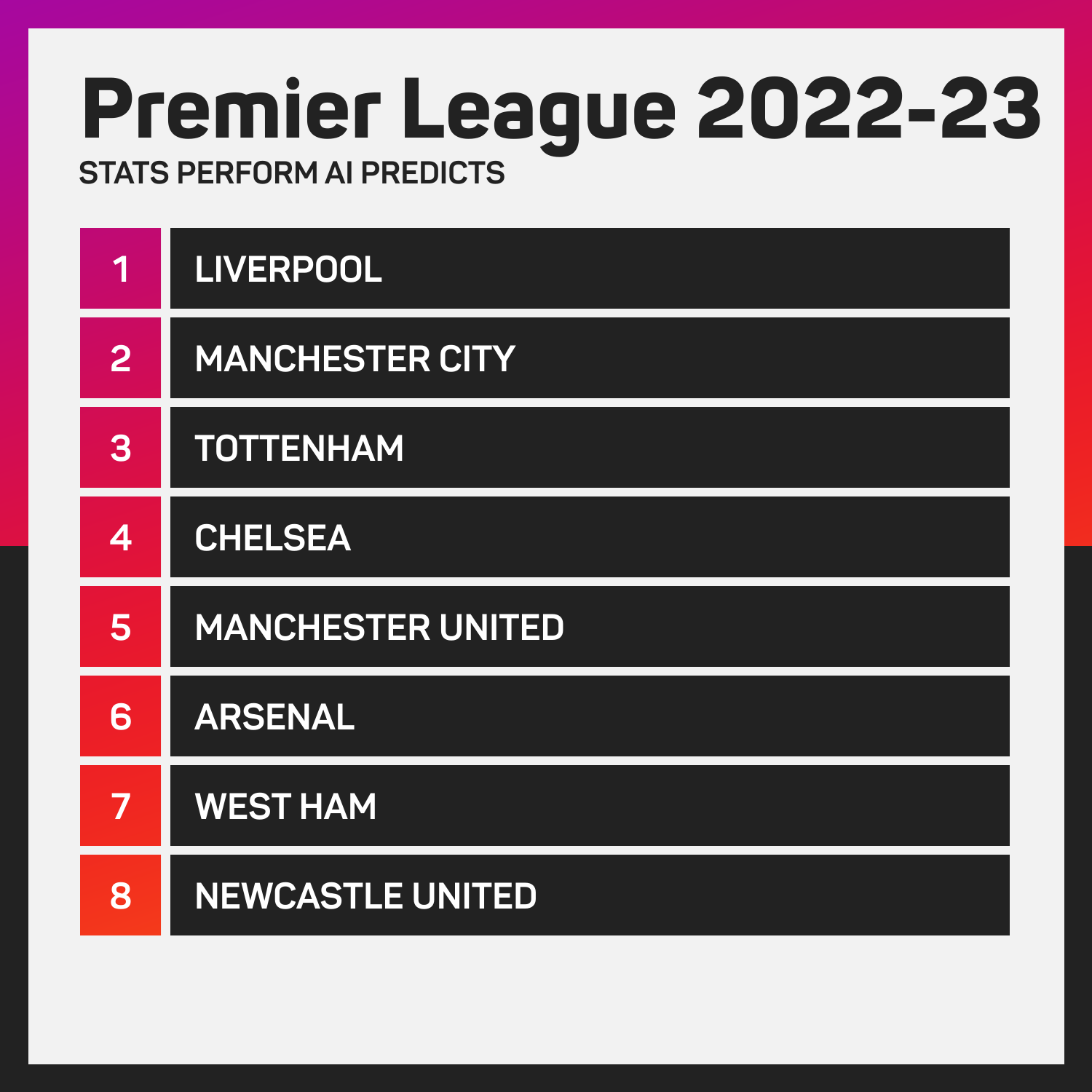 Bournemouth are not the only promoted team set to find life tough. In fact, Stats Perform AI predicts all three will go straight back down.

This has only happened once previously in Premier League history – in 1997-98 – but the prediction model considers the trio clear favourites to be relegated.

Bournemouth (45.03 per cent) have scarcely improved their squad, while Nottingham Forest have done the opposite and invested heavily (44.47 per cent); neither approach is expected to succeed, nor are Fulham (43.83 per cent), promoted as champions.

Everton (15.06 per cent), like Brentford and Leeds, have lost key players, but the data is backing the Toffees to improve on last year's dismal campaign.

Despite interest from Manchester United, Bologna continue to insist Marko Arnautovic is not for sale.

Dries Mertens and Lucas Torreira have both completed their transfers to Super Lig giants Galatasaray.

Azpilicueta felt 'responsibility to stay' at Chelsea 'home' after sanctions

With a new contract in the bank, Cesar Azpilicueta has revealed why he decided to stay with Chelsea over a move back to Barcelona and Spain.

Brighton and Hove Albion ruined Erik ten Hag's start to life at Manchester United by securing their first ever win at Old Trafford.

Stopping shy of confirming Manchester United's interest, Marko Arnautovic's agent and brother has revealed a bid from a "well-known club".

The new Premier League season is only 10 games old, but let's give into the temptation to draw early conclusions...