Arsenal and Manchester United meet on Sunday, and two playmakers are likely to be crucial for the old rivals.

Arsenal and Manchester United lock horns at Emirates Stadium on Sunday in perhaps the biggest clash between the two sides since the title-tussling encounters of the mid-2000s.

The two Premier League greats are a shadow of their former selves; the Gunners have not won the title since 2004 while United last lifted the Premier League in Alex Ferguson's final season in charge, 10 years ago.

Yet the 2022-23 season has seen the old rivals show signs of vast improvement.

Arsenal's patience in Mikel Arteta is paying off. A return to the Champions League might have been the target heading into the campaign, but the Gunners find themselves in pole position in the title race.

Similarly, Erik ten Hag has steadied the ship at Old Trafford, following a difficult start at the club, to give United a shot at becoming involved in the title equation.

Those hopes were dented slightly by a 1-1 draw at Crystal Palace on Wednesday, though claiming a second win of the season over the Gunners, whose only league loss of the campaign came at Old Trafford back in September, would greatly enhance their status as contenders.

Crucial to the form of both teams have been two playmakers; classic number 10s in terms of their technical ability and distribution, but the pair also possess the keys to success in the modern game – aggression and work rate. 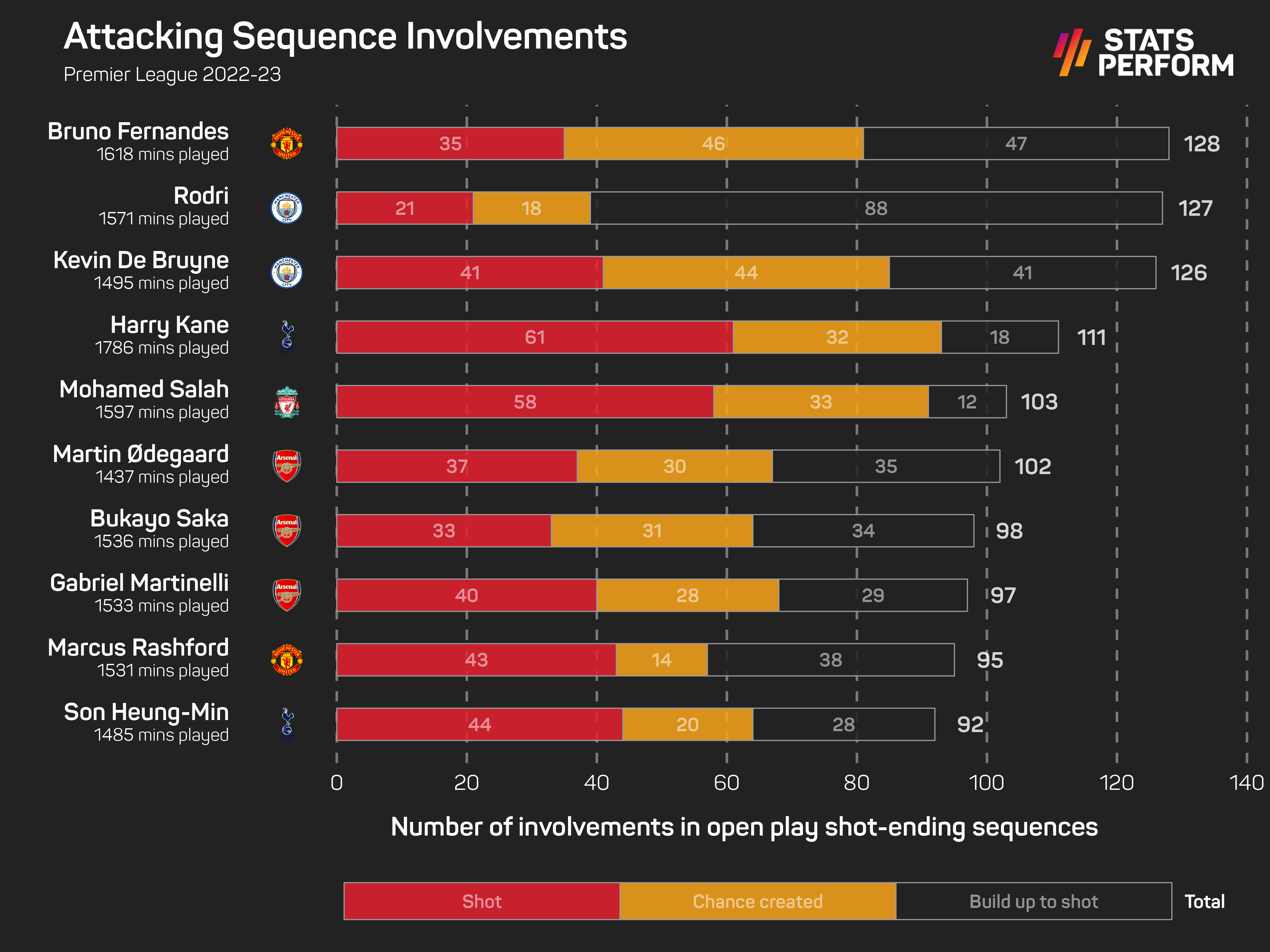 Martin Odegaard, Arsenal's captain, has excelled since he was handed the armband by Arteta ahead of the campaign. The Norway international, signed by Real Madrid back when he was 16, has gone from strength to strength, and clinched the Premier League Player of the Month award for November/December.

United, meanwhile, have Bruno Fernandes back at his best and, though his displays have gone under the radar in comparison to Odegaard, the Portugal midfielder stands as one of the Premier League's finest performers this term.

Two sides of the same coin

Odegaard's numbers in front of goal this season have been the driving force behind conversations that there may well be another Norwegian in the running for player of the year alongside Erling Haaland.

The 24-year-old has scored eight times and set up his team-mates on five occasions. His tally of direct goal contributions (13) is bettered by only three Premier League players.

While Fernandes is behind his rival in that regard, the Portugal international shares plenty of similarities this season with Odegaard – particularly when creating chances for team-mates.

The pair also rank among the top six players in the Premier League for attacking sequence involvements from open play, Fernandes standing top of the pile with 128 while Odegaard comes sixth with 102.

That puts Odegaard narrowly ahead of team-mates Bukayo Saka (98) and Gabriel Martinelli (97), evidence the Gunners are sharing the attacking burden more widely.

United are seemingly more reliant on Fernandes' involvement – his 49 chances created is 24 more than any of his club-mates. 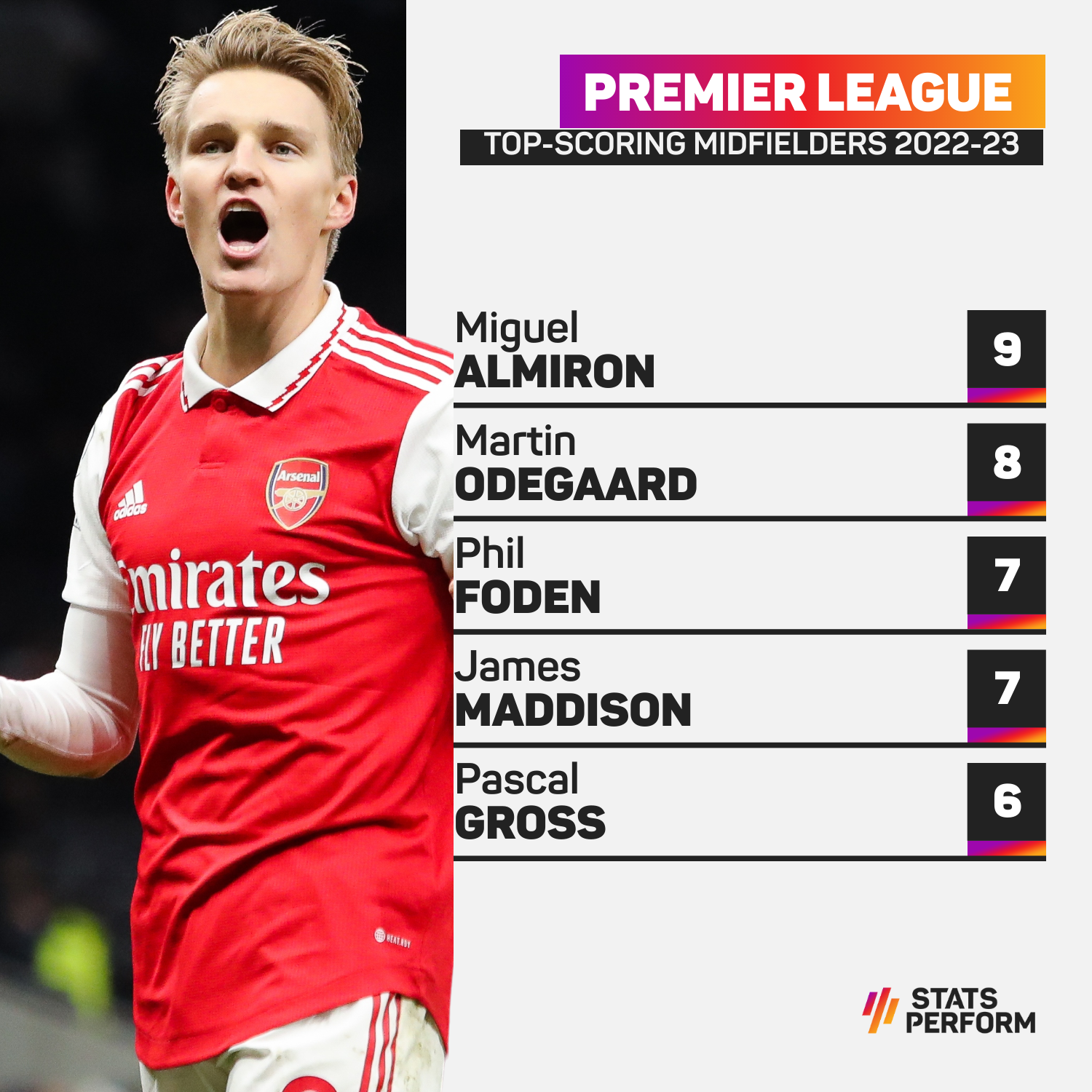 Arsenal have hardly lacked a creative midfielder down the years. They boasted Mesut Ozil, another former Madrid player, previously, but fan frustration towards the World Cup winner eventually grew to a perceived reluctance to shoot and instead look for an extra pass to create a goal, while the German's languid playing style also drew criticism.

Prior to this campaign, Odegaard was perceived as also attempting to play an extra pass where the option to shoot was on. This term, though, he has taken a more direct approach, and he is Arsenal's leading goalscorer in the top flight.

Odegaard also has the best shot conversion rate of the quartet (19.05 per cent) and averages a goal every 179 minutes in the Premier League, again higher than the others in Arsenal's first-choice attack.

His willingness to shoot is made clear when compared to his fellow Premier League midfielders, with only Bryan Mbeumo (29), Kevin De Bruyne (30), Harvey Barnes (31) and Kai Havertz (31), who is often utilised as a forward at Chelsea, trying their luck on more occasions – though none of those four have a better minutes-to-goal ratio than the Arsenal man. 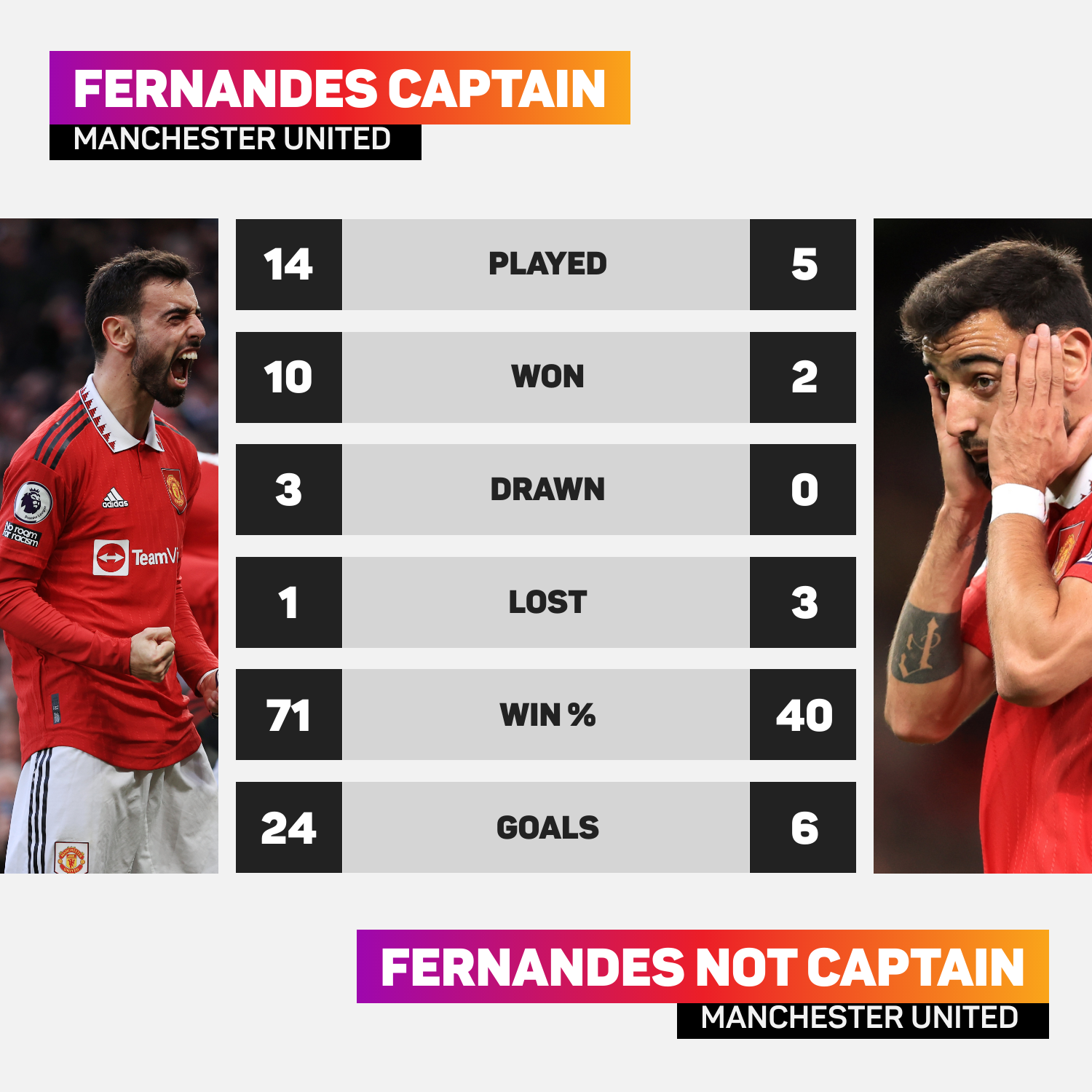 In contrast to Odegaard, Fernandes has not taken on the role of club captain on a full-time basis but has been called upon regularly by Ten Hag this season, with Harry Maguire out of favour.

Fernandes has captained United in 14 of their 19 league games, with Maguire and the now departed Cristiano Ronaldo taking the armband for the other five matches, and United perform far better when the former Sporting CP midfielder is in the role.

United have won 71 per cent of their matches with Fernandes as captain (10 of 14), losing just once, compared to a 40 per cent win percentage without him wearing the armband – winning two and losing three of those five games.

With Fernandes as captain, United have scored more goals per game and conceded less per game than with Maguire or Ronaldo in the role. Perhaps the Portugal international's influence on the team stems further than just his numbers in the final third.

Now Ronaldo is out of the picture, Fernandes' opportunities with the armband should increase, particularly if Maguire fails to win back favour, and that will serve as a positive for United's push to enter the title picture.

Come Sunday, whoever can come out on top in the battle between the two number eights might just win the game.