Argentina face France in the World Cup final, which could boil down to who comes out on top in a meeting of two of the sport's best players.

Lionel Messi and Kylian Mbappe have dominated the 2022 World Cup.

Both have been the driving forces behind Argentina and France's respective runs to the final.

And the Paris Saint-Germain team-mates are not just vying for glory for their nations in Sunday's showdown at Lusail Stadium.

The Golden Ball award – for the best outfield player at the tournament – as well as the Golden Boot, are up for grabs.

But what do the Opta numbers say ahead of the mouth-watering clash?

The pair have both appeared in all six of their side's games in Qatar. However, while Mbappe came on from the bench in France's surprise loss to Tunisia at the end of the group stage, Messi has played every minute for Argentina, which is quite extraordinary given his age.

Naturally, it's Messi – set to become the all-time leading appearance-maker in World Cup history when he takes to the field on Sunday – who comes out on top for minutes played, with 570 to Mbappe's 477. 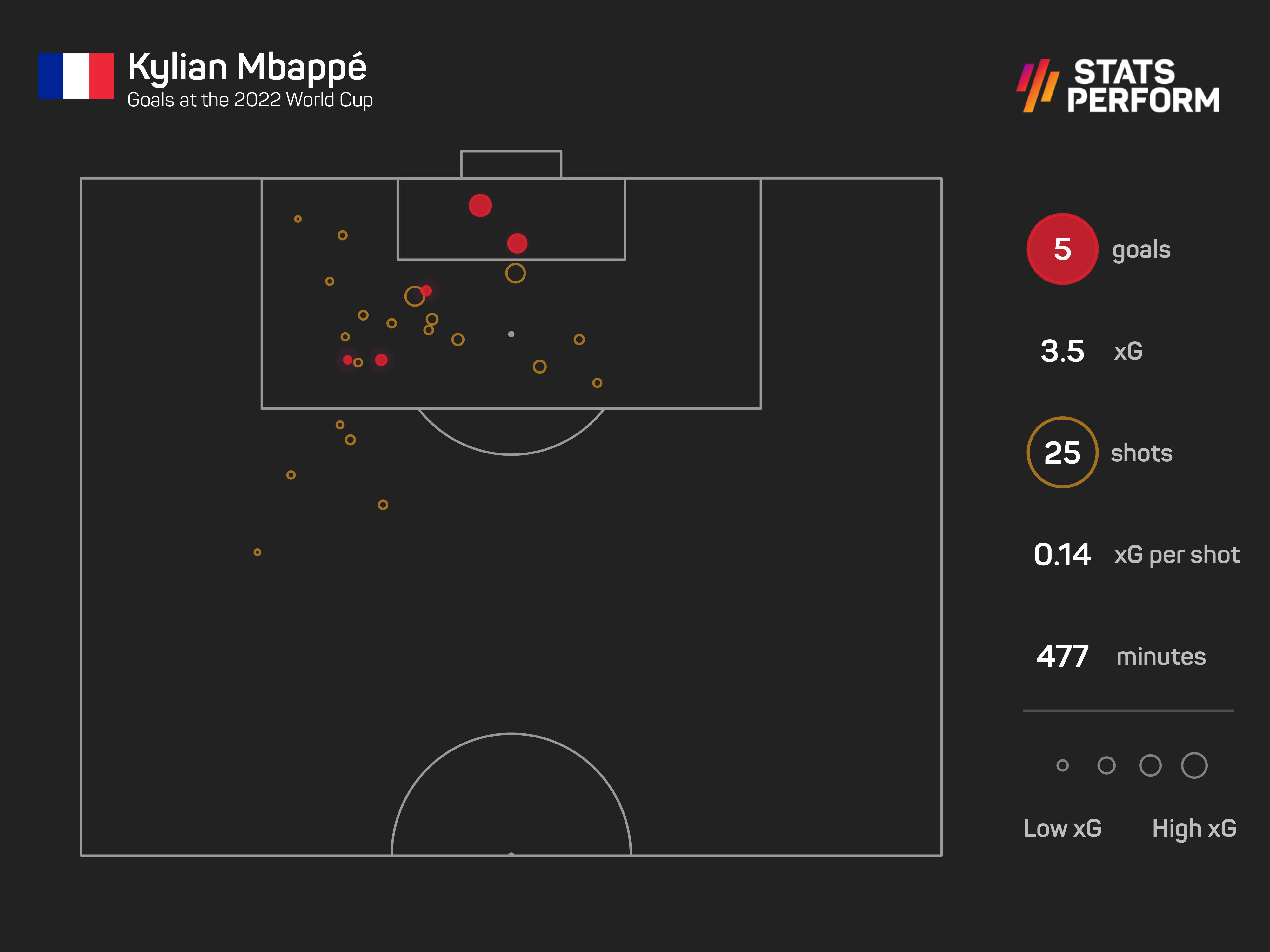 It's five goals apiece heading into the final, though it's worth noting three of Messi's strikes have come from the penalty spot, whereas Mbappe has scored all of his goals from open play.

Messi has averaged a goal every 114 minutes, while his club-mate has registered one every 95 minutes. Both players have outperformed their expected goals (xG), albeit Mbappe, whose xG stands at 3.46 in contrast to Messi's 4.75, more so.

The 35-year-old is now Argentina's all-time leading scorer at the World Cup, with 11 goals, while should he score against France he will become the first player to find the net in the group stage, the round of 16, the quarter-finals, semi-finals and final in a single edition of the tournament.

The duo are incredibly close in this category, too. Messi has taken 27 shots, two more than his opposite number, who boasts a slightly better shot conversion rate (20 per cent compared to 19). Mbappe has hit the target 11 times, with Messi doing so on 14 occasions - a tournament high.

14 - Lionel Messi is the player with the most shots on target made in #Qatar2022 , with 14, scoring in five of them. Finisher.#AskOpta#AskOptaJosé#FIFAWorldCup https://t.co/zZF6VkxsqK pic.twitter.com/ISBVq1XqfV

Assists are not always the best barometer for assessing a player's creativity, of course. Messi does edge out Mbappe in this statistic (three assists to two), but the differential is greater in terms of chances created – Argentina's talisman has crafted 18 goalscoring opportunities to Mbappe's 11.

Messi's expected assists (xA) of 1.63 suggests the finishing of his Argentina team-mates from the opportunities he has provided has exceeded expectations, while Mbappe has also outperformed his xA (1.23).

It's Mbappe who leads the tournament for involvement in open play shot-ending sequences, with 45. Unsurprisingly, Messi is a close second (43); Antoine Griezmann is third, with 13 fewer such involvements.

With his assist for Julian Alvarez's goal against Croatia on Tuesday, Messi matched Diego Maradona's record of eight assists in World Cup finals (since such data is available from 1966 onwards).

Across the last two World Cups, Messi and Mbappe are the players to have generated the most chances following a carry – moving at least five metres with the ball – with 27 and 22 respectively. 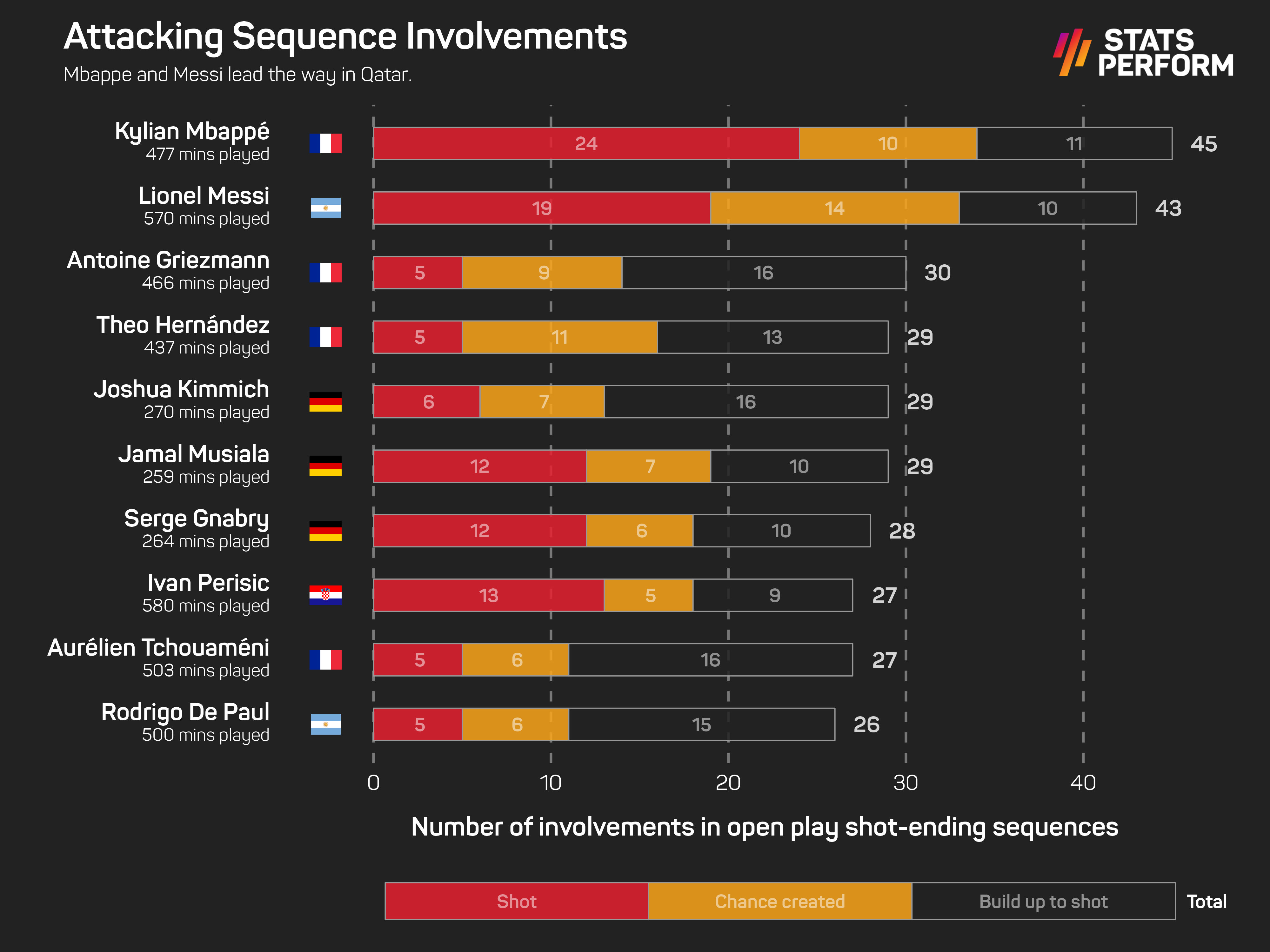 Neither player is renowned for his off-the-ball work, but in possession is when they turn on the style.

Messi is the focus of Argentina's play, and that's reflected by his 432 touches; Mbappe, in comparison, has had 319 touches. However, it is the France forward who has had more touches in the opposition's box (58 to 37).

Mbappe has played 83 successful passes ending in the final third, way down on Messi's total of 121.