Lionel Messi will go down as one of the greatest, if not the greatest, of all time, but Luka Modric is proving he is in the same category.

There should be little argument where Lionel Messi stands among the pantheon of greats.

Whether he is the greatest of all time (GOAT, as the cool kids say) or just one of the very best to ever play the beautiful game, as if that wasn't enough – well, that debate will probably go on forever.

Winning the World Cup, or so far failing to do so in Messi's case, is what has been widely used by some to insist the Barcelona great cannot be considered as the best ever.

So, at what the 35-year-old has said will be his final World Cup, what more of a fitting way to bow out than to lead Argentina's charge to success.

Messi is certainly leading the charge, too. He seems a man possessed, single-handedly dragging Lionel Scaloni's side through against Australia in the last 16 before showing his aggressive side in the penalty shoot-out victory over the Netherlands, having set up one and scored the other of Argentina's two goals in regulation time.

While the world waits for Messi to finally clinch the trophy, another evergreen star in the supposed twilight of his career is still shining bright.

Luka Modric's Croatia team were not fancied to repeat their efforts of four years ago, when they made the final in Russia only to lose to France.

Yet after overcoming favourites Brazil on penalties, it is Croatia and Modric, 37 years young, who will vie to deny Messi his fairy-tale ending.

Tuesday's semi-final at Lusail Stadium might just boil down to two of the game's very best.

After winning the Copa America last year, Argentina were always going to be among the favourites in Qatar. News of Messi confirming this would be his final shot at becoming a world champion only seemed to strengthen La Albiceleste's claim.

They went into the tournament on the back of a 36-game unbeaten run and they were facing Saudi Arabia in their Group C opener - surely, that streak would be extended to 37? Well, it wasn't. Messi scored, from the penalty spot, but Argentina slumped to a 2-1 defeat.

It left them needing to beat Mexico and Poland to ensure progress, and they did just that, if far from convincingly, at least against Mexico when Messi, again, was the difference-maker, this time with a low shot from the edge of the box, placed with delicate precision into the bottom corner, and then an assist for Enzo Fernandez's superb effort.

Messi scored Argentina's opener against Australia and then managed the match in the closing stages as Scaloni's team saw out a nervy 2-1 win after Fernandez's own goal gave the Socceroos hope.

Against the Dutch, Messi assisted Nahuel Molina's opener with the pass of the tournament – a defence-splitting, eye-of-the-needle throughball – before scoring a 73rd-minute penalty. It should have seen Argentina through comfortably, but they capitulated in the closing stages before rediscovering their composure in the shoot-out (Messi scored in that, too).

As they always do with Messi, the statistics speak for themselves.

Messi's six goal contributions (four goals, two assists) in this tournament trail only his Paris Saint-Germain club-mate Kylian Mbappe (seven). To further prove his importance to Argentina, he has been involved in 39 shot-ending sequences in open play at this World Cup, 15 more than any of his team-mates. 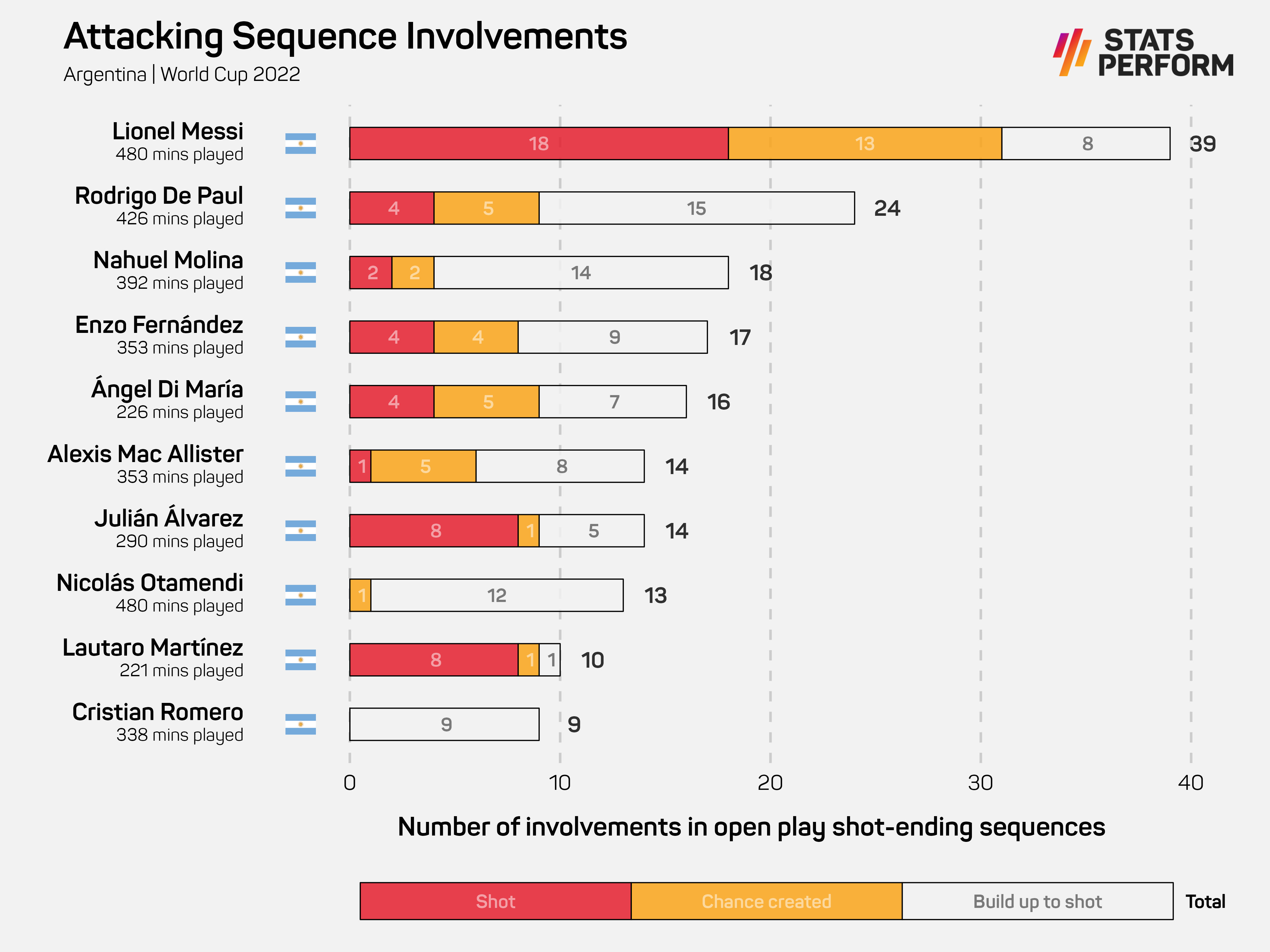 He will equal Lothar Matthaus as the player with the most appearances in World Cup history (25) when he takes to the field on Tuesday, while his goal against the Netherlands saw him match Gabriel Batistuta as Argentina's record scorer in the tournament, with 10 goals.

Messi has both scored and assisted a goal in three World Cup games, including two at this tournament. Since 1966, no other player has ever done so in four separate matches, while one more assist would see Messi equal the late, great Diego Maradona's record of eight at World Cup finals.

There is more than the hint of Maradona-ness to Messi's performances, too. Often reasonably compared to Maradona in terms of playing style, Messi has never quite had the same penchant for chaos as Argentina's first iconic number 10, but it is hard to avoid the similarities of 1986, when Maradona dragged a rather average Argentina side to glory in Mexico.

Maybe Lionel is finally letting his inner Diego loose, and maybe the outcome will be the same – although VAR will ensure there's no 'Hand of God' repeat.

Modric a master at work

Messi will play his 171st game for Argentina on Tuesday. Modric, on the other hand, will make his 161st Croatia appearance.

"It's such a pleasure to see him play, a role model for so many of us, not because of his talents as a player but also his behaviour," said Argentina coach Scaloni of Modric in his pre-match press conference.

"We should enjoy him, just like all the top players. If you love football, you want to see these players on the pitch."

It is, indeed, a pleasure to watch Modric do his thing. It is over a decade since the mercurial midfielder swapped Tottenham for Real Madrid, and the understated nature of his performances have, naturally, seen him go under the radar.

That changed in 2018 when, at 32, Modric won the Golden Ball at the Russia World Cup for his efforts in taking Croatia to their first final.

Croatia might have fallen short against France but Modric was incredible, and he went on to win the Ballon d'Or later that year, becoming the only player other than Messi or Cristiano Ronaldo to scoop that prize since Kaka in 2007.

Arguably, though, his performances in Qatar have been just as good. 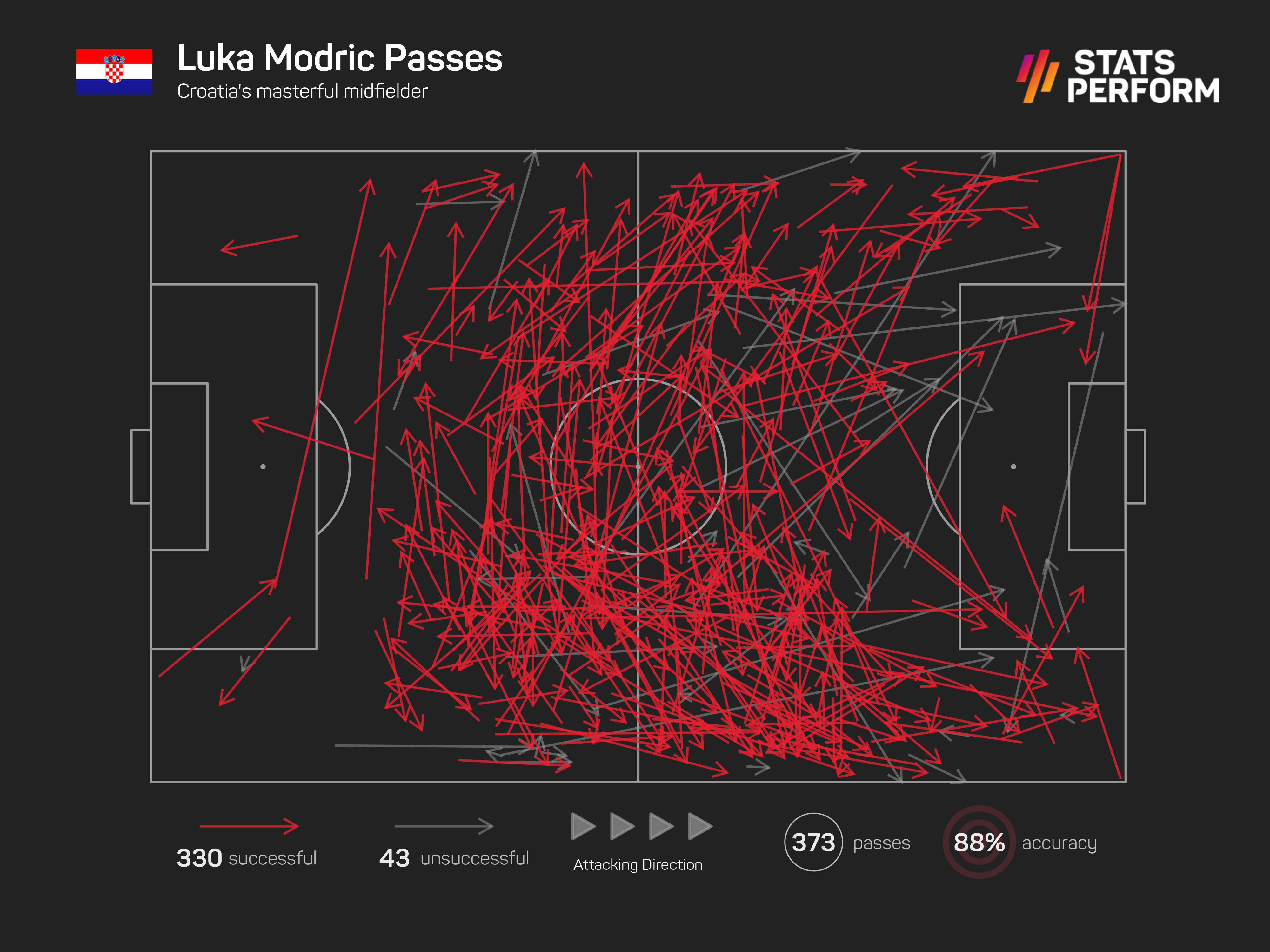 Yes, Croatia's approach under Zlatko Dalic is not the prettiest, but in Modric, Mateo Kovacic and Marcelo Brozovic they have a midfield with a bit of everything; bite, skill and composure.

Captain Modric, who scored a stunning goal in Croatia's 3-0 defeat of Argentina at the last World Cup, is still the standout.

He has made the most World Cup appearances (17) of any Croatian player and has started all five of their games in Qatar. He will become only the fourth player aged 37 or older to start six matches at World Cup on Tuesday, barring any surprises.

Even if his energy levels aren't quite what they used to be (he was subbed off in extra time against Japan in the last 16), Modric has, if anything, got even smarter with when and where he expends that energy.

Twice against Brazil, he skipped through midfield to relieve the pressure on Croatia's defence. His carry distance of 1,455 metres ranks second out of midfielders at the tournament, only behind Spain's Rodri. However, Rodri was playing in defence, naturally meaning he would carry the ball further, given Spain's possession-based approach.

Modric has won seven of his 12 attempted tackles, and 26 of his 58 duels, completing 330 of 373 passes (88.5 per cent). Against Brazil, he completed the most passes and had the most touches of anyone on the pitch.

Like Messi, this is surely Modric's World Cup swansong, but his excellence cannot be overlooked either.

Team-mate Borna Sosa claimed Modric must rank within the best five midfielders of all time, and should he drive Croatia on to their second straight World Cup final, there should be little debate over that.