Portugal underwhelmed at the World Cup in Qatar, and Roberto Martinez has a number of things to consider after replacing Fernando Santos.

When Fernando Santos called time on his eight-year stint as Portugal head coach after their 2022 World Cup quarter-final elimination, few would have correctly predicted his replacement.

Roberto Martinez also left his national team role after the tournament in Qatar, with Belgium disappointingly falling at the group stage.

The former Everton and Wigan Athletic boss took the Red Devils to the World Cup semi-finals in 2018, before reaching the last eight of Euro 2020, being eliminated by the eventual winners in both.

Martinez finds himself in charge of A Selecao now after his appointment was confirmed on Monday, and there is plenty of work to be done.

Qualifiers for the 2024 European Championships get underway in March and with the talent at their disposal, Portugal must be fancied to be among the favourites for the tournament in Germany.

Stats Perform has taken a look at five things in Martinez's in-tray that he will need to consider if he is to find success with his new team.

"Decisions have to be made on the pitch. I won't rush into decisions. I want to meet everyone, and from today I want to talk and meet all the players," Martinez said at his first press conference as Portugal coach.

"Cristiano [Ronaldo] is part of that list. He's had 19 years in the national team and deserves respect, let's talk. From there, it's up to me to make the best list for the European Championships."

Ronaldo has 118 goals in 196 caps for Portugal, undeniably an international record to be proud of, but he will be 38 years old when Martinez takes charge of his first game.

One of the new boss' biggest issues with Belgium was getting the best out of ageing stars, and with Portugal arguably looking far sharper when Ronaldo was benched in Qatar – hat-trick hero v Switzerland Goncalo Ramos in particular – perhaps now is the perfect time to allow the former Real Madrid and Juventus man to fully focus on his new adventure in Saudi Arabia and call time on his international career.

Getting the best out of Joao Felix

This is a problem Atletico Madrid boss Diego Simeone is all too familiar with, hence why Joao Felix is being linked with a loan move to the likes of Manchester United and Arsenal instead of lighting up LaLiga on a weekly basis.

The 23-year-old has plenty of talent, but a lack of consistency belies the nine-figure fee Atletico paid Benfica for him back in 2019.

If Martinez chooses to move on from Ronaldo though, Joao Felix could find the space and responsibility to thrive at international level as part of a team where everyone would be expected to chip in.

Of players to have featured in at least 14 LaLiga games this season, only Mikel Merino, Antoine Griezmann, Ansu Fati and Ousmane Dembele average more than Joao Felix's 0.42 assists per 90.

Arguably Martinez's main struggle by the end of his time with Belgium was managing a defence filled with players who were several years past their prime.

He will need to make sure that Portugal maintain freshness there as a good defence will always give you a chance in international competitions, such as when Portugal conceded just once in four knockout games on their way to winning Euro 2016.

One key decision could be taken out of his hands, with Pepe expected to announce his retirement from international football, but in Ruben Dias, Martinez has the perfect figure to build his defence around.

The Manchester City centre-back is one of the best in Europe and has shown under Pep Guardiola he can also be relied upon in a backline that pushes high to close space and allow the attack to press from the front, something Martinez has often favoured when he has had the tools to do so.

Since his move to Man Utd in January 2020, Bruno Fernandes has proven himself to be one of the premier midfielders in Europe, and at the World Cup, he began to show that he can lead for his national team as well.

Only Kylian Mbappe and Lionel Messi (both 10) had more goal involvements than Fernandes' five (two goals, three assists) in Qatar, while no-one produced more than his three assists.

In the Premier League this season, only Kevin De Bruyne (41) has created more chances from open play than his 40, with the Manchester City man having played a game more, and with plenty of attacking firepower to aim for with Portugal, Fernandes can in theory fill his assist boots over the coming years under Martinez. 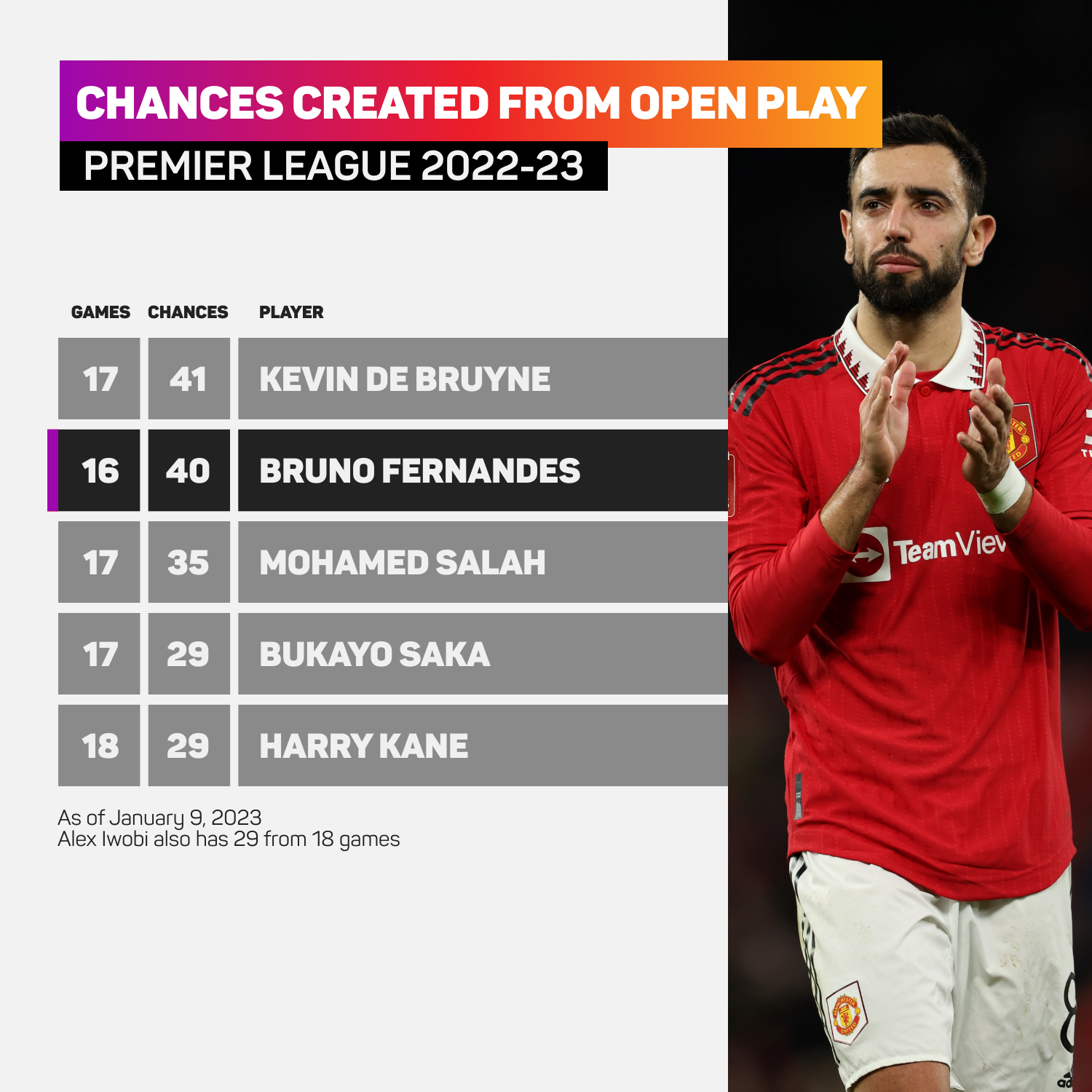 Make the most of Leao

One of those talents Fernandes should be working with is Rafael Leao, one of the most exciting attackers in Europe right now.

While Santos had plenty of other fine players to choose from, it was surprising to see Leao reduced to just substitute appearances in all five games at the World Cup, though he still produced two goals before Portugal were eventually eliminated by Morocco in the quarter-finals.

The Milan forward should really be Martinez's primary weapon on the left of the attack, especially if he can replicate the form that saw him win Serie A's player of the season award as the Rossoneri claimed the Scudetto in 2021-22.