The transfer window will be open for another month and Manchester United have already made two statement signings. That fact alone is something for fans to celebrate.

"We've scrambled before towards the end of the window and now I have to say we're in a good position," manager Ole Gunnar Solskjaer said after securing Jadon Sancho's arrival and a deal in principle for Raphael Varane before the end of July.

The issue of whether one of the world's richest and most successful sports franchises should celebrate making just two transfers is best saved for another time. The fact remains United made a mess of the majority of their recruitment drives before Solskjaer took charge in December 2018. Now, they look like having their best pre-season window since the transformative signing of Robin van Persie nine years ago, a deal that heralded their most recent Premier League title.

More signings could yet come before the deadline at the end of August – although this depends on sales - but United will almost certainly look stronger than last term when 2021-22 gets underway. Their bid to close the gap to champions Manchester City, make a decent fist of a Champions League run and win a first trophy since 2017... well, they all look a bit more promising than they did in late May, in that laboured Europa League final with Villarreal.

Off the pitch, Solskjaer has done some sterling work. Now comes the moment to get the Red Devils firing consistently on it. They are close to the top but, as a 12-point gap to City last season proves, not close enough. Solskjaer's tactical decisions could be the difference between another year of disappointment and a return to their perch atop English football. 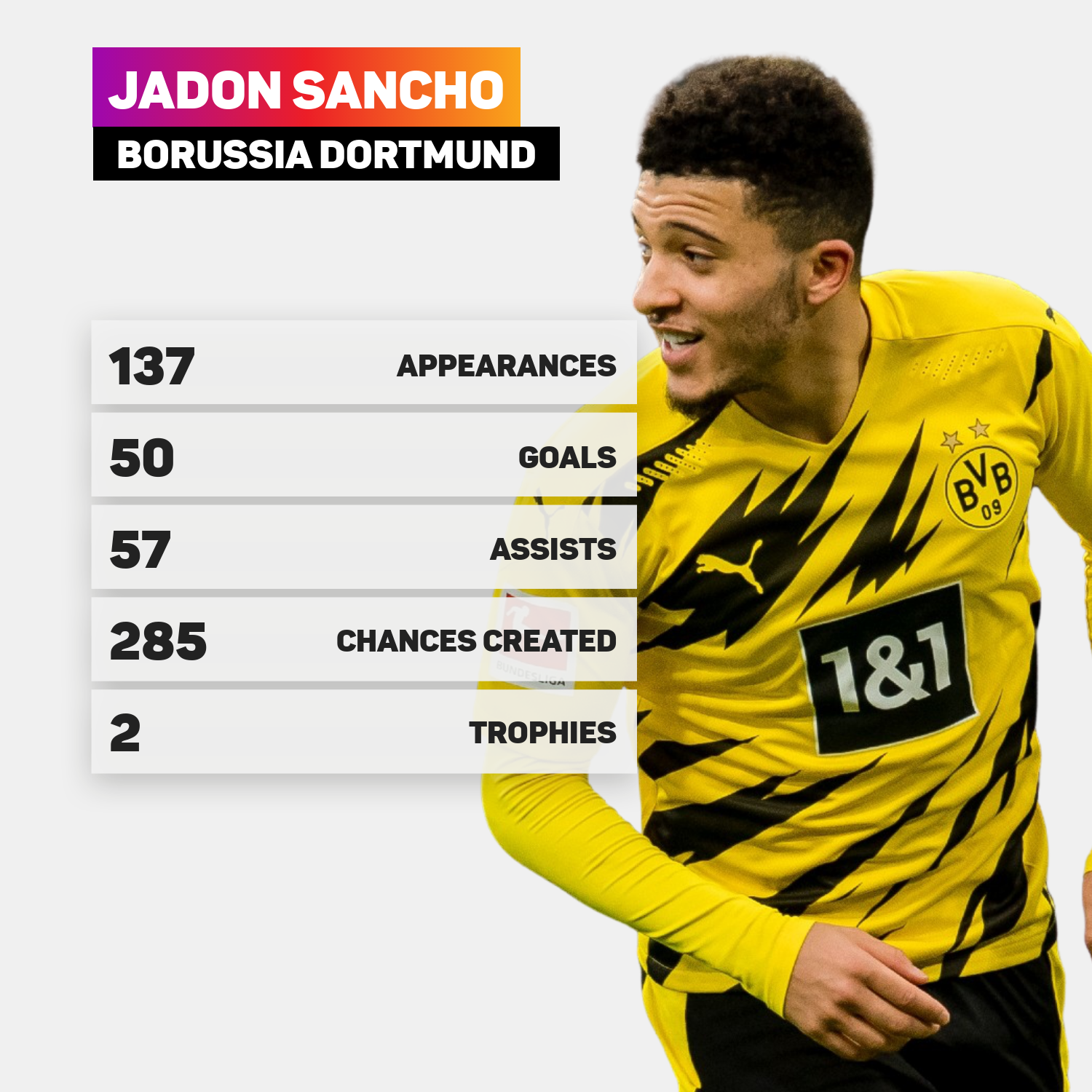 United had to play the long game to bring Sancho back to England, but it's ultimately proved cost-effective. Borussia Dortmund wanted over €100million guaranteed a year ago but sold Sancho in 2021 for a fee understood to be worth £72.9million (€85m), the fourth-highest in United's history.

There's a reason Solskjaer was prepared to be patient. He likes his forwards to be fast, direct and fearless, with spontaneous brilliance often encouraged over more systematic attacking patterns. In that regard, Sancho might just be the ideal Solskjaer signing.

Sancho's attacking output is fearsome. He scored 38 goals and provided 45 assists in 104 Bundesliga appearances for Dortmund; since his debut in October 2017, only Thomas Muller (91) and Robert Lewandowski (137) managed more direct goal involvements. In that time, Sancho also attempted 544 dribbles – 100 more than any other player in Germany's top flight – and completed 284 of them, again the most in the division.

But why stop at one dribble? Over the past four seasons, Sancho also leads the way for multi take-ons – times on the ball when he tried to beat more than one player – with 48, at least 14 more than anyone else in the Bundesliga. In that same period, United's best such performer was Anthony Martial with 39.

Sancho, then, is an optimal player for an attack where improvisation is key. His skill and daring on the ball could be critical to United finding a way through those low-block defences against which they can look notoriously laboured.

But to unleash Sancho to his fullest, Solskjaer must tweak the system.

"As long as them two are playing in midfield for Manchester United, they will not be winning big trophies," former captain Roy Keane said of Fred and Scott McTominay after May's 4-2 home loss to Liverpool. So far, he's been proven correct.

Solskjaer has often favoured a double pivot of Fred and McTominay to screen the defence while allowing Bruno Fernandes creative freedom as the number 10. It's often worked well, particularly against stronger opposition where United have been happy to give up the ball: in 2020-21, they lost only two of the 21 league matches where both players started, averaging under a goal a game conceded. The problem is they only won 10 of those matches.

"Attack wins you games, defence wins you titles," was Ferguson's old adage. In favouring Fred and McTominay last season, Solskjaer focused on both and didn't quite master either. They were sometimes possession-based, sometimes counter-punching, but never entirely comfortable in either guise. 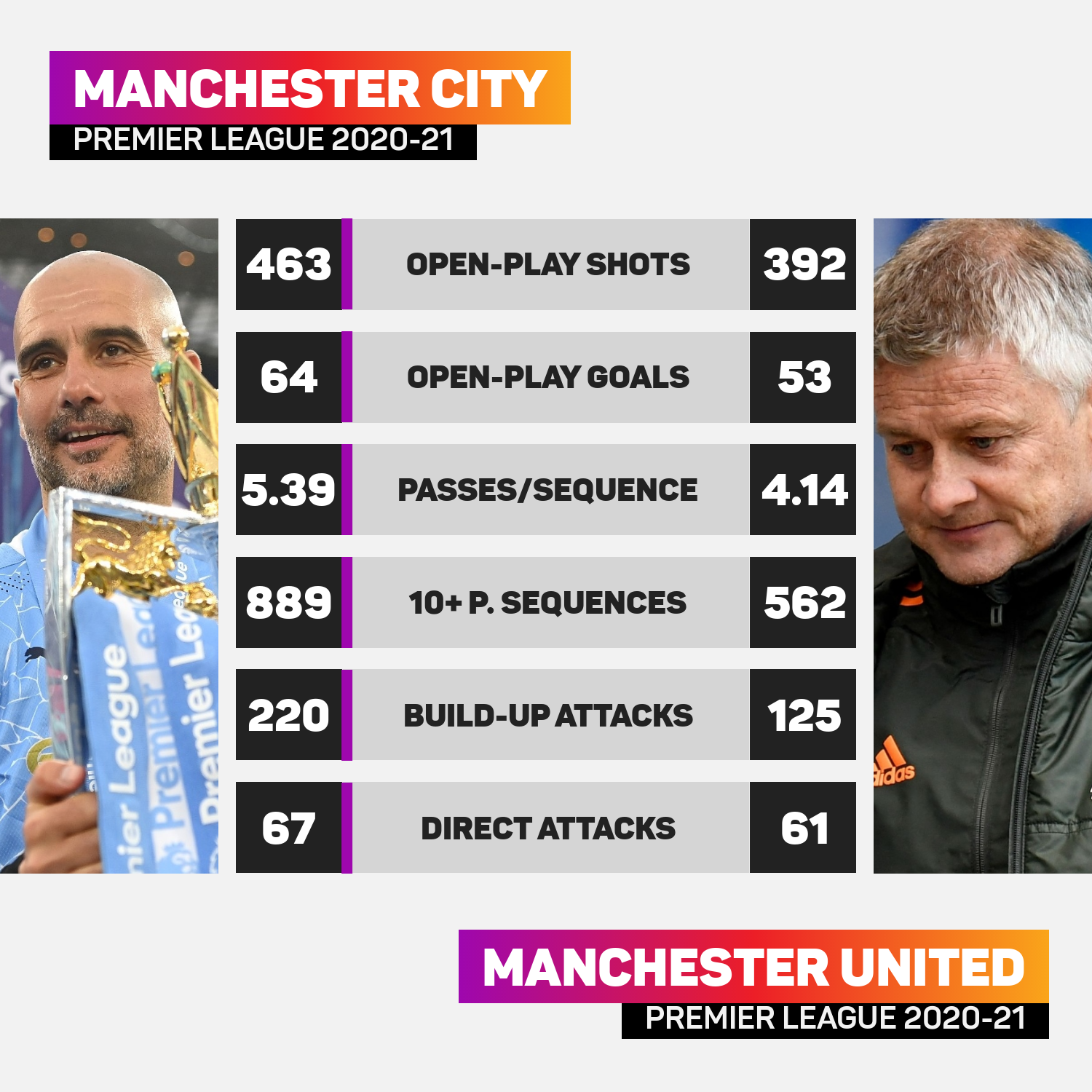 In 2020-21, United put together 562 sequences of more than 10 passes – a figure more than 300 behind champions City. They also ranked only fifth in the league for passes per sequence (4.14) and for build-up attacks (125). However, they were not masters of the quick counter, either: they managed 61 direct attacks last season, the eighth most in the division, and although they scored six times from fast breaks, those goals came from just 13 such attempts – amazingly, seven fewer than City.

United's attack was second only to City for goals scored, but it was still not as effective as it should have been. They finished last season with 392 open-play shots in the Premier League, only the fifth-highest in the competition. Their expected goals tally of 44 put them third, as did their actual goal count of 53, when own goals and penalties are excluded.

One option to sharpen up in the final third would be to abandon the 4-2-3-1 for a 4-3-3, allowing a more forward-thinking midfielder to join Fernandes in the middle. That could be Paul Pogba, but if the France star gets the move away he apparently wants, it is also a role that would suit Donny van de Beek, who underlined his determination to kick on from a poor first season in England by returning for pre-season with some serious extra muscle.

The 6-2 thrashing of Leeds United at Old Trafford showed the value of a midfielder breaking the lines – McTominay, in that case – and United's opener against their old rivals in August would be an ideal time to test the 4-3-3 Solskjaer is said to be pondering. With Fred as the patrolling defensive player – he won possession more often than any other United player (228) last term, and his 81 tackle attempts were only bettered by Aaron Wan-Bissaka (88) – Solskjaer could give licence to two attack-minded midfielders to support Sancho and fit-again Mason Greenwood, likely to start in place of the injured Marcus Rashford. 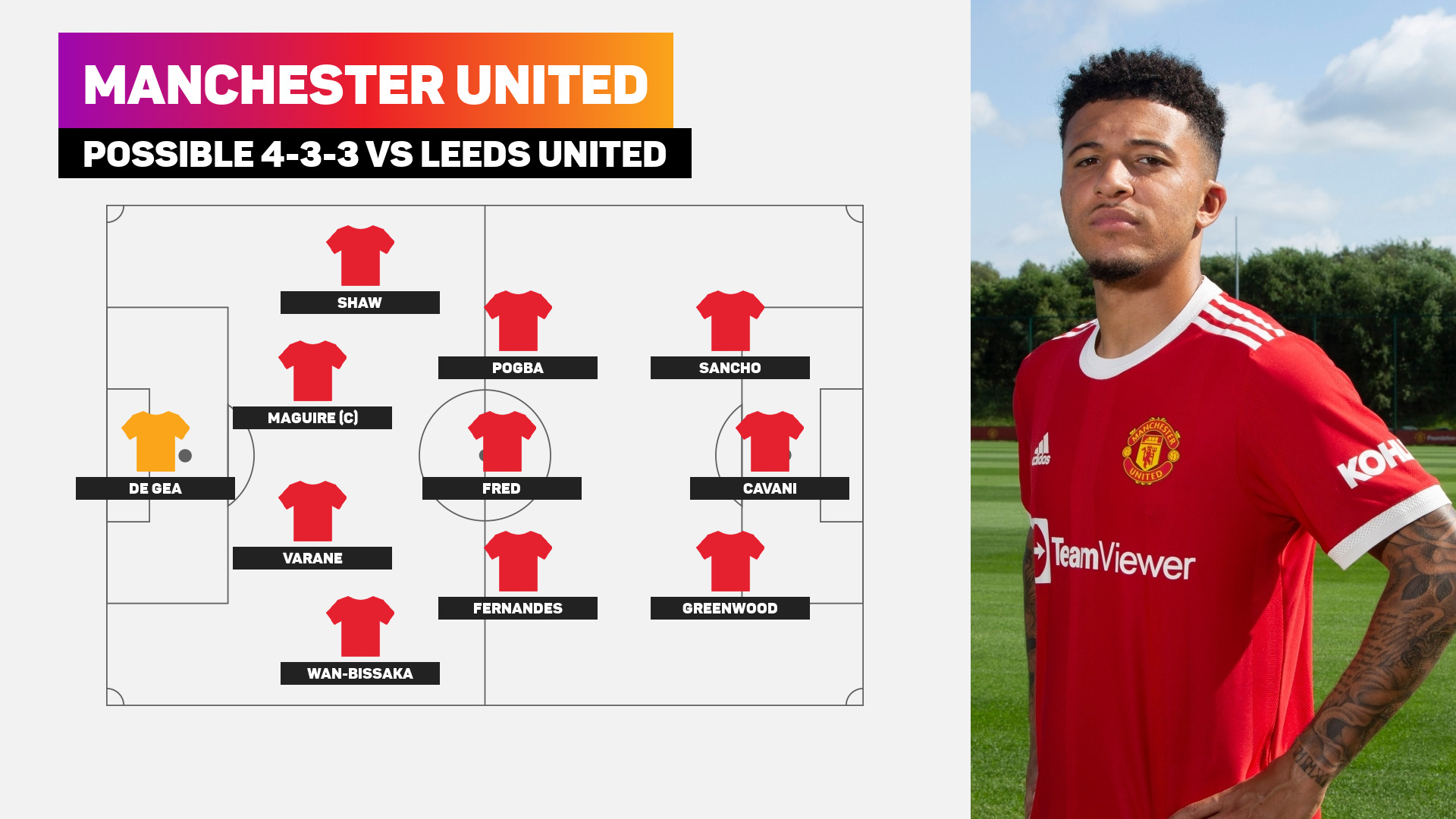 Of course, such a shift from the double defensive pivot puts the defence at greater risk. There will also still be games where more caution is warranted - key Champions League matches, or Manchester derbies. But Solskjaer may already have solved that problem.

Whatever certain pundits may think about the pitfalls of adapting to the Premier League, United look to have pulled off a masterstroke by signing Raphael Varane. 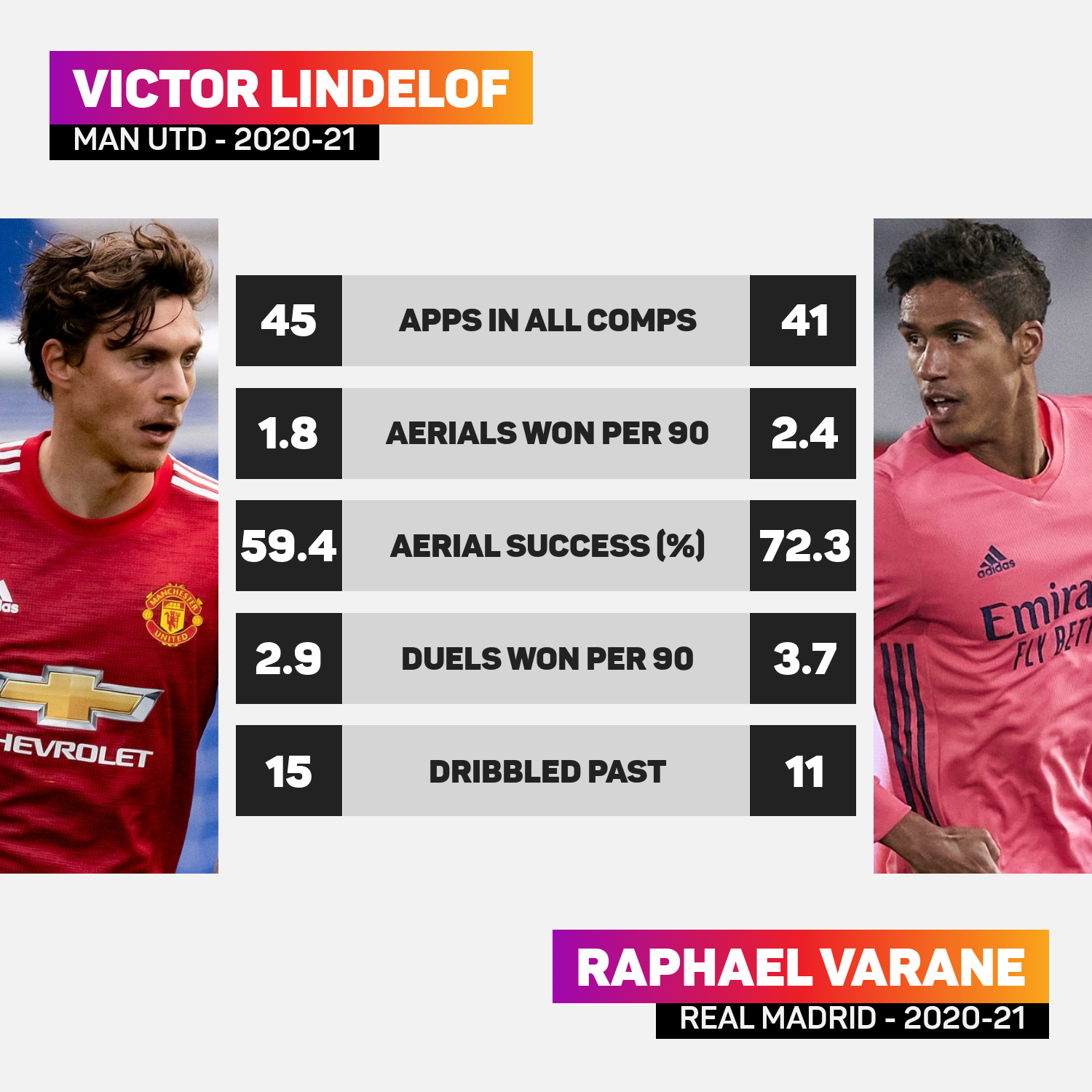 He will also add pace to a United defence that often looks cumbersome when Harry Maguire and Lindelof face direct runners – another reason why Solskjaer liked his double midfield screen. And that extra speed might also let United push further forward: their average starting position of 42.3 metres from their goal last season was deeper than six other sides.

A higher line would make attacking easier and perhaps keep the opposition shot count down. United faced 317 in 2020-21, more than Arsenal, Wolves, Brighton and Hove Albion, and relegated Fulham. Limiting attempts on goal would also reduce the pressure on the goalkeeper, as David de Gea and Dean Henderson continue to battle for the number-one spot.

The centre-back also offers a tactical bonus, to which Solskjaer has already hinted: he can play comfortably enough in a back three. Maguire, Varane and Lindelof would represent an imposing rearguard and allow the rejuvenated Luke Shaw to push up as a wing-back. If United's pursuit of Kieran Trippier proves fruitful, even better. A 3-4-1-2 would give Solskjaer that balance of defensive security without compromising too much on attacking quality, which could be essential for the biggest derbies, knockout games or cup finals. 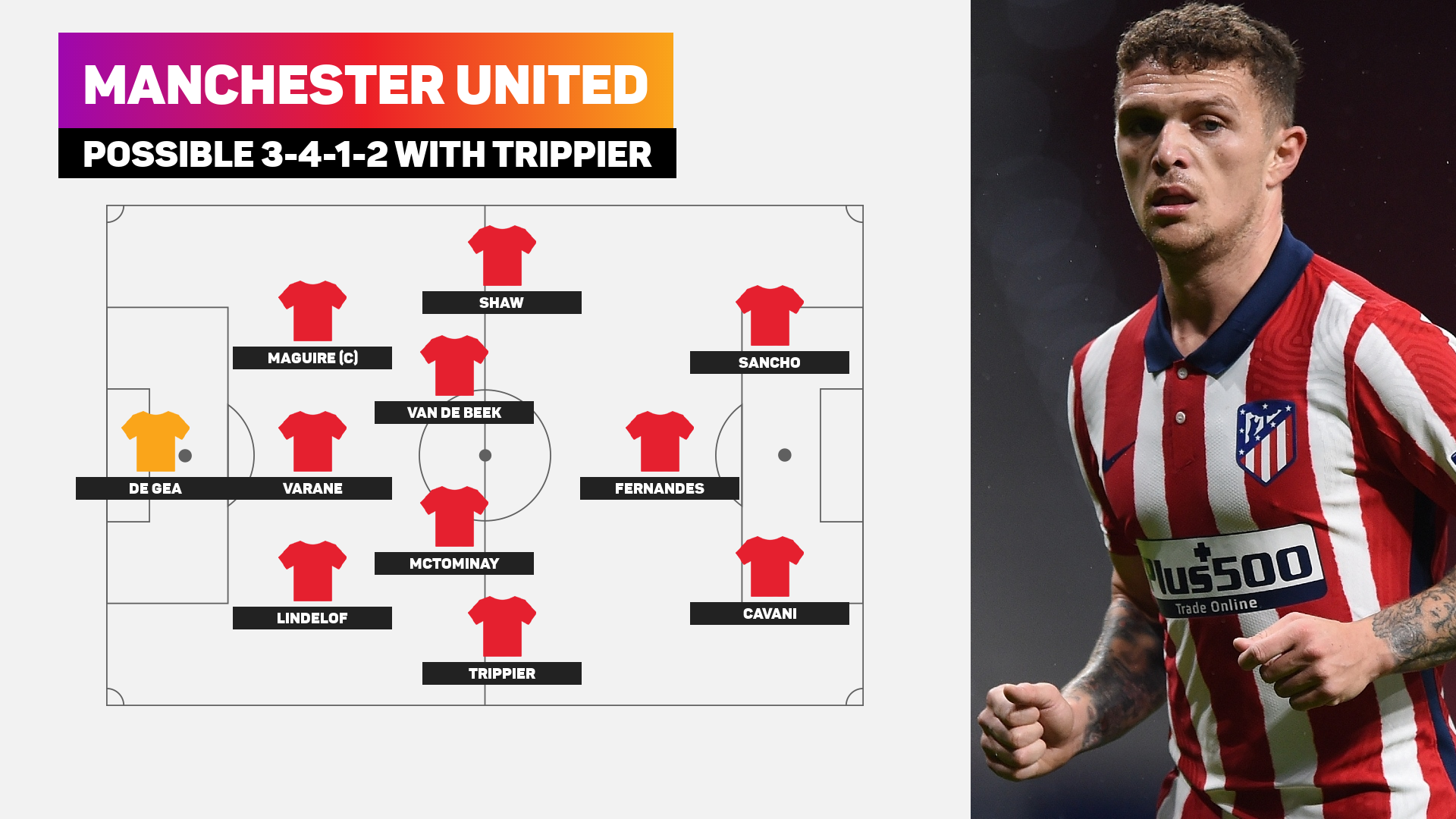 Varane and Sancho give United some serious star power, but also tactical flexibility and game-winning potential. If Solskjaer can trust his defence to stay resolute and unshackle the attack, the gap to City may well begin to shrink – and that elusive first trophy could be within his grasp.

Jimmy Greaves was hailed as one of the greatest ever strikers after he passed away on Sunday.

Jimmy Greaves was hailed as one of the greatest ever strikers after he passed away on Sunday.