Manchester City recorded their ninth successive Premier League victory, but they survived a huge scare along the way against Leicester City.

Though pegged back to 4-3 from 4-0 up, Pep Guardiola's men moved six points clear at the top of the Premier League table following a ninth successive victory.

Kevin De Bruyne scored the first of four goals for the hosts inside the opening 25 minutes, while a pair of penalties from Riyad Mahrez and Raheem Sterling sandwiched Ilkay Gundogan's strike.

The Foxes came roaring back after the break as James Maddison, Ademola Lookman and Kelechi Iheanacho threatened the most unlikely comeback, but Aymeric Laporte and Sterling got the Citizens back on track and secured the points. 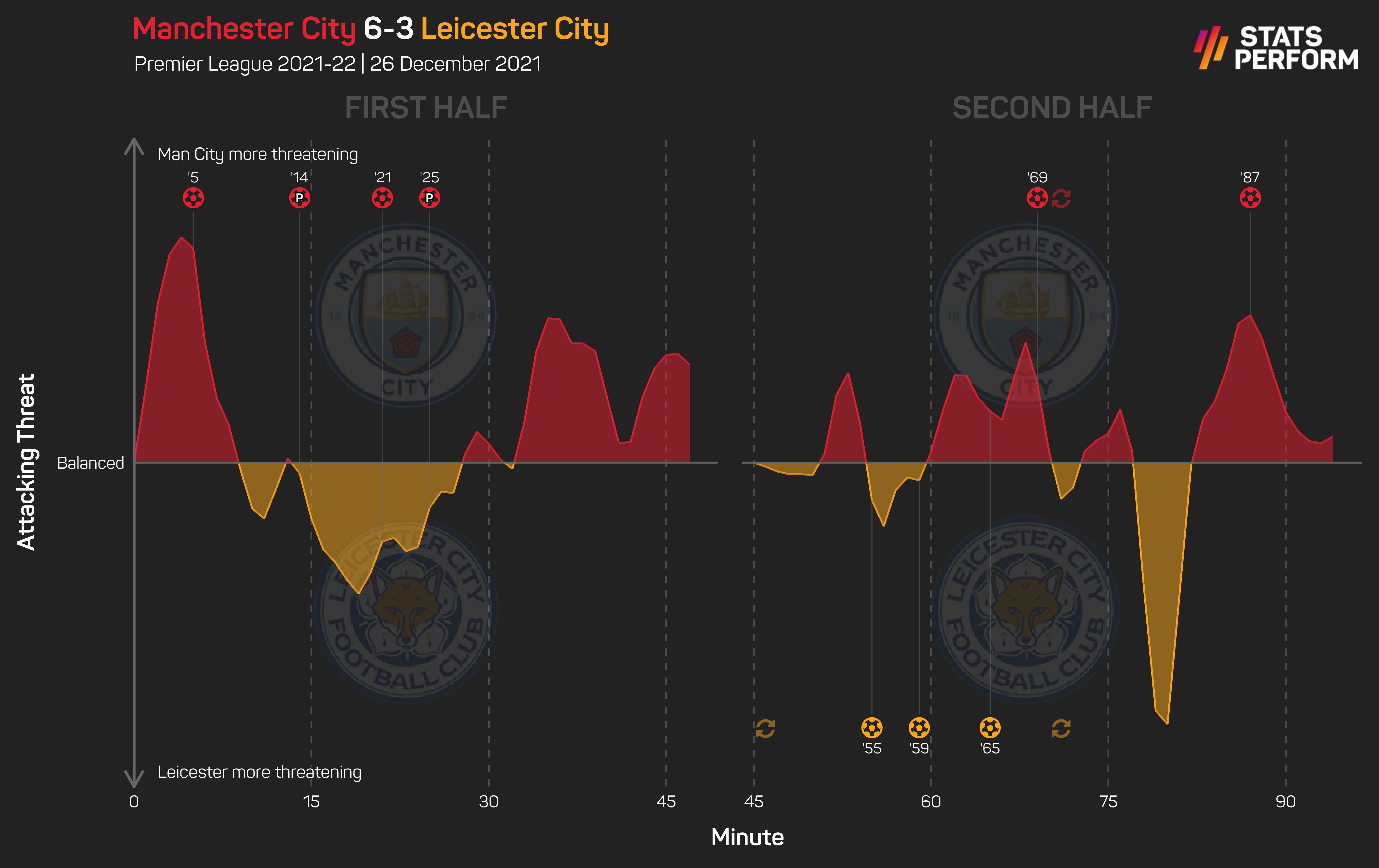 The hosts doubled the advantage with Mahrez, who had lost in all five of his previous Premier League appearances on Boxing Day, firing home from 12 yards after Youri Tielemans bundled over Laporte.

Gundogan made it 3-0 after another lovely exchange of passes culminated in Schmeichel parrying Joao Cancelo's low cross straight to the Germany international, who made no mistake from close range.

Three became four soon after, with Tielemans the offender again as he brought down Sterling, who picked himself up and emphatically swept his penalty into the top corner.

Nevertheless, Leicester responded brilliantly after the break. The visitors halved the deficit by the hour mark with a couple of quickfire counters resulting in Iheanacho well-timed throughballs for Maddison and Lookman to finish.

Former Man City forward Iheanacho then got in on the act to reduce the arrears to a single goal, but the hosts pulled clear from two Mahrez corners, with Laporte and Sterling profiting.

Real Madrid dominate the men's Ballon d'Or nominations, as do fellow Champions League winners Lyon in the shortlist for the women's award.

Aguero would be surprised if City let Silva join Barcelona

Bernardo Silva would represent a superb acquisition for Barcelona, according to Sergio Aguero, though he doubts a move will happen.

Ronaldo may 'regret' moving back to Manchester United, says Gullit

Ruud Gullit believes Cristiano Ronaldo regrets moving back to Manchester United, who he also accused of "living in the past".

The arrival of Filip Kostic to join Alex Sandro as left-sided defensive options at Juventus has led to Luca Pellegrini's German loan.

When Ronaldinho was king: The last time Lionel Messi was out of the Ballon d'Or running

Lionel Messi was not among the 30 names shortlisted for the Ballon d'Or on Friday, the first time that has happened since 2005.

England defender Fikayo Tomori committed his future to Milan on the eve of the Serie A season.