Manchester City have retained the Premier League title, and these are the key moments behind another success for Pep Guardiola.

Manchester City have done the job, just about.

Their remarkable 3-2 comeback victory over Aston Villa on Sunday ensured that the Premier League title is theirs for a fourth time in five seasons, ending Liverpool's hopes of a remarkable quadruple in the process.

While Liverpool will now turn their full focus to the Champions League final as they look to secure a third trophy of the campaign, Pep Guardiola will look to build on his side's domestic dominance heading into next season.

Erling Haaland's impending arrival is a strong start to doing just that, and City will have another go at the Champions League next term too with the Norway forward leading their line – the issue of playing without a "proper" number nine finally put to bed.

Had Guardiola and City got their way in 2021, they would have had a striker for this season, too, but Tottenham did not budge on their valuation of Harry Kane.

Yet that lack of a natural centre forward has ultimately not proved costly, and here, Stats Perform looks at the key moments behind City's title success. Grealish arrives, but no Kane

City broke the English transfer record to sign Jack Grealish for £100million, and while the England international's form has at times been questioned, it was a statement of intent from the champions.

That being said, they missed out on Kane, meaning Guardiola would once again have to do it the hard way... or, at least, rely on his plethora of world-class attacking midfielders to play up front.

Ready for the next chapter! So proud to have joined the Premier League champions, can’t wait to get started!   pic.twitter.com/snoKdNQSpT

The failure to sign Kane was highlighted, ironically, in a 1-0 defeat to Spurs to start the season, though City bounced back with 5-0 thrashings of Norwich City and Arsenal.

City fell short in last season's Champions League final against Chelsea, but on September 25, they rocked up at Stamford Bridge and, if the signing of Grealish was a statement of intent made off the pitch, this performance was one made very much on it.

Guardiola's team delivered a stellar display, especially in the first half, with Gabriel Jesus' goal enough to end Chelsea's unbeaten start to the season. 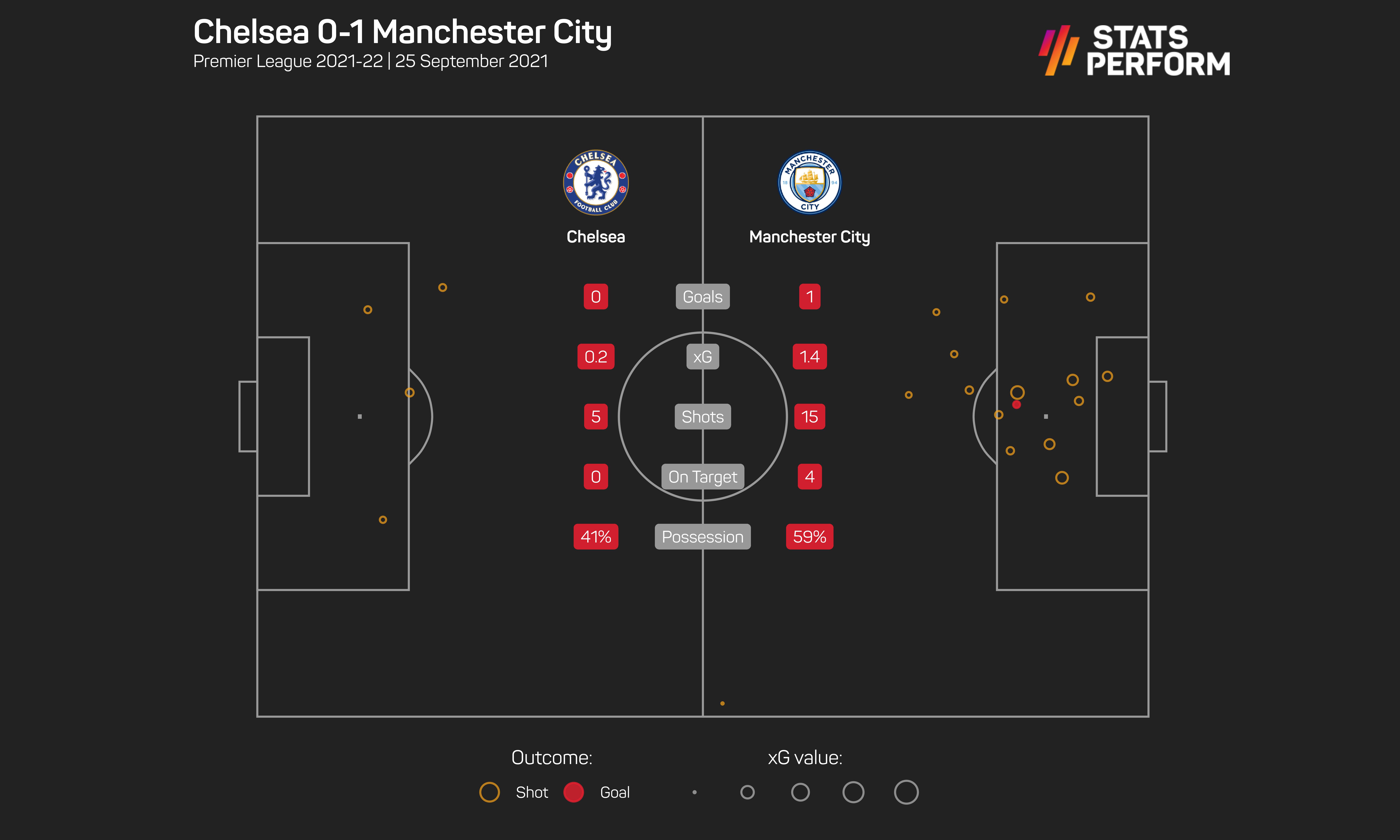 City suffered a surprise set-back at the end of October, losing 2-0 at home to Crystal Palace. Fortunately for them, Liverpool drew 2-2 to Brighton and Hove Albion at Anfield on the same day, and Guardiola's team rallied the following week.

A 2-0 win over Manchester United at Old Trafford was as dominant as you could get at the home of a city rival. The xG tells its own story – City's 2.37 to United's 0.75, 16 attempts to five, with five on target from the visitors, who hit the woodwork twice.

Twelve of City's shots came from inside United's area, showing just how easy they found it to carve open their neighbours, who managed just four touches in the opposition box (City had 32, and 92 final-third entries). The victory sparked a 12-game winning run that was bookended by a 1-0 home success over Chelsea and included a 7-0 rout of Leeds United and 6-3 dispatching of Leicester City. 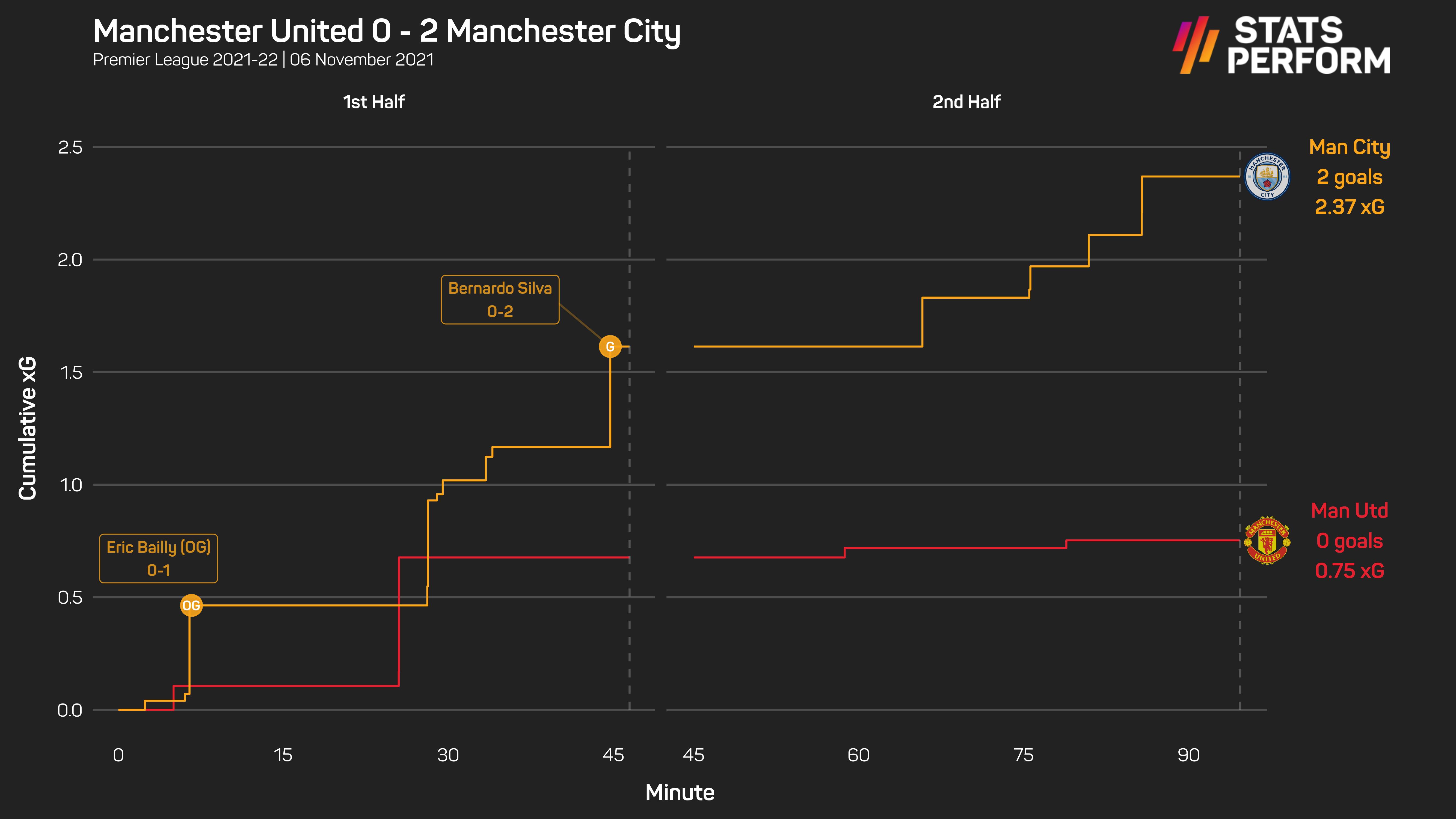 A 3-2 home defeat to Spurs snapped a 15-game unbeaten run that had seemingly put City well on track to securing the title with relative ease. And it appeared they may well drop points again in the next match, a tough fixture against relegation-battling Everton at Goodison Park at the end of February.

Phil Foden struck eight minutes from time to seal a 1-0 victory that moved City six points clear at the top of the Premier League, but Everton were denied the chance for a late equaliser from the penalty spot when referee Paul Tierney and VAR Chris Kavanagh failed to spot a handball by Rodri.

The Premier League clarified that the penalty was not awarded because there was insufficient evidence to show the ball struck Rodri below the level of his armpit, not because Richarlison had strayed offside in the build-up, and referees chief Mike Riley subsequently apologised to Everton for the mistake.

"Can this episode affect a whole season? I will review a lot of incidents. It looks offside for Richarlison; if it's not offside, it's a penalty," said Guardiola after the incident. Had Everton been awarded the penalty, and converted it, then the title might well be Liverpool's.

With both Premier League meetings between the title rivals finishing all square, it was Liverpool who got the edge in the FA Cup in April, winning the semi-final clash 3-2. The sides seemed destined to meet again in the Champions League final, yet Real Madrid had other ideas.

Quicker than Carlo Ancelotti could raise his eyebrow, Madrid turned a tie that seemed all wrapped up in City's favour on its head thanks to two Rodrygo goals, and Karim Benzema's extra-time penalty capped off one of the all-time great comebacks, and one of the all-time worst capitulations, in the competition's history.

Yet City, who had beaten Leeds 4-0, Watford 5-1 and Brighton 3-0 in their previous three league outings, responded with a 5-0 demolition of in-form Newcastle United, with late goals from Phil Foden and Raheem Sterling really doing wonders for their goal difference. To boost their mood, Liverpool had drawn with Spurs at Anfield a day earlier.

3 - Against Wolves, Kevin De Bruyne became the first player since Harry Kane against Hull City in May 2017 to score three goals in a Premier League game with his weak foot, while he is the first midfielder in the competition's history to do so. Majestic. pic.twitter.com/HXEvAknM4l

Gundogan sparks a comeback for the ages

City's second-half comeback against West Ham dashed Liverpool's hopes of a true slip-up, though Riyad Mahrez's penalty miss in that match did allow the Reds to close the gap to one point heading into the final day, meaning Guardiola's side needed a win to guarantee the title.

In a narrative a Hollywood scriptwriter would have done well to dream up, Liverpool legend Steven Gerrard was the manager tasked with ending City's charge and, in the process, giving the Reds the title (should, of course, Jurgen Klopp's team beat Wolves).

And that narrative seemed set to rule when Villa went 2-0 up at the Etihad Stadium thanks to goals from Matty Cash and ex-Liverpool star Philippe Coutinho, with the visitors' two-goal lead still intact going into the last 15 minutes.

But Ilkay Gundogan – on what could well have been his final City appearance – had other ideas.

After coming on from the bench, he hauled City back into it with a header from Raheem Sterling's cross and, following Rodri's equaliser, the Germany international tucked in from a Kevin De Bruyne centre to complete a stunning, title-clinching comeback.

Maybe City should give this man a statue, too Congrats Gündo, Congrats @ManCity   @IlkayGuendogan

Mohamed Salah has thanked Sadio Mane after the duo struck up a fearsome partnership with Liverpool, as the latter departs for Bayern Munich.

'He made it all possible' - Klopp hails Mane after Liverpool exit

Jurgen Klopp has passionately hailed Sadio Mane's contributions for Liverpool after his move to Bayern Munich was confirmed.

Sadio Mane says the attraction of a new challenge motivated him to leave Liverpool for Bayern Munich after a trophy-laden spell at Anfield.