As Celtic reportedly try to add to their growing Japanese contingent, Stats Perform looks at the numbers behind the trio.

If Kyogo Furuhashi is any indication, Celtic should be looking to Japan for more players, right?

Former Yokohama F.Marinos boss Ange Postecoglou used his J1 League insight to lure the previously unheralded Kyogo to Parkhead and what a signing it has proven to be – the Japan international has taken Glasgow by storm with 14 goals in all competitions.

Now, Celtic manager Postecoglou is reportedly preparing another raid on Japan's top flight, including his former club, to help bolster his title-chasing side in the January transfer window.

F.Marinos star and joint Golden Boot winner Daizen Maeda, Kawasaki Frontale utility Reo Hatate and Gamba Osaka's Yosuke Ideguchi are believed to be all closing in on moves to Celtic as the Bhoys' Japanese contingent grows.

With speculation mounting, Stats Perform looks at the numbers behind the trio, using Opta data.

Postecoglou leaned on his experiences as a rival coach to prise Kyogo from Andres Iniesta's Vissel Kobe at the start of the season, but it is a completely different matter regarding Maeda, who was signed by the Australian coach, initially on loan in 2020.

Following a difficult loan spell in Portugal via Maritimo, Postecoglou turned to Maeda after leading F.Marinos to their drought-ending J1 League title the season prior. The 24-year-old has not looked back, taking his game to a new level with the runners-up in 2021.

The two-time Japan international shared the Golden Boot with Frontale talisman Leandro Damiao after the pair both scored 23 goals, while he was named in the league's Best XI.

With pace to burn and the ability to play on the flank or through the middle, Maeda fits Postecoglou's high-octane brand of football and pressing philosophy to a tee – he tallied the most sprints across the league (1,457), well ahead of Consadole Sapporo's Tsuyoshi Ogashiwa (869). 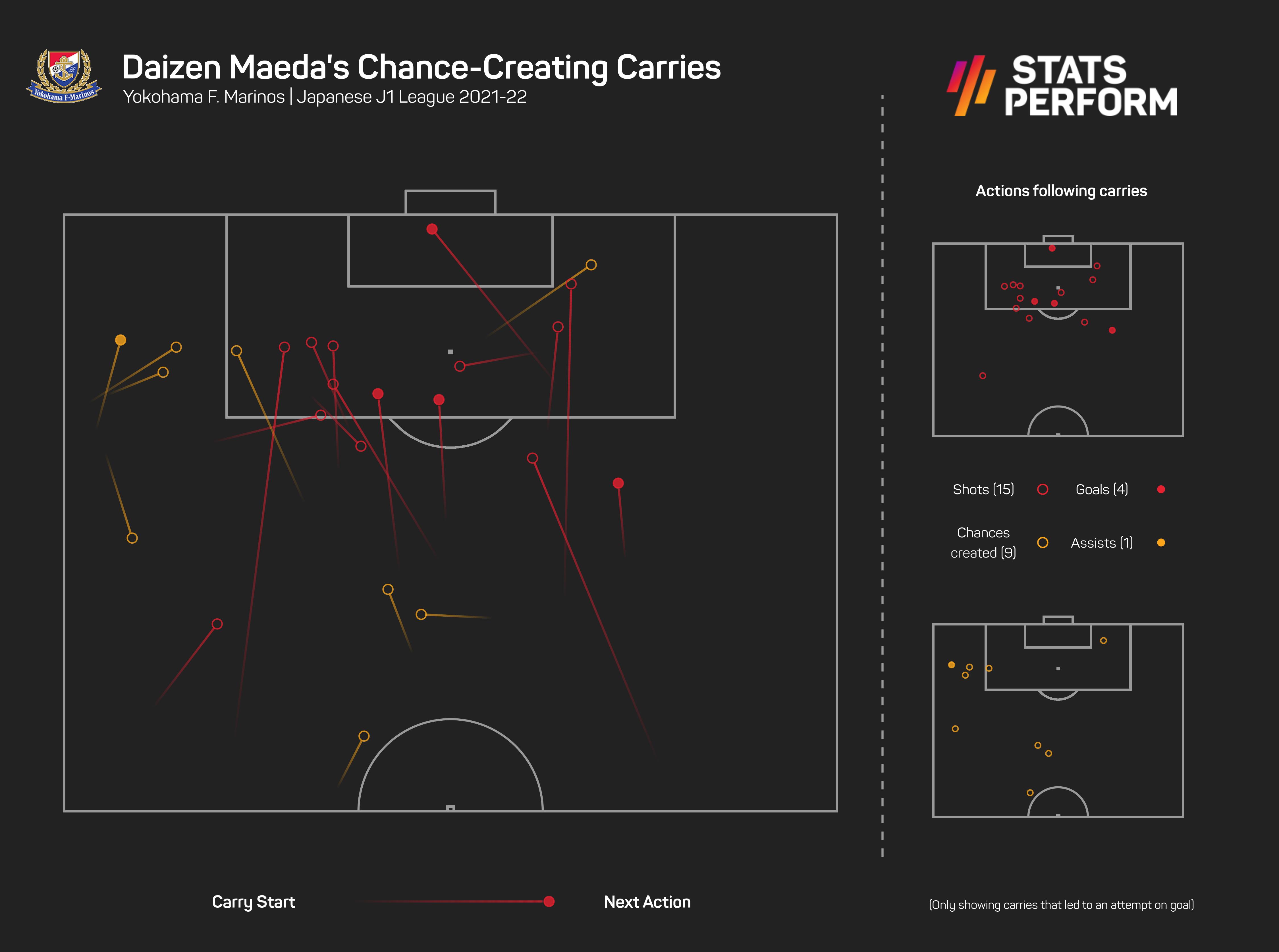 "I never imagined I would end the season as top scorer in the league. I feel I have been able to prove I was a good signing here," Maeda, who could provide another dynamic to Celtic's attack having scored a joint-league-high six headed goals, said at the end of the season. "As always it was great to score, but I would have liked to have ended the season with a win.

"I've had a great season although I am disappointed we never managed to win the title, but on a personal level, I am very proud I was able to finish as top scorer. I always want more goals. You can never score enough.

"I believe this team can go on and have a great season next year too. Whatever happens, Marinos are a great club. I've never hidden my ambition to play in Europe. When I tried before in Portugal, Covid ruined it for me. This season has changed everything for me. Goals and a call-up for my country. For me, it's just the start."

If Celtic want a man that can cover a number of positions, Hatate is their guy.

A defender, midfielder or forward, Hatate is coming off his second successive top-flight crown with the league's dominant force Frontale, who have won the title in four of the last five years.

Hatate has played a key role in helping maintain Frontale's dominance since making his debut in 2018.

The versatile 24-year-old – who has not played abroad, unlike Maeda or Ideguchi – is fresh off a stellar season that saw him named in J1 League's Best XI.

Like 2020, Hatate scored five goals in 30 appearances, while he supplied two assists in the league as he often played in the middle of the pitch, though he can also be deployed at left-back.

Comfortable on the ball and secure in possession, Hatate boasted a passing accuracy of 82.1 per cent in 2021. As for his creativity, he created 33 chances, highlighting his vision. He ranked in the top five for shots on target (third, 22), total shots (fourth, 59) and passes in opposition half (five, 1,297) among all defenders and midfielders.

Covering plenty of ground, Hatate also demonstrated his defensively capabilities throughout the campaign with 45 interceptions and 159 duels won, with a 53.4 success rate. 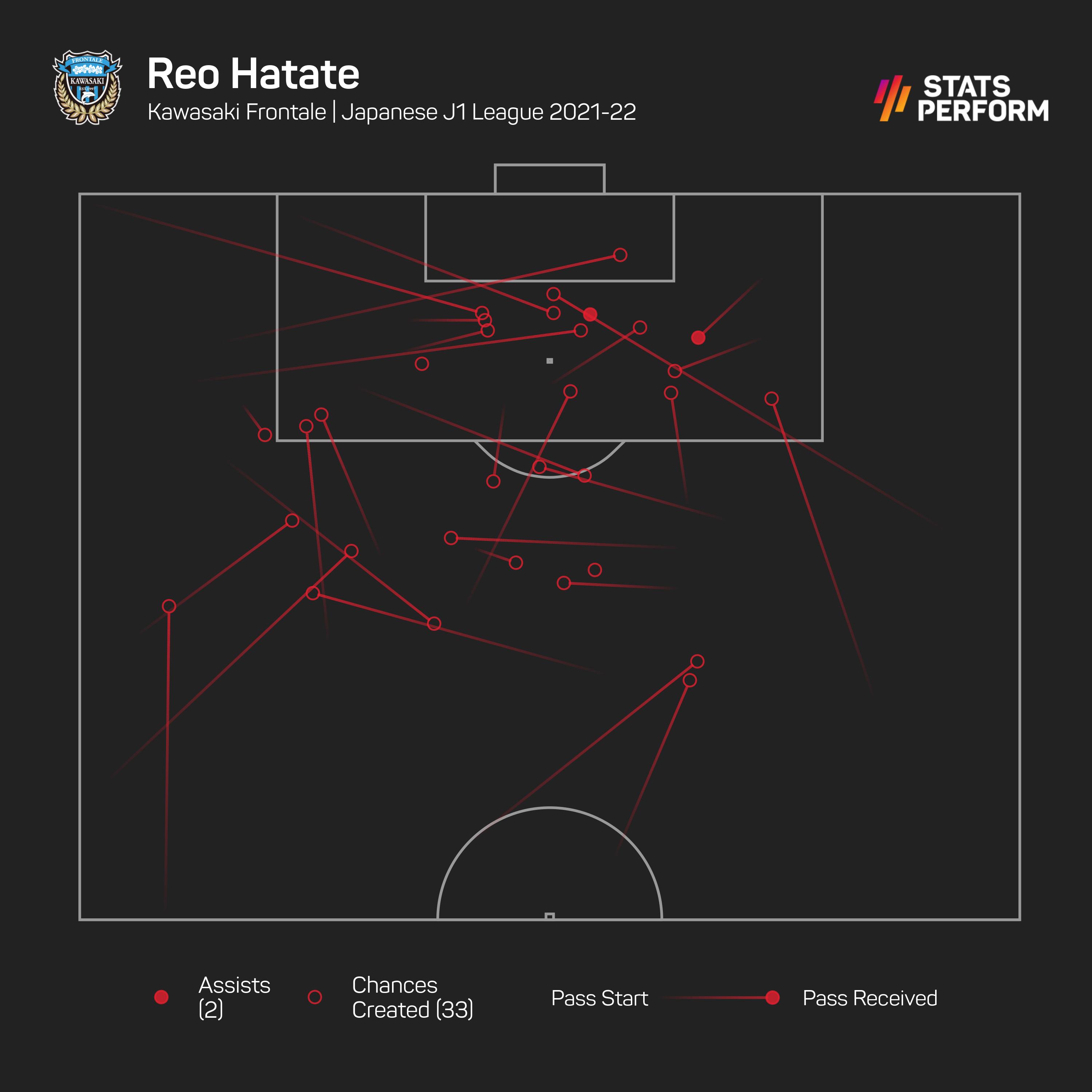 Of the three players targeted by Celtic, the 25-year-old is somewhat the most surprising.

Labelled "wonderful" previously by former Manchester United playmaker Shinji Kagawa, Ideguchi endured a forgettable time in Europe – he joined then-Championship outfit Leeds United on a four-and-a-half-year contract in 2018 but never made an appearance for the club.

Ideguchi then bounced around on loan at Cultural Leonesa in Spain and Greuther Furth in Germany before returning to boyhood club Gamba Osaka, where he has excelled across two spells.

A player with a lot of potential upside, Ideguchi is more of a holding midfielder and is capable of finding the back of the net.

While he did not score or register an assist, unlike the season prior when he scored four times and teed up three goals, Ideguchi's work rate and tenacity was invaluable for Gamba. 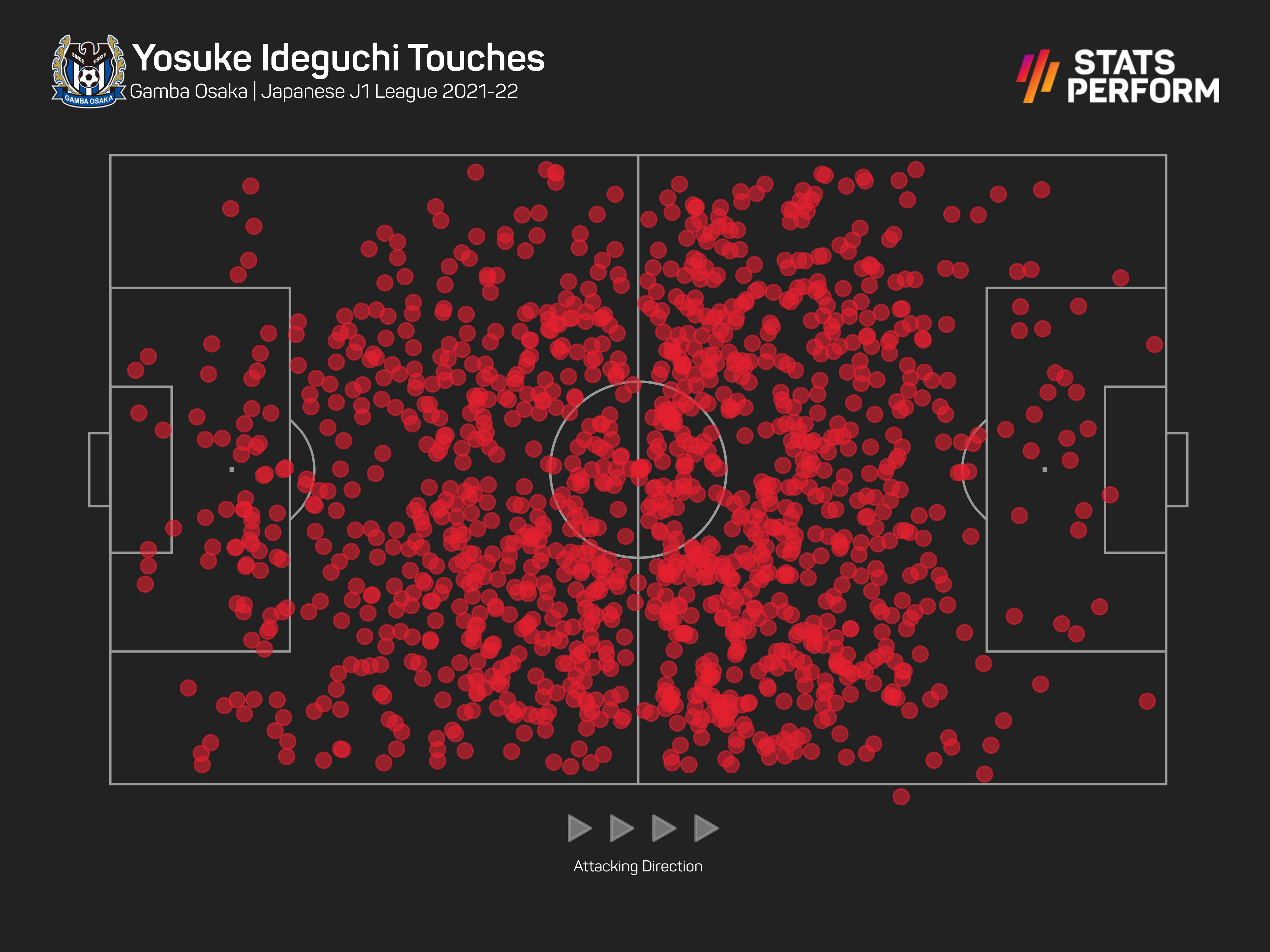