Barcelona have endured a torrid year but have the chance to end it on a high when they tackle high-flying Sevilla in LaLiga on Tuesday.

Julen Lopetegui believes Barcelona finally have a clear vision for their future as his Sevilla side attempt to inflict one final blow of a terrible year for the struggling giants.

It has been a woefully grim 2021 for Barcelona, with the club having encountered dire financial problems that were a factor behind their greatest player, Lionel Messi, being forced to leave.

On the field, they won the Copa del Rey in April but have endured a torrid time in the Champions League and LaLiga, with another club legend, Ronald Koeman, losing his job as coach as a result.

The COVID-19 crisis has hit Barcelona hard, but out of the chaos of the last 12 months has risen an emerging group of young players who could save the club a fortune in transfer fees and point to a bright future on the pitch.

The likes of Pedro, Gavi, Ez Abde and Nico Gonzalez have come to the fore, at a time when Barcelona cannot rush to the cheque book to solve their problems.

With Xavi returning to the club as head coach, there are grounds for optimism again at Barcelona. Yet results continue to be mixed, and the perennial LaLiga title challengers are nowhere near that battle this time around as they head into their final game of the calendar year.

They travel to face a Sevilla side who sit second and are six points behind leaders Real Madrid with a game in hand.

Former Spain and Madrid boss Lopetegui would love his team to head into the winter break on a high, with this season one where they may not have to worry unduly about Barcelona entering the title race.

That could change if seventh-placed Barca win on Tuesday and shrink their deficit to Sevilla down to seven points, and Lopetegui has seen enough of Xavi's work-in-progress team to be wary of their threat.

Yet a 2-1 win at the weekend against last season's champions Atletico Madrid means Sevilla are on a high. 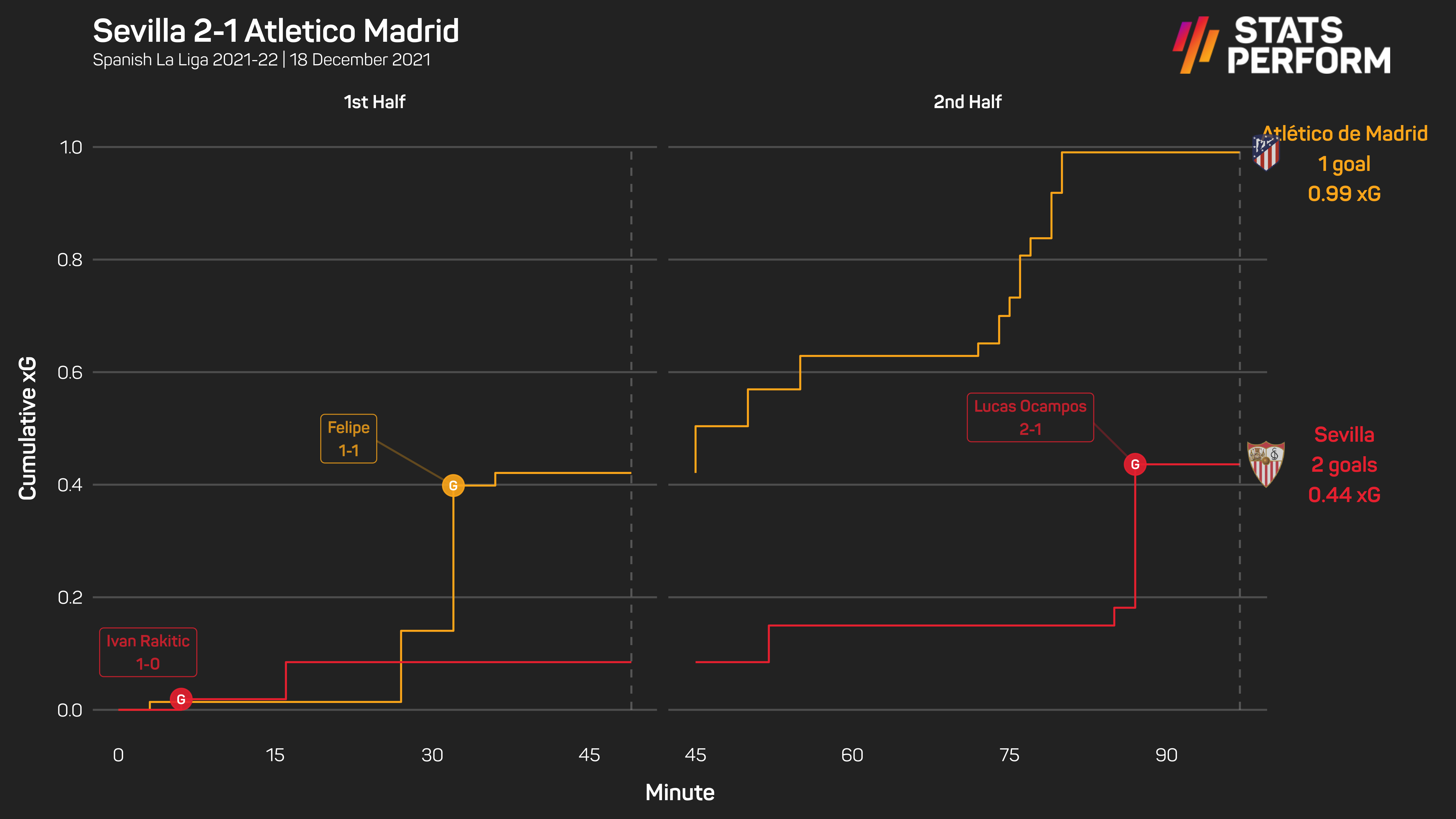 Lopetegui said in Monday's pre-game news conference: "Very recently we were playing one tough game and now another that is even tougher awaits us.

"We will measure ourselves against one of the best Barcelona [teams] for a long time.

"They have improved a lot, with players that you'd struggle to see at other teams, young but very good. They have got players back such as [Ousmane] Dembele, so we're expecting them to be very strong and with the influence of Xavi.

"We'll try to be fully recovered and prepare well, today we trained with 13 first-team players so we'll have to wait until tomorrow to make our final decisions."

Sevilla and Barcelona have both scored 28 goals in LaLiga this season, but the leakier defence has been that of the Catalan giants, shipping 21 in 17 games compared to Sevilla's league-best 12 conceded. Curiously, Barcelona have made just one error that has led to a goal, while Sevilla have made four.

There has also been a major disparity between the finishing of each team. Barcelona have an expected goals (xG) score of 31.06 in LaLiga, but have fallen short of matching that, while Sevilla have impressively outperformed their xG total of 22.34 to stay on Madrid's coat-tails. 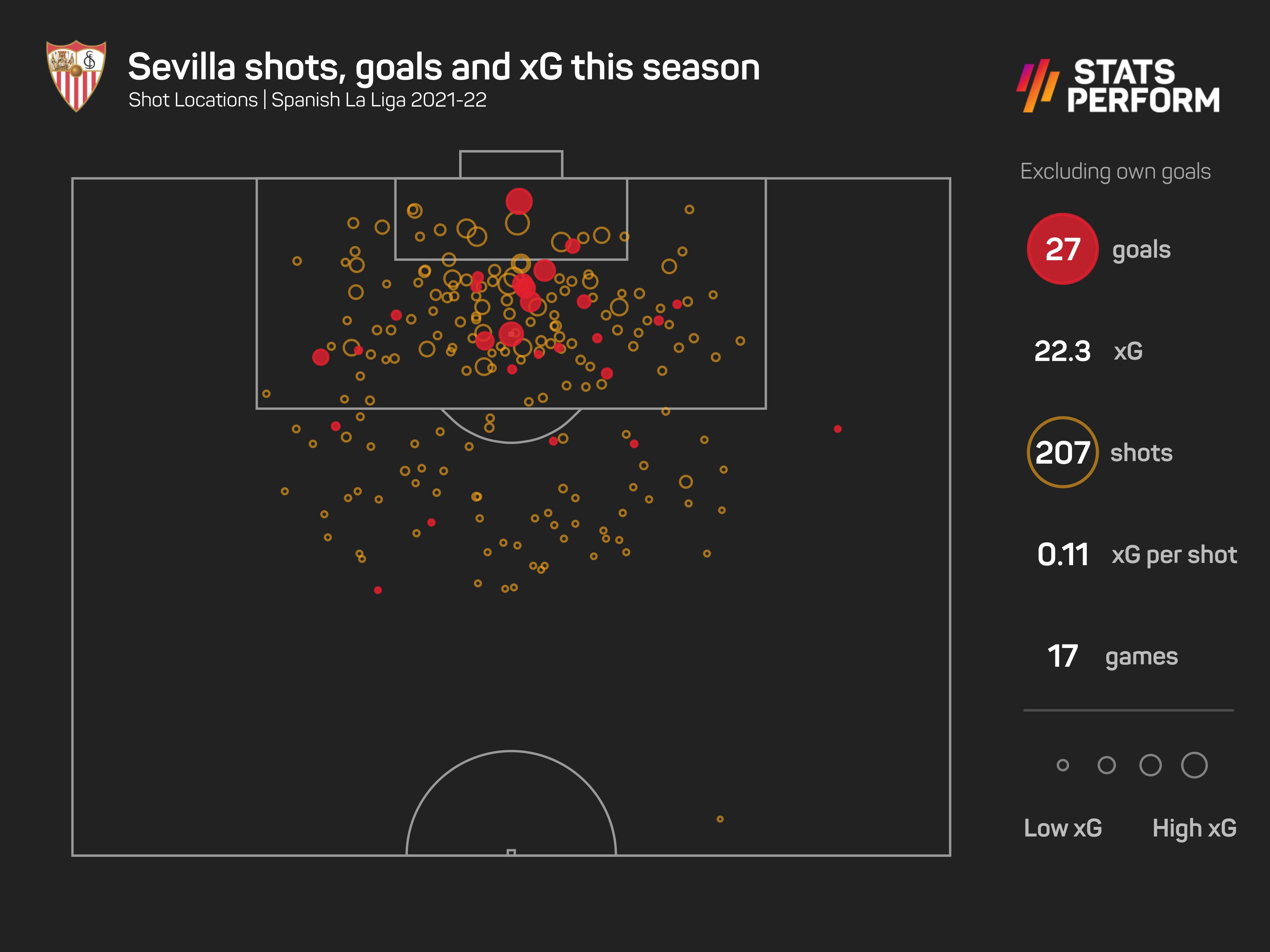 These teams like to have the ball, so something must give on Tuesday.

Barcelona have had 65.02 per cent of possession across their games this season, while Sevilla have had the ball 60.39 per cent of the time.

Injuries might be biting, but this is no time for searching for excuses, with Lopetegui insisting Barcelona's 3-2 win over Elche on Saturday did not fairly reflect the dominance of Xavi's team. Barcelona led the shot count 19-5 in that game, were 2.8 to 1 ahead on xG, and had 73.4 per cent of possession.

Lopetegui said: "You can see what Barcelona are looking for and they have the right players for that. They want the ball, they want width. They've got young, capable players, some of them start for Spain, while they've got top-class, experienced players. They have a lot of width, they're good at one-on-one situations, etc. Between the two areas we're going to have to do a lot of things right."