Liverpool ran out 3-0 winners over Crystal Palace on Saturday, to take their place at the top of the Premier League.

Title rivals Manchester City could only draw at home to Southampton, but Manchester United and Chelsea subsequently joined Liverpool on 13 points.

Here are some of the more curious facts from across the Premier League weekend.

It is the first time in the Premier League that a game has ended 3-0, with all three goals being scored by African players.

Mane opened the scoring with his 100th goal for Liverpool. The Senegal forward has now scored in each of his last nine league appearances against Palace, making him the first player in Premier League history to score in nine straight matches against a single side.

All three of Liverpool's goals came from corners. Not since City beat West Brom in March 2015 has a top-flight game ended 3-0 with all the goals coming from corners.

100 - Sadio Mané has scored his 100th goal for Liverpool in all competitions, 10 of which have come against Crystal Palace, his most against a single opponent for the Reds. Centurion. pic.twitter.com/gJ4x7qNl34

There was late drama aplenty at London Stadium on Sunday as United joined Liverpool at the top of the table thanks to a 2-1 win over West Ham.

After Cristiano Ronaldo continued his fantastic start to his second United stint to drag the Red Devils level, Jesse Lingard came on to break West Ham hearts late in the game.

London Stadium is the 66th different stadium that Ronaldo has scored at in matches played in Europe's big five leagues, and he has scored at more unique venues than any other player since his United debut in 2003-04, ahead of Zlatan Ibrahimovic (64).

But it was David de Gea who proved to be United's hero, as he saved a last-gasp penalty from Mark Noble, who was brought on specifically by David Moyes to take the spot-kick.

De Gea's save ended a drought stretching back to April 23, 2016 of 40 spot-kicks faced without making a save for both club and country, in the process helping United claim a dramatic win at London Stadium.

Of those penalties, 11 were scored by Villarreal players in May's Europa League final, with De Gea ultimately missing the decisive kick in the Red Devils' shoot-out defeat.

The 30-year-old did keep out a Jordan Ayew penalty in last September's league meeting with Palace, but that was retaken and scored by Wilfried Zaha after De Gea was deemed to be off his line. 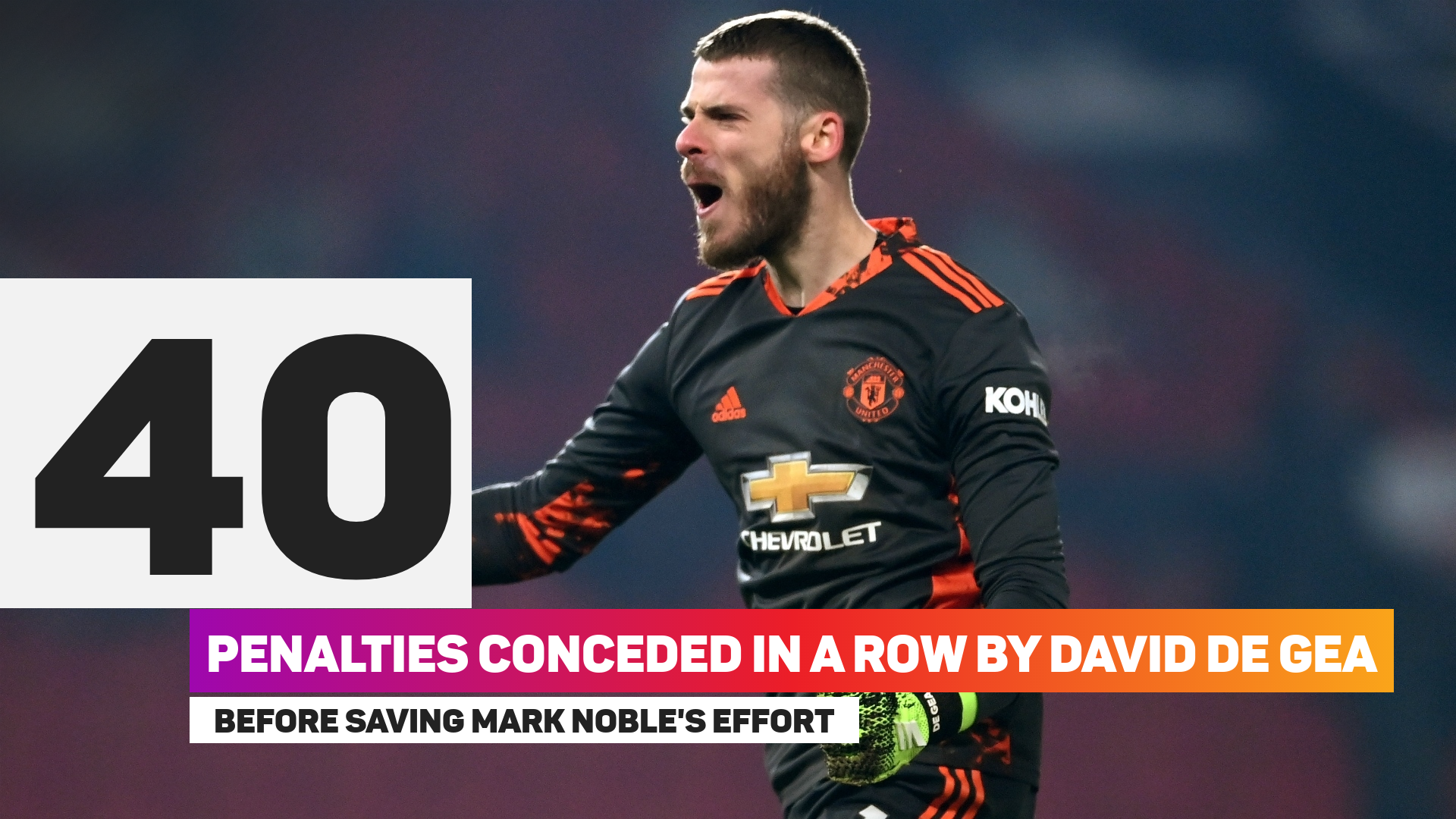 Aged 36 years and 362 days, Thiago Silva became the second-oldest Chelsea player to score in the Premier League behind only Didier Drogba, who scored against Leicester City aged 37 years and 49 days in April 2015, when the Brazilian headed Thomas Tuchel's side ahead at Tottenham.

N'Golo Kante's deflected effort made it 2-0. The midfielder scored for the first time in 49 league appearances, having last found the net against Man City in November 2019. Three of his last four top-flight strikes have come from outside of the box.

Antonio Rudiger condemned Spurs to a second successive 3-0 defeat; they have lost consecutive Premier League matches by a 3+ goal margin for the first time since their opening two games of the 2011-12 campaign.

Harry Kane, meanwhile, cut a forlorn figure up top for Nuno Espirito Santo's side. He has failed to score in his first four Premier League appearances of a season for the first time since 2015-16, attempting just four shots so far.

Everton's unbeaten start under Rafael Benitez came crashing to a halt as Leon Bailey starred with a blistering cameo in Aston Villa's 3-0 win.

Bailey came on from the bench and had an instant impact. With Matty Cash's first Premier League goal having put Villa ahead, the Jamaica forward whipped in a corner that Lucas Digne turned into his own net.

Digne has now scored three own goals in the Premier League, level with Younes Kaboul for the French player to have done so on the most occasions.

Villa were not finished there, however, and Bailey burst clear to lash home his first Premier League goal. Moments later, he went off with an apparent thigh injury, becoming only the second Villa player to come as a substitute, score, and then be substituted in a Premier League match, after Julian Joachim against Derby in September 2000.

2 - Leon Bailey is only the second Aston Villa player to come as a substitute, score, and then be substituted in a @premierleague match, after Julian Joachim against Derby in September 2000. Cameo. pic.twitter.com/sor1vSwvU8

Farke's losing streak rolls on, Toney at the top

Ivan Toney scored and assisted another as Brentford defeated Wolves 2-0 on Saturday.

Since the start of last season, Toney is the outright leading goalscorer in the top four tiers of English football (excluding play-off matches), with 33 strikes to his name.

Another promoted club, Norwich City, suffered their fifth defeat of the campaign. In total, the Canaries have now lost each of their last 15 Premier League games, meaning Daniel Farke is the manager with the longest losing run in top-flight history.

Mick McCarthy (14) was the last manager to go close to almost as long as Farke without a top-tier win, though that was back in 2005.

There is focus on the wicket as Australia prepare to take on India in the first Test in Nagpur.

Victor Osimhen is one of Europe's most wanted players after starring for Napoli, but the Serie A leaders are not looking to cash in.

Out of action since the Australian Open, Ons Jabeur will not play in either Qatar or the United Arab Emirates.

Michael Rechner has replaced Toni Tapalovic, the Bayern Munich goalkeeping coach who was a close ally of Manuel Neuer.

Kareem Abdul-Jabbar's long-time scoring record was passed by LeBron James on Tuesday in the latest achievement of a remarkable career.

Pellegrino Matarazzo was sacked by Stuttgart in October and has now been appointed by fellow Bundesliga strugglers Hoffenheim.

Kompany 'very sceptical' of those 'pointing fingers' at Man City

Manchester City face possible expulsion from the Premier League, though Vincent Kompany questioned the motives of the club's critics.

Christian Atsu was said to have been rescued on Tuesday, but Hatayspor still have not located the winger.

Wout Weghorst has one goal in six starts since joining Manchester United, but manager Erik ten Hag is not concerned.

Cody Gakpo has struggled since joining Liverpool, and Ronald Koeman fears he may have made the wrong decision to leave PSV so early.