'Little Maradona', Mainoo, Scalvini and the ones to watch in 2023

Stats Perform identifies eight players worth keeping an eye on in 2023, including a Spanish youngster compared to Diego Maradona.

With a new year upon us, it's only natural to look ahead at the next 12 months and the footballers who could enjoy breakthroughs at the top level.

From one player who bears a striking resemblance to Diego Maradona, to another hoping to follow in the footsteps of Erling Haaland, Stats Perform has identified eight youngsters who could be worth keeping an eye on in 2023.

It's been a difficult introduction to the Premier League for Bazunu. The Republic of Ireland international joined from Manchester City at the end of last season for a reported £12million, highlighting just how highly rated he is in the game.

But his 30 goals conceded (excluding own goals) have come from 21.3 expected goals on target (xGOT), which suggests Bazunu has been at fault for 8.7 goals this term – that's comfortably the worst such record in the Premier League.

Can he turn his season around and bolster Southampton's survival hopes? Bazunu has potential but is struggling to live up to it at the moment.

With Noussair Mazraoui moving on to Bayern Munich in pre-season, Rensch has been given greater exposure to first-team football, with his 12 Eredivisie starts already four more than in the 2021-22 campaign.

He's less of an obvious attacking threat than Mazraoui, but Rensch is an elegant player, as you might expect of an Ajax academy product, and quick.

Comfortable on the ball and versatile enough to play across the back four, Rensch is a very well-rounded defender with a big future. 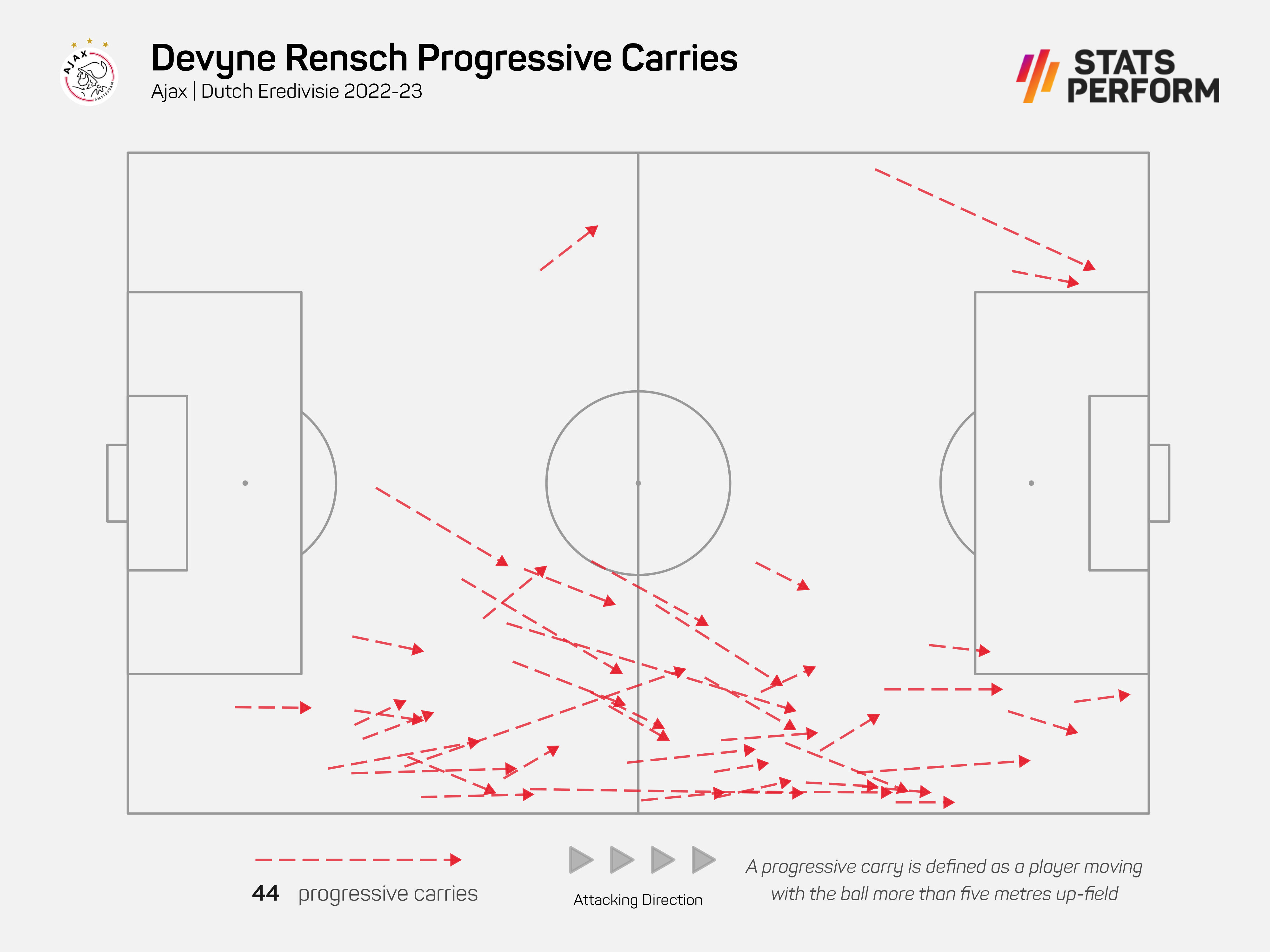 Scalvini broke into the Atalanta first-team picture in 2021 as a 17-year-old. Since then, he has progressed quickly and impressively, to the extent where the club are expected to cash in on him to a significant degree in 2023.

An imposing yet classy central defender, Scalvini is very much the archetypal modern centre-back in terms of how he operates, with his 22.9 forward passes per 90 minutes this season among the very best in his role in Serie A. 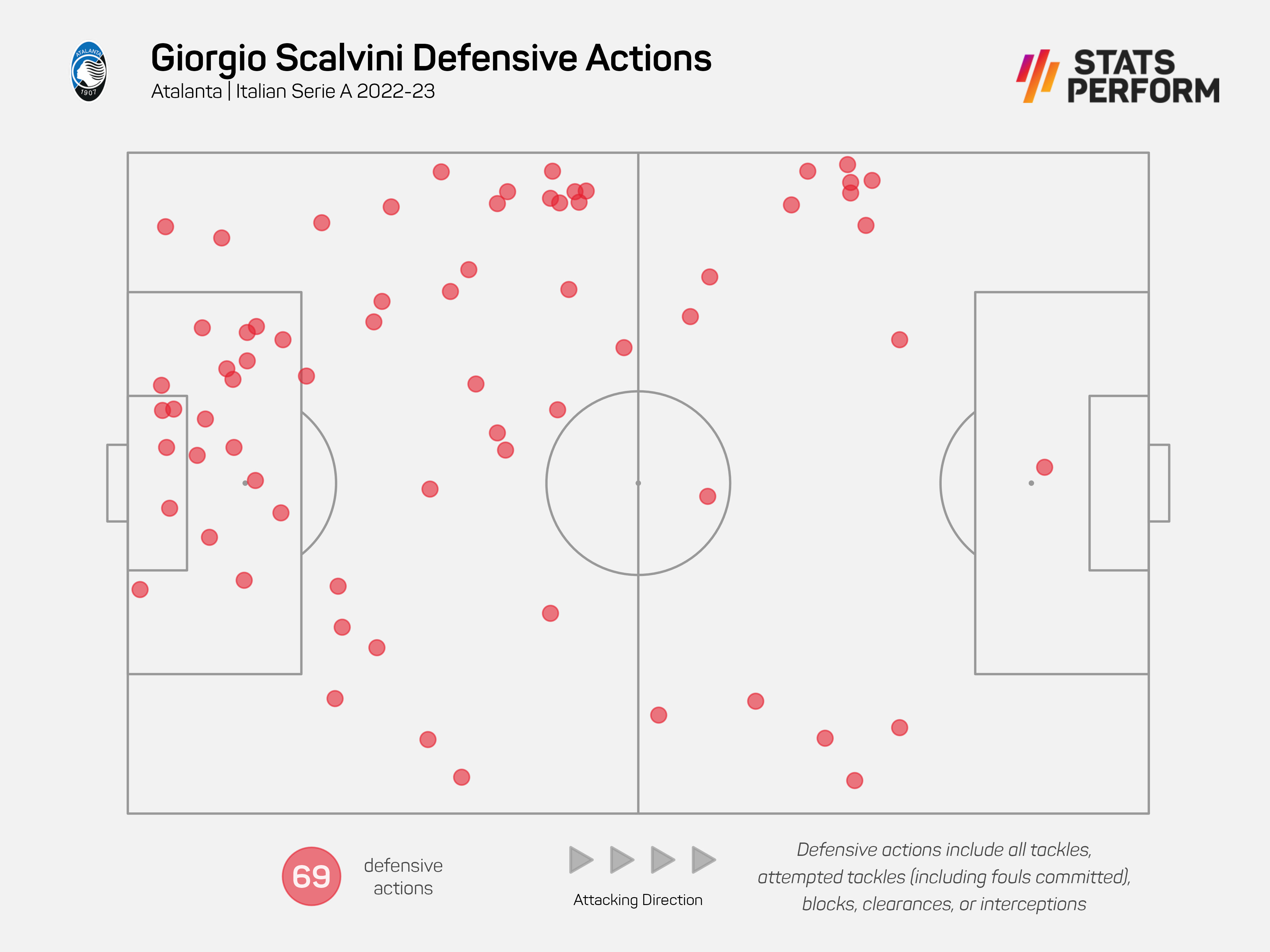 Also comfortable playing in midfield, Scalvini likes to defend on the front foot as highlighted by his 2.7 tackles per 90 minutes ranking highly among centre-backs as well.

Atalanta are reportedly expecting to fetch at least €40m for him over the next year, with Inter, Juventus, Tottenham and Manchester City all said to be admirers.

Mainoo looks to be one of the most talented players United have produced in a while. The teenager has caused a stir with his performances in the club's youth teams over the past few years, and that has recently led to an internal promotion.

A silky central midfielder, Mainoo was a key part of the United side that won the FA Youth Cup last season.

Given his technical ability, comparisons with Paul Pogba are to be expected, though the early signs suggest Mainoo may be able to offer the deep-lying playmaking qualities the Frenchman lacked.

He signed his first professional contract in May, was named on the bench for the second time this season in the Premier League during Saturday's win at Wolves, and featured prominently for United in the World Cup break after being promoted to the senior squad.

If there's any teenager in line to follow Alejandro Garnacho in establishing himself at Old Trafford, it's Mainoo.

The 18-year-old is still waiting for his first senior cap, but he's really making a name for himself in the Danish Superliga, with his dazzling dribbling abilities and eye for a goal causing defences no end of issues. 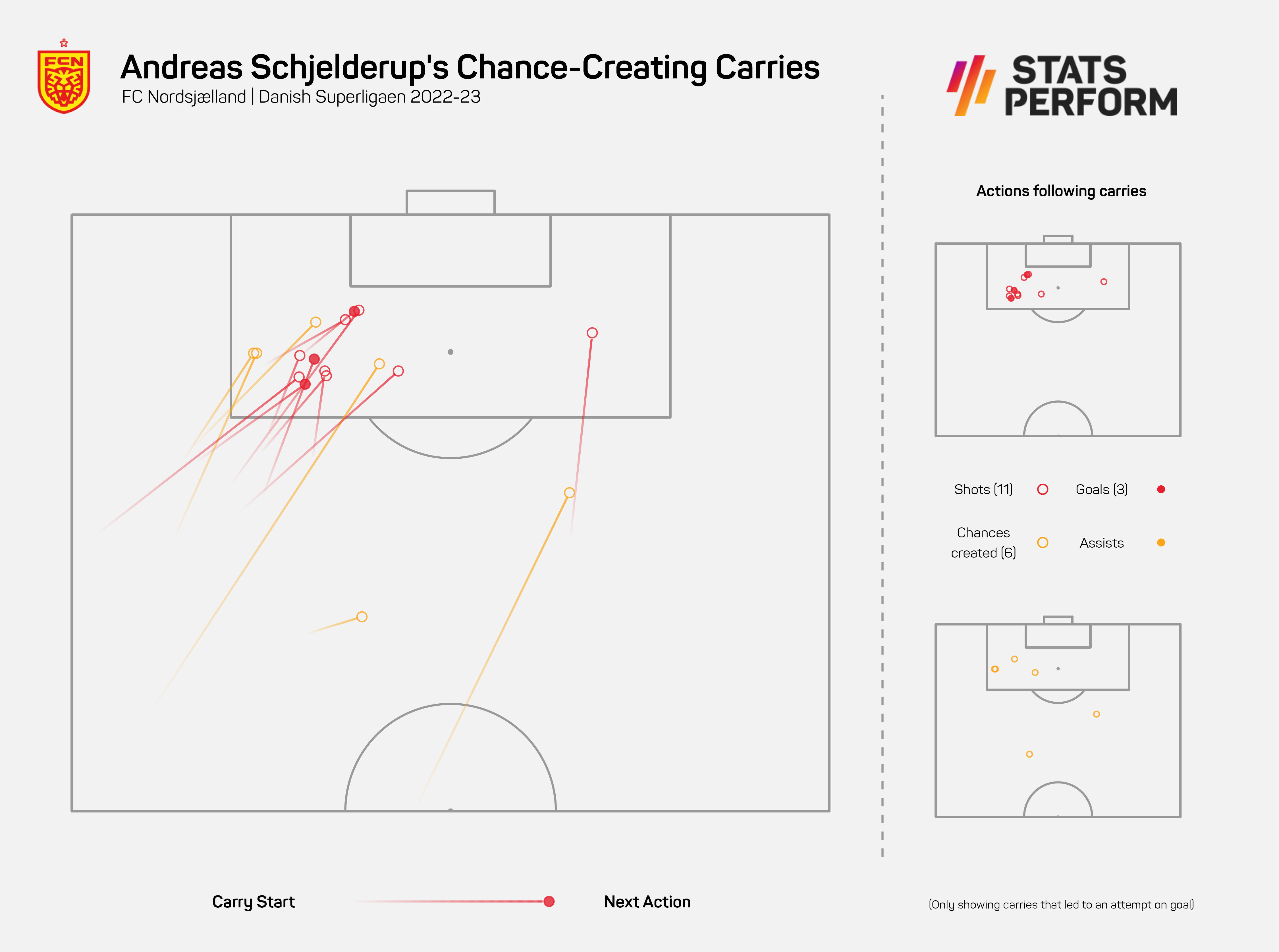 Schjelderup's 74 dribble attempts are the second-most in the league this season, while no one has bettered his 10 goals, with the teenager very effective coming in off the left flank on to his right foot.

Benfica are reportedly one of the clubs keen on him. Wherever he ends up, 2023 looks likely to be a breakthrough year for the youngster. 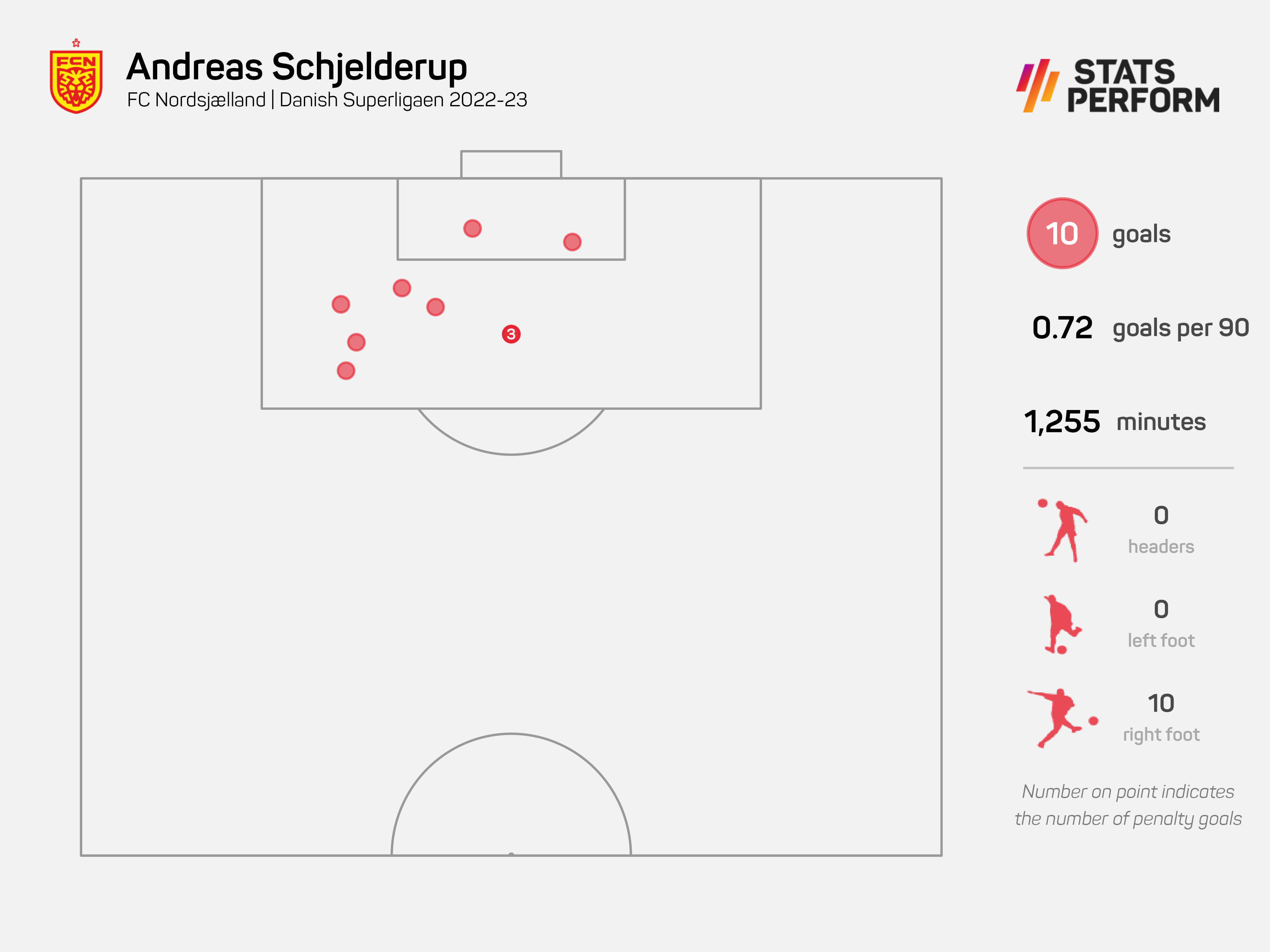 It takes just a few seconds to realise why Alvarez is compared to Maradona. The stature, his tucked-in jersey, the hair – then he gets on the ball and the realisation hits home even more.

Left-footed, blessed with exceptional dribbling abilities and a remarkably low centre of gravity, Alvarez looks to be the most naturally gifted player to come through Sevilla's academy since Jose Antonio Reyes, and probably beyond.

But the club have been very protective over him and his development, so much so that his 75 minutes against Juventud Torremolinos in the Copa del Rey last week were his first for the senior side.

He made his debut for their B team just a couple of weeks after his 16th birthday in August 2019, and finally it would appear his senior breakthrough has arrived, with Isco's departure certainly not hurting his cause. 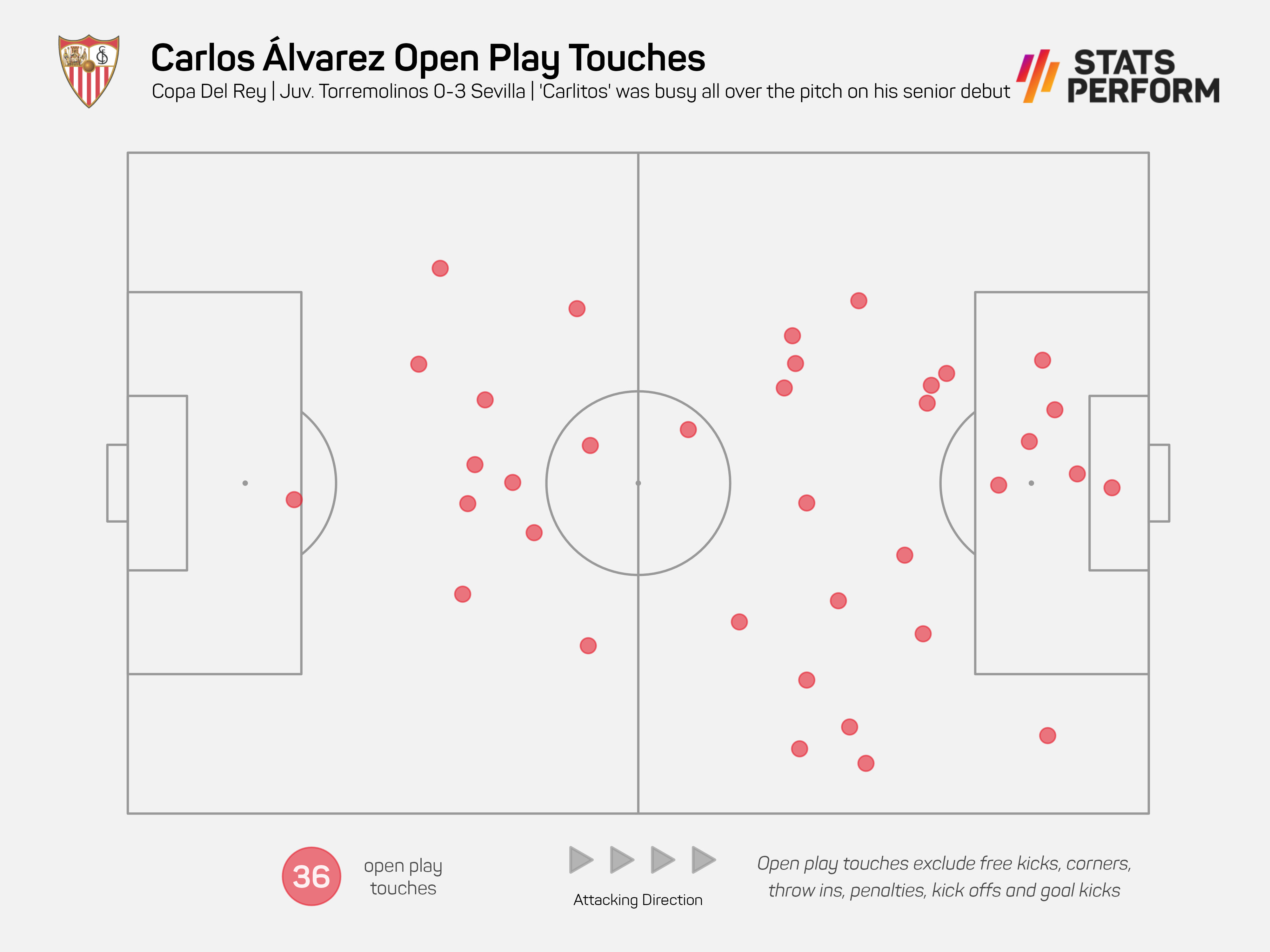 A gifted young midfielder who plays for Las Palmas – the 'new Pedri' tag is almost too obvious. Moleiro tends to operate in a more advanced role, though he is clearly similarly blessed.

Skilful and a talented dribbler, Moleiro is in his second season in Las Palmas' senior side and playing a key role in their promotion push.

He's yet to score a league goal this term, but Moleiro's creativity and bravery on the ball are real assets, with only two players in the Segunda bettering his 29 chances created in open play and just three tallying more than his 70 dribble attempts.

Perhaps unsurprisingly, Barcelona are said to be keeping tabs on him – but even if he doesn't earn a move away from the Canary Islands, it would appear there's a strong possibility he'll be in LaLiga anyway before the end of 2023 with Las Palmas top of the second tier. 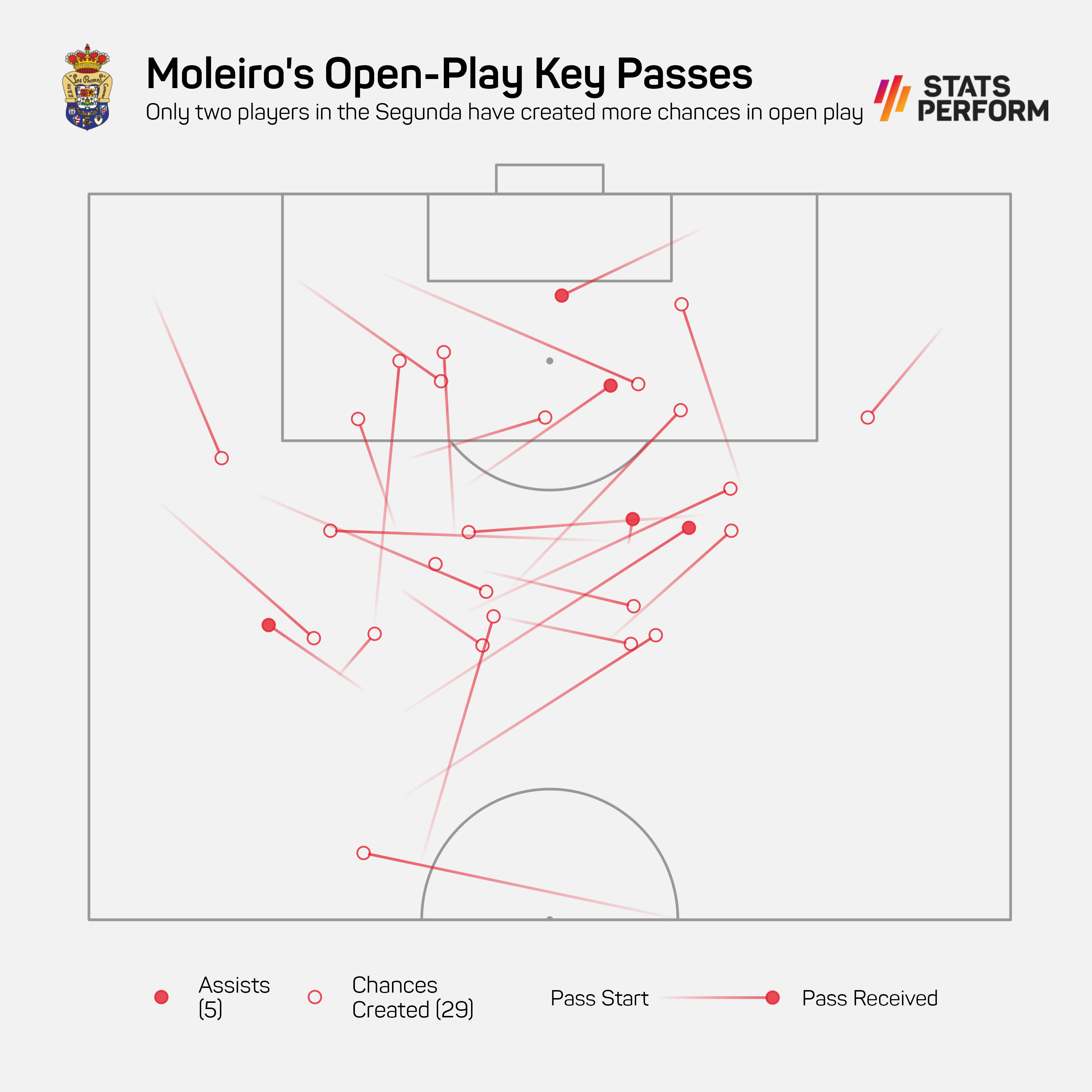 Salzburg's conveyor belt of striker talent has been impressive in recent years. First there was Haaland, then Karim Adeyemi, and Benjamin Sesko has already secured a big-money move to RB Leipzig for the end of the season.

Konate will hope to be the next.

Like Adeyemi and Sesko before him, Konate – a well-rounded forward who is excellent in the air – has been honing his skills at Salzburg's sister club Liefering in Austria's second tier this season, scoring 10 times in 14 league games.

He's also been featuring for Salzburg's Under-19s in the UEFA Youth League, with his five goals in six games bettered by only five players.

Konate probably won't get his chance in the senior side until next season, but with Salzburg Champions League regulars these days, he will be one to look out for.