Lionel Messi at 35: Could this be PSG and Argentina superstar's defining year?

Lionel Messi showed a different side to his game at PSG last season and, now 35, his defining moment in football may yet be still to come.

To suggest the next 12 months may well define Lionel Messi's career would be doing a disservice to what we have witnessed up close over the past 18 campaigns.

From boy wonder to the greatest player ever in the view of many, and now into a new chapter with Paris Saint-Germain, the Argentina forward has nothing to prove to anyone.

And yet on the day he turns 35 – the average age of retirement for a footballer – questions continue to be asked of Messi.

Will he win a World Cup – still in the eyes of many the real barometer of a truly great player, even in the era of the Champions League – before he retires?

Can he prove himself in a different country after a mixed first season in France? Both of those questions will be answered before he celebrates his 36th birthday in a year's time.

Stats Perform looks at how Messi's game has already changed, and whether he is still capable of inspiring club and country to glory in possibly the biggest year of his career.

Ten months have passed since the shock announcement that Messi was bringing an end to his 21-year association with Barcelona to join Ligue 1 giants PSG.

By his own high standards, Messi's first campaign in Paris was far from great. He scored 11 goals in 34 appearances, down on the 38 scored in his last season with Barca.

And those 11 goals came from an expected goals (xG) value of 16.8, meaning he scored 5.8 goals fewer than he should have based on the quality of his chances. 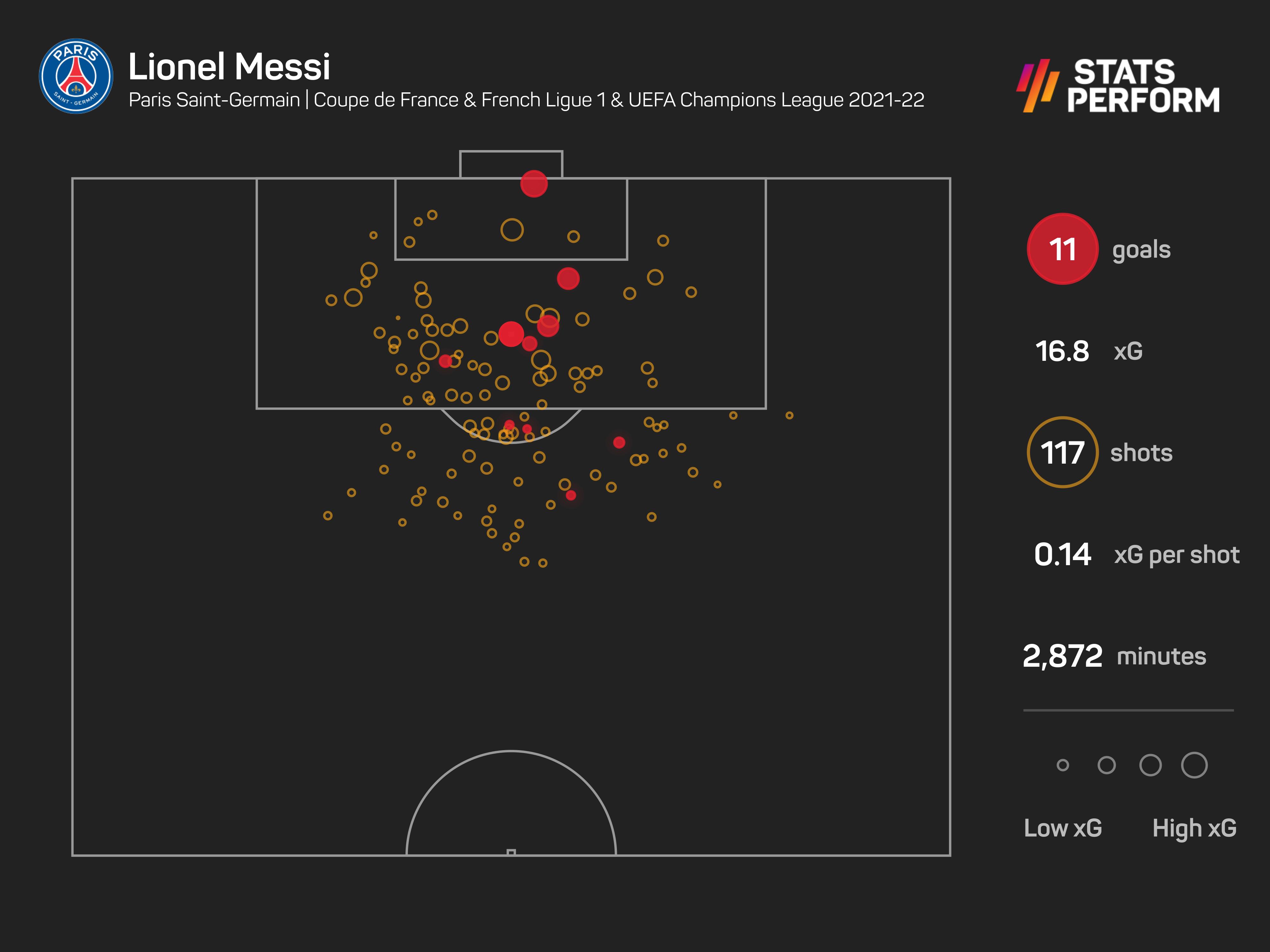 Among players in Europe's top-five leagues in all competitions last season, only six others had a worse return, with Lille striker Burak Yilmaz (8.11 differential) topping the list.

There were extenuating circumstances, of course, with Messi himself recently opening up on just how badly he struggled after testing positive for coronavirus in January.

The La Masia product also had to adapt to life outside the place he had called home for more than two decades, seeing him take on an entirely different role.

While his scoring figures dropped considerably, Messi set up 14 league goals – only once in his last five seasons at Camp Nou (21 in 2019-20) did he assist more in a campaign.

The majority of his assists last season came from a left-of-centre position outside the box, where he predominantly played alongside Neymar and just off Kylian Mbappe. 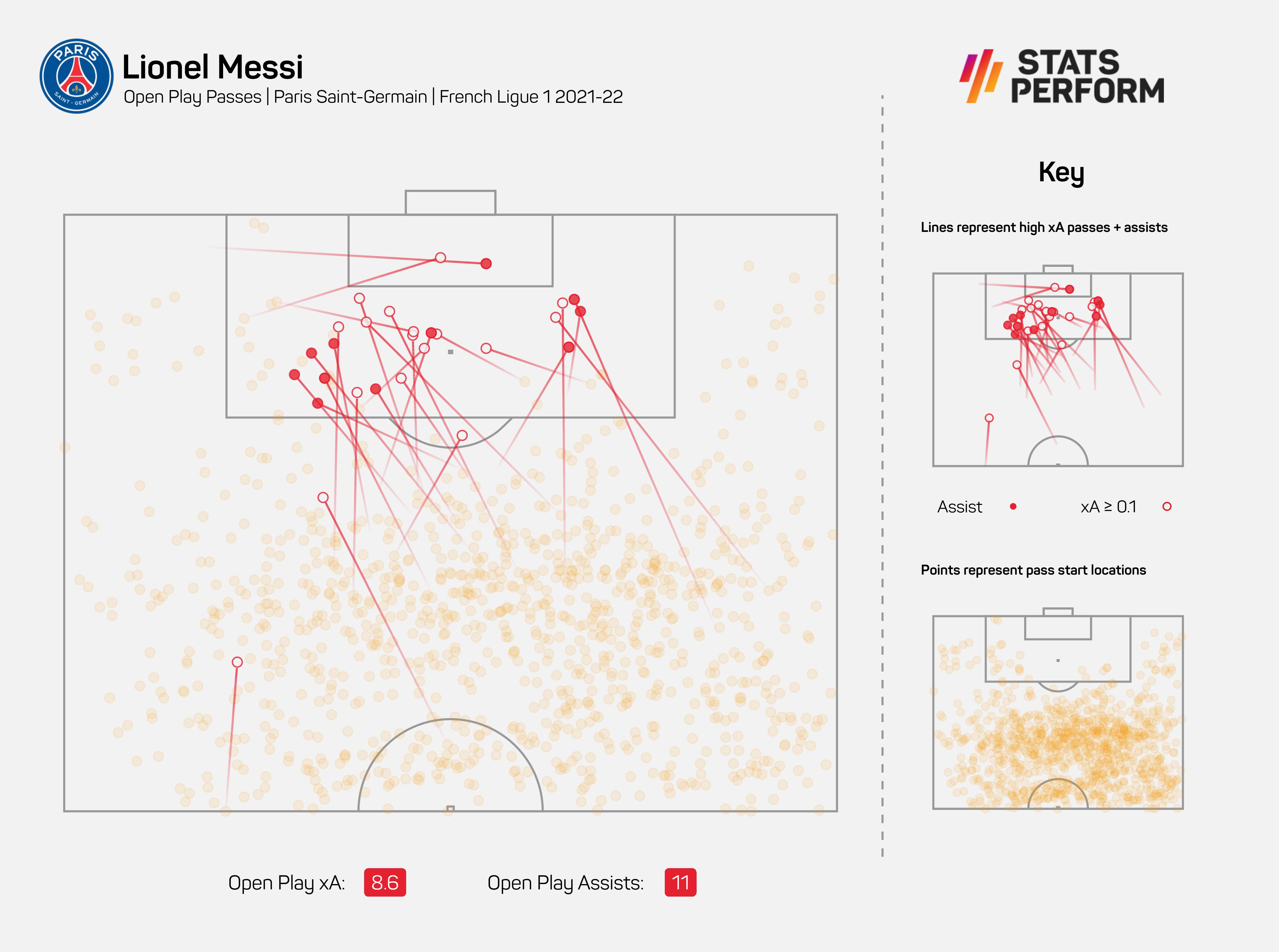 The 11 goals Messi scored at the age of 34 is his lowest return since the eight he netted when aged 18 and still in the infancy of his Barcelona career.

While that can be put down to a change of scenery, and being in the unfamiliar role of having to play second-fiddle to Mbappe, age is also surely a factor.

At 35 – or 34 as he was last season – Messi will inevitably have to rely more on his footballing brain than his legs to give him an advantage over opponents.

As showed by Cristiano Ronaldo, though, age is just a number when it comes to the very best, the Portugal star having scored 75 goals in 102 games since his 35th birthday.

Zlatan Ibrahimovic, four months shy of his 41st birthday, has scored an impressive 112 goals in 174 appearances since hitting 35, an age often perceived as being 'over the hill'. 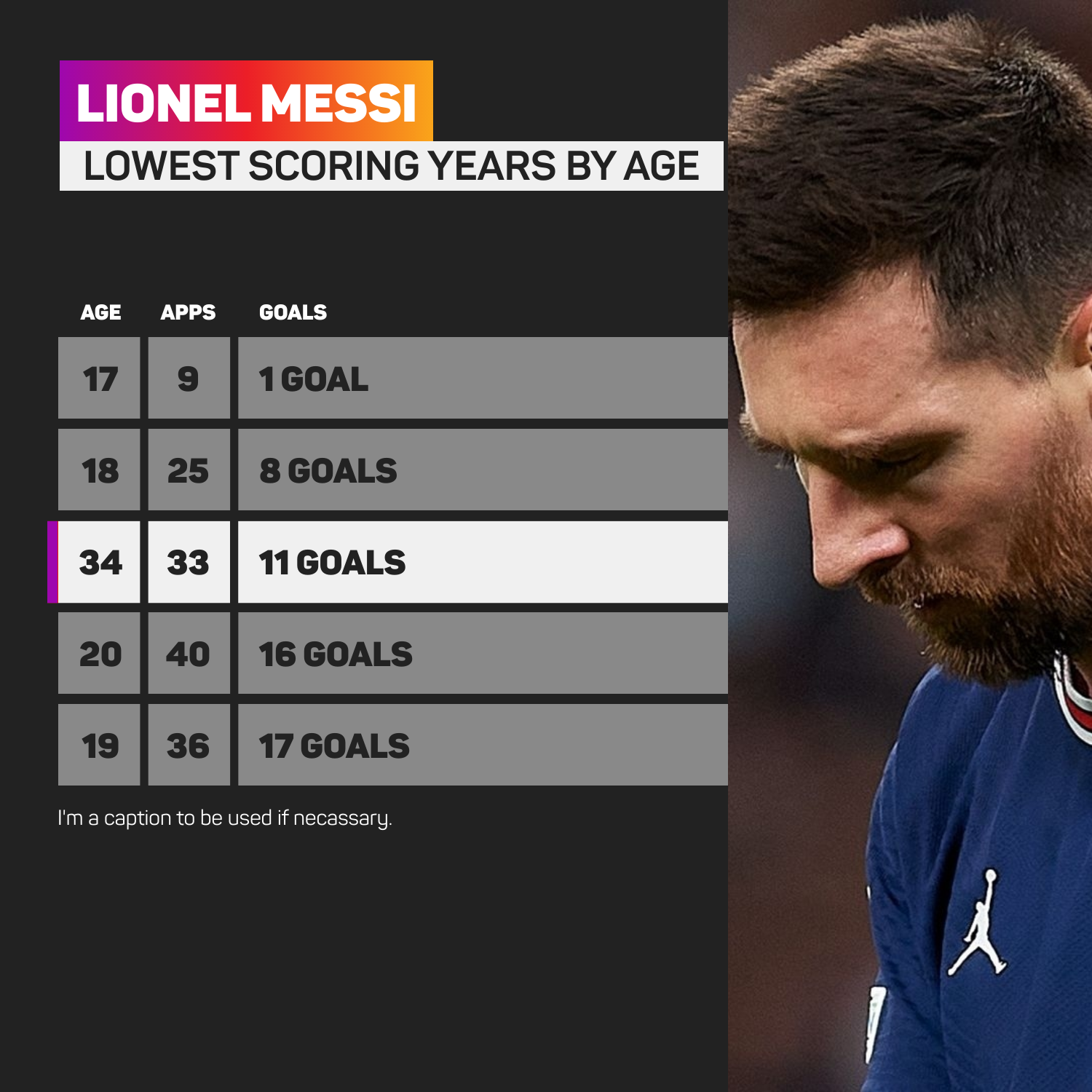 ALL EYES ON QATAR

Playing a supporting role may well be something we must come accustomed to when it comes to club level, but for Argentina Messi very much still remains the main man.

That was clear to see earlier this month when, in his final game in a gruelling campaign, Messi scored all five of Argentina's goals in their thumping friendly win over Estonia.

That five-goal showing rightly attracted plenty of focus, though it was arguably four days earlier in his side's 3-0 'Finalissima' victory over Italy that Messi truly showed his quality.

Messi pulled the strings from a slightly deeper position as Argentina, who also boast the likes of Lautaro Martinez, Angel Di Maria and Paulo Dybala, showed their credentials.

He assisted two of Argentina's three goals, including a delightful turn to leave Giovanni Di Lorenzo trailing in his wake before setting up Martinez for a simple finish.

On the back of ending their 28-year wait for silverware in 2021 with victory at the Copa America, Lionel Scaloni's men now look good value to challenge for the World Cup.

Regardless of any more titles he adds to his collection at PSG, Messi lifting the most famous trophy of them all in Qatar later this year would be the defining image of his career.

Different now he may be, but Messi has a chance to show in his 35th year that he has plenty more left in the tank to turn a great career into the greatest.