In light of Brighton’s 2-1 recent victory over Leicester, it’s worth taking a step back and remembering the situation Graham Potter’s side found themselves in after the corresponding fixture last season.

The last time Leicester visited the Amex, in March this year, they were the ones who ran out 2-1 winners. At that point, with 11 games of the campaign remaining, Brighton found themselves just three points clear of the relegation places.

And while few expected Brighton to be relegated over the final weeks, that was nevertheless the club’s primary objective for 2020-21: avoiding the drop. For all Potter’s impressive tactical decision-making and his team’s attractive football, Brighton were still candidates to go down.

So when looking at the Premier League table before the weekend's action, where Brighton proudly sat fourth, above champions Manchester City, Tottenham and Arsenal, it’s worth considering their position not in relation to the three sides at the top of the table, but the three at the bottom of it. Brighton were one point off the top but, maybe more pertinently, were already 10 points above the relegation zone.

The inevitable question is: Precisely what has changed since last season. The answer is: Not that much. And this is, inevitably, where the expected goal (xG) statistics come in.

You didn’t need xG last season to work out the obvious — Brighton often created lots of chances but wasted them. Their goals-for tally was considerably less impressive than it should have been. That was obvious from watching the Match Of The Day highlights every week.

Brighton had the third-biggest difference in the top flight between their goals tally and their xG tally on a per-game basis. The only two clubs with larger underperformance in front of goal were Fulham and Sheffield United, who both ended up relegated back to the Championship. 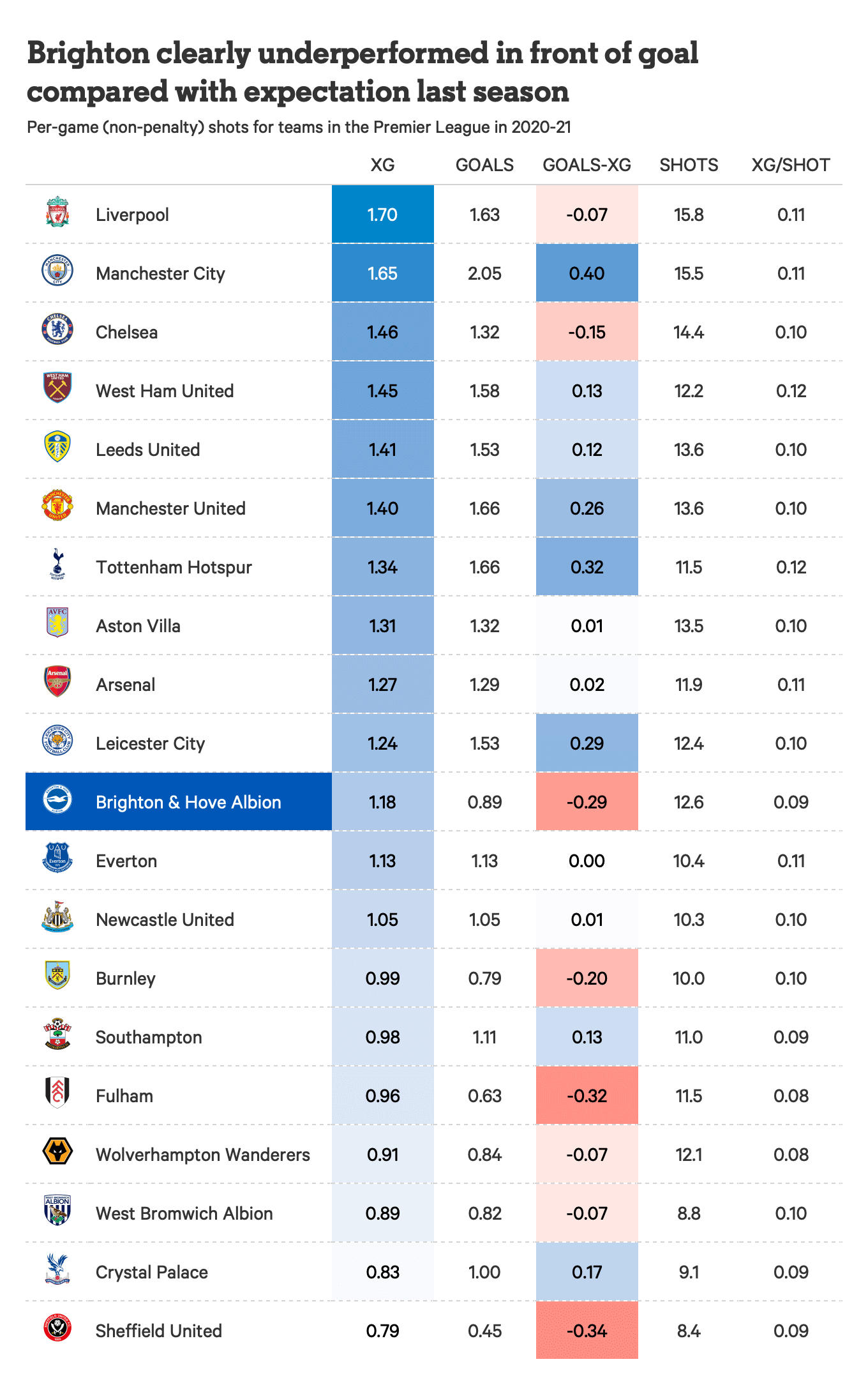 What received less attention was the fact the same thing was happening at the other end of the pitch.

Brighton had the third-best defensive record in xG terms — only Manchester City and Chelsea conceded lower quality chances on a per-game basis — but they also had the second-worst difference between xG and goals against, behind Southampton. 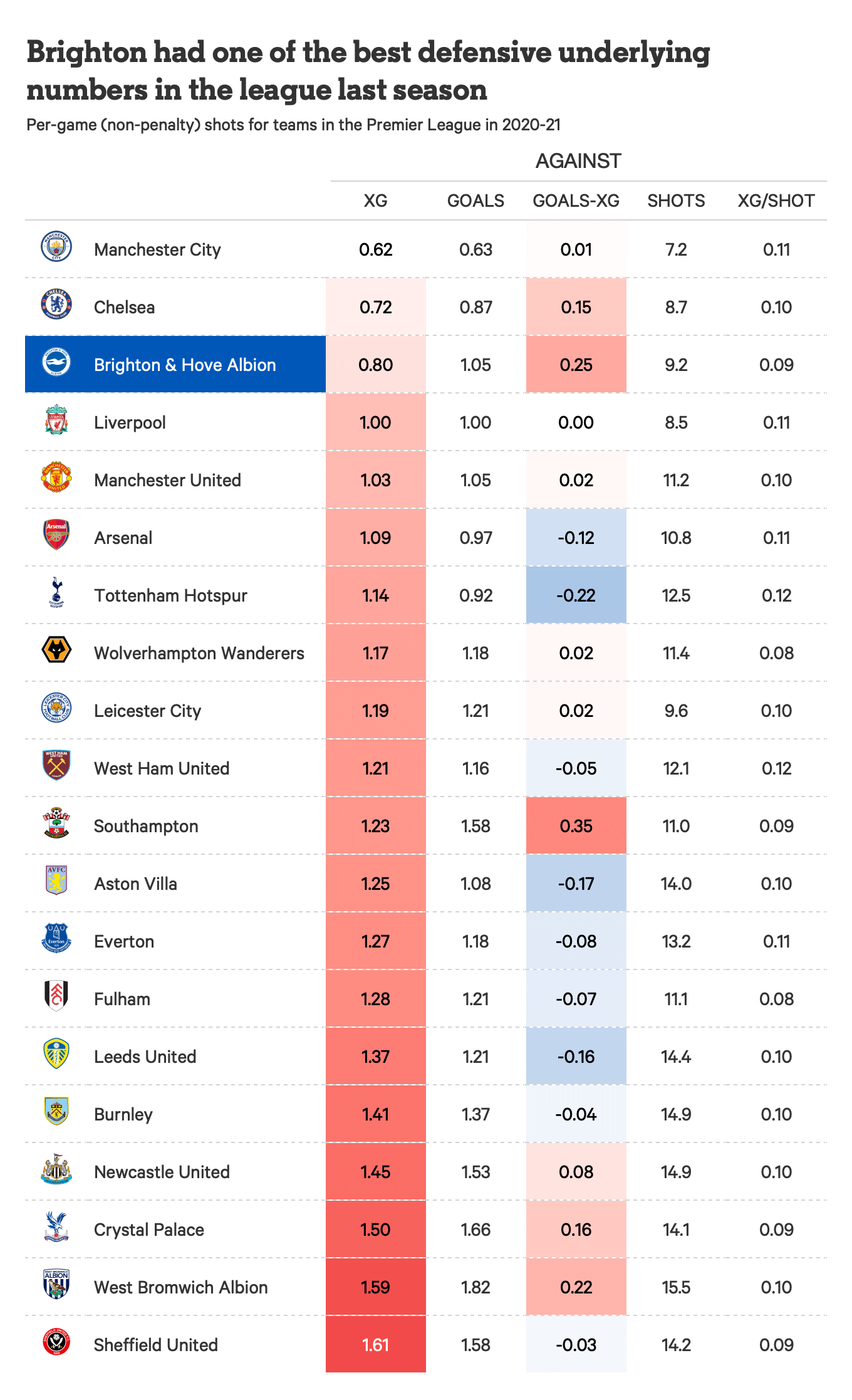 The general pattern is that xG differences like that are unsustainable and therefore a Brighton improvement was always likely. An improvement all the way up to fourth place after five games, however, is somewhat dramatic. And they haven’t just kept pace with their xG, they’ve exceeded it.

The graph below shows a 10-game rolling average of Brighton’s non-penalty xG vs actual goals scored over the last three years. It demonstrates that, since Potter took charge in the summer of 2019, Brighton have only outperformed their xG for a sustained period on three brief occasions, and none of them to the extent of their current run (which also takes into account the final five games of last season). 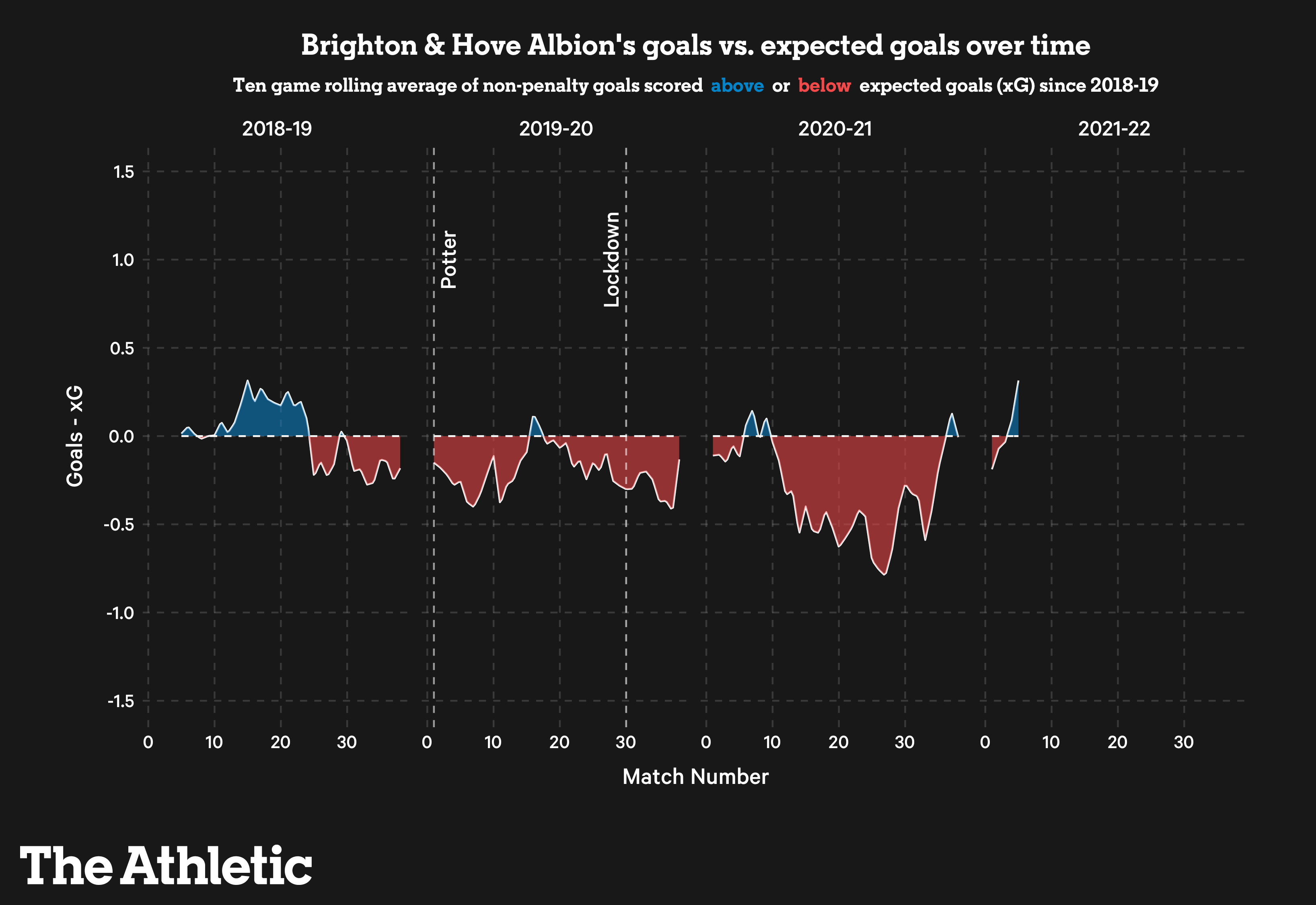 It is not as though Brighton have been playing a more attacking style this season, however. Albeit in a very small sample of games, they are averaging 11.2 non-penalty shots per 90 minutes so far — less last season’s per 90 average of 12.6.

In fact, Brighton’s underlying performance over the last 10 matches has been so unimpressive, in relative terms, that their expected goals against has crept up more than their expected goals — for the first time in a year. Brighton are now allowing chances of higher quality than they are creating across their most recent 10-game average. 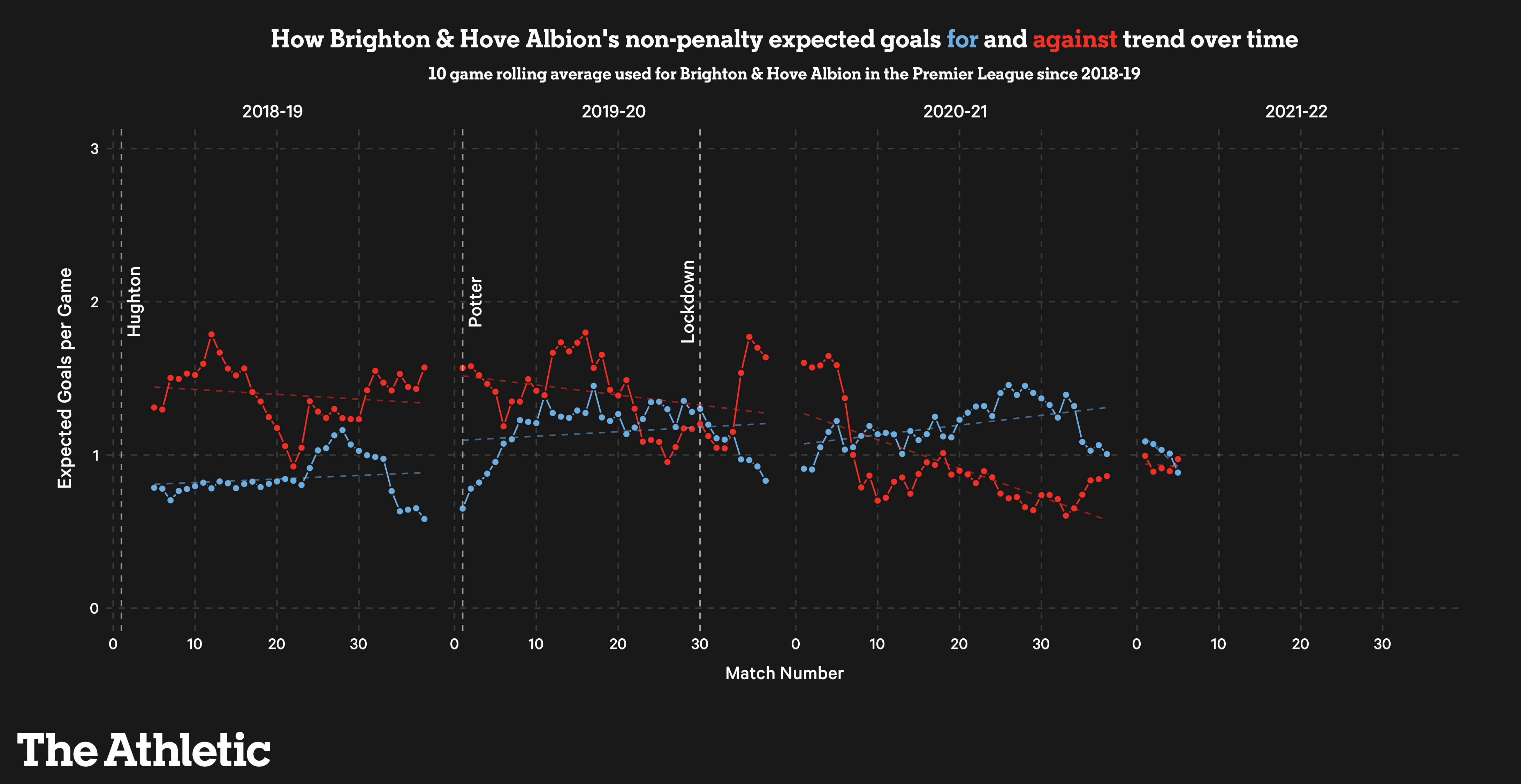 And that’s without even considering the fact that two-thirds of Brighton’s matches so far have been, on paper, against weak opponents: Burnley, the only team who finished below them last season and still survived, and the promoted duo of Brentford and Watford. Contests against Everton and Leicester have slightly balanced that out, but Brighton do not face any of last season’s top four until back-to-back fixtures against Manchester City and Liverpool at the end of October.

What Brighton have been doing is, essentially, more of the same.

Summer arrival Enock Mwepu started that season opener against Burnley but only lasted 45 minutes and hasn’t started in the league since. Marc Cucurella signed on deadline day and has provided natural width at left wing-back — he drove forward impressively in the first half against Leicester. Their only major summer departure, Ben White, has been replaced by Shane Duffy, who has returned from a season on loan at Scottish giants Celtic and is playing excellently.

Duffy has been a key part of one aspect Brighton have really excelled at: offensive set pieces.

Eleven of their 26 corners so far this season have led to a goalscoring chance; at 42 per cent, that is the highest ratio in the division. Duffy’s powerful header against Watford on the opening day was almost undefendable, while both goals against Leicester also came from set pieces — first when Duffy was the target for a corner, with Jannik Vestergaard punished for a handball, then when Danny Welbeck glanced home Leandro Trossard’s free kick.

While Brighton were arguably fortunate that Leicester had two late set-piece goals of their own disallowed for offside, we must also credit Potter’s defensive set-up.

The decision not to defend corners with men on the posts means Harvey Barnes was twice offside last Saturday, and correctly flagged twice. Whenever a side without players on posts concede from a corner, this is always highlighted as naive defending — but if those players had been there they would have been keeping Barnes onside, and we must recognise the value of playing in this manner.

Brighton have also excelled at winning the ball in advanced positions to help create chances.

That was notable for Neal Maupay’s goal against Watford, when Yves Bissouma closed down a pass from William Troost-Ekong then slipped his striker in, while Solly March was handed a good goalscoring opportunity against Leicester after Joel Veltman did something similar.

The statistics suggest Brighton are doing this regularly. According to Statsbomb data via FBref, they have the best rate of “successful pressures” in the Premier League, winning the ball back within five seconds 32 per cent of the time after they apply pressure (or roughly one in every three). Only Liverpool have pressured their opponents more often in the final third, and only Southampton and Chelsea have won more tackles in that area of the pitch.

For all the focus on Brighton’s patient possession play, set pieces and pressing are where Potter’s side have excelled so far. Add some unusually clinical finishing, and they have four league wins already. It took them until January 31, after 21 of the 38 matches, to do that last season.

“Football’s such a low-scoring game and the margins are so fine,” Brighton technical director Dan Ashworth told The Athletic. “When we played Brentford away, (Bryan) Mbeumo cuts inside Veltman, his shot goes just wide. Trossard cuts inside and his one goes in. We won that game 1-0; we could have lost that game 1-0.

“Leicester, those two offside goals might not go our way. I felt we had a bit of bad luck last season with VAR but we haven’t done anything drastically different. We believe in Graham and the processes, the recruitment, the training, everything we do, and it’s going for us at the moment.

“There were times last year it didn’t go for us and there will be times this season that it doesn’t go for us. That’s what happens in a relatively low-scoring sport, but we do believe in what we’re trying to do. We hope it gets us enough points to achieve our goals.”

Granted, this early run of form seems unlikely to last. But Brighton only need 30 more points from their remaining 33 games to record their highest ever Premier League points tally.

Potter’s ambitions, you suspect, will be somewhat loftier than that after this good start.

What is The Athletic? Every football story that matters. Get breaking news, exclusive stories and expert analysis from the best team of football writers ever assembled, all advert-free. Visit theathletic.com/astro to start your free trial.
#English Premier League#Brighton & Hove Albion

Brighton vs Crystal Palace postponed due to train strike

An upcoming Premier League match between Brighton & Hove Albion and Crystal Palace on September 17 has been postponed due to a planned strike by rail workers.

Astro has secured exclusive Premier League broadcast rights in Malaysia from 2022/23 to 2024/25.

Exclusively for Sports Pack customers, Astro will be giving away jerseys signed by Virgil Van Dijk, Marcus Rashford and Jorginho.

Arsenal finally got off the mark against Norwich and the tactical system they switched to offers hope for the rest of their season...

Astro to reward Sports Pack subscribers with prizes worth RM650,000

Ahead of the upcoming 2021/22 English Premier League season, Astro announced a special campaign for Sports Pack subscribers to win exciting prizes including a brand-new Proton Iriz.

Besides all the narratives, duels and battles that will be served up in the coming months, former Manchester United star Dimitar Berbatov is looking forward to the new Premier League season for a very specific reason — Marcelo Bielsa and the Leeds United juggernaut.

An assist and another dynamic performance against Senegal has got Gary Neville singing the praises of England midfielder Jude Bellingham.

Declan Rice believes England have been "faultless" in their last two World Cup matches, and does not feel they get the credit they deserve.

After failing to score in the group stage, Harry Kane is off the mark in Qatar and is setting his sights on France in the quarter-finals.

Ng Tze Yong ended his 2022 season with a title in the bag after the Malaysian clinched the Bahrain International Challenge men's singles title.

Despite the fact he will be 37 by the 2026 edition, Robert Lewandowski would not be opposed to another World Cup adventure with Poland.

Raheem Sterling was absent from England's squad for their World Cup win against Senegal on Sunday, as he returned to support his family.

In nearly an identical result to the 2021 edition, Viktor Hovland edged Scottie Scheffler for the Hero World Challenge crown.

Bellingham can be best midfielder in the world, says England team-mate Foden

Another assured performance from Jude Bellingham at the heart of England's midfield has Phil Foden waxing lyrical about his prowess.

England captain Harry Kane was among the scorers in Sunday's win over Senegal to set another Three Lions record.