Brighton and Hove Albion ruined Erik ten Hag's start to life at Manchester United by securing their first ever win at Old Trafford.

Adam Lallana has revealed part of Brighton and Hove Albion's plan in their opening weekend victory at Manchester United was to target new arrival Lisandro Martinez.

Graham Potter's side got their Premier League campaign underway with their first ever win at Old Trafford, with the former England international a key figure to his team's 2-1 success on Sunday.

The introduction in the second half of Cristiano Ronaldo by new United manager Erik ten Hag was not enough for the hosts, as Pascal Gross' two first-half goals proved enough to see off an Alexis Mac Allister own goal.

Martinez made his debut from the start following his pre-season move from Ajax, and the Argentine's partnership with Harry Maguire was put to the test early on by the movement of the visitors.

Speaking to Sky Sports' Melissa Reddy after the win, Lallana said it had been part of the plan to try and unsettle Martinez as he was new to the league.

"[The plan was] to have a lot of courage," the former Liverpool man revealed. "We had a shape, we had triggers. Me and [Danny Welbeck] have a lot of experience in the final third.

"We went a little bit more direct because we knew United had been pressing well in pre-season, obviously with new ideas from the manager, and I thought Wells caused them problems all game.

"With their new signing [Martinez], we know the Premier League's difficult, so we thought we'd ask him questions early on. We landed on second balls, gained good territory and attacked the ball well in numbers. Something we've spoken about is getting across the front post and Pascal got the finishes." 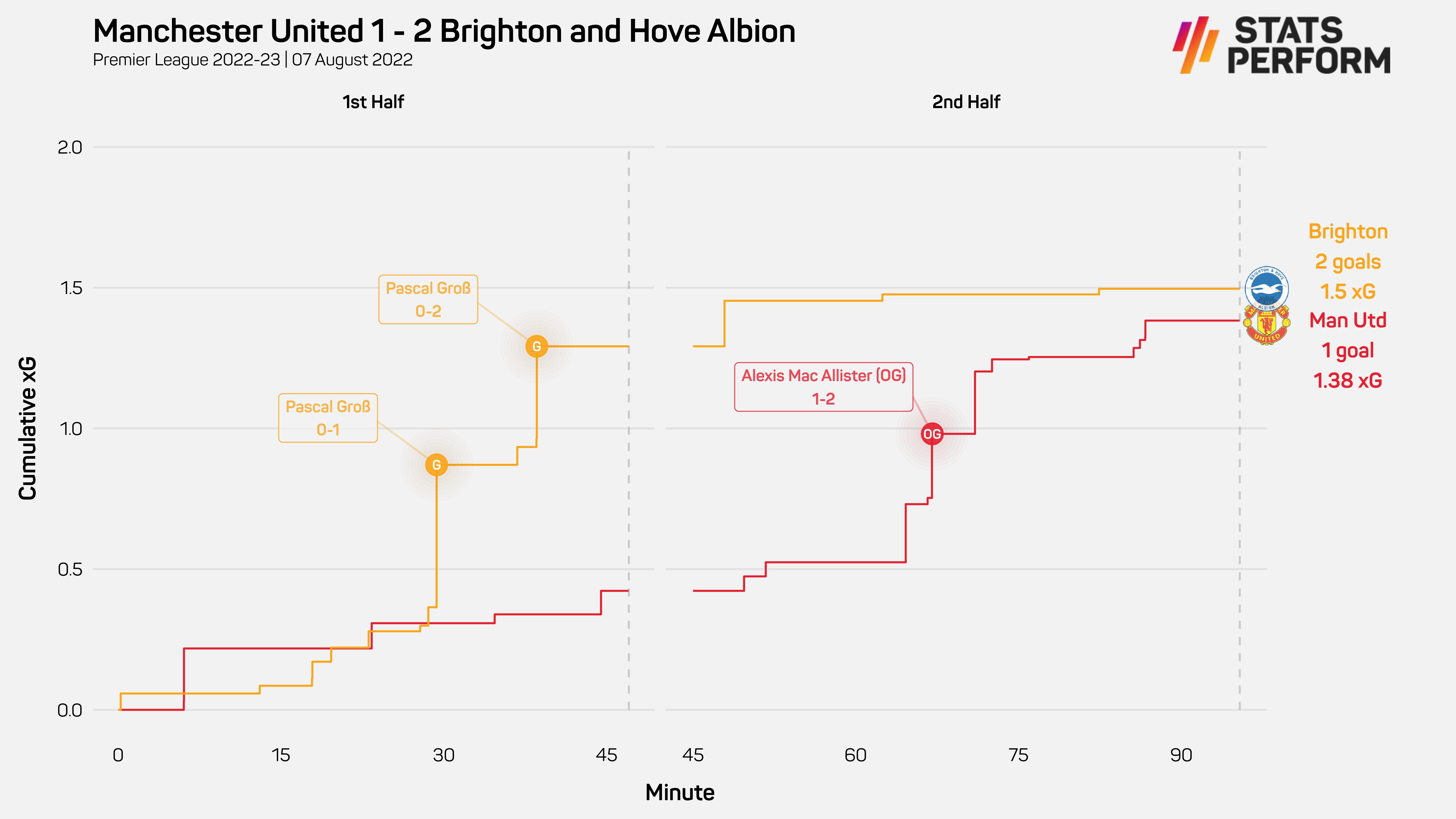 Ronaldo was left on the bench initially by Ten Hag, having only featured for 45 minutes of pre-season due to personal reasons, though there had also been frequent speculation suggesting he wishes to leave for a Champions League club.

His introduction early in the second half led to a change of shape, with another United debutant, Christian Eriksen, moving from a false nine position into midfield.

Lallana credited Potter with "taking the sting" out of the game, while also bemoaning some refereeing decisions that went against them, including a push from Martinez on Welbeck in the penalty area that was deemed fair by the officials.

"We knew they were going to react tactically or with personnel," he said. "We played the second half knowing it wasn't going to be the same [as the first], but we weathered the storm.

"I thought there were a couple of decisions that didn't go our way. We had a penalty chance, a couple of fouls that the ref let go, but we made good subs at good times. I thought the manager just took the sting out of the game and we shored the game up brilliantly in the last five or 10 minutes.

"It was a huge positive and good game management."