Liverpool could go into the final game of the season with Diogo Jota available to help them potentially secure Champions League football.

Diogo Jota has a small chance of returning from a foot injury to feature in Liverpool's final game of the season, meaning he should be available for Portugal's Euro 2020 campaign.

Jota had been expected to miss both of Liverpool's two remaining fixtures against Burnley and Crystal Palace because of an issue sustained in the 4-2 win at Manchester United last Thursday.

However, the club have since done additional scans on the injury, which have given Liverpool hope he could be available in a fixture that may well decide if they are playing Champions League football next season.

Liverpool narrowed the gap to fourth-placed Chelsea to a point courtesy of their dramatic 2-1 win at relegated West Brom on Sunday, secured through goalkeeper Alisson's remarkable last-minute header.

"Diogo, the swelling went down, we did another picture and it looked better than in the first scan. With the CT [scan] you could see it better," manager Jurgen Klopp told a media conference ahead of Wednesday's trip to Turf Moor.

"It's a tiny, tiny little chance for the weekend. It depends on how he improves now, we have to see that.

"It's good news obviously for Portugal and for Diogo himself with the Euros as they are not in danger at all. If it's good enough for us, we will see."

Having initially made an excellent start to his Liverpool career following a transfer from Wolves reportedly worth up to £45million, Jota has seen his debut season at Anfield disrupted by injuries.

A knee problem suffered in early December sidelined him for close to three months, but his value to the Reds when he has been on the field is clear. 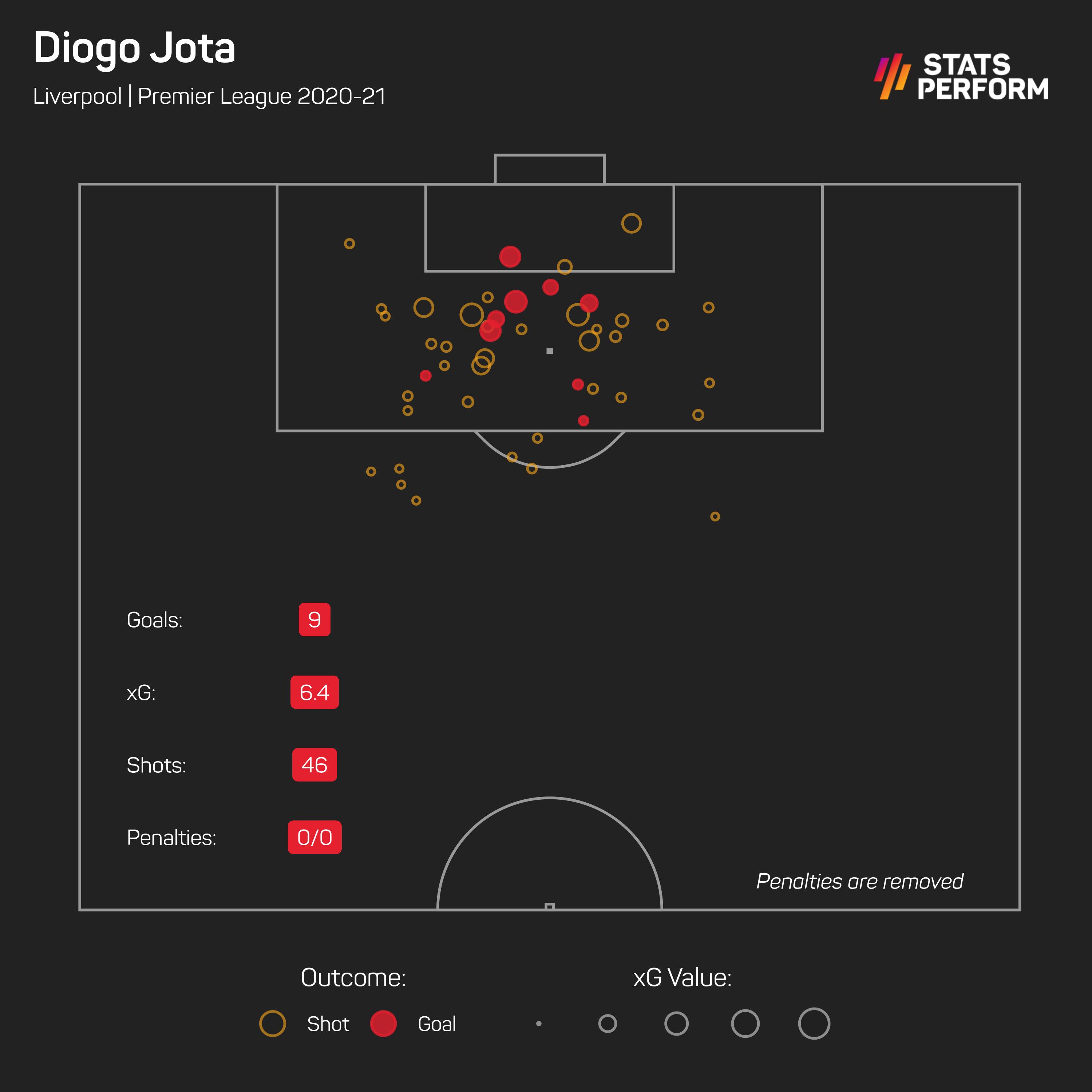 He has nine goals for Liverpool in 18 Premier League appearances, 12 of which have been starts, outperforming an xG of 6.4 from 46 shots.

That cutting edge could be telling against Palace if Liverpool are still in a position to clinch fourth place and Champions League football going into the final game of the season.

Meanwhile, James Milner is back in training having missed the games with Southampton, United and West Brom, and Alex Oxlade-Chamberlain is set to return from an illness.

Naby Keita is unavailable, however, with Klopp adding: "Millie will train today but is that then enough for being involved tomorrow? I will see.

"Ox was ill, [so] yes, Ox is back. Naby wasn't part of team training yet so that will not be enough until tomorrow for sure. Ox was in team training so he is back."

Defender Ozan Kabak, a January loan signing from Schalke, is out for the remainder of the season and may have played his last Liverpool game.

Rumour Has It: Tottenham's Kane willing to move abroad amid PSG links

Harry Kane could reunite with ex-Tottenham manager Mauricio Pochettino in Paris, according to a report.

Buffon, Robben, Riquelme and the stars who went back to retire at their first club

Following Gianluigi Buffon's decision to return to Parma, we looked at other players who returned to their first club.

Champions Manchester City are away to Tottenham on the Premier League's opening weekend. Man Utd host Leeds and Arsenal are at Brentford.

Youri Tielemans would not be drawn on his club future, instead insisting his focus right now is on Euro 2020 with Belgium.

Adrian says he is 'privileged' to stay with Liverpool having signed a contract extension with the Reds.

Ligue 1 giants Paris Saint-Germain are reportedly not giving up on signing Achraf Hakimi.

Paris Saint-Germain leapt ahead of Barcelona in the queue to sign Georginio Wijnaldum, who is now focused on the Netherlands.

Sergio Ramos had been expected to leave Real Madrid, then re-sign with Los Blancos, with Sevilla now joining the chase.

Red Bull secured a superb strategic win for Max Verstappen at the French Grand Prix, but Mercedes felt helpless due to tyre trouble.

After sitting out a game due to suspension, Marko Arnautovic's return boosts Austria's hopes of finishing behind the Netherlands.

Liudmila Samsonova capped a breakthrough week on the WTA Tour with a victory over Belinda Bencic in the bett1open final on Sunday.

At the third time of asking, Ons Jabeur claimed her first WTA Tour singles title with a win over Daria Kasatkina in Birmingham on Sunday.

An anti-LGBTQ banner was unveiled during Hungary's game with Portugal and UEFA is investigating events at the national stadium in Budapest.

Queen's crown for Berrettini as Italian lays down Wimbledon marker

Matteo Berrettini is looking forward to Wimbledon with plenty of confidence after landing his first title at ATP 500 level.