Joao Felix: Time for Atleti's starboy to have his big Champions League moment

It has taken Joao Felix some time to find his best form at Atletico Madrid, but it finally seems to have clicked.

Joao Felix was one of the brightest prospects in world football when he burst onto the scene with Benfica.

Atletico Madrid had to shell out of one the biggest ever transfer fees to land such a big up-and-coming talent.

Atleti paid Benfica a club-record fee of €126million to bring Joao Felix, then 19, to the Wanda Metropolitano, making the forward the fourth-most expensive footballer of all time.

Antonie Griezmann's move to Barcelona provided Atleti with the funds for such a transfer, though it would be safe to say neither of those players hit the heights that might have been expected.

Indeed, Griezmann is now back at Atleti and playing alongside the man who was brought in to replace him. For Joao Felix it has been a slow burn, but he now appears to be playing at the highest level he has achieved since his move to the Spanish capital.

Manchester City visit the Wanda Metropolitano on Wednesday with a place in the Champions League semi-finals up for grabs and, though the Premier League leaders hold a 1-0 advantage, it is all to play for.

Joao Felix may just prove to be the decisive figure. 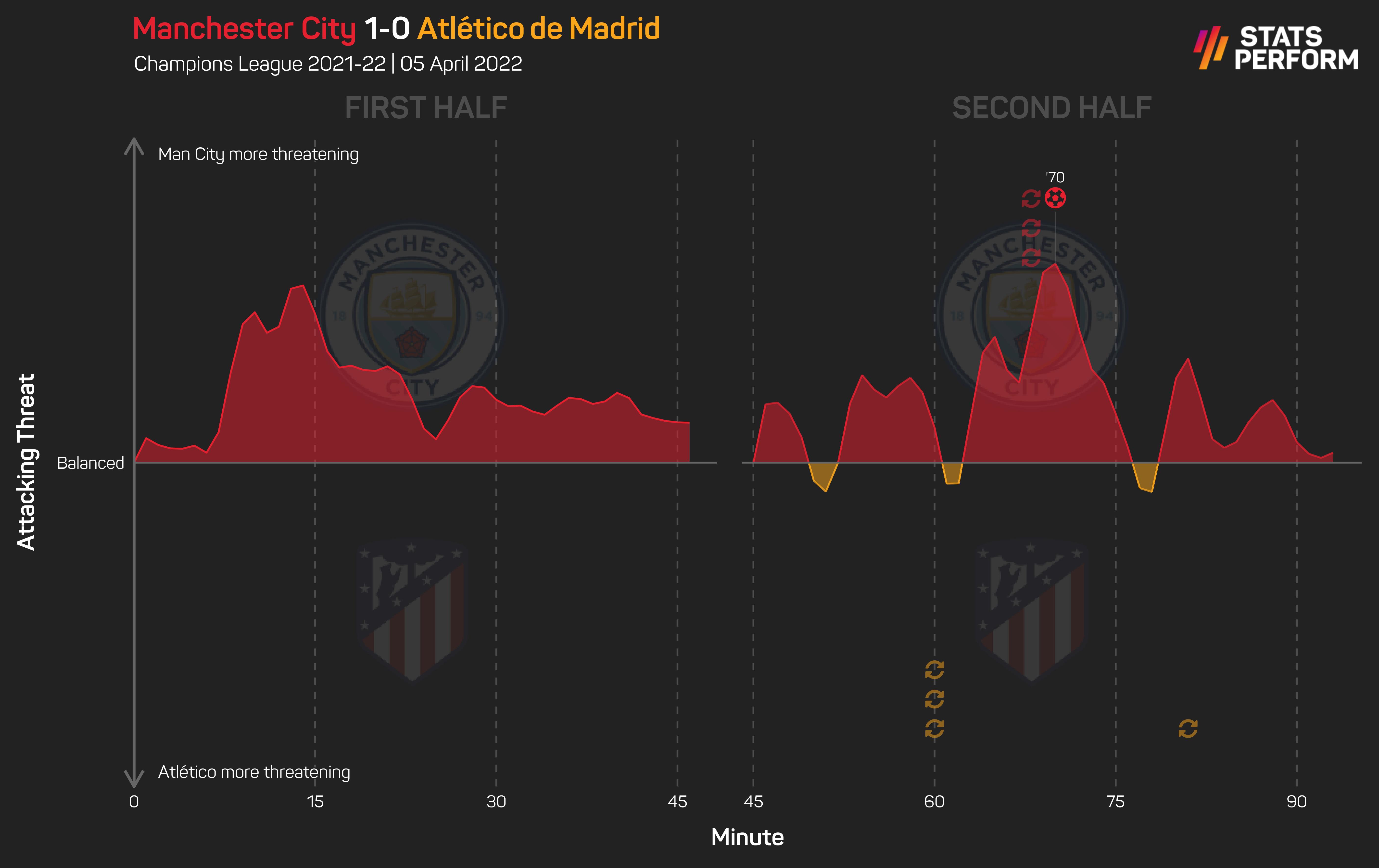 Yet, Simeone is hardly renowned for nurturing flair players who thrive at being able to roam the final third; scoring, creating and producing those moments that live long in the memory.

Joao Felix certainly falls into that category of player and it is hard not to imagine just how exciting the Portugal forward – who also plays for a more conservative coach at international level in Fernando Santos – might have been under, for example, Pep Guardiola.

Having scored 20 goals for Benfica across all competitions in the 2018-19 season, he managed just nine from 36 appearances in his first campaign at Atleti, averaging one every 276 minutes.

It was by no means bad for a young player finding his feet for one of Europe's top teams, and one of the most defensive of the elite sides, but living up to such a price tag was always going to be difficult. Until now, perhaps.

Joao Felix has scored 10 goals and assisted a further five this season in all competitions, already matching the tallies from last season. Ten of those 15 goal involvements have come in his past 12 appearances (seven goals, three assists), as many as in his previous 47 games for the club. 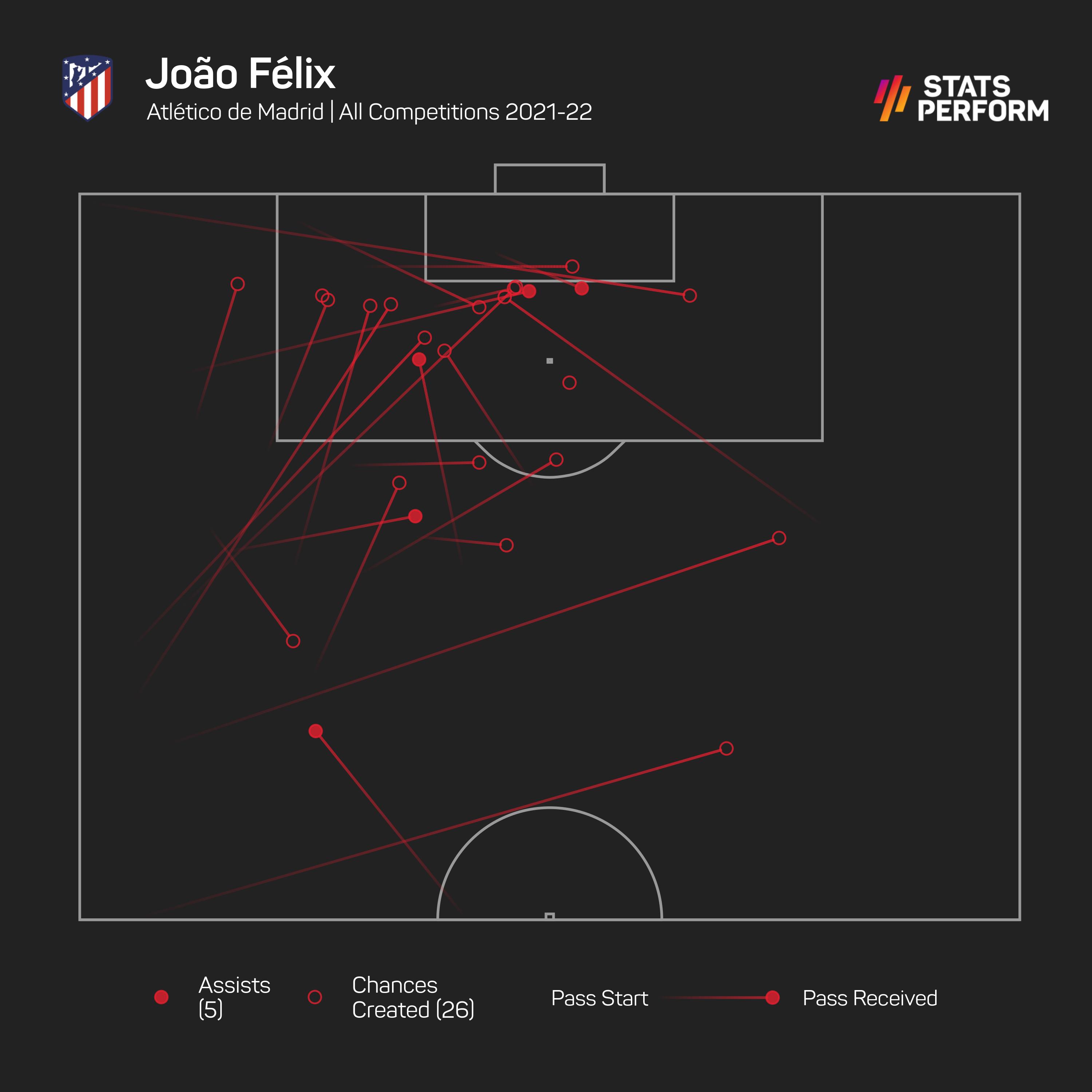 Yet despite being in such a rich vein of form, having scored a double against Deportivo Alaves ahead of Atleti's trip to Manchester last week, his first job at the Etihad Stadium was to defend.

Atleti failed to register a shot in the first leg, making them the first side since APOEL Nicosia (versus Real Madrid in March 2012) to fail to record a single shot in a Champions League match. It was very nearly the perfect defensive showing; only Phil Foden's sublime pass and Kevin De Bruyne's neat finish punctured Atleti's resolve.

Key to Simeone's plan was the work of Joao Felix and Griezmann, who has been directly involved in 67 per cent of Atleti's Champions League goals this season (6/9 – the highest ratio of any player for his team among the eight quarter-finalists).

Given Atleti only had 29.5 per cent possession, Joao Felix spent much of his time on the ball in what would normally be the space filled by the left-back, and only one of his 34 touches came inside City's area. 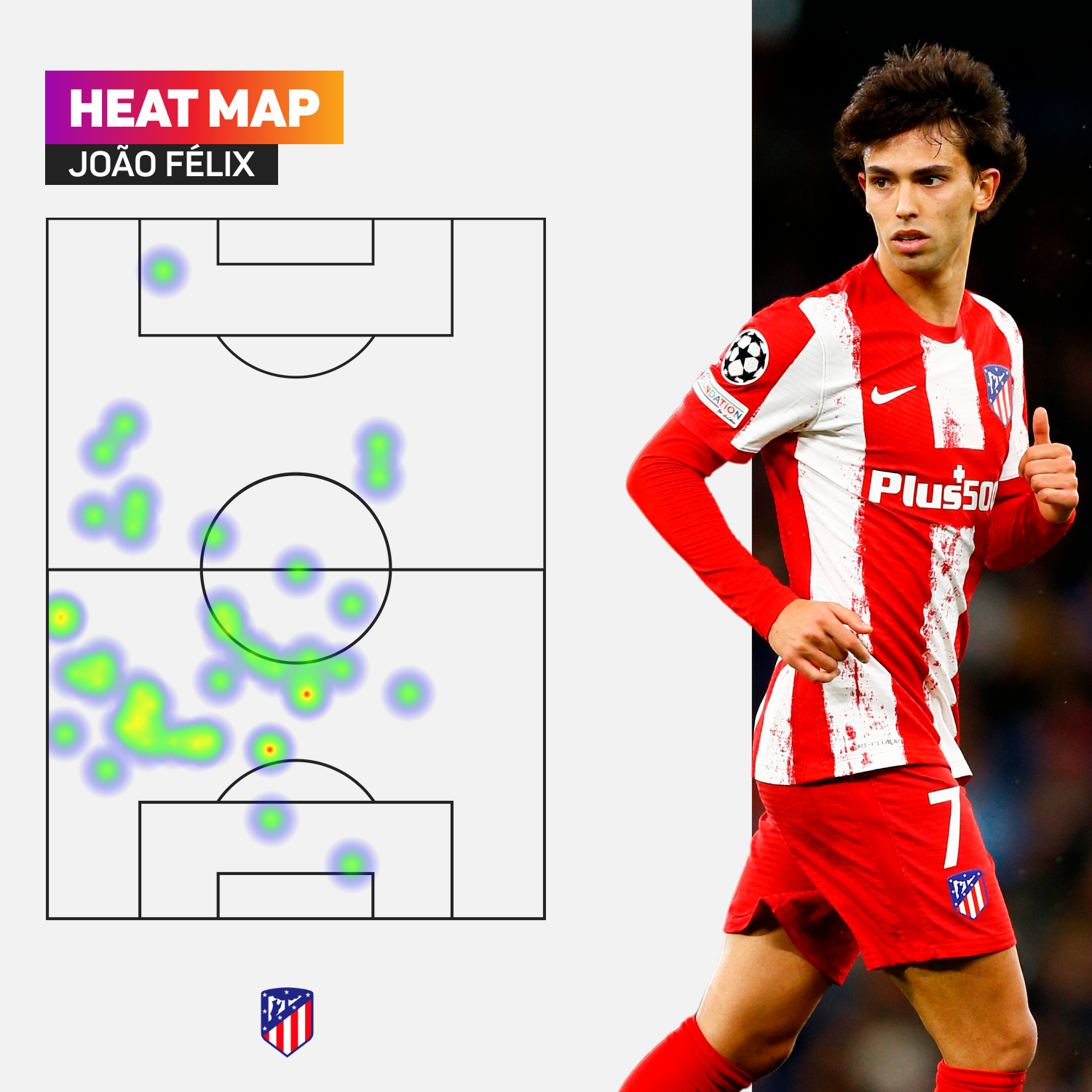 He did his defensive work diligently, making a team-high five interceptions, going in for nine duels (slightly above his per-game average of 8.1 this season), and was able to at least get City working back the other way with some impressive, surging runs before he was replaced by Thomas Lemar.

Simeone's tactics must change in the second leg, though, if Atleti are to progress, and a more open game could provide Joao Felix with the opportunity to shine.

Only Luis Suarez (13) and Angel Correa (12) have scored more goals for Atleti this season than the 22-year-old, whose 15 goal involvements ranks joint-second in the squad behind Correa.

Joao Felix has netted seven times in 21 Champions League appearances for Atleti, making him the club's top scorer in the competition since the start of the 2019-20 campaign, and Simeone has to find a way to get him into more adventurous positions this time around. 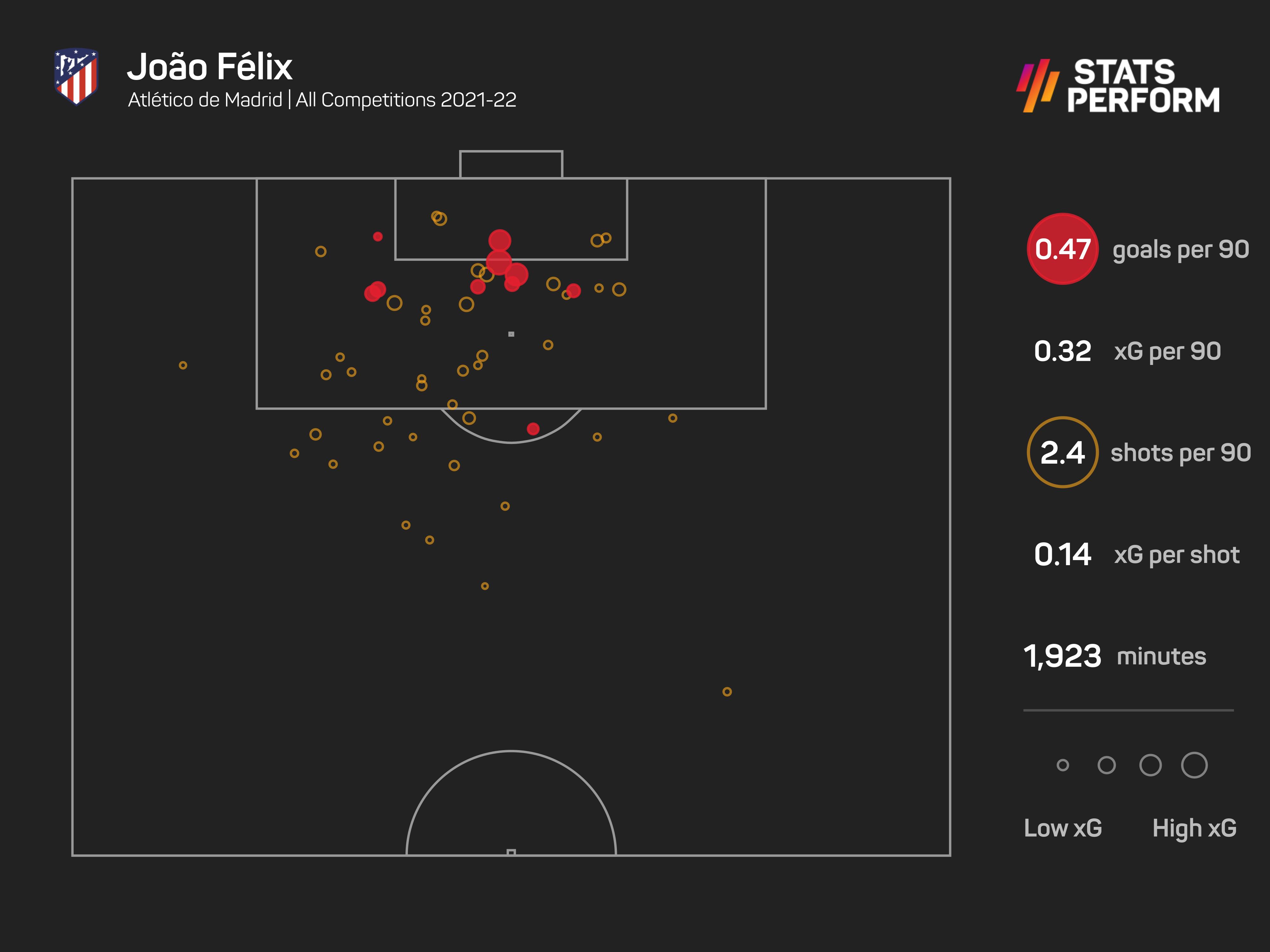 Not that Joao Felix needs to be provided with gilt-edged opportunities. His expected goals (xG) of 6.9 this season in all competitions means he has a +3.1 differential between his xG and his actual tally. In fact, this differential is larger than Kylian Mbappe's (3), Erling Haaland's (2.5) and Paulo Dybala (2.15), and second only to Correa (4.6) in Atleti's team.

Essentially, he is scoring more goals than predicted given the quality of opportunities coming his way, although an expected goals on target (xGOT) of 7.9 suggests he may have benefitted from some goalkeepers not keeping out shots they should have done better with.

Atleti have a supreme talent on their hands who finally seems to be living up to his enormous potential. Lighting up a Champions League quarter-final and sending Simeone's men into the last four just might be the seminal display that Joao Felix needs to prove he can be considered among the very best.