'It is impossible for a goalkeeper to win it… even more with Benzema!' – Courtois casts doubt on Ballon d'Or hopes

Despite his Champions League heroics, Thibaut Courtois believes he will not win the Ballon d'Or, in part down to the form of Karim Benzema.

Thibaut Courtois believes he has little chance of winning the Ballon d'Or despite his incredible Champions League final performance for Real Madrid, noting the presence of team-mate Karim Benzema makes such an honour even more unlikely.

Liverpool managed 24 shots throughout the contest, the most a team has recorded without scoring in a Champions League final since Opta records began (in 2003-04).

Courtois' tally of saves, meanwhile, is the highest on record in a single Champions League final, with his 59 across Madrid's dramatic European campaign also a single-season record (both since 2003-04).

However, after being named man-of-the-match, Courtois cast doubt on his chances of winning the biggest individual prize in world football.

The 30-year-old said goalkeepers have little chance of being named the best player in the world, particularly given the form of Benzema, who scored 44 goals and added 15 assists in all competitions as Madrid were crowned champions of both Spain and Europe.

"It is impossible for a goalkeeper to win it, even more so if he plays in a team with Benzema," he told reporters, as quoted by Tuttomercato.

"I can go far, but it is difficult to win this trophy.

"For me, what matters is the fact that when I returned to the locker room, all my team-mates were screaming my name. This is worth more than personal recognition." 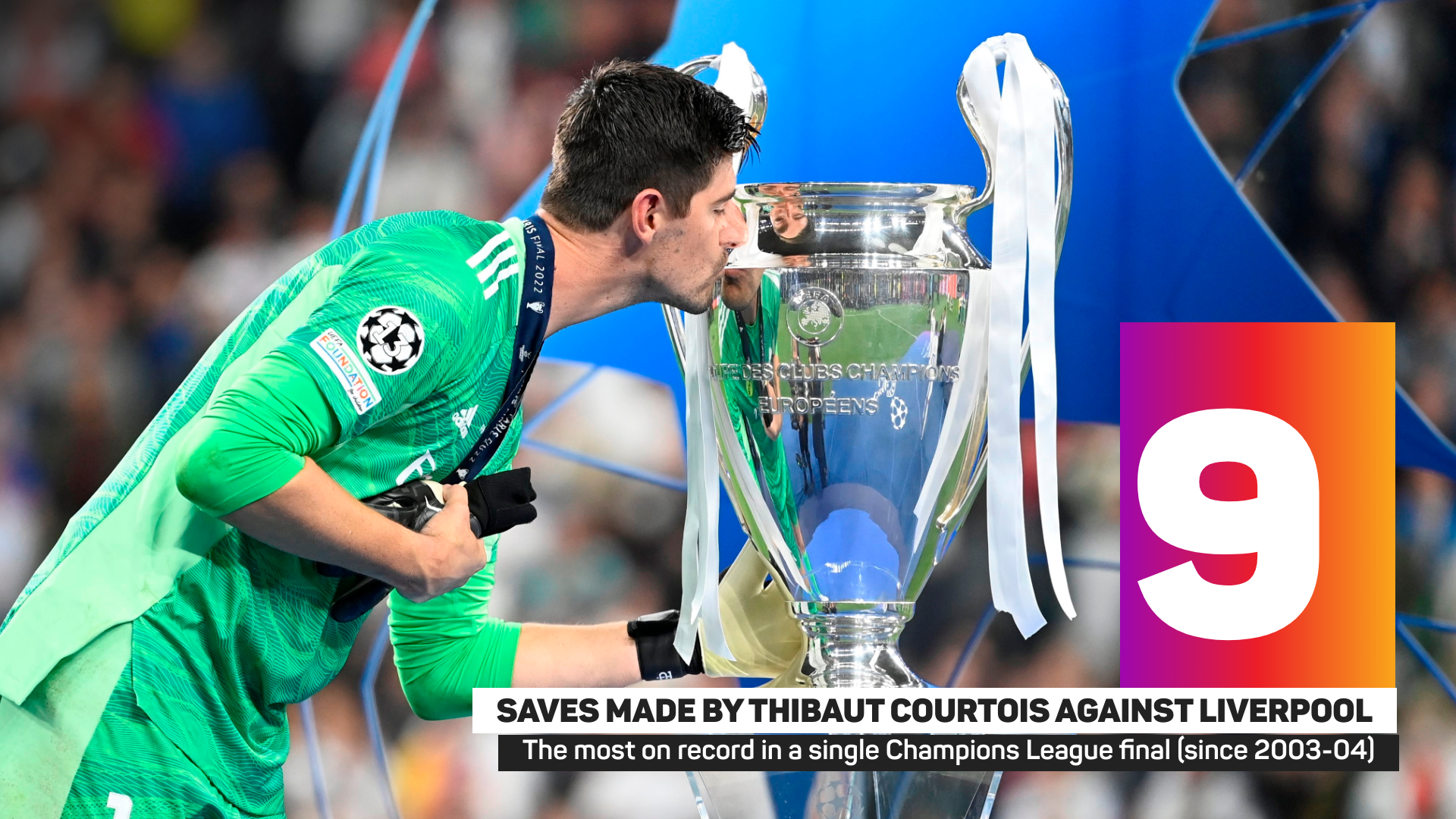 Lev Yashin is the only goalkeeper to win the Ballon d'Or, doing so in 1963, while Bayern Munich's Manuel Neuer came third in 2014.

Courtois also topped the Champions League charts for save percentage (80.6, minimum five saves), and goals prevented according to expected goals on target data (4.7) this season, before capping his fine season in perfect fashion in Paris.

While Courtois was keen to emphasise the collective nature of Madrid's success, he believed his saves from Mane in the first half and Salah after the break were crucial.

"It is incredible for me to win the Champions League final like this. For me, it was not important to be a protagonist, it was important to win," he added

"I was ready, I made an important save at 0-0 and one at 1-0. The one on Salah with my hand was beautiful, but also the one with my foot.

"I'm here to help my teammates, to keep the clean sheet and win. I'm happy to have been MVP in the final."

Writing on Twitter on Sunday, the former Chelsea man said: "I feel sorry for Liverpool fans and the way they were treated. I hope everyone got home safe!"