Robert Lewandowski broke Gerd Muller's long-standing record, but it was not enough for him to win the Bundesliga Player of the Season award.

Erling Haaland has been named the Bundesliga Player of the Season for 2020-21, despite Robert Lewandowski's 41-goal campaign.

Lewandowski broke Gerd Muller's record of 40 league goals in a single campaign when he netted with the last kick of the game – and the season – in a 5-2 win over Augsburg on Saturday.

Muller, a Bayern Munich great, had achieved the feat during the 1971-72 season.

For a long period of Saturday's game at Allianz Arena, it appeared as though Lewandowski would fall agonisingly short of sitting out in front on his own. 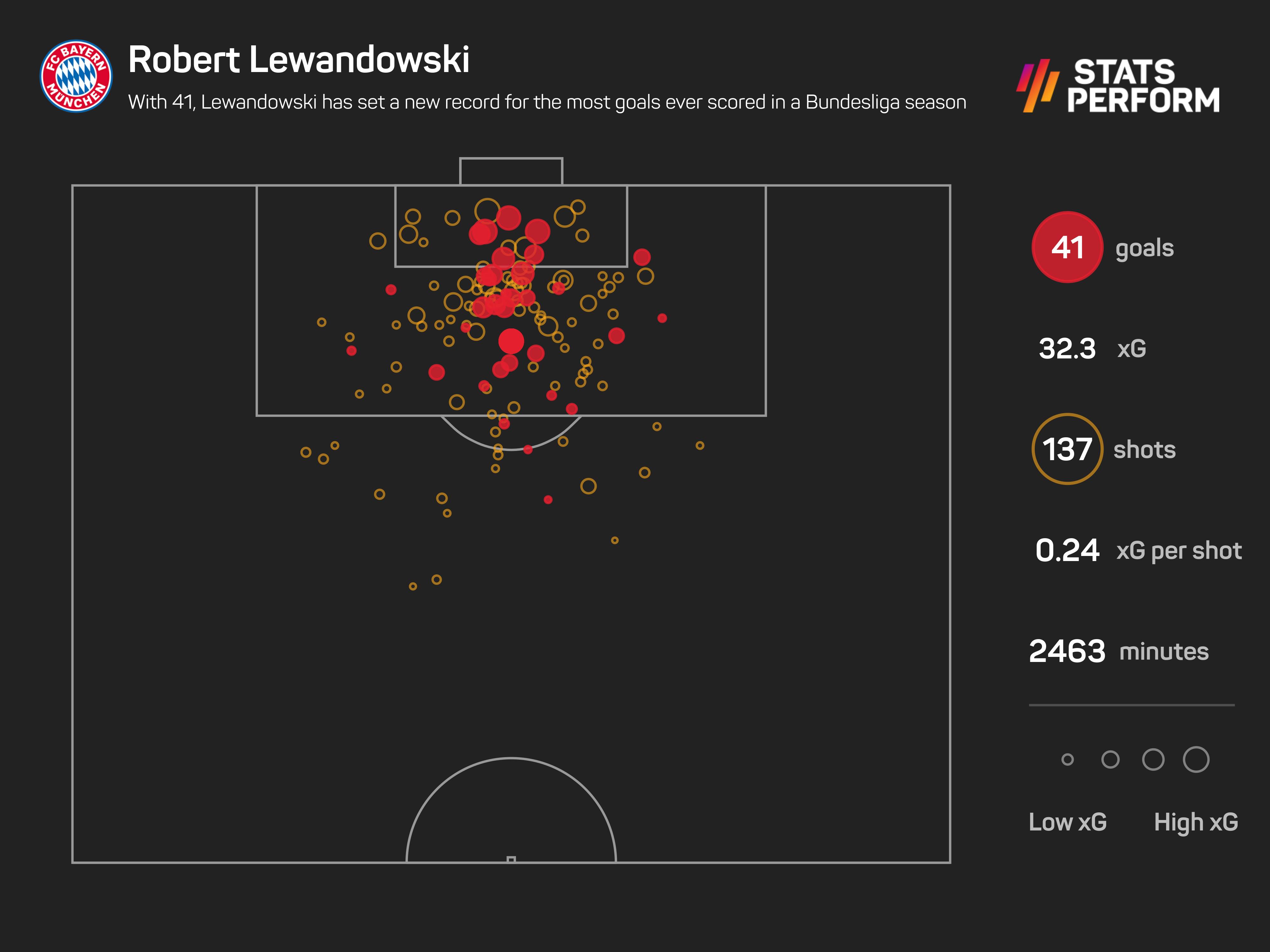 In total he had 10 shots, six of which were on target, in a game that marked the last of Hansi Flick's tenure as Bayern head coach, but the Poland star finally got his goal at the final moment.

Yet this effort was not enough to warrant the Bundesliga's Player of the Season award going Lewandowski's way, with another of the league's outstanding goalscorers instead scooping it.

An honour to be awarded with the @Bundesliga_DE Player of the Season! An achievement not just for me but for the whole @BVB family. We won this award together! pic.twitter.com/GqhPxXFvKW

Haaland, who has been linked with a huge move this close season, netted 27 times in 28 Bundesliga appearances for Borussia Dortmund.

It saw him finish third in the scoring charts, behind Lewandowski and Eintracht Frankfurt's Andre Silva (28 goals in 32 appearances).

Haaland's tally did include the 20-year-old scoring two or more goals in 11 Bundesliga matches, with only Muller – also in the 1971-72 campaign – doing so on more occasions in a single season (12).

Whereas Lewandowski and Silva scored eight and seven penalties respectively, only two of Haaland's goals came from the spot.

His trusty left foot delivered 24 goals, and he scored two with his right. Surprisingly for a player with such height, only one goal came from Haaland's head, and all but one came from inside the area. 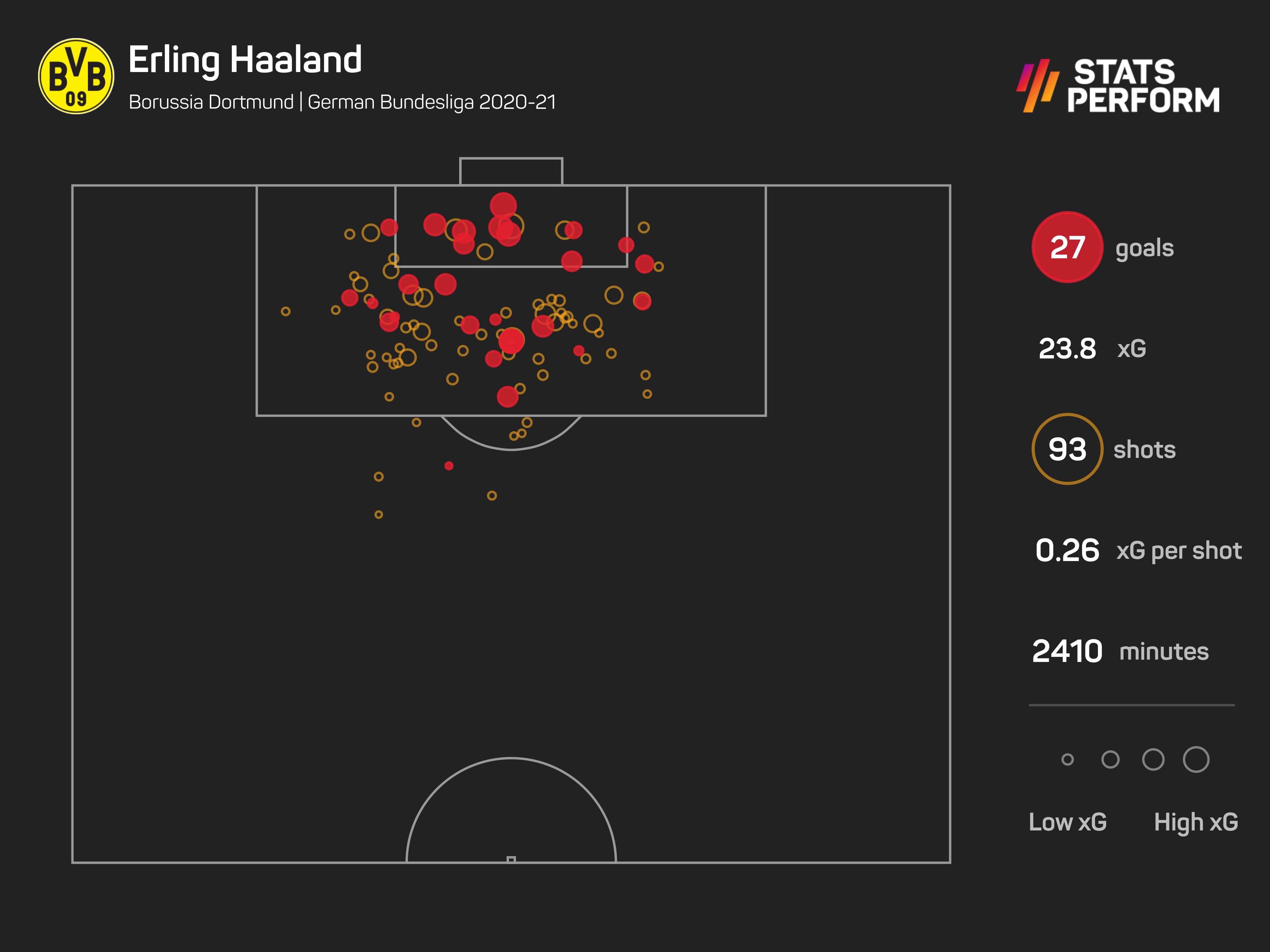 Haaland averaged a goal every 89 minutes, a total bettered by some distance by Lewandowski, who hit the net every 60 minutes – a remarkable feat nevertheless by the former Salzburg striker.

Overall, Haaland helped Dortmund to 17 victories as they qualified for the Champions League – Lewandowski helping Bayern to 20 while playing one game more than his Norwegian counterpart.

"An honour to be awarded with the Bundesliga Player of the Season! An achievement not just for me but for the whole BVB family," Haaland tweeted on Tuesday.

"We won this award together!"

After impressing for PSV last season and the Netherlands at Euro 2020, Donyell Malen has completed a switch to Borussia Dortmund.

Haaland discusses Chelsea reports: €175m would be a lot for one person!

Chelsea are keen to sign Erling Haaland, but the Borussia Dortmund striker is not impressed by the massive reported transfer fee.

Rumour Has It: Pressure on Manchester United as Pogba enters PSG talks

Manchester United are under pressure to sell or renew Paul Pogba before he becomes a free agent in 12 months' time.