Griezmann to Atletico Madrid: How did 2020-21 stack up against his best season?

Antoine Griezmann could be set for a return to Atletico Madrid, with the France forward having never hit the same heights at Barcelona.

Reports in Spain suggest Atletico Madrid and Antoine Griezmann could be set for a reunion, just two years after Barcelona broke their transfer record to sign the France star.

He went on to score 94 LaLiga goals for the club, before a long-mooted switch to Barca went through in 2019.

Yet Griezmann, who turned 30 in March, has never quite managed to scale the same heights at the Camp Nou as he did in Madrid.

A disappointing first campaign marred by injuries and inconsistency left Griezmann playing catch up last term, though he did net 20 times across all competitions to finish as Barca's second-highest goalscorer, behind the imperious Lionel Messi.

With the uncertainty over Messi's future seemingly set to be resolved by a new five-year deal, reportedly worth half of the 34-year-old's previous contract, Barca have to clear their wage bill if they are to comply with LaLiga's salary cap.

The Blaugrana have added Sergio Aguero, Memphis Depay, Eric Garcia and Emerson Royal in the close-season, though are unable to register those new signings until players are moved out.

Griezmann, who is one of the club's highest earners, looks set to be one of the names to make way in a swap deal involving Saul Niguez – though Renan Lodi and Mario Hermoso have also been touted as potential options for Barca. Ahead of his potential return, Stats Perform assesses how Griezmann's efforts last season match up to his best campaign from his first Atleti stint. 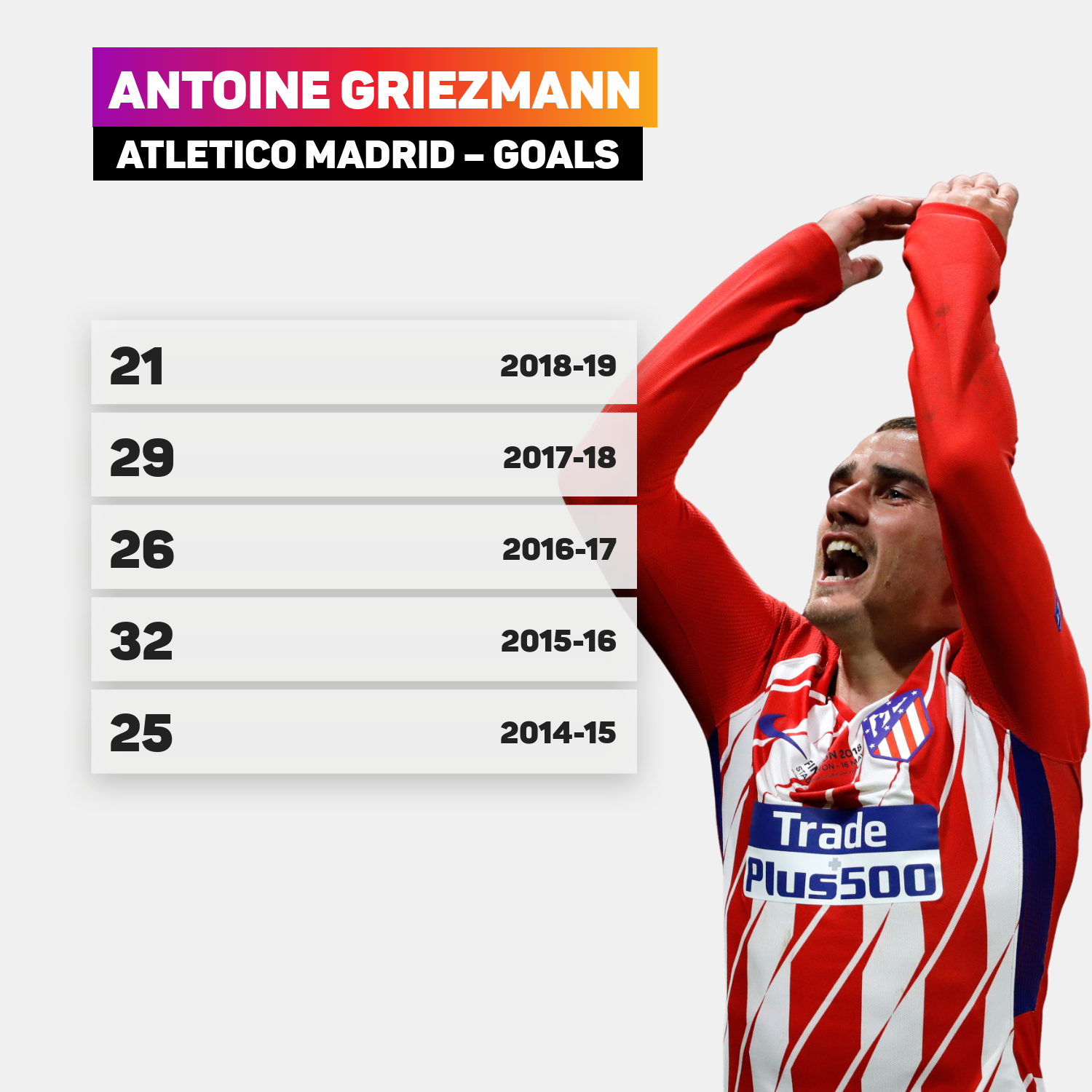 GRIEZMANN AT HIS PEAK

Griezmann was the perfect example of consistency throughout his time at Atleti, as he became the perfect, versatile forward for Simeone's disciplined side.

He partnered Mario Mandzukic, Fernando Torres and Diego Costa among others during his time at the club, transforming himself from a nippy winger to a central striker with predatory instincts in the area, as well as harbouring plenty of creative talents.

His tally of 19 LaLiga strikes was 11 more than any other Atleti player, as he finished sixth in the scoring charts overall.

Griezmann added another 10 goals across the cup competitions, however, including a brace in the Europa League final, which Atleti won 3-0 against Marseille in Lyon.

Only Griezmann got into double figures for Atleti in terms of assists (13), while only Koke (81) created more chances than his 65.

Griezmann was clinical when opportunities came his way, too, converting 52.38 per cent of the 42 "big chances" that were crafted for him, and he ranked top for attempts (124) as he averaged a goal every 133 minutes.

To cap off an exceptional domestic campaign, Greizmann put in a man of the match display as France beat Croatia 4-2 in the 2018 World Cup final. 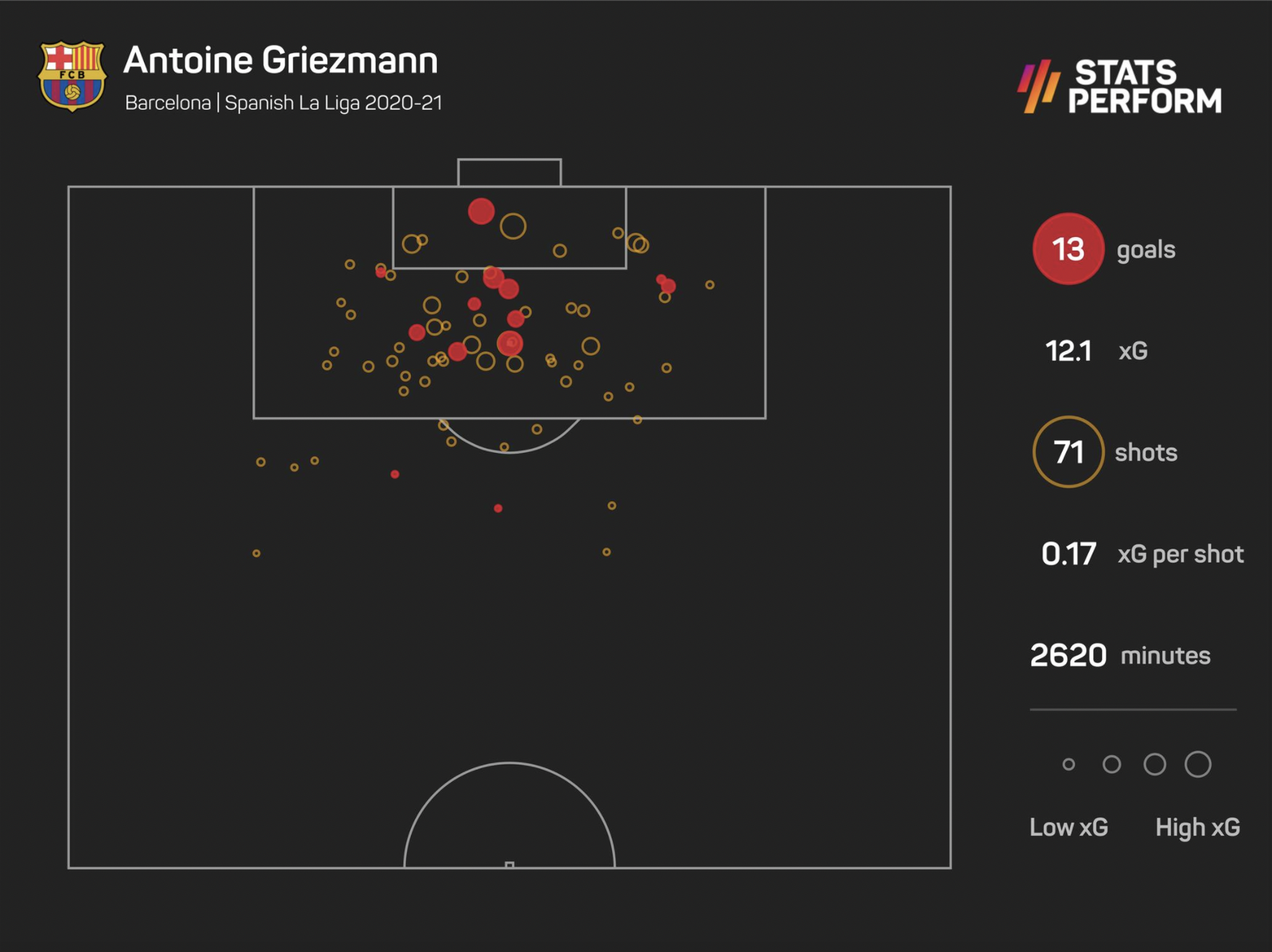 After making much of his call to stay put at Atleti – Griezmann having taken part in a mini-documentary to confirm his decision before the World Cup – the 28-year-old completed a €120million switch to Barca a year later.

It came with controversy; Atleti insisting Barca had fallen some €80m short of the obligated fee, but the transfer was nevertheless upheld.

His first season at Camp Nou was one to forget. The coronavirus pandemic merely prolonging a dismal campaign by Griezmann's lofty standards – the nadir for all involved at Barca coming in the humbling 8-2 Champions League defeat to Bayern Munich.

Yet Griezmann came into his second season with a renewed sense of purpose and finally seemed to click under new boss Ronald Koeman.

While still having to fit in around key man Messi, Griezmann played 51 times in all competitions, making 45 starts, clocking up 3,904 minutes in total (the second most he has managed in a campaign since his move to Atleti). 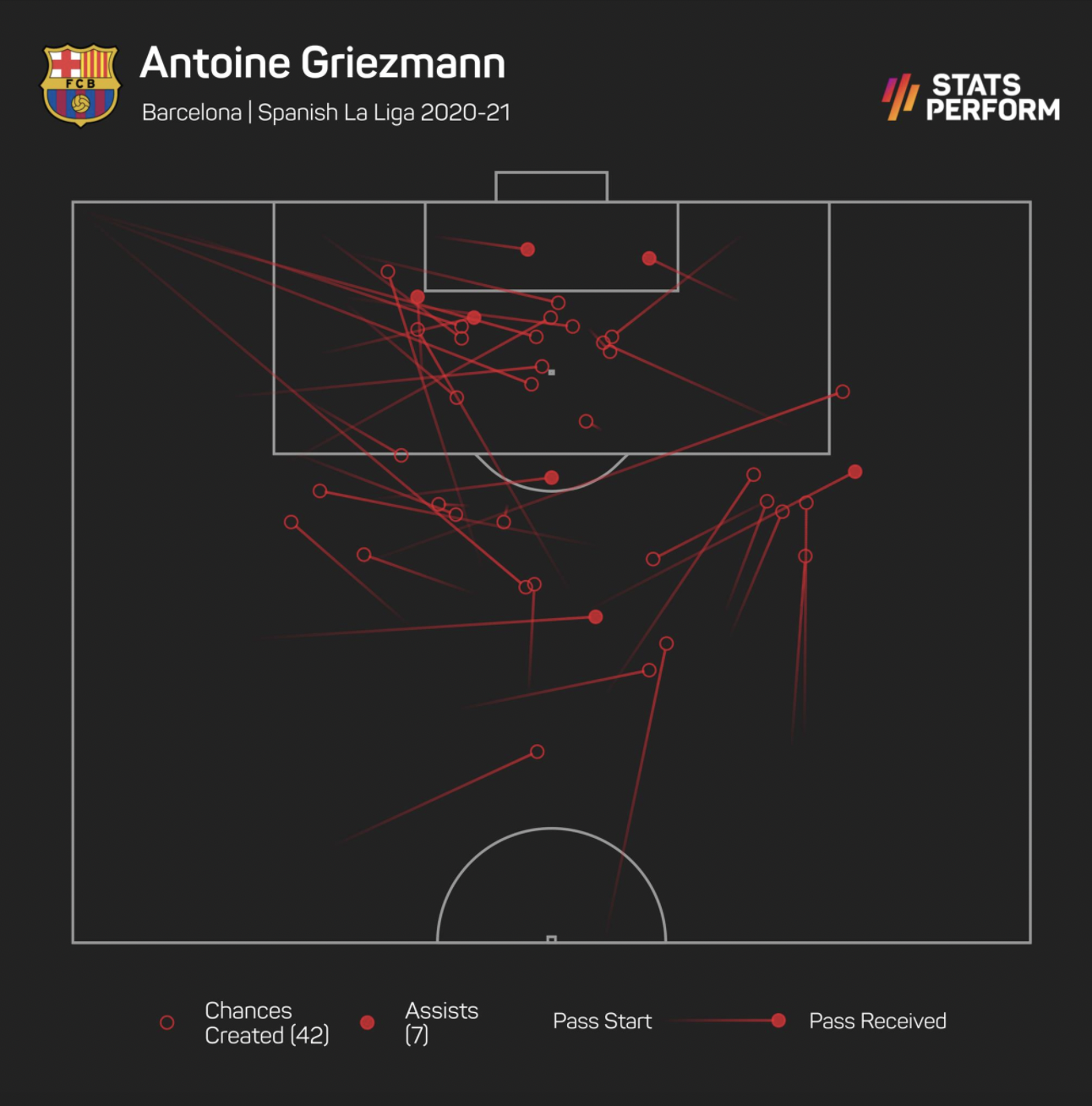 His expected assists (xA) total of 8.99 does, however, suggest the quality of opportunities he created was perhaps not wholly responsible for his 12 goal provisions. Given he was linking up with Messi, that is perhaps no surprise. This was, though, also the case in 2017-18, with Griezmann tallying an expected assists figure of 6.3, suggesting his Atleti team-mates were finishing chances they may not have been expected to.

Griezmann created more chances (67) last term than in his 2017-18 season, though his conversion rate of gilt-edged opportunities dropped to 39.39 per cent from 33 such openings.

Depay convinced he can form partnership with 'compatible' Messi and Aguero

Lionel Messi is expected to commit to Barcelona and Memphis Depay is looking forward to linking up with the forward and Sergio Aguero.