Germany suffered their heaviest international defeat since 1931 when they lost 6-0 to Spain two years ago, and now the teams meet again.

The official line is that it doesn't matter. It's an irrelevance. In fact, why are we even talking about it?

"I don't think that it plays any role. It was two years ago," said Julian Brandt on Friday.

But Spain's 6-0 slicing and dicing of Germany in November 2020 looms large over Sunday's re-match at Al Bayt Stadium, however much any protagonists pretend to ignore its presence.

Germany's record defeat in a competitive international came in that Nations League contest played in Seville, and while Joachim Low hung on a little longer as coach, that was the night when his fate was as good as sealed.

So there's one thing that has changed since the humiliation at La Cartuja: Low has gone and Hansi Flick is pulling the strings for Germany, the former Bayern Munich boss entrusted with leading the team into the World Cup.

"We are in a different position now and have improved in a lot of areas – even if not everything is going smoothly," said Germany midfielder Brandt.

How's about that for understatement of the year?

Germany are positively reeling, on the brink of a second consecutive World Cup group-stage elimination after folding to a 2-1 defeat against Japan in their Group E opener.

Their hopes hinge, more than likely, on finding a way to beat Spain, a team who left scorched earth in their wake while crushing Costa Rica 7-0 on matchday one.

"At the end of the day, it is a chance to change the mood," reckoned Brandt. "A game like this can energise you a lot. The 6-0 doesn't play a part for any player."

To which one can only hold one's hands up and commend the focus of the modern-day player if they can genuinely freeze out memories of such dark nights. 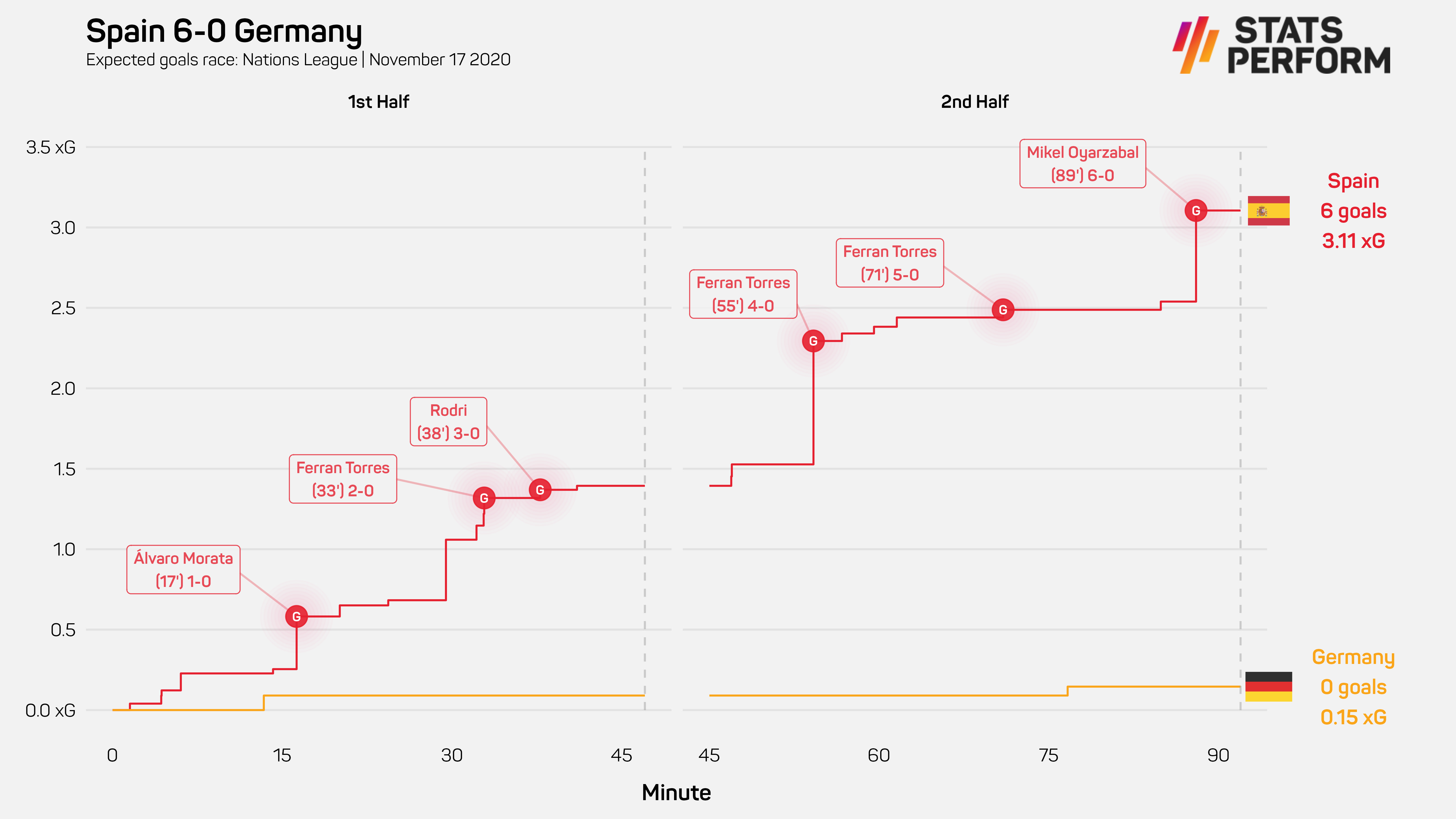 Brandt was an unused substitute for that six-goal shellacking, so perhaps the scars genuinely have faded in his case.

As a bystander, he could hardly be held responsible, and Brandt was also a bench-warmer throughout Germany's capitulation against Japan, so he gets another free pass there.

Where is there accountability then? Perhaps German FA (DFB) technical director Oliver Bierhoff is the man to be looking at, having been in post for coming up to five years.

Bierhoff gave Low his backing after the Spain shambles two years ago, and bringing his involvement up to the present day, the former striker said Germany were "really, really angry" at themselves for folding against Japan.

The Euro 96 final match-winner described the upcoming Spain game as "the first final" for Germany at this World Cup.

He also told broadcaster ARD it was "a myth" the team needed to be friends and said "friction and conflict" could be positive.

So there might not be absolute love and harmony in the ranks, but Bierhoff insists Germany are fully focused on their mission.

"That's the most important thing," Bierhoff said, "that in the end, even though we are many different personalities and have different ideas, we all submit to one single goal: to play a successful World Cup."

Germany have never lost consecutive group games in a single edition of the World Cup, but this team doesn't let history stop them achieving firsts. After all, they had only lost their opening game at a World Cup once in their first 18 appearances at the finals, prior to 2018, but now they have surrendered openers at consecutive editions.

In World Cup games where Germany had scored at least once, they were unbeaten in 29 matches (W25 D4) before tossing away a first-half lead to hand over three points to Japan on Wednesday. Their last such defeat was the famous 2-1 quarter-final loss to Bulgaria at USA 94.

They've never lost three consecutive World Cup games, but their 2018 campaign ended with a painful defeat to South Korea, then came Japan, and now Spain stand in their way.

The good news for Germany is that Spain have not won their opening two games at a World Cup since 2006. In 2010, when they went on to lift the trophy, Spain lost to Switzerland in their opener, so mishaps can happen.

Rather more bleak for Flick and Co is that Germany have won just one their last seven games against Spain, a 1-0 friendly success in November 2014. They have drawn two and lost four in that span and have not beaten Spain in a competitive game since Euro 88, drawing two games and losing three.

Where should Germany look for positives?

Young midfielder Jamal Musiala has emerged in the two years since that dismal trip to Andalusia, but Germany sorely lack a world-class striker, the sort that might have put the Japan game to bed before the underdogs set about fighting back in the final quarter.

3.3 - Germany lost 1-2 to Japan despite a tally of 3.3 Expected Goals - since Opta collects this data (1966 onwards), no team has ever lost a World Cup match with such a high xG value. Wasteful. #GERJPN #FIFAWorldCup pic.twitter.com/eGpBO0hFU7

Arguably the same might be said of Spain, but Ferran Torres hit three in the 6-0 rout and netted twice against Costa Rica, so Germany must be watchful there.

Spain toppled Germany 1-0 in the 2010 World Cup semi-finals, the first and only time they have defeated the four-time champions in the tournament's history.

They have talent pouring through the ranks, with the likes of Pedri, Gavi and Dani Olmo impressing against the outclassed Costa Ricans, while Germany bring a familiar cast, star-studded but struggling to equal the sum of their parts.

After the Spain game in 2020, Flick, then with Bayern Munich, said of the national team: "I was disappointed with the way we played football. On the other hand, these things are possible in football, sometimes you get run over and, in the end, you have to draw the right conclusions."

Now, however, it emphatically is his job. Flick has to work out how to lift a group left shattered by Japan's comeback, while ignoring the elephant stomping around the room, trumpeting the message that the last time Germany encountered Spain, it went down as one of the national team's darkest days.

But it could get darker still. If Germany crumble again to La Roja, this time at the World Cup, prepare for a total eclipse of Die Mannschaft.