France defeat to Denmark down to lack of sharpness, says assistant boss Stephan

Andreas Cornelius struck twice to inflict a 2-1 loss on France, a defeat that assistant Guy Stephan put down to fatigue.

France's surprise 2-1 loss to Denmark in the opening game of their Nations League title defence was down to a lack of sharpness, according to assistant boss Guy Stephan.

The defeat is France's first inside 90 minutes in a competitive game on home soil since losing 1-0 to Spain in March 2013.

It is also the first time the reigning World Cup winners have lost a game in which they have led since going down 3-2 to Colombia in a friendly a little over four years ago.

And at the end of a long season, France coach Stephan – filling in for Didier Deschamps, who is mourning the passing of his father – believes fatigue played a big part.

"We knew that Denmark were a good team, with a very good structure," Stephan told M6.

"Without looking for an excuse, we're coming to the end of a season in which the players have played a lot. I have nothing to blame them for.

"It was a match between two good teams. We had some good spells and some less good spells.

"We just needed some freshness to be able to express ourselves and we didn't have that today." 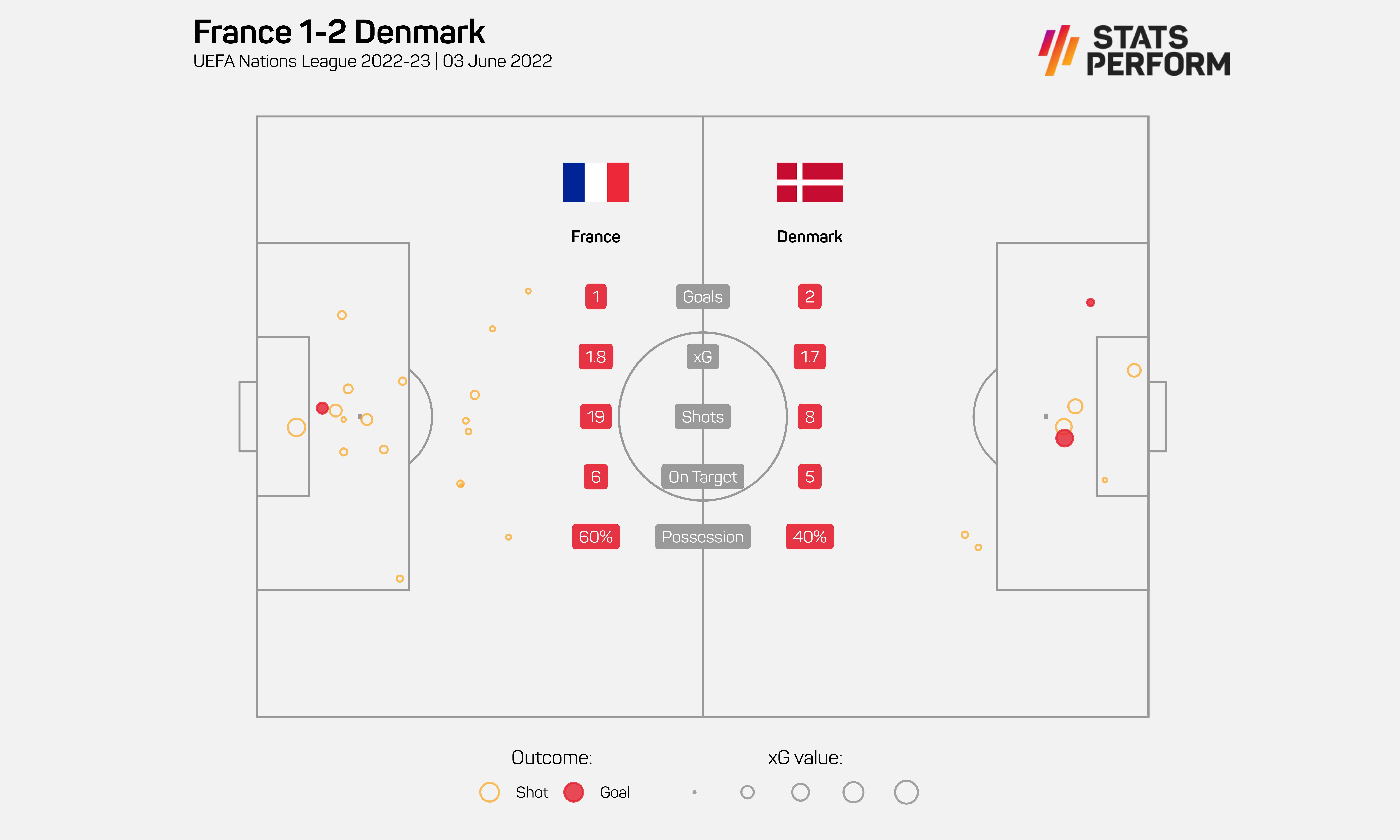 The hosts had 19 shots to Denmark's eight, yet Cornelius' double – making him the first substitute to score twice against France – earned his side a shock win in Paris.

Cornelius volleyed in from a fine Pierre-Emile Hojbjerg pass for his opener and then thumped a winner past Hugo Lloris at his near post two minutes from time.

"There are never good times to suffer defeats," Lloris told M6. "There's still a long time to go until the World Cup, though of course it's never good to start a campaign with a defeat.

"We fell against a good, well-organised team. At 1-0 we had chances for a second, but we were so committed to the attack that there were also risks that Denmark exploited."

France replaced Kylian Mbappe with Christopher Nkunku at half-time, which Stephan confirmed was a precautionary measure after the Paris Saint-Germain star injured his knee.

Raphael Varane also hobbled off in the second half and will undergo a scan on his thigh ahead of Monday's trip to Croatia in Les Blues' second Group A1 outing.

Deschamps is set to return to the France camp on Saturday ahead of that game, which takes on added importance following Croatia's 3-0 loss to Austria elsewhere on Friday.