Donnarumma determined to 'grow' at PSG after leaving Milan

Gianluigi Donnarumma stated he and Milan "had different ambitions" as he explained his reasons for leaving the Rossoneri.

Paris Saint-Germain's new goalkeeper Gianluigi Donnarumma believes he needed to move away from Milan to grow as a player.

Donnarumma left Milan upon the expiration of his contract at the end of June, subsequently joining Ligue 1 giants PSG on a free transfer.

The 22-year-old – who made his Milan debut at the age of 16 in 2015 – is one of five star recruits PSG have made this transfer window, with Sergio Ramos, Achraf Hakimi, Georginio Wijnaldium and, of course, Lionel Messi also arriving at the Parc des Princes to bolster an already remarkable squad.

After making 30 Serie A appearances in 2015-16, Donnarumma missed just five league games for Milan over the past five campaigns, establishing himself as one of the world's best goalkeepers.

He only helped his reputation at Euro 2020, playing a starring role as Italy won the competition – indeed, Donnarumma made two saves in the penalty shoot-out victory over England in the final on July 11.

While he awaits his PSG debut having only just resumed training following an extended break, Donnarumma revealed his reasons for leaving Milan.

"I spent eight years at Milan, it was my home, I experienced wonderful moments there," he told Corriere dello Sport.

"Milan still excites me today, I have great respect for the people who work there and for the fans. But life is made up of choices, we had different ambitions.

"I will always be a fan of Milan. Eight years are not forgotten, but I needed to change to grow, to improve and become the strongest. I felt the need for new spaces, for a new reality."

Donnarumma also insisted the decision to leave the Rossoneri was his alone, with agent Mino Raiola having little influence.

"There are decisions that have a maturity. I have always made my career choices alone, my family has always left me free and supported me," Donnarumma continued.

"Mino did the same. He respects the wishes of his clients 100 per cent, then of course he does everything to satisfy their requests. I left Milan and I had no contact with other teams, I swear, but I was sure that with a good Euros, someone would show up."

With three of their new additions, along with star names such as Marco Verratti, Neymar, Angel Di Maria and Marquinhos, yet to feature, PSG have nevertheless made a winning start to their first full Ligue 1 campaign under Mauricio Pochettino, though they did lose the Trophee des Champions to Lille, who won the top flight last term.

Donnarumma, though, knows PSG's true goal comes in the form of European glory.

"Last season, the team did not win Ligue 1 but the real objective is different – the Champions League," he said. 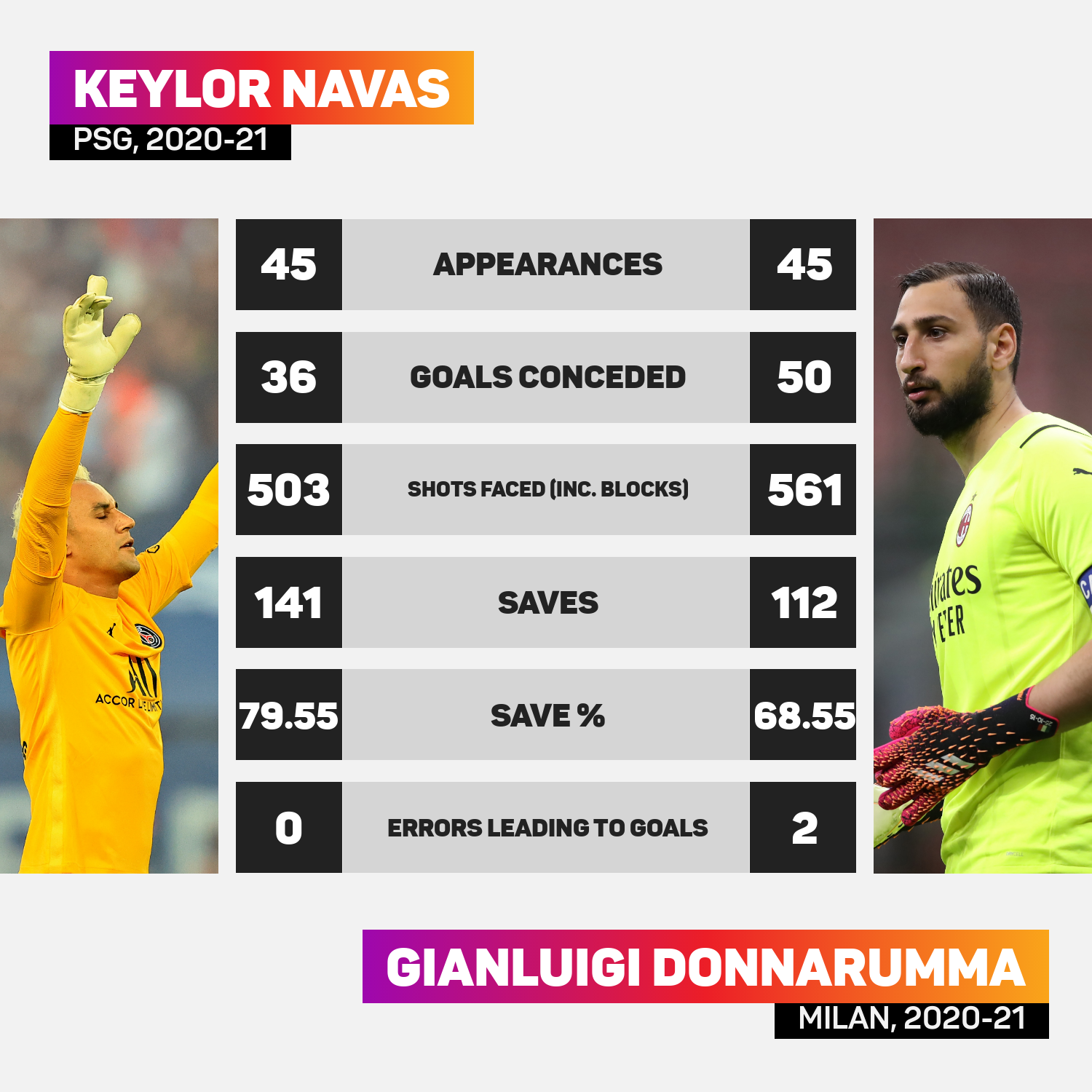 Donnarumma's switch to Paris does raise some questions, as PSG already had a superb goalkeeper in the form of Keylor Navas.

Both played 45 games in all competitions for their clubs last term, though Navas conceded 36 goals, 14 fewer than Donnarumma's tally of 50.

Donnarumma did face more shots (561 compared to 503), yet Navas' save percentage was still noticeably better – the former Real Madrid shot-stopper keeping out 79.55 per cent of the attempts he faced, in contrast to a rate of 68.55 from his new team-mate.

Navas saved three penalties, with Donnarumma making one save from a spot-kick, while the Italy international also made two errors leading to goals – his Costa Rican counterpart, on the other hand, made none.

In terms of distribution, the players are similar, with Donnarumma tallying up more passes (1,310) though with a slightly lower accuracy (79.08 per cent compared to Navas' 80.23 from 1,123 attempts).

On the subject of competing with such a high-quality goalkeeper for the number one shirt, Donnarumma said: "It's an additional motivation, something that fascinates me."