Denmark forward Kasper Dolberg scored twice at the home of ex-club Ajax to earn his country a famous 4-0 Euro 2020 last-16 win over Wales.

Kasper Dolberg described his two-goal haul against Wales as "completely crazy" after helping to fire Denmark into the quarter-finals of Euro 2020 with a 4-0 win.

The Nice forward scored either side of half-time to put the Danes in control of Saturday's last-16 tie at the Johan Cruijff ArenA, where he previously spent three years with Ajax.

In doing so, Dolberg became only the second Denmark player after Henrik Larsen against the Netherlands in 1992 to score two goals in a knockout game at a major tournament.

Further goals from Joakim Maehle and Martin Braithwaite followed, either side of Harry Wilson's red card, as Kasper Hjulmand's side ran riot in Amsterdam.

Dolberg, who is Denmark's youngest scorer in the knockout stages of the Euros, received the man of the match award and struggled to sum up his emotions after the match.

"It's completely crazy. I actually don't know how I feel. This is total madness. It's surreal," he told Danish television station DR.

"It was here it all started for me with Ajax, and to play here again in this setting was insane." 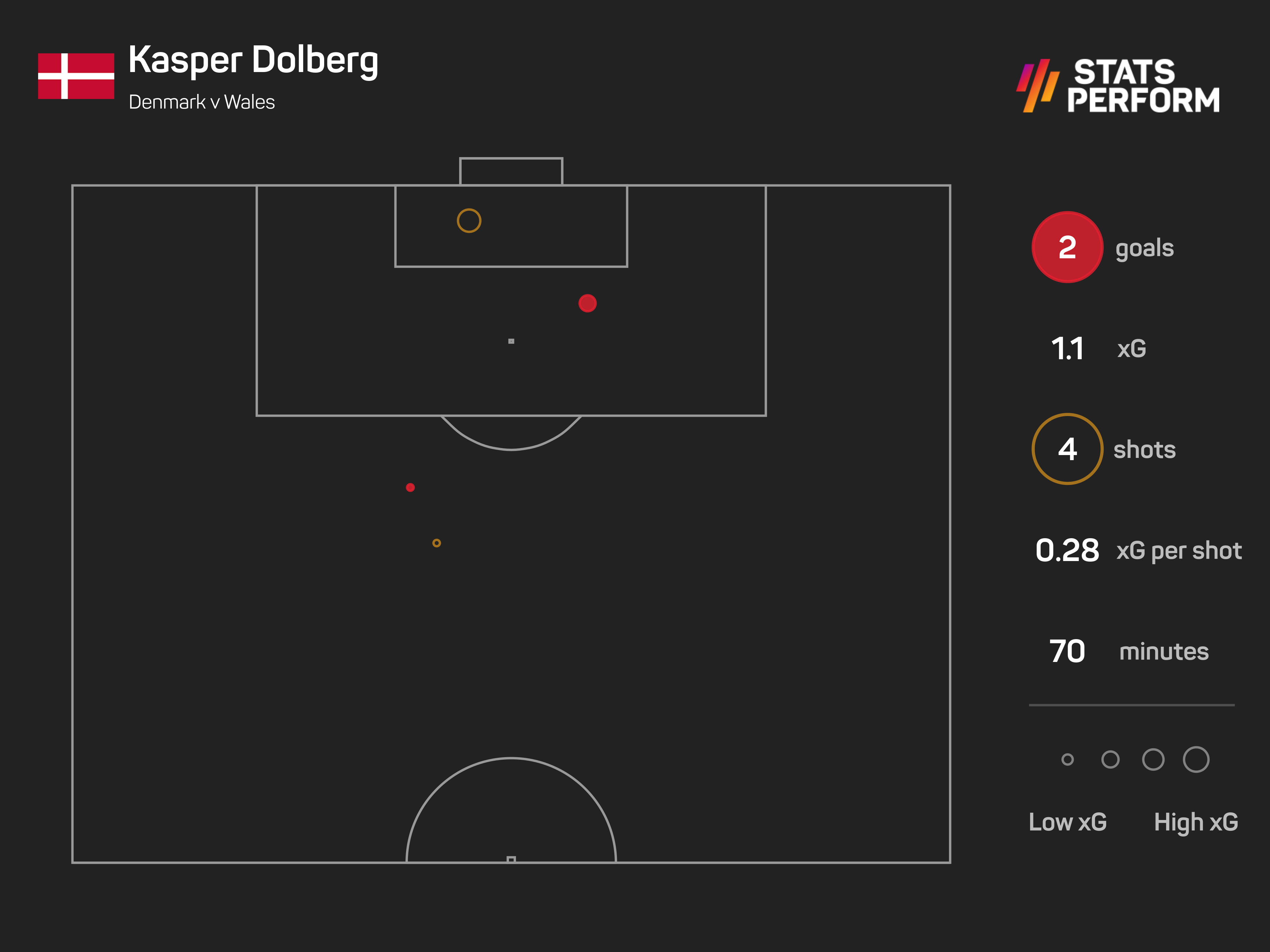 Since the start of 2019, only Christian Eriksen (11) has scored more goals for Denmark than the eight Dolberg has managed.

He had more shots (four) and shots on target (three) than anyone on the field, despite having just five touches in the Wales box before being taken off after 70 minutes, and scored his two goals from an expected-goals (xG) return of 1.1.

"It had to end this way with him scoring on his old home ground. I had a good feeling about him, and he was fantastic," Denmark boss Hjulmand told DR.

After thrashing Russia 4-1 to book their place in the last 16, Denmark are the first side ever to score four or more goals in successive European Championship matches.

It is also the first time they have won back-to-back matches at a single major tournament since the 1986 World Cup, and a meeting with either the Netherlands or the Czech Republic awaits in next week's quarter-finals.

"It's hard to believe that this is reality. I admire the boys and the fact that we can keep fighting," Hjulmand added. "No matter who plays, they play very well. The guys are true warriors.

"We showed today we are able to be flexible. Not everything was perfect during the game but we improved and that's something we've done several times."

Mauricio Pochettino's side made it eight wins from eight as they moved further clear at the top of the Ligue 1 table.

Gabriel Jesus helped Manchester City to a big win over title rivals Chelsea, while Manchester United slipped up at home.

Carlo Ancelotti saw his Real Madrid side frustrated by Villarreal in what was his 800th game as a coach on Saturday.

Jurgen Klopp expected the net to bulge when Mohamed Salah lined up a late chance, and the miss proved costly for Liverpool at Brentford.

Inzaghi: My decision for Dimarco to take penalty

Federico Dimarco could have secured all three points for Inter against Atalanta with his first Serie A penalty, but missed from the spot.

Ole Gunnar Solskjaer felt Aston Villa's winner against Manchester United should have been ruled out, but David de Gea was less incensed.

Milan sneaked past Spezia on Saturday and a familiar name to the Rossoneri appeared on the scoresheet.