Rodrigo de Paul has been confirmed as an Atletico Madrid player following weeks of speculation.

De Paul, 27, has signed a five-year contract with Los Colchoneros and gets the opportunity complete unfinished business in Spain.

The midfielder spent two years with Valencia from June 2014 but endured an unsuccessful spell, failing to win over Nuno Espirito Santo and then Gary Neville, who allowed him to return to former club Racing on loan in February 2016.

De Paul came through the youth ranks at Racing and made his jump up to the senior side the year after Simeone left the club for Atleti.

After his brief loan return to Racing concluded, Valencia sold De Paul to Udinese where he looked to recapture the form that had earlier seen him identified as one of South America's most-promising young players.

He was a regular throughout his five years in Serie A but enjoyed his finest campaign of all in 2020-21, displaying a skillset that looks an ideal fit for the requirements of a Simeone team.

Throughout Simeone's 10 years as Atletico coach, his signings of creative players have tended to be hit and miss, with it a common conception that his intense demands both in training and during matches can sometimes stifle more mercurial talents who are not used to such workloads.

But De Paul, who is comfortable playing both centrally and out wide, has shown plenty of evidence he should be up to the challenge and is relishing the chance to play under Simeone.

"I'm very happy to have the opportunity of working under Simeone's commands," he told Atleti's website. "Firstly, because of the kind of football manager he is; one of the all-time best.

"I love football, it's part of my daily life, and having a manager of Simeone's high-calibre guiding me is a privilege.

"In addition, it fills me with patriotic pride. I'll enjoy being under his command because I grew up watching him play with Argentina's national team." 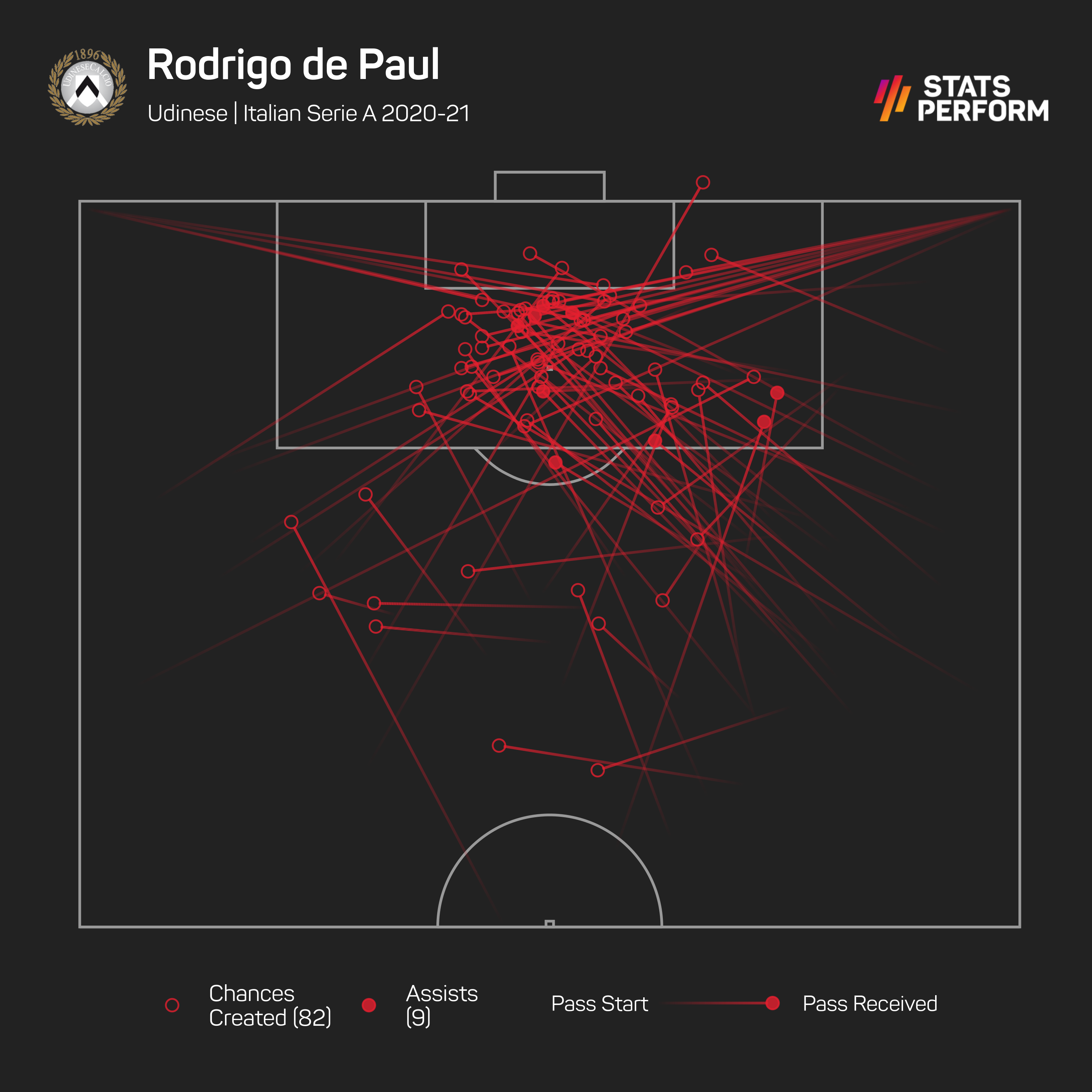 Providing creativity is De Paul's bread and butter, with his 82 key passes in 2020-21 bettered by only Hakan Calhanoglu (98) in Serie A.

Of those chances, 34 came from set-pieces, highlighting his prowess from dead-ball situations and ranking him fourth in Italy's top flight.

Only five players got more assists than his nine, but all of them massively out-performed their modest expected assists records, which ranged from 3.4 to 6.7. De Paul topped the charts for expected assists with 10.3 xA, evidence that his assists reflected the quality of his service rather than him getting lucky or benefiting from unusually good finishing by team-mates.

Yet the area which highlights a particular compatibility with Atleti is the fact he won more duels (294) than anyone else in Serie A in 2020-21.

Combine that with his league-leading completed dribbles (122) and it paints a picture of a hard-working player who also possesses the quality to get his team on the front foot.

He will join up with Atleti following a short break having played a crucial role in Argentina's recent Copa America success, in which he got the decisive assist for the Angel Di Maria goal that secured the title.

Griezmann to Atletico Madrid: How did 2020-21 stack up against his best season?

Antoine Griezmann could be set for a return to Atletico Madrid, with the France forward having never hit the same heights at Barcelona.

Rumour Has It: Man City rule out move for Barcelona forward Griezmann

Manchester City are in the market for a new striker after Sergio Aguero's exit but it will not be Antoine Griezmann.

Rodrigo de Paul has been confirmed as an Atletico Madrid player following weeks of speculation.

Lionel Messi officially became a free agent at the start of the month, with Paris Saint-Germain linked, but a new Barcelona deal is close.