There is undoubtedly a perception the World Cup's third-place play-off is little more than an exhibition match – compared to the final, anyway.

But for Croatia and Morocco, Saturday's clash at the Khalifa International Stadium holds a great deal of significance regardless of what others might think.

Croatia were denied the chance to reach successive World Cup finals by Argentina, while Morocco put up an admirable fight against defending champions France in their 2-0 defeat.

But the fact Croatia – who clinched bronze at the 1998 World Cup – were in the 2018 final does not diminish the achievement of potentially finishing third here for coach Zlatko Dalic.

"We are sad and disappointed, but we have to gather energy to come back and be ready for the next fight for bronze," he said.

"The match on Saturday is a big final for us, not a small [game]. It's a big deal if we get the bronze.

"We have to refresh the team and put healthy players in the team because a grand final is ahead of us.

"Morocco is the biggest surprise of the World Cup. They've got national backing, unity, compactness. They knocked out Belgium, Spain and Portugal. They deserve all the respect."

Of course, these two tussled in a rather drab goalless group-stage draw, when Croatia were restricted to just five shots, their fewest ever in a World Cup game.

That encounter was something of a foreshadowing: Croatia have not been one of the tournament's great entertainers.

Morocco caused France plenty of problems and will fancy their chances of worrying Croatia on Saturday, particularly given Dalic's side have faced more shots (75) than any other team at the tournament.

The Atlas Lions have certainly benefited from a degree of pragmatism as well, with one more clean sheet enough for them to become only the eighth team in tournament history to keep five in one World Cup.

Of course, Walid Regragui insisted his team want to finish third, but there's also a degree of their job being done as the head coach acknowledged the gravity of their achievement in becoming Africa's first World Cup semi-finalists

"I will give opportunities to those who did not participate, and we will try to clinch the third place," Regragui told reporters.

"We realise that we made a great achievement already. We know that from the media, social media, and on TV, we saw the pictures, and we saw that everyone was proud of us in our country.

"We're disappointed for the Moroccan people, we wanted to keep the dream alive, but we're pleased with what we've achieved.

"We felt that we could have gone even further but these small details help real champions, which we saw [against France], of course.

"My players gave everything and they've gone as far as they could. I really wanted to rewrite the history books, but you can't win a World Cup with miracles, you need to do it through hard work."

Dalic is expected to make a few changes: Marcelo Brozovic is an injury doubt; Luka Modric could be given a breather. All three of their regular midfield probably won't come out of the side, meaning Kovacic is surely the likeliest to start.

Kovacic was one of Croatia's better players against Argentina, with his physicality and ball carrying standing out as the Valtreni tried to cope with the feisty Argentinians. He attempted six dribbles, completing four, and engaged in 15 duels, winning 10 – all of those were highs for his team. 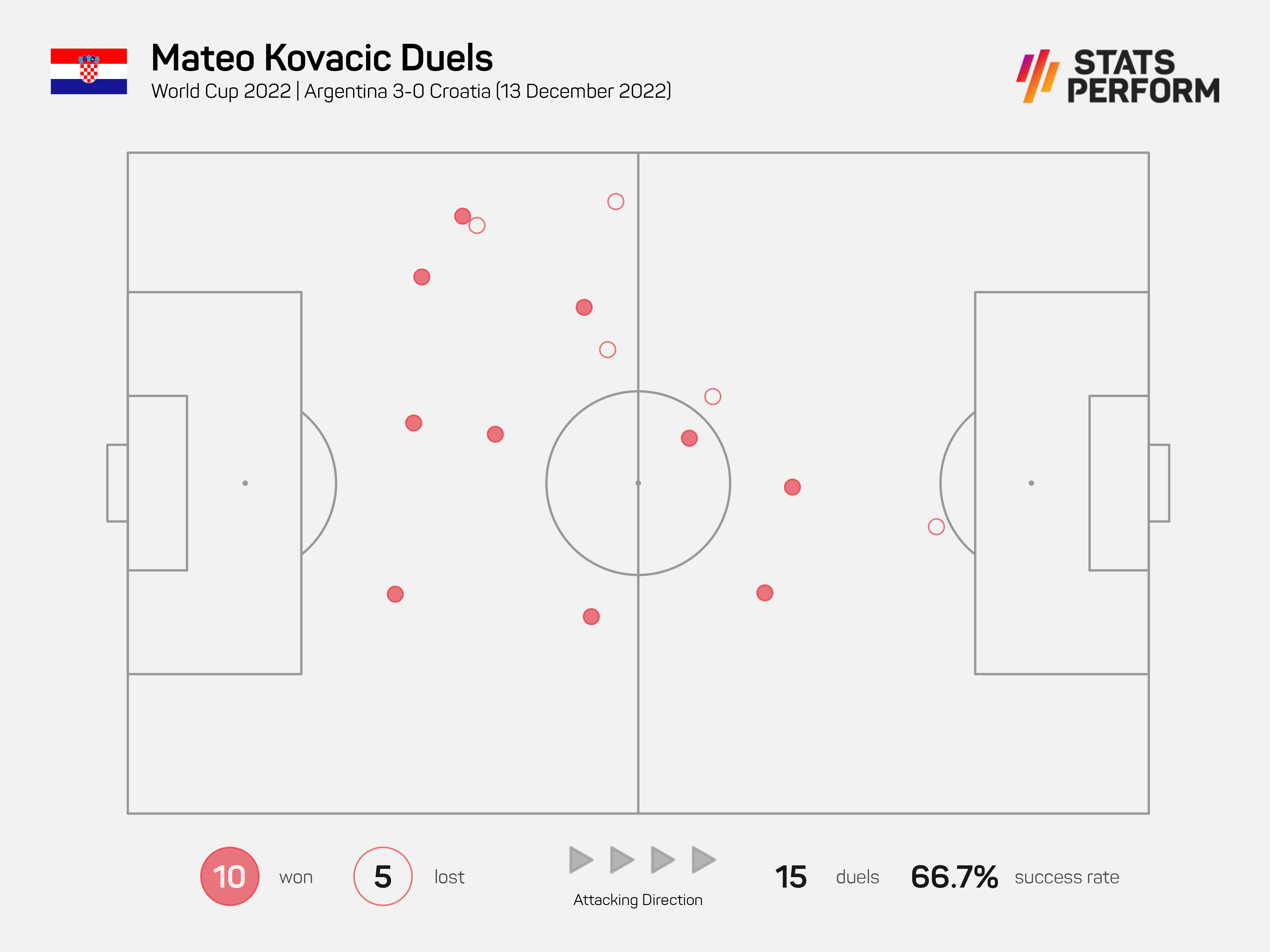 Again, Regragui will alter his team a bit, so it is difficult to know who's going to play, but all the neutrals will be hoping to get another glimpse of Ounahi.

An elegant central midfielder, the 22-year-old has been one of the tournament's breakthrough stars, with his composure in possession really making him stand out. He has completed 77 per cent of his take-on attempts in the World Cup (10/13), which is the highest rate of any player to try at least 10. 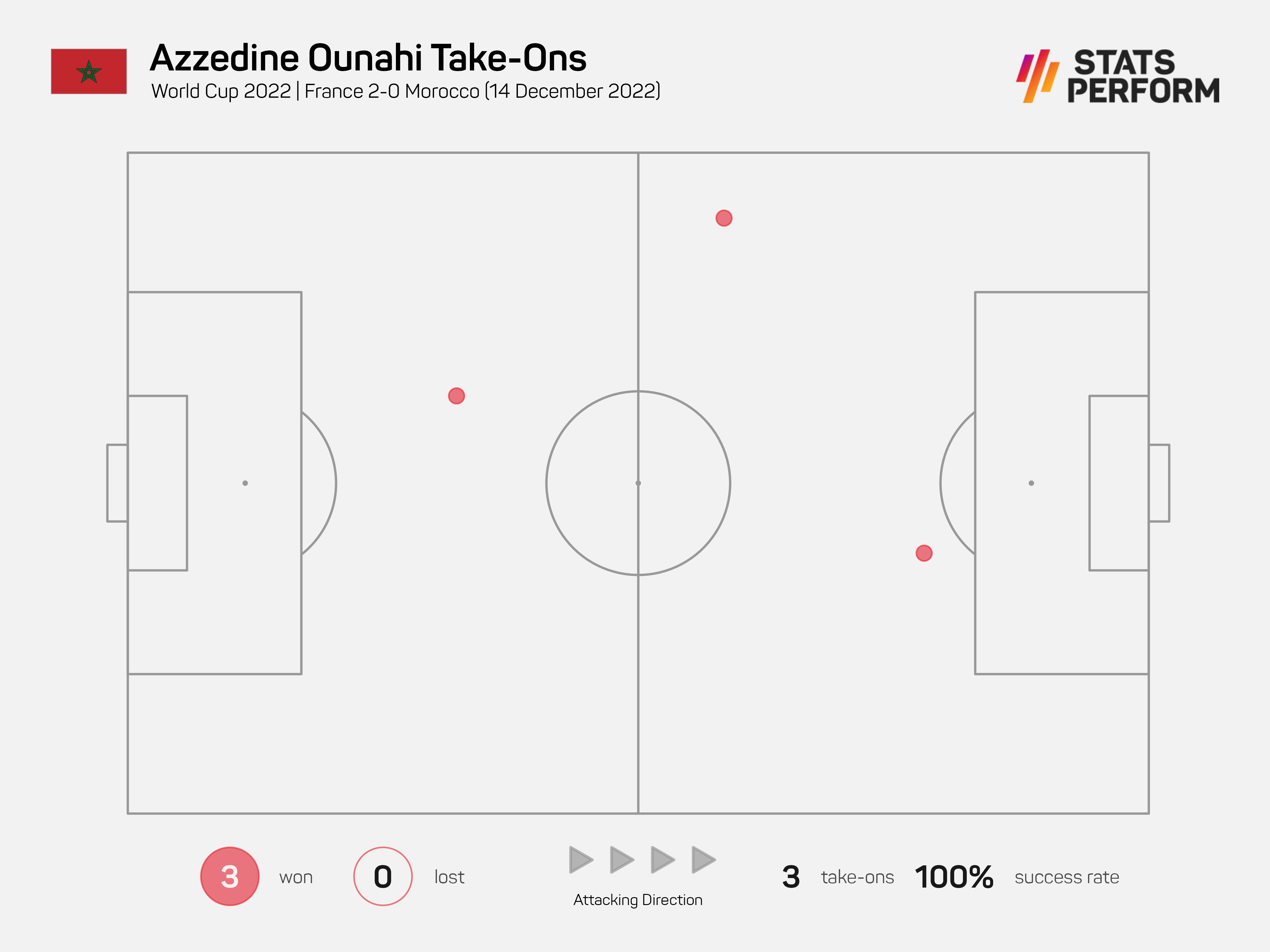 Morocco's win probability of 30.9 per cent for this is a reasonable increase on the 24.8 per cent Stats Perform's AI model gave them ahead of the matchday one meeting.

Nevertheless, Croatia remain the favourites, with the supercomputer putting their win likelihood at 43.1 per cent.

The draw is rated at 26 per cent, but it's worth noting that none of the 19 previous third place play-off matches at the World Cup have gone to penalties, while only one has been settled in extra time (France v Belgium in 1986).