Lionel Messi's long wait for major international honours with Argentina is finally over after playing a starring role in their Copa America triumph, winning the Player of the Tournament prize before the final was even played.

In the age-old – and some might say tiresome – 'greatest of all time' debate, the stick usually used to beat Messi with revolved around his lack of titles with Argentina, but that is no longer relevant and he also played a vital role for La Albiceleste.

It was also an important barrier that Argentina broke down as a team, winning their first major international title since 1993.

Messi's performances see him lead Stats Perform's Opta data-driven Team of the Tournament, and he is joined by some familiar names as well as those who enjoyed breakthroughs over the past month. 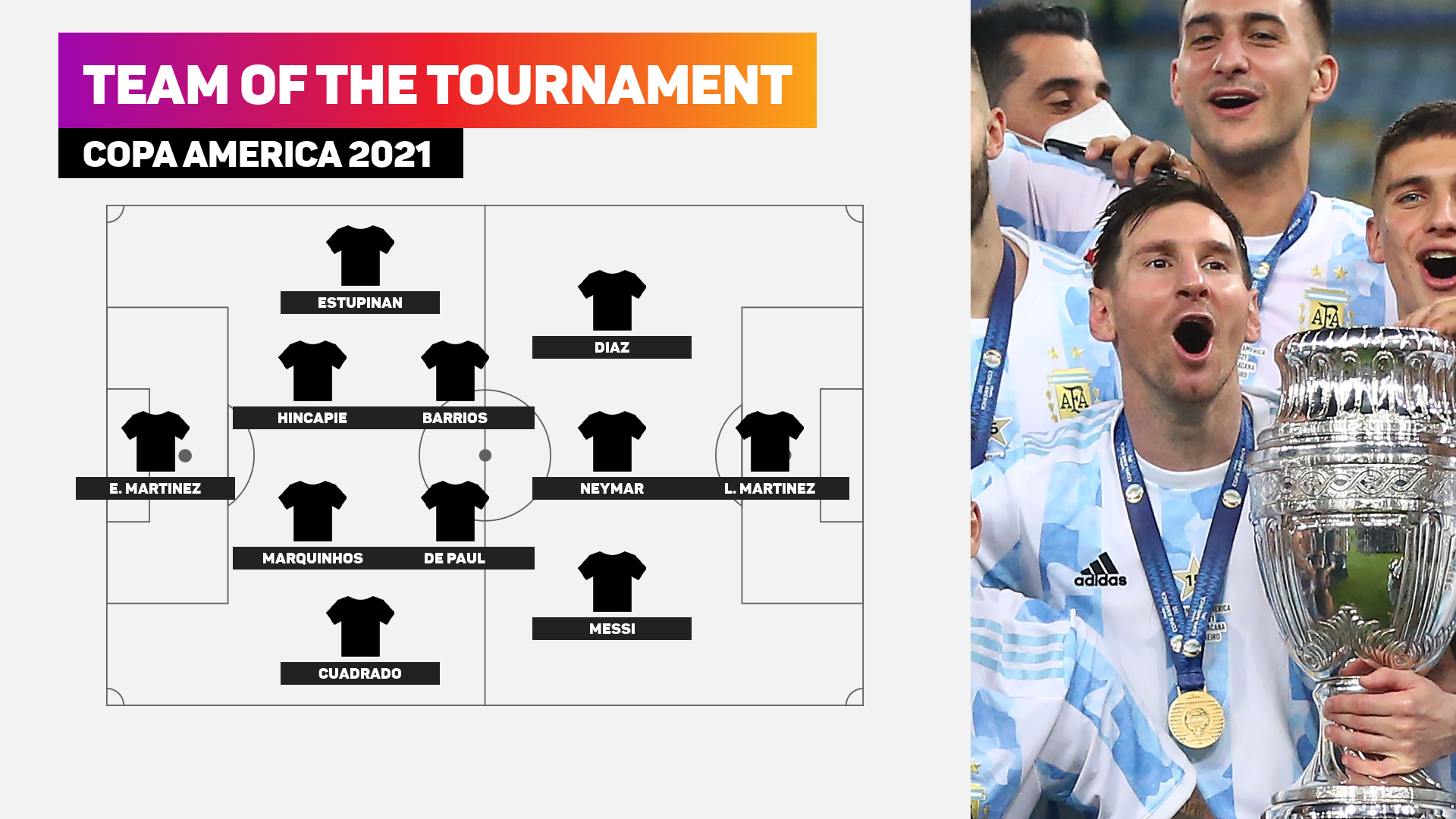 Aston Villa keeper Martinez has enjoyed a remarkable 18 months or so and it's fair to say his form at the Copa America has helped truly cement his place as Argentina's first choice between the posts. His personality proved vital in the penalty shoot-out win over Colombia in the semi-finals as he psyched out Yerry Mina, but he also showed his excellence by finishing with an 85.7 per cent save ratio that was the second best in the tournament, while his four clean sheets was the best tally.

Cuadrado can always be relied upon to provide some attacking impetus on the right flank and he certainly didn't disappoint in the Copa, his 18 chances created being the most for Colombia and among the top five of all players. The same could be said of his 22 open-play crosses, while Cuadrado also made 45 recoveries, the second most in Los Cafeteros' squad, highlighting how he was often in the right place to sweep up danger as well. 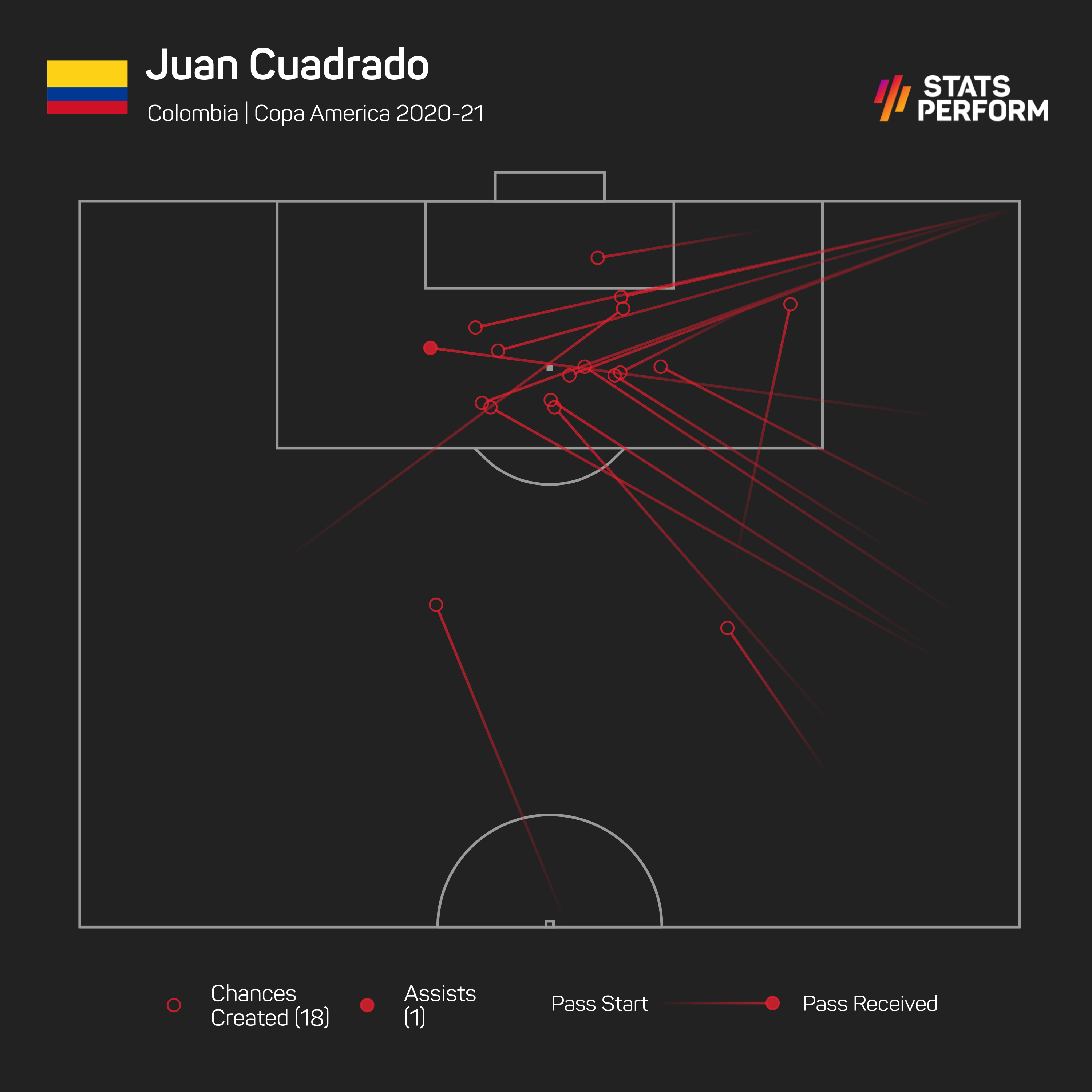 While Brazil ultimately fell short at the Maracana on Saturday, Marquinhos can leave the tournament with his head held high. His ability to bring the ball out from the back was routinely notable, as highlighted by the fact his 110 carries was bettered by only four players, all of whom are forwards, but he was also a commanding presence at the back, with his 2.8 aerial the most among Brazil players.

Still only 19, Hincapie showed real promise here. Granted, there were signs that he remains quite raw and naive, as demonstrated by some of his struggles against Argentina in the quarter-finals when he was sent off late on for tugging back Angel Di Maria. Nevertheless, the Lazio-linked talent averaged the most passes per game for Ecuador (52.2) and showed real positivity when in possession, carrying the ball 600.7 metres upfield over the course of the tournament, at least 44m more than any other centre-back.

Estupinan endured a somewhat underwhelming first season with Villarreal in 2020-21, but in the Copa he showed glimpses of the player that had impressed so regularly with Osasuna the season before. He was consistently a useful outlet on the left and his eagerness to create saw him average more crosses per 90 minutes (9.6) than any other player in the tournament, while his 2.4 key passes each game was the most of all defenders.

The all-action midfielder performed an important function as Colombia ultimately finished third in the Copa. Barrios was tidy in possession as he looked to keep Reinaldo Rueda's men ticking, completing 88 per cent of his passes, but he was also effective at regaining possession and recovering the ball as he started 76 open play sequences, which only Yoshimar Yotun and Casemiro could better.

Get ready to hear a bit more about De Paul over the next few years. While he's by no means an unknown given he's had a strong few years with Udinese, the midfielder is set to join Atletico Madrid and offers the blend of off-the-ball nous and technical ability that should see him thrive under Diego Simeone. His 32 ball recoveries led the way for Argentina while his six key passes was second only to Lionel Messi, with one of those being the glorious long-range pass to release Di Maria for the crucial goal in the final.

While he may have fluffed his lines at the end of the final, Messi's exploits throughout the tournament previously meant he could be forgiven for that. After all, without his unbeaten four goals and five assists – a high for the tournament – Argentina almost certainly wouldn't have reached the showpiece. He remains one goal behind Pele's record (77) for CONMEBOL nations, but he finally has his first trophy with Argentina, and that's what matters most. 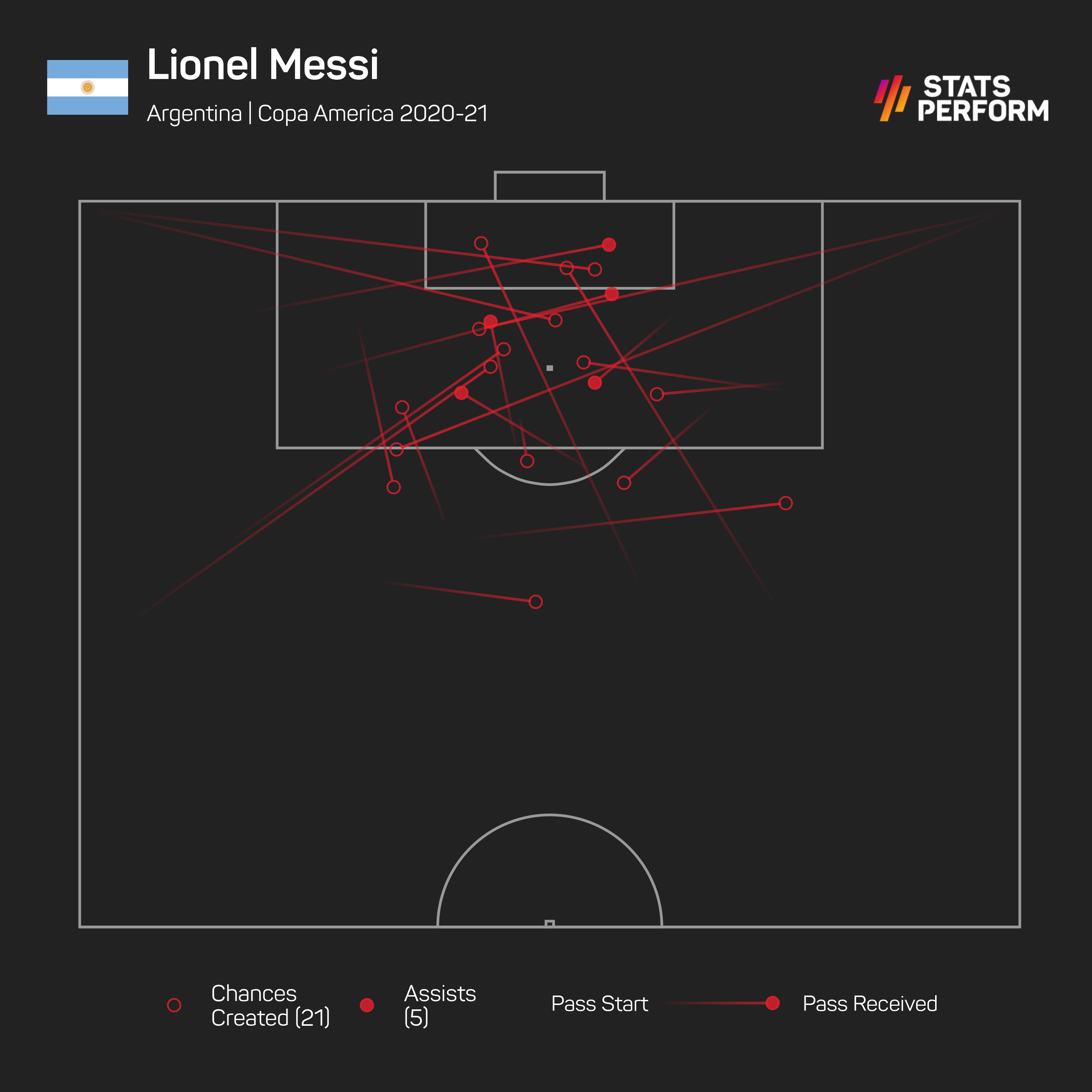 Neymar had a peculiar tournament in some ways. No one would suggest he was poor, because he was routinely the player that provided the spark for Brazil, as evidenced by his tournament-leading 3.5 key passes and 21.6 passes into the final third each game (among players with more than one match played), but he was also wasteful in front of goal, his one non-penalty goal from 5.3 xG giving him the worst xG under-performance (4.3) at the tournament. 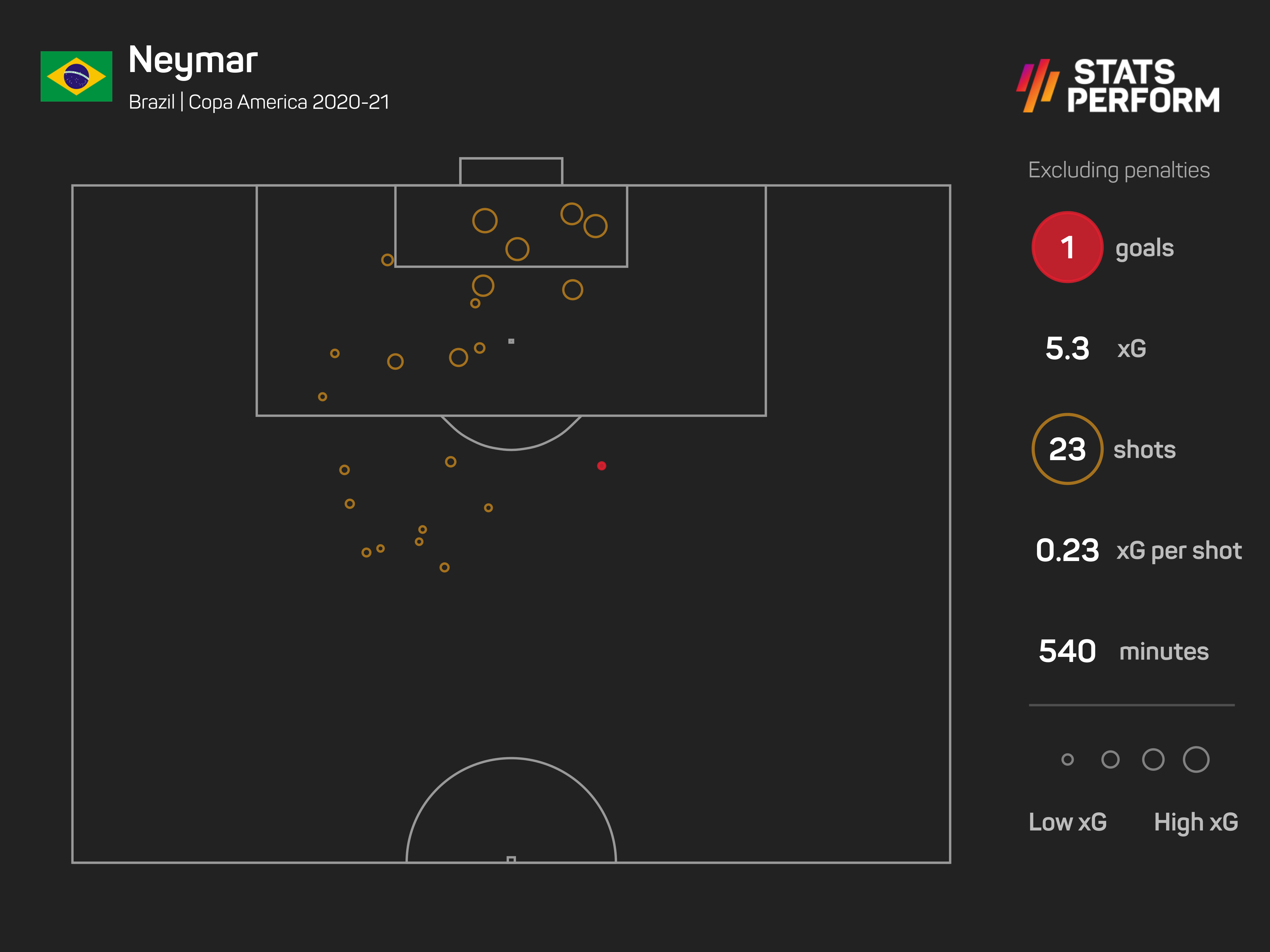 Porto's Diaz is an exciting player and showed as much for Colombia as they claimed bronze. He scored more non-penalty goals (four) than any other player and produced some spectacular finishes, such as his remarkable bicycle-kick against Brazil and 30-yard screamer to seal victory in the third-place play-off against Peru. His four goals came from just 10 shots, with that 40 per cent conversion the best among those with three or more goals. 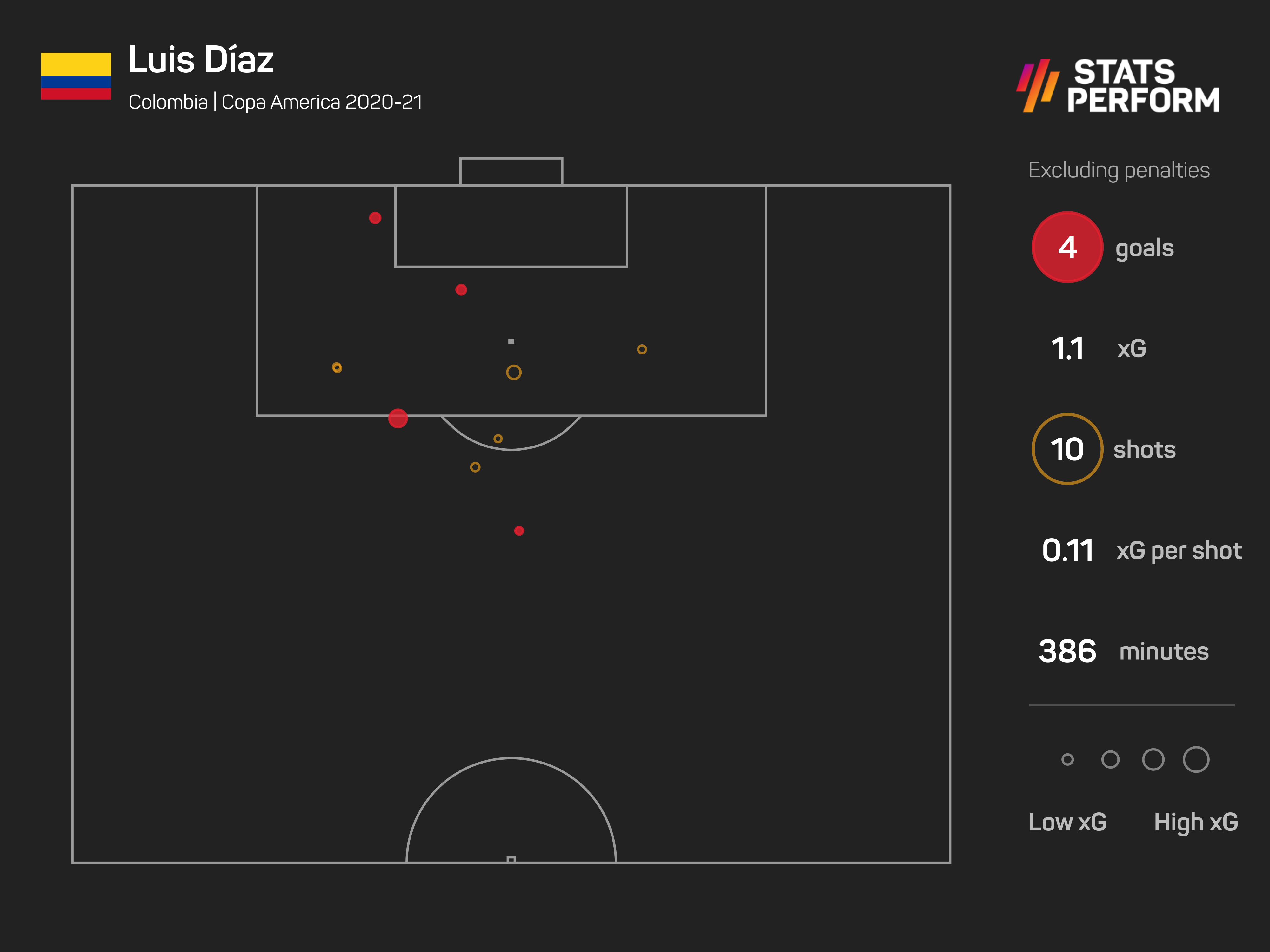 Despite the presence of Sergio Aguero, Martinez was the man generally chosen to lead the line at the Copa and he did fairly well as he netted three goals, with only Messi and Diaz getting more. While he was guilty of wastefulness at times, his three-goal haul was actually pretty close to his 3.3 xG, showing that for the most part he was dependable. Similarly, only two players averaged more shots on target per 90 minutes (players with more than one match played) than his 1.4. He also improved on his two goals from the 2019 edition, so he's seemingly going in the right direction.

Tite is likely to make changes for Brazil's Copa America clash against Ecuador, with their place in the knockout stage already secured.