Antonio Conte said Tottenham got a sniff of blood and moved in for the kill as they beat Aston Villa 4-0 in the Premier League.

Son Heung-min hit a hat-trick, taking him to 17 Premier League goals for the season, and winger Dejan Kulusevski was also on target at Villa Park.

Son has the most goals in the Premier League this season when penalties are removed from the count, given none of his strikes have been spot-kicks. Mohamed Salah's league-leading 20-goal haul includes five penalties.

Villa finished the game with a higher expected goals figure than Tottenham, 1.71 to Spurs' 1.02. That reflected the golden chances Villa spurned, particularly in the first half when Danny Ings, Ollie Watkins and Philippe Coutinho all threatened.

The statistic also spoke of Tottenham's ability to sniff a half chance and snatch a goal, which is something that delights Conte.

Earlier defeats for Arsenal and Manchester United meant Tottenham had a great opportunity to tighten their grip on fourth place, and Conte said: "We have to look to ourselves. I said this to our players: a strong team, a big team, doesn't depend on the others.

"We have to understand the moment when you have to kill your opponent. Today was an important moment, especially because of other results. It was good for us, but it was good because we won. If you don't win, the result of the other teams is not useful.

"The players know very well what I said. The winner has to feel when there is blood, the blood of your opponent, and then you have to kill your opponent.

"I think we are working very hard in many aspects. I'm lucky because I have a group of players that deserve the best because they show me great commitment, great behaviour every day.

"They want to improve, and to get these kind of results in a short time makes me very happy because I know that they are very happy." 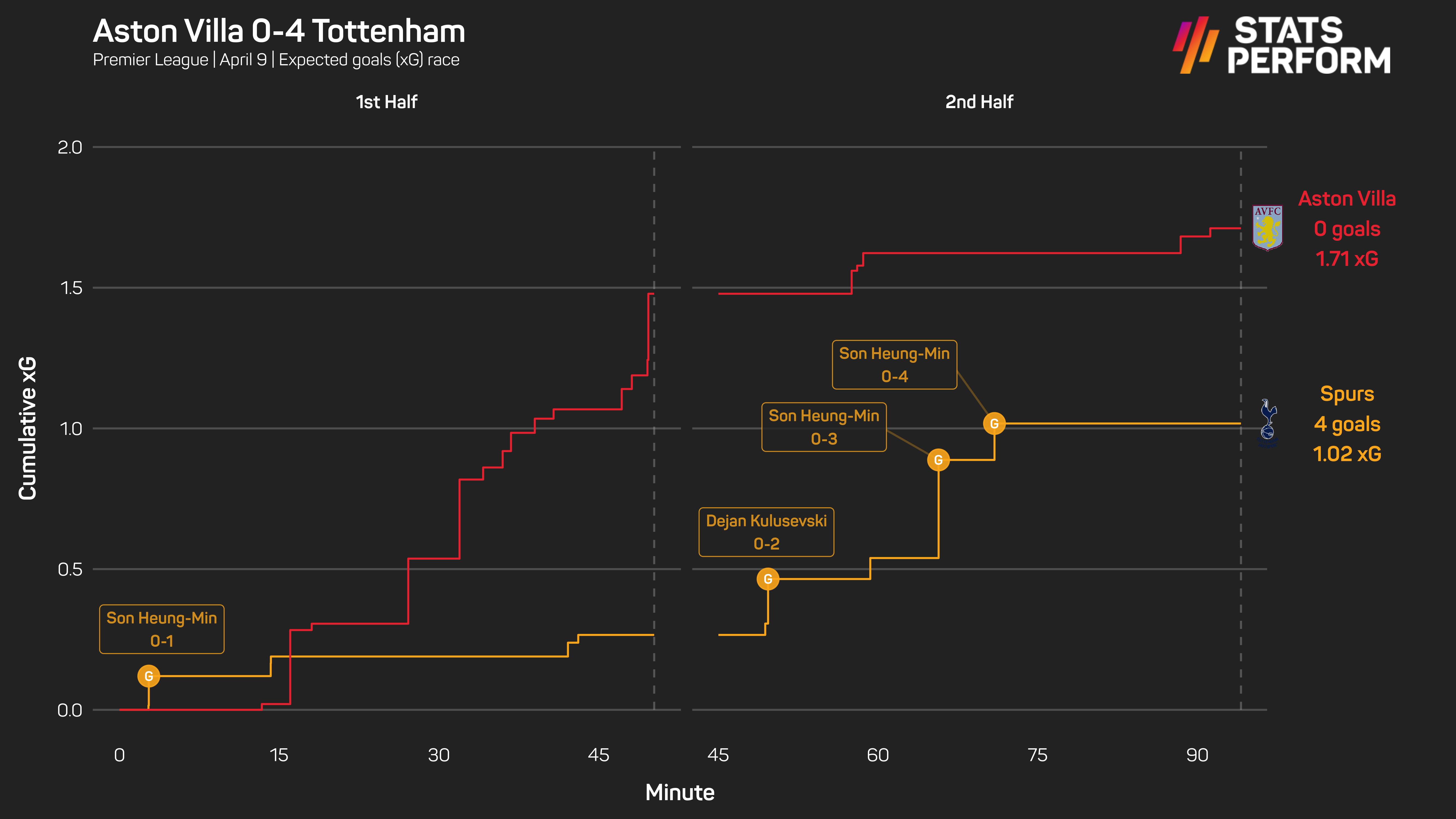 Tottenham have won six of their last seven games in the Premier League, after a previous rocky spell of results.

They have seven games remaining, including a big derby against Arsenal next month and a trip to title hopefuls Liverpool.

Tottenham appear to be growing all the time, and being able to set aside a sketchy opening 45 minutes, when Son's early goal gave them a lead they scarcely deserved by the break, showed a particular quality that pleased Conte.

Son, Kane and Kulusevski were unaffected by the battering Tottenham had taken, and came out for the second half determined to stamp a greater mark on the game.

"I think that the task of the coach is to try to exploit the characteristic of the players, to put the players in the best situation," Conte told Sky Sports.

"I think this formation is sweet for the characteristics of these players, and it is working very well. We're starting to work about the details. This is very important because don't forget that I arrived in November, not in pre-season. I think we have grown in an important way, and now we're showing that it's tough to play against us."

Son also spoke of the dynamic between the front three. Since Kulusevski's Premier League debut on February 9, only Kane (13) and Son (12) have been involved in more goals in the competition than the former Juventus winger (nine), taking all teams into account.

"It's all about understanding," said Son. "The first time we played together it wasn't perfect. We're still not perfect, but we improve every single day and enjoy playing together."

Phil Foden and John Stones were summoned to the Manchester City starting XI as Pep Guardiola looked to clinch another Premier League title.

Rumour Has It: Xavi clear out to begin at Barcelona

Barcelona are set to transform their squad now they have reached the end of the season, with a host of players reportedly on the way out.

Milan are two points clear of neighbours Inter heading into the final day, but Simone Inzaghi insists the Scudetto is not all that matters.

Though Liverpool begin the Premier League's final day as title outsiders, Trent Alexander-Arnold says their quadruple bid has been historic.

Steven Gerrard is a Liverpool legend, and his former club are hoping for a favour when his Aston Villa team face Manchester City.

Manchester City could be pipped by Liverpool on the final day of the Premier League season, but data offers scant encouragement to the Reds.

Claims Ilkay Gundogan had held talks with Real Madrid and was looking set to leave Manchester City came as a surprise to Pep Guardiola.

Phil Foden and John Stones were summoned to the Manchester City starting XI as Pep Guardiola looked to clinch another Premier League title.

Mohamed Salah and Virgil van Dijk are back in the squad for Liverpool on the final day of the Premier League, but Divock Origi misses out.