Colombia have a miserable recent Copa America record against Peru but are hopeful of ending their 2021 campaign on a high in the third-place play-off.

Los Cafeteros missed out on the final in agonising fashion, losing to Argentina on penalties in the semi-finals after edging past Uruguay by the same method in the previous round.

Meanwhile, Peru went down 1-0 to hosts Brazil, also the only opponents to beat them in the group stage.

Los Incas followed that first-round setback by beating Colombia 2-1 in their next match to take a giant stride towards the last eight.

That was a fifth consecutive Copa America meeting between the sides in which Colombia went away without winning.

And the defeat threatened to show their campaign in a different light, with prior results against Ecuador (1-0) and Venezuela (0-0) rather less impressive when they lost to Peru and Brazil back to back.

Coach Reinaldo Rueda was encouraged by the draws against Uruguay and Argentina that led to shoot-outs, however.

Rueda only returned to the role in January and oversaw a 3-0 defeat of Peru in his first match in World Cup qualifying.

Ahead of the third-place match, in which he will hope to repeat that dominant display and secure Colombia's first Copa America win over Peru on foreign soil, Rueda said: "Everything has been positive.

"This campaign is not over yet but it invites us to dream, to think that we are on the right path." 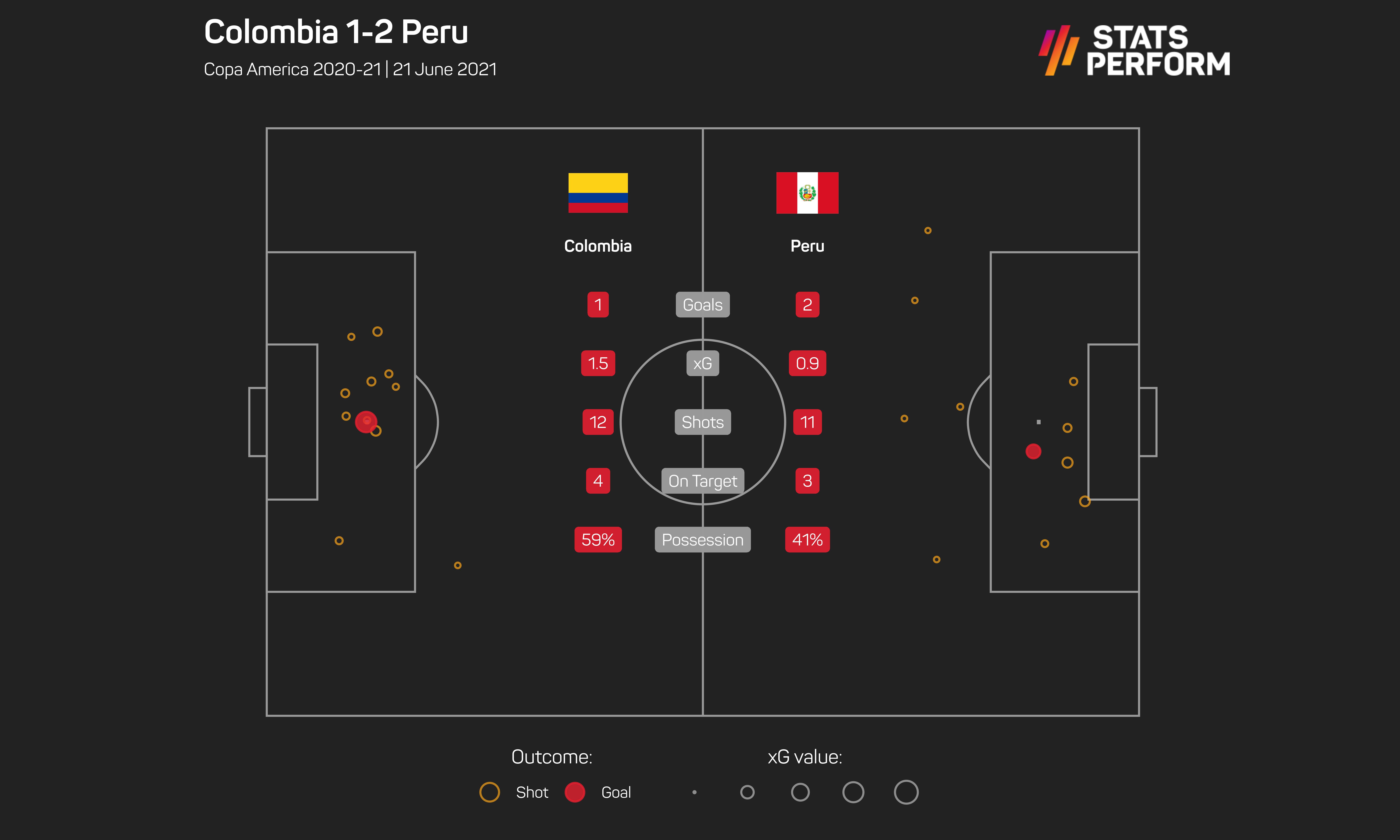 Centre-back Mina has rarely been out of the headlines at this tournament. He celebrated his successful penalty against Uruguay with an eye-catching dance, which was then mocked by Lionel Messi when he missed in the Argentina shoot-out.

Mina also scored the decisive own goal when Peru beat Colombia in the first round, although the Everton man otherwise impressed in that game with 12 recoveries, three clearances and three blocks, all over which were unmatched by any of his team-mates. He will hope this is a positive experience.

Former Milan forward Lapadula is the man Mina will be tasked with containing. When they last met, the one-time Italy call-up was still waiting on his first Peru goal, attempting two shots in that match and teeing up a further pair of opportunities.

Lapadula has since opened his international account, though, with goals against Ecuador and Paraguay en route to the last four.

– This is the first meeting between Colombia and Peru in the third-place play-off at the Copa America. Los Incas lost just one of the past 12 Copa America games against Colombia (W5 D6) and are undefeated in five (W2 D3).
– Under Ricardo Gareca, Peru's only Copa America defeats (excluding penalties) have come against host nations. Brazil, hosts in 2019 and 2021, have beaten Peru three times. Gareca is unbeaten in 16 matches against non-hosts.
– Colombia have beaten Peru just twice in 17 Copa America games (D7 L8). Their only wins were in games they played at home in 1975 and 2001. They have never beaten Peru on neutral ground in this tournament, although Colombia advanced on penalties after their draw in 2016.
– Colombia (105) and Peru (87) have committed the most fouls at this tournament. Colombia pair Daniel Munoz (16) and Wilmar Barrios (13) rank second and third among all players.
–  Only Venezuela (1.8) and Bolivia (2.5), the two sides eliminated in the group stage, have averaged fewer shots on goal per game than Peru (3.3) and Colombia (3.8) at the 2021 Copa America.

Luis Diaz scored twice as Colombia claimed third place in the Copa America with a 3-2 victory over Peru in Brasília.

Lionel Messi heaped praise on Emiliano Martinez, who was the hero in Tuesday's semi-final penalty shoot-out.

Martinez's heroics has Messi on cusp of coveted Argentina crown

Lionel Messi has another chance to claim his first international title with Argentina, who reached Saturday's final.

Argentina, eyeing their first title since 1993, prevailed against Colombia in a tense penalty shoot-out on Tuesday.

Argentina face Colombia for a place in the Copa America final and will be looking to star man Lionel Messi to inspire them once again.

David Ospina made two saves in the penalty shootout to send Colombia past Uruguay and into the Copa America semi-finals.

Uruguay seem to be finding their feet at the Copa America and the signs are promising as they bid to win a first title in a decade.

Controversy or not, Tite's Brazil train rolls on as legacy grows